Imogen Westfield and Robert Forster
Until the international powers stop their proxy wars, there will be no peace in Syria 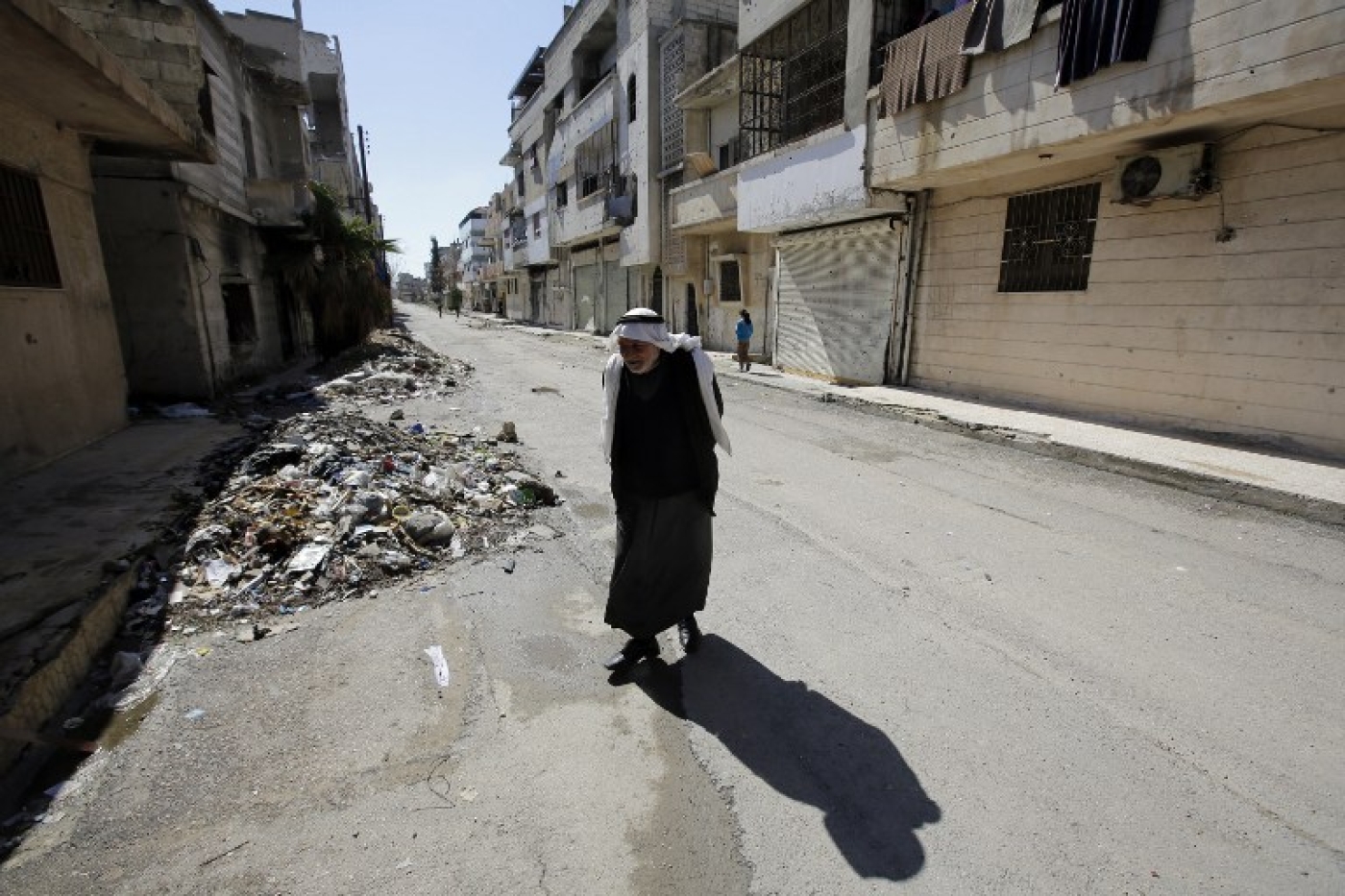 The withdrawal of 1,000 rebel fighters from Homs, once considered the “capital of the revolution”, has been seen as a significant step in Bashar al-Assad’s quest to regain control of Syria. Today’s presidential elections, serve to guarantee Assad another seven-year term as Syria’s leader. However, underlying such internal shifts is the influence of external powers that will ultimately determine the outcome of the Syrian war.

What initially began as domestic unrest has transformed into a proxy war fought by a multitude of actors. Regional powers, including Saudi Arabia and Iran, and international powers, Russia and the United States, have all become involved in a bid to influence the outcome of the conflict to benefit their own strategic interests. The internationalisation of the conflict highlights the importance of Syria’s regional role and its ability to influence regional political constellations. Given this ability, the war is likely to continue as external powers have a vested interest in the outcome.

The uprising that began in April 2011 was at first interpreted much like previous rebellions against the Assad regime. However, unlike the 1982 Hama massacre, the 2000 Damascus spring, the 2004 al-Qamishli revolts, and the 2005 Damascus declaration, the 2011 uprising included factors not present in earlier movements.

Encouraged by the revolutions occurring in Tunisia, Egypt, Libya and Yemen, the initial protests in the southern city of Deraa were a reaction against Assad’s heavy reliance on the intelligence services, the entrenched corruption that served the ruling elite, rising unemployment, economic modernisation without political reforms and a decline in state oil rents. Popular resentment was further exacerbated by the drought, which lasted from 2006 to 2011, which took a heavy toll on the agricultural sector.

According to IHS Jane’s, a defence consultancy, the political vacuum that ensued following the outbreak of war, has led to the establishment of more than a thousand opposition groups. These include Kurdish separatists, groups fighting under the banner of the Free Syrian Army (FSA), the Islamic extremist groups al-Nusra Front (an al-Qaeda affiliate) and the foreign-dominated Islamic State of Iraq and Syria.

Jihadi rebel groups such as al-Nusra have come to dominate the opposition. They have shown much success in recruiting fighters, as they have been well accustomed at capitalising on the rhetoric of “winning hearts and minds” by strategically providing humanitarian assistance and enforcing law and order in the areas under their control. As a direct consequence, the nature of the original uprising has become increasingly radicalised. This has instigated the transformation of the uprising from one of Syrian domestic discontent to a war capitalised by external forces.

The potential for the outcome of the Syrian war to change the regional balance of power has brought the main players in the area, such as Saudi Arabia and Iran, as well as the medium powers of Turkey and Qatar, to complete for sponsorship and influence among warring parties.

For Saudi the war represents an opportunity to further isolate Iran and dismantle the so-called Shiite-dominated “axis of resistance”, consisting of Syria, Iran, Hezbollah and Islamic Jihad - thus effectively terminating the complex military arrangement of this alliance. To capitalise off this, Saudi has been investing in nationalist and moderate factions of the FSA.

According to IHS Jane’s, “fear of regional isolation is very likely to encourage Saudi Arabia to keep supporting Salafist groups in Iraq, Syria, and Lebanon in the hope of extracting a better deal for itself that preserves some of its regional influence”. These fears have been exacerbated by the US-Iranian rapprochement, which was instigated in November 2013, and represents a significant challenge to Saudi’s role as a key regional US ally in the region. It also brings the US role as Saudi’s primary security guarantor into question.

While Saudi Arabia has been funding the FSA, Qatar has been supporting the Muslim Brotherhood in Syria, a long-time regional ally dating back to the 1960s. Turkey is also active in its support for the increasingly insignificant Syrian National Council, which Ankara perceives as a strategic counter-balance to Kurdish separatist ambitions due to the groups’ non-compliance with Kurdish claims for self-autonomy. This web of inter-state sponsorship has acted to greatly contribute to the longevity of the conflict, the fragmentation of the opposition and the civilian death toll.

Iran, on the other hand, has been instrumental in keeping Bashar al-Assad in power. According to Adham Saouli, lecturer in politics and international relations at the University of Edinburgh, Syria serves the Islamic Republic as “a corridor that facilitated the rise and consolidation of Hezbollah’s power in Lebanon”. Thus Syria plays a key role in the facilitation of political and military activities of Iranian power in the Middle East’s “axis of resistance”.

Iran’s, and by extension Hezbollah’s, fear in losing influence in Syria mirrors Saudi Arabia’s fear of isolation in the Arab world. John Calabrese, at the Middle East Institute in Washington DC, contends that the potential emergence of a Sunni-dominated leadership in Damascus would eventuate in “the possible fatal weakening of the Tehran-Damascus-Hezbollah axis and with it, the diminishment of Iran’s ability to project its influence”.

For Hezbollah, losing Syria as an arms conduit could make the group more vulnerable to attack by Israel and Sunni groups. Furthermore, according to Saouli, possible Sunni “Islamist” leadership in Syria could result in a similar regime being exported to Lebanon. Such an outcome could result in the weakening of Hezbollah’s influence in Lebanon and its possible alienation and collapse. This is at the core of Hezbollah’s continued support of Assad’s fight for state control, since Hezbollah’s very survival may be decided by the outcome of the Syrian war.

On the international level, Russia has been integral in abetting the survival of Assad. Firstly, Moscow sympathises with Assad’s struggle to maintain power in the face of radical Islam, thus reflecting Russia’s own domestic threats in Chechnya. Secondly, Russia’s 40-year robust alliance with Syria has significant cultural ties. There are approximately 100,000 Russians living in Syria, many of whom have become victims to Sunni attacks. Thirdly, Russia’s only naval base outside of their borders is located in Syria’s Port of Tartus, which maintains Russia’s strategic foothold in the Mediterranean and access to the Middle East. Lastly, the strong commercial ties between the two states has become increasingly important, as regime changes in Egypt and Libya have considerably weakened Russia’s exporting capabilities. Arms exports have risen under Assad’s leadership, accounting for $4.7bn between 2007 and 2010. In addition, Syria has been a significant target of foreign direct investment by Russia.

In contrast to Russia’s open support of Assad, the United States has vacillated on the subject of intervention in Syria. Similar to Russia, the Syrian war poses significant threats and opportunities to the US’s strategic interests and alliances in the region. Most importantly, a favourable change in leadership could benefit the US’s greatest regional ally, Israel.

Since the early 1990s, the US has unsuccessfully tried to orchestrate a rapprochement between Israel and Syria. It is the US’s belief that the development of a peaceful relationship between Syria and Israel would result in greater stability in the region. In effect such a partnership could end Hezbollah’s armed conflict with Israel, achieving amicable relations on all of Israel’s borders. Such a scenario would bolster US influence in the Arab world, and ensure Israel’s continued stability. However, despite the opportunities presented, the United States has so far hesitated in taking military action, as political ramifications of intervening outweigh benefits.

Conscious of blowback, the US has been hesitant to intervene in a war that has been hijacked by foreign rebel groups. Lessons from Iraq and Afghanistan have taught policymakers in Washington the negative implications of intervening without a firm grip on the situation at hand - an aspect that has weakened US regional dominance. Lack of on-the-ground intelligence and the complicated shifting allegiances amongst Syrian factions have been cause for hesitation by Washington’s policymakers. The decline of the SNC as a key actor has also led the US to retract its initial calls for Assad’s removal.

These shifts in policy have caused incongruence between Washington’s rhetoric and actions, which has been best illustrated by the lack of response to the use of chemical weapons by Assad’s forces in Ghouta in Autumn 2013. Despite his previous warnings against the use of chemical weapons, President Obama was forced to backtrack. This retraction by the US has unfortunately been coupled with the weakening of moderate factions in the Syrian opposition.

Bashar al-Assad’s words from 2011 appear to have been realised: “Any problem in Syria will burn the whole region … if the plan is to divide Syria, that is to divide the whole region.” Despite the recent withdrawal of rebel fighters from Homs and today’s presidential elections, such domestic changes are unlikely to change the overall fate of the conflict. The Syrian war poses greater regional and international ramifications than both the Lebanese civil war and the more recent Iraq war. The war’s potential to affect regional political constellations and spread across its borders into neighbouring countries threatens the entire stability of the region. Given this liability, domestic, regional and international actors will continue to fight and prolong this bloody war.