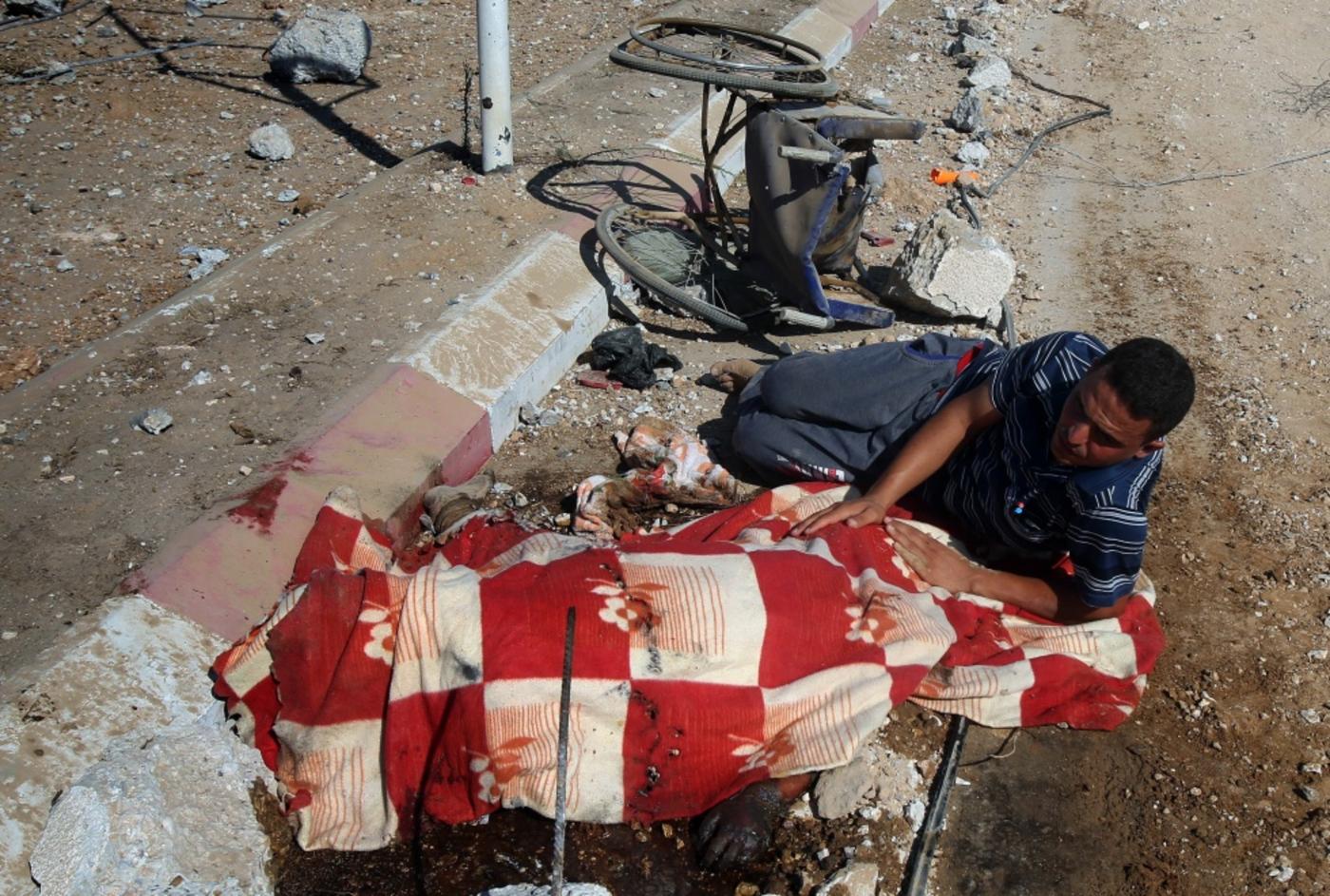 The Givaati Brigade was never considered one of the elite forces of the Israeli Army, nor one of its most prestigious units. Sayeret Matcal, the commando unit which freed the hostages in Uganda in a heroic operation in 1976 or the Paratroopers Brigade founded by Ariel Sharon some sixty years ago, are much more famous. But there is little doubt that it is the Givaati Brigade which made history in the last operation in Gaza: an Israeli brigade whose commander declared that his soldiers were fighting in the name of God, maybe for the first time since King David fought his wars against the Philistines.

This is not merely a spiritual matter. The Givaati Brigade fought in the southern part of the Gaza Strip where the most brutal war scenes of destruction took place. Large parts of the village of Khuza'a,  taken over by the Givaati in the first days of the fighting, were razed to the ground. Dozens of its inhabitants were buried under ruins and Palestinian eyewitnesses claimed that their relatives were executed at point-blank by soldiers. More than 150 Palestinian civilians were killed in the city of Rafah after a mass shelling of an entire neighbourhood. This shelling was done in response to the alleged kidnapping of a Givaati officer.

Even before the ground operation began, the Givaati soldiers knew that they were going on some sort of holy war. Their commander, Colonnel Ofer Winter, a graduate of the prestigious rabbinic school Eli Yeshiva in the West Bank, told them so.  "History has chosen us  - he wrote them  in a letter on 9 July  - to spearhead the fighting against the terrorist Gazan enemy which abuses, blasphemes and curses the God of the armies of Israel," a direct allusion to David's battle with Goliath.

To make his point clear, he added a quotation from Deutoronomy (20, 4): "For the Lord your God  goes with you to fight for you against your enemies, to save you." Winter must have known that that this is the chapter in which a distinction is made between a "war of choice"  and "obligatory war," the latter demands not to leave a living soul, not even women and children, while fighting against cities in Eretz Israel. Gaza is among these cities.

As Winter was fighting in God's name, God - according to Winter - interfered in the battlefield itself. In an interview for an Orthodox weekly, Winter recounted that the attack on the village of Khuza'a was scheduled before dawn, but the main force had been late in their arrival, so there was the risk his forward line of troops would have been exposed. "Then suddenly we were protected by clouds. Clouds of honour,” he said, alluding to the clouds sent by God to hide the Jews while flying from the Pharaoh. Only when his soldiers finished exploding the village houses, did the clouds fade away. It was the biggest miracle he had ever witnessed, concluded Winter.

There is no doubt that the presence of religious elements within the Israeli Army (Zahal) has been felt much more in recent years. In the army's academy for officers, some 40 percent of cadets come from national-religious backgrounds. The majority of them attend learning institutions such as the pre-military Yeshiva, similar to the one Winter graduated from.

Until some 30 years ago, the higher command consisted mainly from secular Israelis, with a strong presence of officers from the kibbutzim movement. But from the controversial 1982 Lebanon War and onwards, the new generations of the Israeli old elites, defined broadly as Ashkenazy (with European origins) and secular, started losing their appetites to join combat units. Their places are being taken by Mizrahi (origin in Arab countries) and religious Jews, mostly coming from provincial towns or from the settlements.

There is fierce debate between researchers as to how much this shift has influenced Zahal and its behaviour. Some say that this is a normal process, reflecting the demographical changes in Israel itself and that it does not have an effect on the goals of the army or on the way it acts. Others expect that this process may even lead to an army rebellion led by religious officers against the political secular leadership. It certainly raised many questions as to how an army, composed of so many religious officers, would behave when and if an order were to be given to withdraw from parts of the West Bank, where these same officers live.

During Operation Cast Lead in 2008, it was reported that rabbis were preaching to soldiers before going into battle that their war was a holy war. A leaflet distributed by the Military Rabbinate forbade renouncing even one millimetre of Eretz Israel and claimed that "cruelty against the enemy is sometimes a good virtue."

Winter has turned what seemed to be isolated cases and undercurrent trends into an official military strategy. His soldiers followed him with enthusiasm. Rabbi Moshe Hager, a veteran colonel himself, visited the troops during Operation Defensive Edge. His impression was that the above-mentioned demographical shift had "changed the spirit of fighting" in Zahal, and eventually it led to intensifying the levels of Israeli fire. The inhabitants of Khuza'a and Rafah and Shejaiya certainly felt that change.

Shimon Riklin, one the leading activists in the young generation of the settler movement, told Middle East Eye that Winter’s actions and words are "a revolution which we cannot underestimate its importance." Winter, according to Riklin, made a huge step forward. Instead of praying for God to keep his soldiers safe or begging God to give him victory, Winter himself decided to fight the war of the Lord. "Winter did not say let's pray, he said let's go to war in the name of the Lord,” comments Riklin. "This is one step towards the fulfilment of the vision of the prophets."

Riklin says that he is very happy with Winter's words, but he understands those who are afraid of them. Even within his own camp, the national-religious camp, there some who do not understand the full meaning of the words. But Riklin has no doubt that this is the direction the Army is moving in, and this is the direction that Israeli society is heading. "When a high-level commander speaks about fighting [in the] Lord's name, he is really speaking about Redemption. This is a dramatic step."

Riklin maybe takes Winter's words to an extreme, but there is little doubt that many within the national-religious camp share a similar feeling. Various speakers interviewed in Besheva, a weekly magazine representing the more conservative wing of this camp (where Rabbi Hager quotes are taken from), were confident that Winter’s  "spirit" represents the vast majority of Israeli combat soldiers.

Despite some criticism from a leading Israeli columnist, they seem to be right. In a large article in the popular Yedioth Ahronoth newspaper, Winter was described as the most charismatic military commander of the last war.

This shift certainly has its political consequences. Naftaly Benet, the head of the "Jewish Home" party and an outspoken Cabinet member in favour of "crushing" Hamas, has skyrocketed in the polls. The latest polls give him 19 seats in the Knesset against the 12 seats he has today, making him the second largest party in the Israeli parliament.

Riklin, like many others, is confident that in the next election Benet will have more seats than in Netanyahu's Likud party. An Israeli agreement with Hamas, which will almost certainly be depicted as a surrender, will probably only strengthen Benet's position within the public.

There is no doubt that Benet is striving to be Israel's next Prime Minister and that he believes he is on the right path there. Up until now it seemed almost impossible that Israel, still mainly a secular society, would elect a practicing Jew to be its Prime Minister. But with the help of God, so present in the last war, anything is possible.