The French citizens complicit in the Israeli policy in Palestine

Thomas Vescovi
The French are among the largest contingent of volunteers in the Israeli army, but if the Palestinians take Israel to the ICC that could change 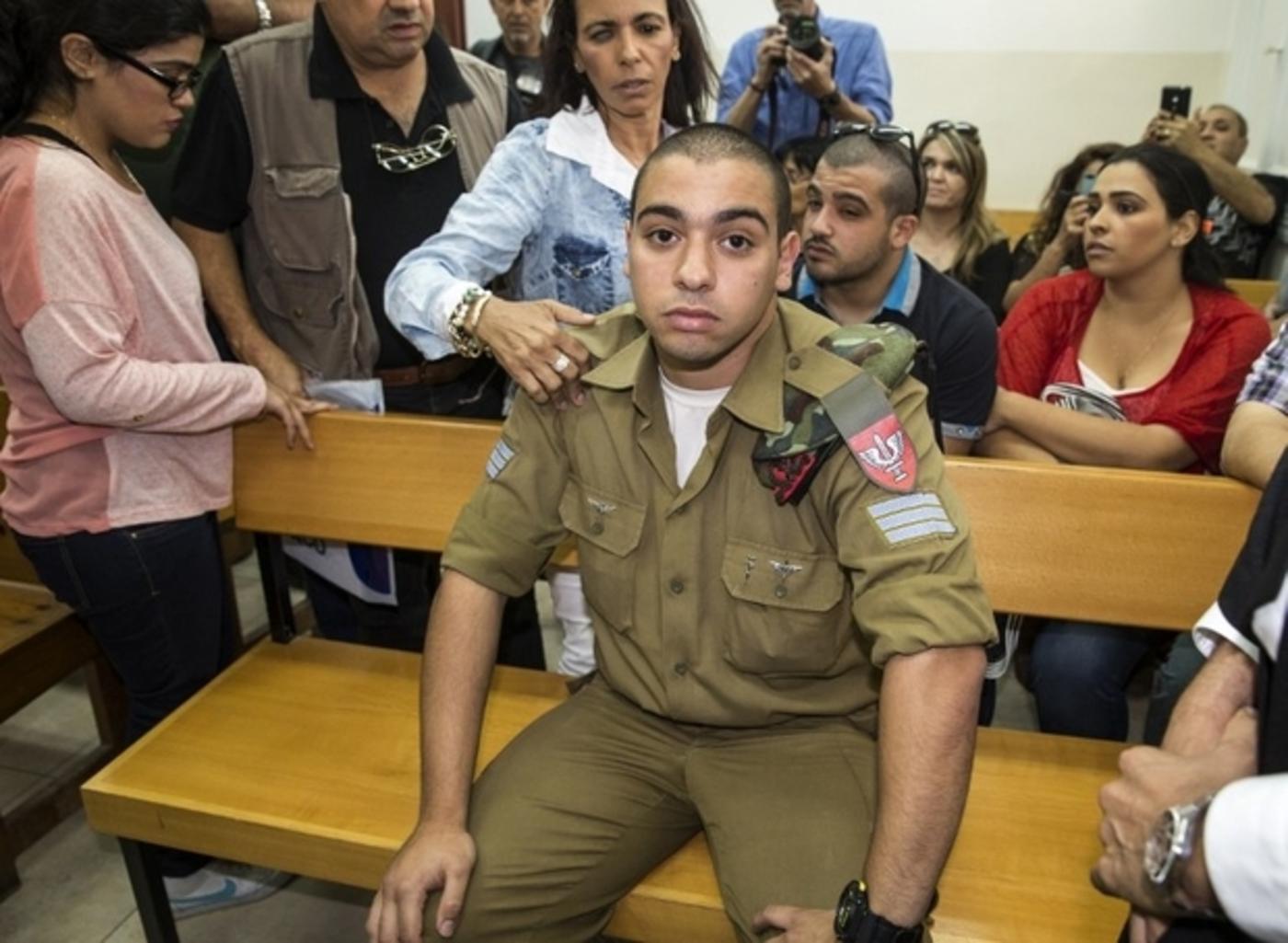 On 4 January, Franco-Israeli Elor Azaria, a sergeant in the Israeli army, was found guilty by a military court of voluntary manslaughter.

On 24 March 2016, he was filmed shooting Abdel Fattah al-Sharif, a 21-year-old Palestinian who had just participated in a knife attack on Israeli soldiers near the settlement of Tel Rumeida, in Hebron. Al-Sharif was lying on the ground, shot and wounded, when Azaria shot him in the head and killed him.

The ruling is once again fuelling debate on the participation of French citizens in the Israeli army.

'Give your time for the IDF'

There are five voluntary programmes for foreign citizens who wish to enlist alongside the Israeli army. The only condition is to be recognised as "Jewish," a criteria defined by the State of Israel. These programmes include Hebrew learning, physical training and training on the history of Israel and Zionism.

The Sar'El programme recruits volunteers from the age of 16 years to work in a military base for a maximum of three weeks. Tasks include preparing meals for soldiers, first-aid kits, and cleaning military equipment.

The Marva programme recruits volunteers between the ages of 18 and 24 who wish to "know and experience life in a military base".

Young volunteers are paid the same wage as other military personnel, but are not taxed. Several organisations also offer food and accommodations

Three other programmes enable participants to wear the uniforms and weapons. One of these programmes, Mahal, was created in May 2010 and recruits boys between 18 and 23 years of age and girls between 18 and 20 for a military engagement that can last between 14 to 18 months.

The main mission of this programme is to accompany "lone soldiers," who are volunteers without family ties in the country or Israeli nationality. On its website, Mahal claims to have helped more than 350 young people from all over the world, including French youth. Assignments vary according to individual medical profiles and physical abilities. All regular units are accessible except elite troops.

Anyone who is afraid to enlist alone can join Garin Tsabar, another programme that offers progressive enrollment, starting with a collective life in a kibbutz before being assigned to a unit.

The last programme is for students: Atouda allows them to continue their studies in an Israeli school and to do the training during holidays. The army pays for university fees up to $2,195 annually. When they finish their studies, the students complete their three-year military service for both boys and girls.

Among the proposed benefits, the young volunteers are paid the same wage as other military personnel but are not taxed. Several organisations also offer food and accommodation.

Most volunteers are coming from France

Several reports have already established the presence of French citizens in the Israeli army. According to "Le Nouvel Obs," the Mahal programme had nearly 500 French participants during the Israeli operation against the Gaza Strip in the summer of 2014.

One of them, Jordan Bensemhoun, was killed in Shujaiya in Gaza. MPs Jean-Jacques Candelier (communist party) and Pouria Amirshahi (formerly socialist party) immediately questioned the government about possible legal proceedings against them and about the activities of these young people who "fuel tensions between peoples and import [... ] a conflict that endangers national unity".

But there are many examples. On 30 October 2015, a French-Israeli soldier, Alison Bresson, executed 19-year-old Qasem Saba'aneh at a checkpoint on the Nablus road and seriously injured 17-year-old Fares Al Na'asane. In 2016, she was invited to light one of the 12 traditional torches for the Israeli national holiday celebration, Yom Ha'atzmaout.

The French Ministry of Defence relies on a convention signed on 30 June 1959 and published in the official journal on 19 December 1961, outlining an agreement between the Israeli government and French authorities on the authorisation of military service for dual nationals. However, volunteer soldiers do not have Israeli citizenship. They are French and, therefore, cannot benefit from the protection of this convention.

Moreover, Article 2 of an administrative arrangement of 20 March 1963, published in the French government’s official journal, testifies that in order to be recognised as a "permanent resident" in Israel, one must reside "in the territory where the Israeli law is applied".

In other words, this arrangement does not recognise the right of French citizens possessing Israeli nationality to perform their military service in Israel if they reside in the occupied Palestinian territories. Even if Israeli martial law applies in these territories, the occupation remains illegal under international law.

It seems impossible to get accurate figures on volunteers. France is regularly mentioned as one of the countries with the highest number of volunteers. According to i24 News, an Israeli news channel, in 2014, the Israeli army had 3,384 foreign volunteers, of whom 70 percent were men. One quarter were from the United States and the rest were from different countries, including France.

Beyond volunteers, other questions concerning French complicity in Israeli policies should be asked. In 2016, the number of French residents of Israel was estimated at 150,000. Among them, between 15,000 and 20,000 live in illegal settlements in the West Bank, participating with impunity in the dispossession of Palestinian lands.

On 10 March 2016, Nathalie Goulet, a senator for Union of Democrats and Independents, asked a written question to the Secretary of State for Budget Christian Eckert about a tax loophole enabling French citizens to donate to the Israeli army. She received death threats on social media but no response from the government.

A real sense of insecurity

Given the cases of Ilan Halimi (a French Jewish man who was kidnapped and tortured to death in 2006), the attack of Mohamed Merah against a Jewish school in Toulouse and that of Amedy Coulibaly against the Hyper Cacher kosher market in Paris, participants in these voluntary programmes express a real feeling of insecurity in France and prefer to withdraw into their communities.

The French Jewish community seems to be caught between several dynamics. On the one hand, although a significant proportion of Jews in France do not feel a particular anchorage in the Middle East, the political atmosphere constantly links them together.

When the Representative Council of the Jewish Institutions of France (CRIF) unconditionally defends the Netanyahu government, its leaders reinforce the idea of ​​a link between the Israeli policy and the French citizens of Jewish confession.

Some events reinforce this idea, such as the information meeting on volunteering in the Israeli army that took place at the Great Synagogue of Victory in the 9th arrondissement of Paris on 26 May 2014 - for the most undecided, the attending officer offered individual appointments at the Israeli embassy.

When someone justifies attacks on Jews in France on behalf of the Palestinian people, that reinforces the idea, in the minds of some in France's Jewish community, that they face the same threat as Israeli citizens

At the time, a majority of MPs strongly rejected the definition. The notion of citizenship, they believed, refers to a legal status which confers rights and duties and establishes a nation of equal people in a territory where they are sovereign. Indeed, the state could not both belong to individuals who are not its citizens, while others who are citizens but non-Jews would be clearly regarded as outsiders.

Now, the Netanyahu government is using this rhetoric, taking advantage of any attack against Jews around the world to call on them to move to Israel.

These elements serve Israeli political interests by enabling the comparison between anti-Semitic acts in France and those in the Israeli-Palestinian conflict. In other words, when someone justifies attacks on Jews in France on behalf of the Palestinian people, that reinforces the idea, in the minds of some in France's Jewish community, that they face the same threat as Israeli citizens.

This way of thinking erases all the strictly nationalist motivations of the Palestinian fighters. Thus, colonisation, occupation, child imprisonment - all the injustices perpetrated by the Israeli government against the Palestinian population - are perceived, at best, as a "minor evil" for the security of the Jewish people and, at worst, as confirmation of the inalienable rights of these people on the "Promised Land".

What about international law?

The colonisation of occupied Palestinian territories, the military occupation and its consequences in terms of arbitrary arrests and humiliation, the construction of a eight-metre high wall over a hundred kilometres, the blockade on the Gaza Strip - all these facts are unambiguously condemned under international law.

During the Israeli military operation on Gaza in the summer of 2014, Amnesty International denounced "war crimes". On 23 December 2016, the UN Security Council condemned Israeli settlements in the West Bank and Jerusalem.

In this context, no one doubts that every individual who engages in the Israeli army invariably becomes an accomplice of these injustices. In other words, the individual is an outlaw with regards to international law.

On 1 April 2015, Palestine became the 123rd member of the International Criminal Court (ICC). The prospect of an investigation and a trial on settlements or the crimes of the occupation is thus conceivable.

In addition to the need for French political decision-making on these violations of the law by Israel and on the involvement of French citizens, a condemnation of Israel before the ICC would reinforce the requests for trials against them.

- Thomas Vescovi is a teacher and researcher in contemporary history. He is the author of Welcome to Palestine (French, Kairos, 2014) and The Memory of the Nakba in Israel (France, L'Harmattan, 2015).

Image: The French-Israeli soldier Elor Azaria, convicted by a military court of intentional homicide on 4 January, attends a hearing in April 2016 before the Tel Aviv Military Court of Appeal (AFP)