Azouz Begag
Politicians have seized upon fear and hatred that it inspires among voters, but by stigmatising Islam, we empower extremism 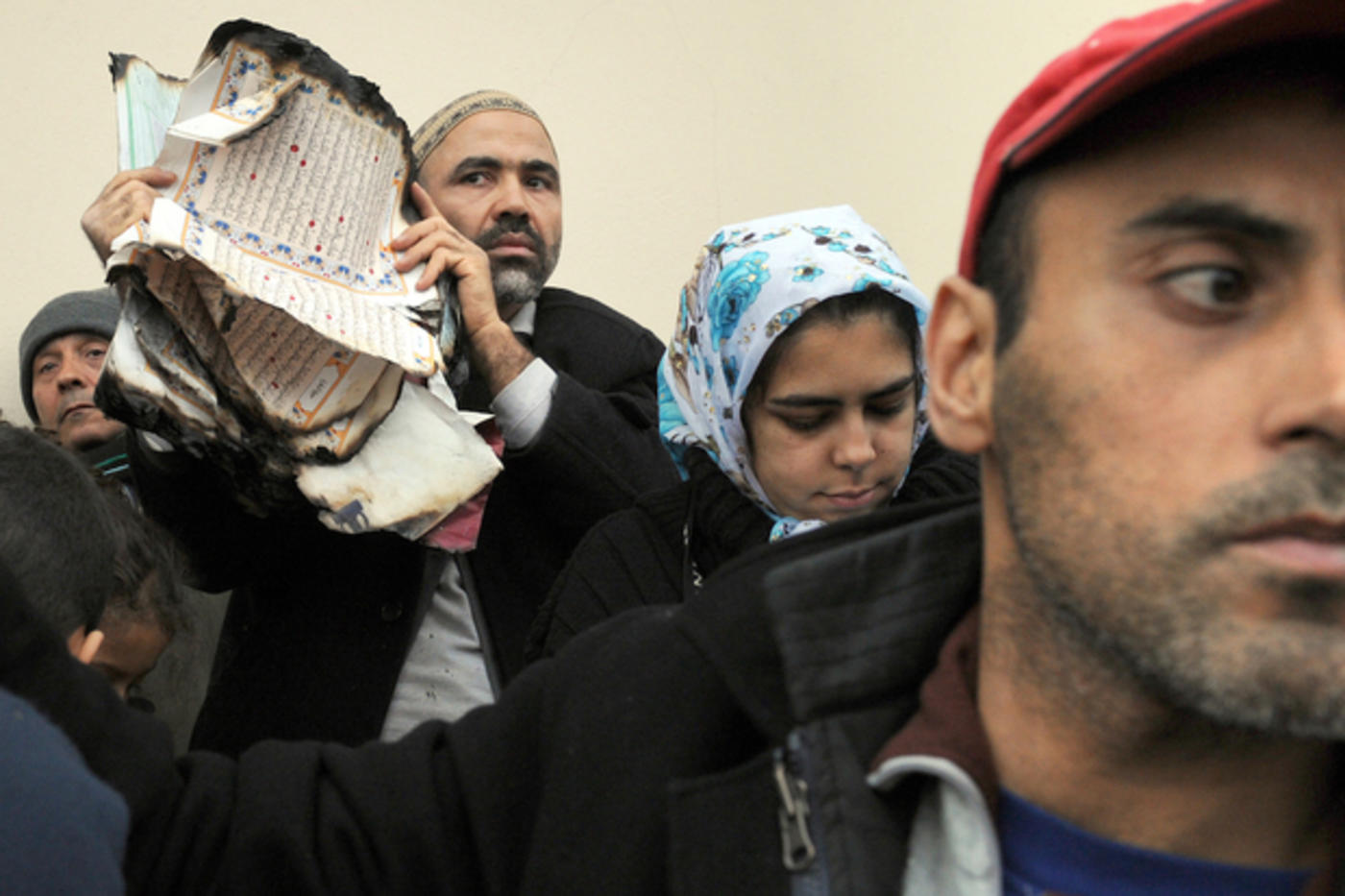 The two annus horribilis - 2015 and 2016 - that followed the Charlie Hebdo attacks have marked a turning point in France’s history.

Today, a portion of the population openly express disgust with “Arabs” and/or “Muslims”, who they feel have invaded their country. These fears have found an outlet in votes for extremist parties.

Seven million voters made the Front National (FN) the first party of the country in the first round of the 2015 regional elections.

In November 2016, during the battle for the Republican primaries, candidate and former prime minister Alain Juppé was renamed “Ali Juppé” by his racist enemies. He lost the battle in favour of his rival, Francois Fillon.

Rejected politicians have seized upon the fears and hatred that Islam inspires among voters. All the ministers “descending from immigration” have become the target of racist attacks. Rumours are fed against them, they are suspected of defending Islamism, of having benefited from “positive discrimination”.

When I was minister for the promotion of equal opportunities from 2005 to 2007, mocking voices called me “the minister of Arabs”.

Myriam el-Khomri, the labour minister, of Moroccan origin, declared in November 2015: “We still have a problem in our country, i.e. the name or colour of the skin remain extremely important markers. I am tired of coming to TV sets justifying myself as being French... Sincerely, look at French society. I am tired of having to justify myself about my origins.”

Using memory in the construction of collective identity

France has changed a great deal in the past 30 years. In the early 1970s, when the first brawls between young Arabs and policemen occurred in the suburbs of Lyon, Islam was absent from the debate on the integration of minorities.

The imprisonment of the delinquents, and their subsequent expulsion to North Africa, led to the first collective demonstration of Franco-Arab youth in 1983, initiated by the Christians of Lyon.

From Marseilles to Paris, the March for Equality and Against Racism demonstrated a desire for “integration” in France: we are here, we will stay!  The youth believed that they could find their niche.

At that time, memory was a major element in the construction of their collective identity. Yet the march was quickly seized upon by leftist ideologues, and the young people of the suburbs were thus despoiled of their own history.

From there, the conflicts which saw them clash with police became regular. Social and economic exclusion accelerated. These young people felt less and less French. The National Front began to break through in the political landscape. It was at this point that Muslim preachers began to offer young people the resort to an "original family", Islam.

A dramatic change then took place. Islam found its home in the cités (suburbs), offering marginalised young people an individual and collective outlet, a lifeline to the myths in the republic of liberté, égalité et fraternité, which obscured the damage caused by the marginalisation of millions of migrant families.

In January 2015, after the attacks on Charlie Hebdo, the prime minister himself regretted that France had allowed a social, economic and territorial apartheid to develop.

While Islam was a salutary remedy for many, this was not the case for everyone.

In 1995, Khaled Kelkal, a young high school student affiliated with the Algerian GIA terrorist group, was shot dead by the police in Lyon. The public discovered that an anonymous French youth, a simple delinquent offender, could turn into an Islamist terrorist. Shock and fear settled in citizens’ minds - and stayed there. Kelkal had “returned himself to religion” to regain the self-esteem he had lost.

We find the same journey in Malcolm X with The Nation Of Islam in the US in the 1960s. The Muslim leader imagined black states separated from the whites, unlike Khaled Kelkal who wanted to destroy that France in which he had not found “his place”.

In 2005, the unprecedented riots in suburban cities marked another turn after the death of two youngsters, Bouna Traore and Zyed Benna. At that time, Islam became an “identity bearer” against the society of exclusion, and was brandished as a banner for a new, provocative identification. Thus, the history of “minorities” in France mimics that of the US.

Nothing left to lose

The turn to Islam pointed to a worrying vacuum - these young people no longer demanded “integration”.

Disillusioned, they had nothing left to lose in society. They engaged in acts of vandalism and arson to scare the system with dramatic and tragic events. Inspiring fear was their means of existing, as was Islam.

During the struggle for civil rights, black Americans paid attention to this new language: that of their dignity, of pride. Say it loud, I'm black and I am proud!

The social mobility elevator has broken down

In France, the scenario was exactly the same in reaction to a form of self-devaluation among some Muslims, a desire not to be assimilated to the abuses committed by their “kind,” a “guilt by association”.

In 1965, Malcolm X denounced the creation of the image of black people by racist whites who "manipulated" the press. "One of the shrewd ways that they use the press to project us in the eye or image of a criminal: they take statistics. And with the press they feed these statistics to the public, primarily the white public ... So they use the press to create images. And at the local level, they'll create an image by feeding statistics to the press - through the press showing the high crime rate in the Negro community. As soon as this high crime rate is emphasized through the press, then people begin to look upon the Negro community as a community of criminals.

"And then any Negro in the community can be stopped in the street. 'Put your hands up,' and they pat you down. You might be a doctor, a lawyer, a preacher, or some other kind of Uncle Tom. But despite your professional standing, you'll find that you're the same victim as the man who's in the alley. Just because you're Black and you live in a Black community, which has been projected as a community of criminals.

"This is done. And once the public accepts this image also, it paves the way for a police-state type of activity in the Negro community. They can use any kind of brutal methods to suppress Blacks because 'they're criminals anyway.' And what has given this image? The press again, by letting the power structure or the racist element in the power structure use them in that way."

This is so true that, in France, as in the US, the majority can no longer stand the word “racism” and accuse minorities of "anti-white racism". Moreover, the majority rejects any idea of  “repentance” or “debt”.

This is also why the terms equal opportuniy, positive discrimination, and ethnic counting are considered to benefit mainly minorities, these so-called “social parasites”. Today, everyone agrees that the social elevator has broken down, as has the integration of minorities.

In 2015 and 2016, the terrible attacks sounded the death knell of an egalitarian and fraternal republic. With its immigrants and their millions of children, France must now fight Islamophobia. One way to do so is to introduce mandatory voting.

French Muslims who rarely vote are used as scapegoats by politicians who take advantage of popular fears to come to the rescue of the “white and Judeo-Christian race” from the Islamic invasion.

Today, there are only two French-North African deputies out of 577 in the National Assembly

Today, there are only two French-North African deputies out of 577 in the National Assembly, three out of 348 senators, and only five out of 36,000 mayors of municipalities. We must change that, because France is in a state of emergency.

The 2017 presidential election will be very perilous, but the republic must know that by stigmatising Islam, it furbishes the arms of Islamism. All the polls already announce an inescapable presence of Marine Le Pen, president of the FN, in the second round.

By attacking France, a former colonial empire inhabited by 10 million North Africans, Senegalese, Malians, Turks and their children, the highest density in Europe, the Islamic State (IS) counts on the irreversible divisions of the identity war.

This is the trap that must be avoided during the months preceding the 2017 presidential election.

- Azouz Begag is a writer, a researcher at the National Center for Scientific Research (CNRS), and a politician. He was the minister in charge of the promotion of equal opportunities under Dominique de Villepin's government from 2005 to 2007.

Photo: A member of the Muslim community waves a partially burned religious book in Saint-Priset, in the suburbs of Lyon, on 21 December 2008, during a rally gathering a thousand people denouncing the rise of “Islamophobia” in France, in the aftermath of the attempted arson of a place of worship that provoked protests at the national level (AFP).

Islamophobia
US official who replaced 'Islamophobic' councilman denounced for anti-Muslim posts
US Politics
US House committee pushes forward 'No Ban Act' for vote in Congress
US Politics
'No one should be harassed': Muslims urge US Supreme Court to allow lawsuit 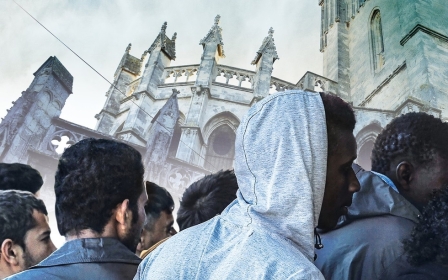