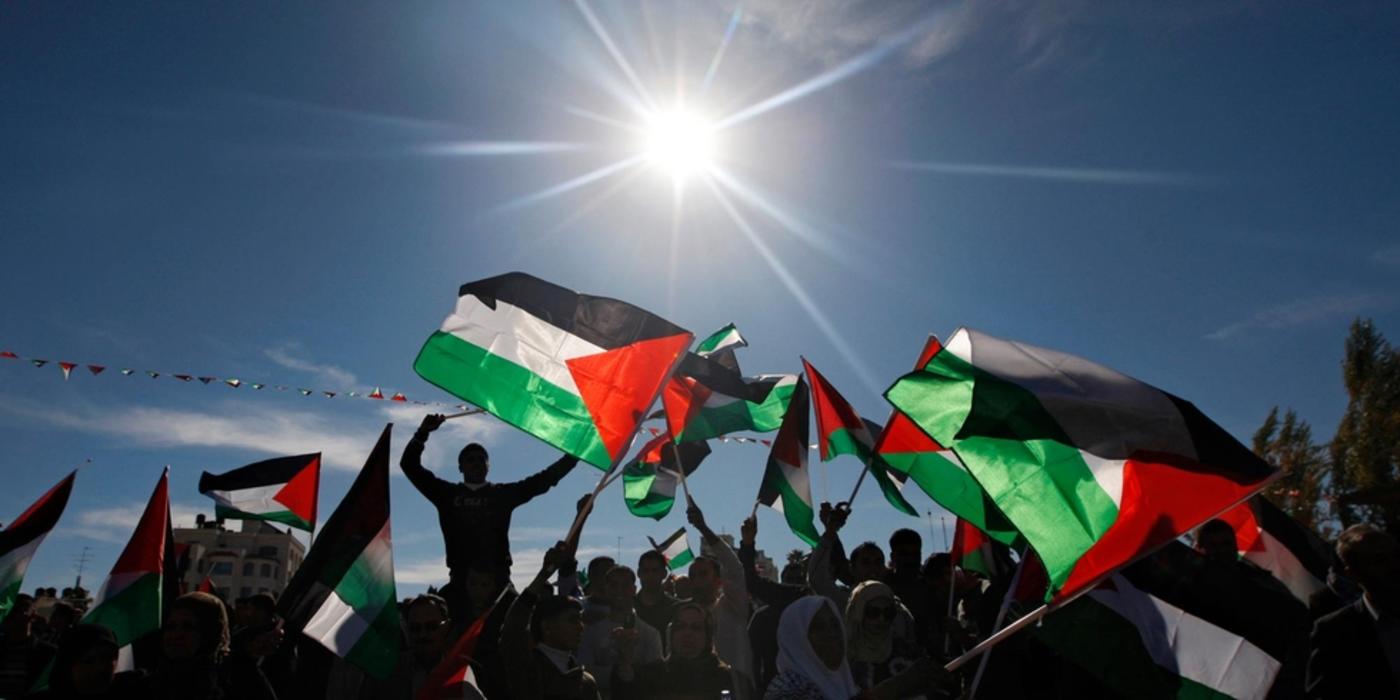 The Movement for Black Lives (MBL), a coalition of more than 50 Black US organisations, just published a long document laying out a transformational platform for the “fight against imperialism, capitalism, militarism and white supremacy” in the US and throughout the world. The platform focuses on domestic policies, but also discusses Palestine and the need for MBL to be connected with the Palestinian and other liberation movements in a shared struggle. That has become the focus of attention and criticism, as well as defence, of the document.

The platform lays out a clear vision of the world the MBL would like to create - together with “those who claim to be our allies”. It calls for “a complete transformation of the current systems, which place profit above people and make it impossible for many of us to breathe”. It demands an end to the wars against Black people and reparations for the harms that have been done. It articulates both “a vision of a fundamentally different world,” and 40 practical policy proposals that address the immediate suffering and needs of Black people and are necessary to move towards the world it envisions.

One of the platform’s six demands is Invest/Divest, calling for investment in health, education and community well-being, and divestment from exploitative forces, including prisons and fossil fuels. Offering an anti-imperialist analysis of the US as “an empire that uses war to expand territory and power”, it calls for a 50 percent cut in military expenditure, an end to the militarisation of Africa and to the violence perpetuated by the "war on terror".

In this long section is a paragraph regarding Palestine that says: “The US justifies and advances the global war on terror via its alliance with Israel and is complicit in the genocide taking place against the Palestine people.”

It outlines how US military aid to Israel “not only diverts much needed funding from domestic education and social programs, but it makes US citizens complicit in the abuses committed by the Israeli government”.

It details how Israel is “an apartheid state”, which keeps taking Palestinian land to make way for illegal Israeli settlements.

The platform calls for several actions to deal with this problem, including: engaging the Leahy Law, which prohibits the US government from providing military assistance to foreign military units that have committed a gross violation of human rights; organising campaigns against G4S and other global private prison companies profiting from “the shackling of our community, in the US, in Palestine and around the world”; and fighting the expanding number of anti-BDS bills being passed in states around the country, that “not only harm the movement to end the Israeli occupation of Palestine, but also threaten Americans’ constitutional right to free speech and protest”.

This section of the comprehensive platform has caused pro-Israel groups and their media outlets to go ballistic. The backlash, largely centred on the use of the word “genocide”, is one of near hysteria, with some going so far as to label some in the BLM movement anti-Semites or to imply some are terrorists. Honing in on one specific detail of the platform has enabled them to avoid addressing all the other important problems and proposed solutions.

Almost immediately, the Jewish Community Relations Council (JCRC) of Boston responded that it could not align itself “with organisations that falsely and maliciously assert that Israel is committing ‘genocide’”, or that “seek to isolate and demonise Israel”. Its outraged statement continued: “To conflate the experiences of African-Americans and Palestinians oversimplifies complex matters and advances false equivalencies that diminish the unique nature of each.”

Jonathan Greenblatt, director of the Anti-Defamation League (ADL), an organisation that is currently hosting its annual training delegation in Israel for US police chiefs, declared the use of the term “genocide” to describe Israel’s policy “repellent and completely inaccurate”. It labelled the platform “offensive in tone,” and “irresponsible”.

Even liberal Zionists joined the chorus of criticism. Peter Beinart called the platform’s reference to genocide “stupid”, while T’ruah: The Rabbinic Call for Human Right expressed “extreme dismay” at the use of the term: “[T]he military occupation does not rise to the level of genocide- a term defined as "the intent to destroy, in whole or in part, a national, ethnic, racial or religious group". While we agree that the occupation violates the human rights of Palestinians, and has caused too many deaths, the Israeli government is not carrying out a plan intended to wipe out the Palestinians.”

This outrage ignores the growing number of scholars who have used the term “genocide” to describe Israel’s conduct towards the Palestinians since 1948, particularly after the 51-day military assault on Gaza in 2014. They include Michael Ratner, the recently deceased long-time president of the Center for Constitutional Rights, University of Exeter professor Ilan Pappe, and Martin Shaw, a leading expert on genocide from Roehampton University.

Progressive Jewish groups, such as Jewish Voice for Peace (JVP), have countered with a strong defense of the MBL platform, thus continuing the struggle against the status quo of Jews who are progressive on all issues except Palestine. JVP, which supports the movement to boycott, divest from and sanction Israel, unconditionally supports the MBL platform “in its entirety, without reservation.”

Regarding the genocide accusation, JVP argued that it is not its role to police the language of the vision for Black Lives. The group expressed its deep disappointment with mainstream Jewish organisations for condemning the “thorough and inspiring transformational set of policy ideas developed by a broad coalition of Black leaders simply because [they] have explicitly linked the experiences and struggles of Palestinians with their own”.

The Jews of Color Caucus, which was organised in partnership with JVP, accused mainstream Jewish groups of taking “disturbing anti-Black and anti-Palestinian actions”, and of “detracting and distracting from such a vital platform at a time when Black lives are on the line, simply because the organisers chose to align their struggle with the plight of Palestinians”.

Declaring its unreserved solidarity with the MBL, it criticised the sweeping claim that solidarity between the Black struggle in the US and Palestine is anti-Semitic. And importantly, it condemned “the delegitimisation of Black and Palestinian struggles, especially by white Ashkenazi Jews who attempt to assert sole claim to the limits and bounds of what constitutes ‘actual’ genocide”.

Proving that the Israel lobby’s effectiveness is decreasing, particularly among young activists, MBL show no signs of backing down. For many, the issue is personal, as they themselves have been to Palestine and witnessed human rights abuses against Palestinians. They have drawn parallels between the way that Palestinians and Blacks are criminalised for defending themselves against oppression.

When asked about JCRC’s rebuke, Ciara Taylor of the Dream Defenders, one of the organisations in the MBL responded: “Good... We’re living in a time now when we need to know who our allies are. As a movement fighting for the liberation of Black people everywhere, it is important that we are not aligning ourselves with people obstructing resistance struggles anywhere.”

Refusing to be bullied into sanitising its words, Dream Defenders (DD) has denounced “[t]hose who have previously claimed to be allies of the Black Lives Matter movement [who] have shown us that they are comfortable with our resistance so long as it fits within particular confines and restrictions… as long as we stay silent about Israeli apartheid... Now that our movement has taken a stand against all forms of white supremacy and oppression, Black lives no longer matter.” DD firmly rejected this hypocritical “quid pro quo form of politics”, saying that “[t]rue solidarity does not come with strings attached”.

The Dream Defenders defiantly summed up the response of the MBL and its allies, including those in the progressive Jewish community, to the flood of condemnation and attempts to dictate how the struggle should be fought, by calling on “all those who believe in a world in which all people are free [to] join us. For those who no longer stand with Black people… goodbye. We do not need nor want you in our movement.”

- Audrey Bomse worked in Palestine from 2001- December 2008, where she was detained for four days and eventually deported, after sailing to Gaza with the Free Gaza Movement (FGM). Bomse became FGM's lawyer and later worked with the legal team representing Freedom Flotilla victims before the UN Human Rights Council Fact-Finding Mission, the International Criminal Court and the Turkish criminal court.

Photo: A photo from the Blacks 4 Palestine Facebook page. 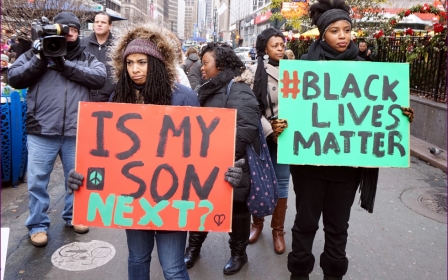 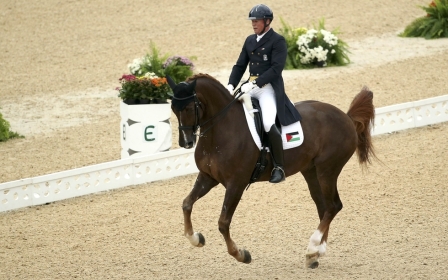 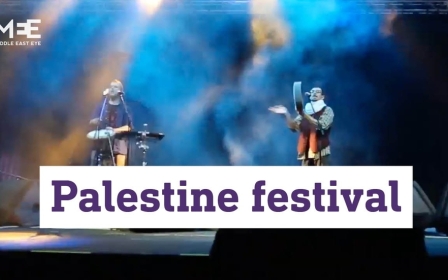