Gary Johnson's 'Aleppo moment' is better than ours

Adham Sahloul
How many more horrors will be needed for the bombed and besieged people of the Syrian city to get their 'Aleppo moment'? 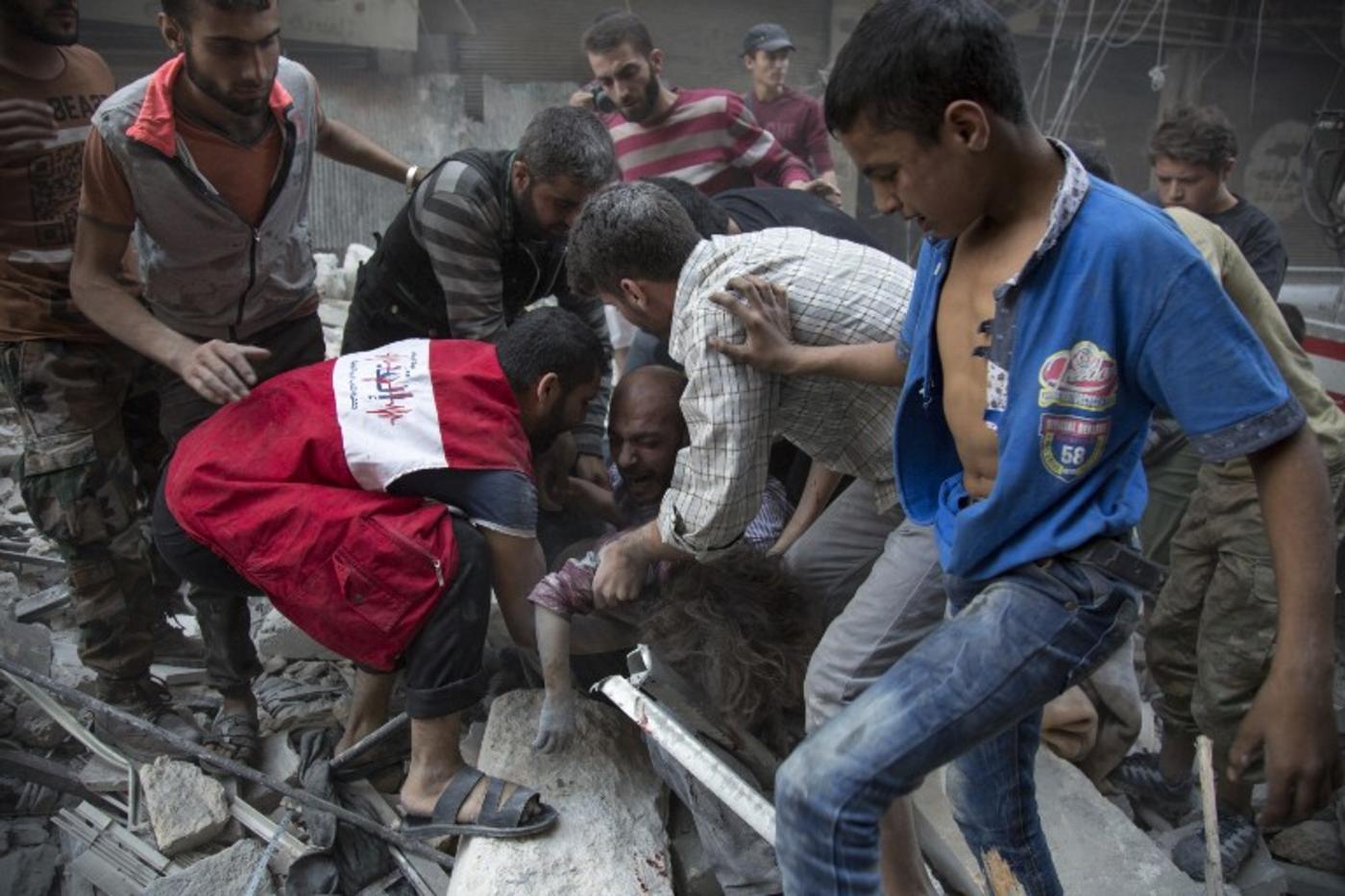 GAZIANTEP - We should be outraged that Syria was not brought up in the first presidential debate. You should have been completely, life-threateningly drunk from taking a sip everytime Syria was not mentioned by Donald Trump and Hillary Clinton.

Our attention deficit disorder in an information, content-heavy landscape does only more to besiege the people of Aleppo under a cloud of apathy, information-overload, and benign ignorance

Instead, you're feeling some type of way about this: yesterday, former governor of New Mexico and Libertarian Party candidate for US president Gary Johnson embarrassed himself yet again when pressed at an MSNBC town hall to name his favorite "world leaders".

Stumped and unable to name one, he jokingly said that he was having another "Aleppo moment". He is referring, of course, to his now infamous MSNBC Morning Joe appearance where he proved clueless about the situation in Aleppo, the second largest city in Syria and now the face of the worst humanitarian crisis since the Second World War.

When Johnson replied "What is Aleppo?", host Joe Scarborough and all viewers replied with snarky disbelief that this person was running for president, and those of us working on Syria replied with a depressing #WhatIsAleppo campaign on Twitter to try to explain the horrific situation. That reflects more about the world we live in than it does about someone named Gary Johnson.

It is quite silly that this is news, because he’s never going to win the presidency, and, as my Syrian friends in Gaziantep, Turkey, just north of the Syrian border asked me, “what is Gary Johnson?”. It is even sillier that these articles (here, here, and here) about hospitals being bombed in Aleppo weren’t our topic of indignant discussion.

The policy and journalism bubble on Twitter gets in a good laugh and then rides the wave of the news cycle to some other place and pats itself on the back for being such well-read, global citizens. Everyone else ignores or occasionally follows this thing called "Syria" which reminds us of that place called "Iraq", which AJ+ or Channel 4 put on our Facebook feed or which Nick Kristoff decides to curate for us in his weekly column.

Our attention deficit disorder in an obviously information and content-heavy landscape does only more to besiege the people of Aleppo under a cloud of apathy, information-overload, and benign ignorance.

The people I speak to daily in Aleppo wish that we, the people of the West, and not just us so-called educated folks who could name more world leaders than Gary Johnson, could have our "Aleppo moment" - a moment where we could all focus on one thing, notice how atrocious and dire the situation is for over 300,000 people besieged in the eastern half of the city.

That moment might translate into social and political pressure for the world’s leaders, namely President Obama, to do something about the Syrian government and Russian warplanes that have bombed citizens over 1,000 times in the past week, killing over 400 and injuring more than 1,000 people.

Just yesterday, two of the largest hospitals of the remaining eight in East Aleppo were bombed and put out of action by either the Syrian government or its Russian ally at the crack of dawn. One of those hospitals has been targeted nine times since the siege on Aleppo began in July.

There are 29 doctors remaining to treat the wounds from cluster bombs, barrel bombs, incendiary weapons like napalm, artillery shelling and chemical weapons. The hospitals and shelters built underground will now be no match for the bunker-buster bombs introduced last week in Aleppo by Russian warplanes.

International law, along with our sense of humanity, are floormats that the Russian and Syrian government’s forces wipe their boots on.

President Obama can likely name several world leaders. But here’s a “moment” that he was never derided for: President Obama shared young Alex’s letter about Syrian refugees. Alex, a six-year-old, told President Obama to open the doors to someone like Omran, the "ambulance boy", who was rescued after a bomb struck his home in East Aleppo and whose picture in the ambulance then went viral, an icon of what was taking place in Aleppo.

He spoke about this at the UN refugee summit more than a week ago, and posted about it on Facebook. We all ate it up and sang our praises for Alex, as we should have. But did anyone question why President Obama’s strategic communications firm of a White House conveniently places children like Omran in the "refugee" bucket, rather than in the ‘people that need protection’ bucket?

Does he really think that Omran, who has a family, would rather become a refugee than be a victim of mass atrocities which President Obama allows to go on unfettered?

So many otherwise intelligent people shared the president’s Alex/Omran letter without questioning why we were not doing more to hold him accountable for the hundreds of thousands killed in Syria on his watch. Because accepting refugees is not controversial if you’re liberal. It makes it seem like you aren’t washing your hands of the supposedly complicated situation they ran away from.

But Syria is not as complicated as the president would like us to think.

There are Syrian government and Russian warplanes bombing civilians with ungodly weapons. Those planes should not be permitted to do that, but thanks to President Obama, there are no "red lines" in Syria anymore.

At the outset of the conflict, President Obama declared the the use of chemical weapons was a “red line” that would be met with consequences. When they were used in a massacre of over 1,000 civilians in Ghouta near the capital Damascus in 2013, Obama agreed to Russian terms to strip Assad of his chemical stockpile.

Yet, Human Rights Watch just released a report confirming that Assad forces used chlorine gas more than once in Aleppo, affecting over 120 people and killing five.

What doctors inside Syria beg of us is to ground the planes and allow for humanitarian aid to enter safely, rather than be targeted like the UN aid convoy that was hit by Russia two weeks ago - also without consequence, and also forgotten in discussions on Twitter literally days after it happened. This might happen if we could pay closer attention, beyond half-assed retweets.

Our leaders have been able to get away with doing nothing because there have been no political costs; ironically, the sitting US Ambassador to the UN Samantha Power wrote this in her claim-to-fame book about genocide and US foreign policy. We need President Obama to have that "Aleppo moment", for humanity’s sake. Otherwise, this is the mirror of our soul:

- Adham Sahloul  is an advocacy officer at the Syrian American Medical Society (SAMS) in Gaziantep, Turkey. He previously worked at Portland Communications and the Brookings Institution. Views expressed here are his own.

Photo: Syrians surround a man as he cries over the body of his child after she was pulled out from the rubble of a budling following government forces air strikes in the rebel held neighbourhood of Al-Shaar in Aleppo on 27 Septmeber 2016 (AFP)