Giro d'Italia's Israeli leg will be a tour of injustice

Flavia Cappellini
Israel will host the first three stages of the famous Italian cycling event, helping to celebrate the 70th anniversary of the state’s foundation 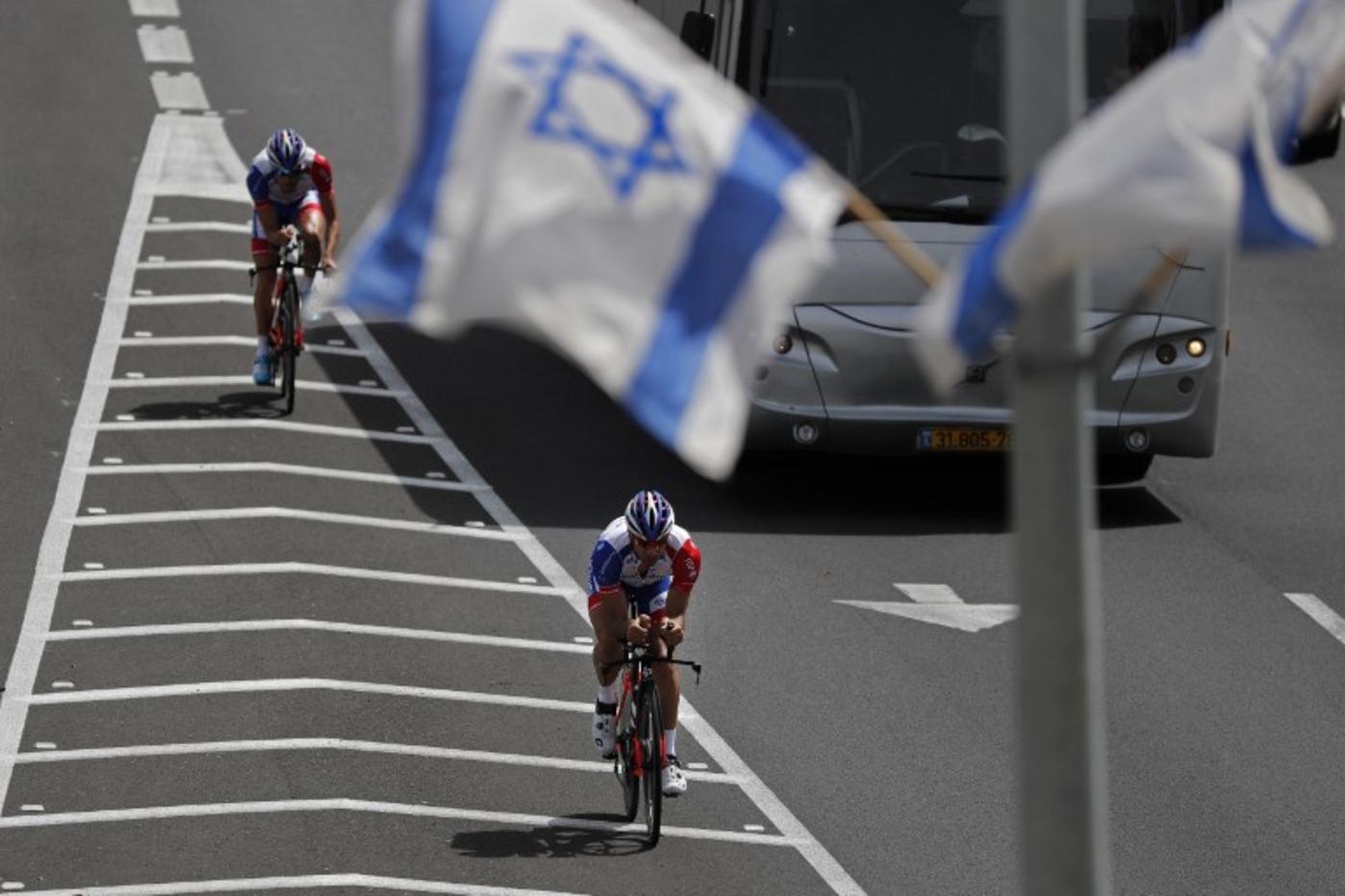 Road cycling is a unique sport on the world stage, as there are no barriers between athletes and spectators. Alessandro Baricco, a famous Italian poet, once wrote: "Going to watch cycling is something that if you think about it, you do not believe it... Everyone in the village is out of the house, picnicking with a thermos, radio, windbreakers and their programmes open to figure out which cyclist is which. A party!"

The first three stages of the race, this year dubbed the "Tour of Peace" by organisers, will be in Israel. For the first time, the Giro will start outside Europe, before criss-crossing Italy and ending in Rome, linking the state where fascism was born and eventually resisted and the state born after the Holocaust. One of the most famous Italian sporting events, the Giro d’Italia has become part of the celebrations for the 70th anniversary of Israel’s foundation and the organisers hope to send out a message of tolerance. A beautiful narrative, but it is probably not lost on many that there is an elephant in the room.

Today, Israel and Palestine are still at the centre of international tensions, from the international boycott-Israel movement to accusations of anti-Semitism. Organising a big sporting event in the midst of this could not possibly avoid politics - not least because millions will watch the race traverse one of the most hotly disputed territories in the world.

By contrast, in Haifa, events related to the 70th anniversary of the birth of the country are known by another name: the Nakba

Choosing Israel makes sense logistically. The intercontinental flight to carry hundreds of athletes, staff and sponsors from the third stage in Israel to the fourth stage in Sicily is just a few hours over the Mediterranean. To exploit this opportunity, RCS Sport was probably well aware of the need to avoid controversy.

Mauro Vegni, the race director of the Giro d’Italia, insisted that “we do not mix sport with politics” and that this is “the Tour of Peace from Jerusalem to Rome”. He explained that the three Israeli stages were mapped out according to recommendations from the Italian ministry of foreign affairs. They keep within the borders recognised by the United Nations - from before the 1967 war. The Giro avoids the occupied territories where, to date, the state of Israel is in violation of international law.

Was this diplomatic caution sufficient to keep the Giro d’Italia away from any controversy? Perhaps it is worth examining, stage by stage, how this geopolitical cooperation has developed between sport and international law, in the name of not mixing sport with politics.

The first day of the race will be a 9.7km individual time trial in Jerusalem. According to the International Court of Justice (ICJ) and the UN, there is no single sovereignty over Jerusalem; West Jerusalem is administered by Israel, but East Jerusalem is recognised as a part of the West Bank territory illegally occupied by Israeli forces, and claimed by Palestinians as the future capital of an autonomous state.

The first stage of the Giro, unsurprisingly, takes place strictly in the streets of West Jerusalem, the part internationally recognised as being in the state of Israel. When official Giro d’Italia promotional material published in November named it as “West Jerusalem”, the reaction of the Israeli government was immediate. In a joint statement, Israeli culture and sport minister Miri Regev and tourism minister Yariv Levin declared: “There are no West Jerusalem and East Jerusalem but a single Jerusalem, the capital of Israel... Those publications are a violation of agreements with the Israeli government, and if they are not changed, Israel will not participate in the event.”

A few hours later, the organisers of the Giro cut the word “West” from their promotional material, noting: “RCS Sport wants to clarify that the start of the Giro d’Italia will take place in the city of Jerusalem. In presenting the race route, technical material was used containing the words ‘West Jerusalem’, attributable to the fact that the race will develop logistically in that area of ​​the city. It is emphasised that this wording, devoid of any political value, was however immediately removed from any material linked to the Giro d’Italia.”

According to the organisers, ignoring the international legal status of Jerusalem - sanctioned by the ICJ and five UN resolutions - is considered to be devoid of any political significance, cowing to the Israeli narrative that presents the Holy City as the indivisible capital of Israel.

The second stage runs on 5 May from Haifa, the Mediterranean centre of Israeli Arab culture, along the coast to Tel Aviv, the current de facto capital of Israel. Israel was founded 70 years ago and the Giro d’Italia arriving in the city will be part of its anniversary celebrations.

By contrast, in Haifa, events related to the 70th anniversary of the birth of the country are known by another name: the Nakba. This translates from Arabic as the “catastrophe”, when more than 700,000 Arabs fled or were expelled from their homes.

Every year, on the occasion of the anniversary of the birth of Israel, the Arab population calls for the recognition of UN Resolution 194, which states that refugees wishing to return to their homes and live in peace with their neighbours should be allowed to do so as soon as possible, and compensation should be paid for the properties of those who choose not to return. Haifa is the symbolic city of this exodus.

According to Israeli NGO Zochrot, a group that aims to keep the historical memory of the Nakba alive among the Israeli population, the number of Arab residents either expelled or killed or who escaped from the city in 1948 brought the population of Palestinian origin down from 75,000 to 3,500. Meanwhile, the Jewish population has grown to more than 90 percent of Haifa.

Nakba refugees and their descendants now live mainly in Gaza, the West Bank, Jordan, Lebanon and Syria. This year, the population of Gaza embarked on the Great March of Return, symbolic protests calling for recognition of the right of refugees from 1948 to return to their homeland. On 5 May, as the Giro d’Italia peloton travels through the streets of Haifa, thousands of people will likely still be attempting to leave Gaza to obtain the right to return, as sanctioned by the UN.

To date, 45 civilians have died in these protests, including two journalists. All were killed by Israeli forces around the border between Gaza and Israel, less than 70km from the finish line of the second stage of the Giro. In addition, among the thousands of wounded, there have been 30 Palestinian athletes, including cyclist Alaa al-Dali, 21, who lost his leg after being shot by Israeli forces.

The last stage, finally, will take place on 6 May in the Negev desert: 229km from the provincial capital, Beer-Sheva, to the resort town of Eilat on the Red Sea. At first glance, the Negev desert looks like a huge stretch of sun and sand, with vast tracts marked as state-owned on the map. In fact, there are ongoing building projects to accommodate the growing population of Israel - but some of these lands are inhabited by the last nomadic peoples of the Negev, in villages that were not immediately recognised by the state. Over time, some settlements have been recognised and others destroyed. There are still 35 unrecognised villages under threat of demolition.

The Giro route passes by the biggest unrecognised village, Wadi al-Naam, home to 13,000 people on the sidelines of the main road through the desert. As the cyclists race past on the paved road, the residents of Wadi al-Naam will find it hard to see the peloton, as their village has barely any infrastructure and even lacks a proper road connecting it with the rest of the region.

Human Rights Watch has denounced the absence of basic services in this area as unconstitutional, as every citizen of the state should have equal rights to property, equality and dignity

Not only are the streets missing: the village is not connected to the water system and the power grid, and an industrial chemical factory, Neot Hovav, was founded nearby. It is therefore not surprising that one of the highest infant mortality rates in Israel has been recorded here. Human Rights Watch has denounced the absence of basic services in this area as unconstitutional, as every citizen of the state should have equal rights to property, equality and dignity.

When a cycling race crosses a country, its citizens usually welcome the competition in their streets without barriers, without protection, and without having to pay for a ticket. You can play a game of football behind closed doors, but you cannot control a 200km race along roads that pass houses, people and local infrastructure over three weeks.

To succeed, a major stage race needs the cooperation of the local population. It needs security and control over the territory. Hosting such a sporting event is, in itself, both a form of tourist promotion and the state’s affirmation of its full control over the population living in that territory.

In these circumstances, it is legitimate to at least ask whether the Israeli government is trying to use the Giro d’Italia to promote a new and stronger nationalist narrative, starting with Jerusalem as the capital of Israel. The nature of this sport poses a challenge in securing the territory for a safe race. Indeed, at the presentation of the Giro in Jerusalem, the Israeli government declared that this event would be the largest security operation since the birth of the state of Israel. Prime Minister Benjamin Netanyahu, as always, seems confident.

- Flavia Cappellini is a TV content producer covering media, sport and cycling. She has previously worked for RAI and English Press TV and she holds an MA in Media from City, University of London.

Photo: Cyclists train for the Giro d'Italia near Beit Shemesh on 3 May (AFP) 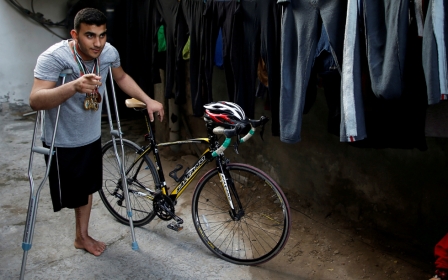 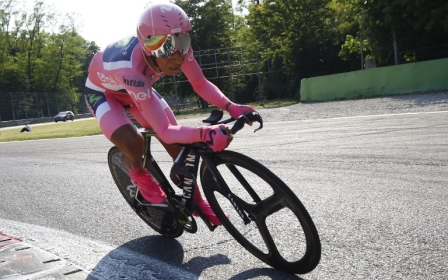