The Hebron shooting and the roots of racism in Israel

Tom Mehager
The Israeli left does not deal with the Palestinian Nakba, but is also silent around the injustices perpetrated by European Zionism against Mizrahi Jews 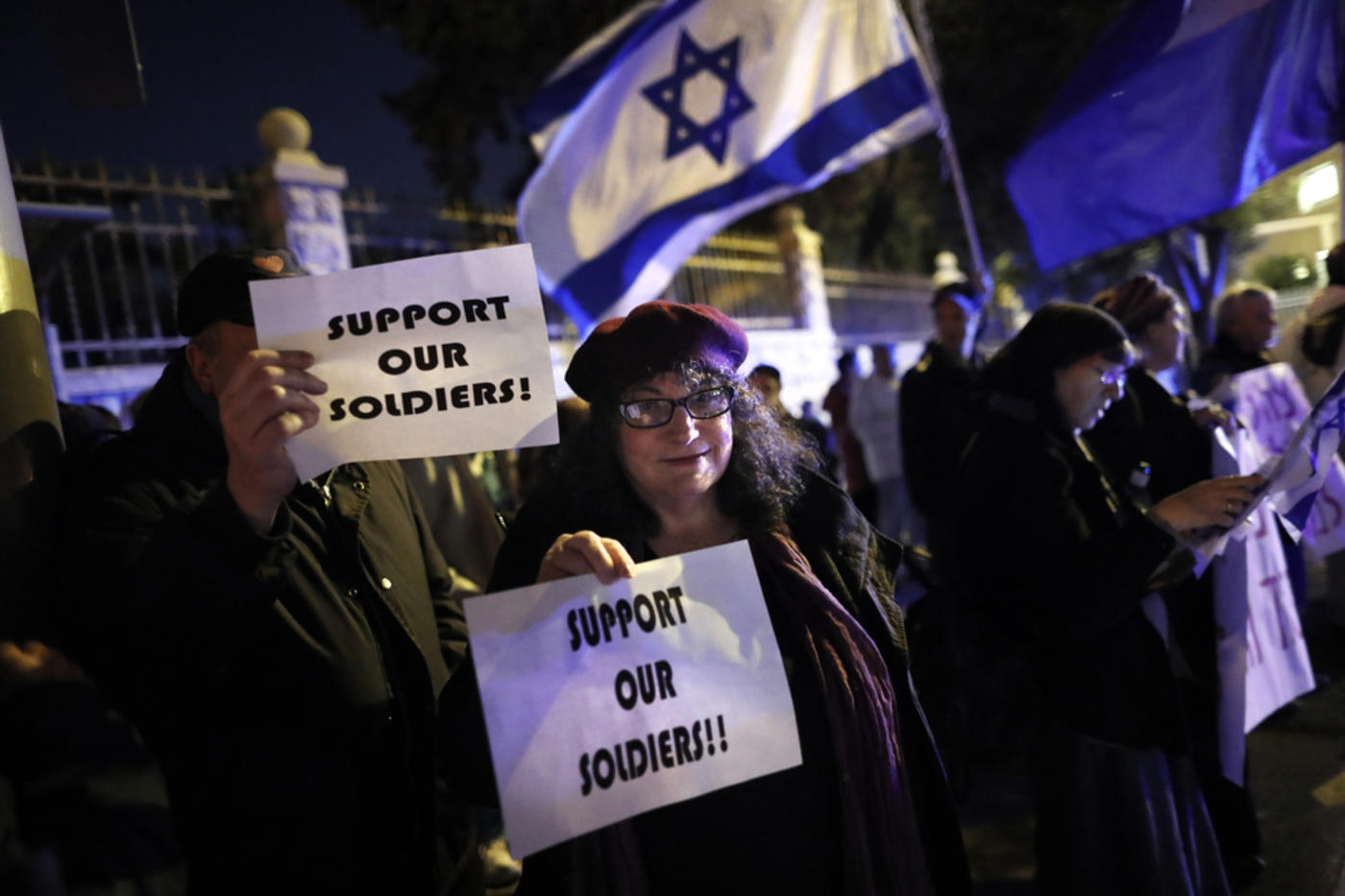 A survey published on Israel’s Channel 2 last week revealed that most of the Israeli public supports the actions of the soldier who shot to death Palestinian assailant Abdel Fattah al-Sherif following the knifing of two soldiers in Hebron: 57 percent of respondents said the soldier should not have been arrested and that no criminal investigation was warranted; 42 percent of respondents said that the soldier behaved responsibly; and 24 percent said that, under stress, such behaviour is natural. How did the Israeli public arrive at such a moral low?

First let us note that the soldier’s behaviour was legitimised by senior Israeli figures who declared that such attacks should end with the assailant shot to death, as distinguished from shooting in self-defence. Education minister and member of the government’s security cabinet Naftali Bennett, for example, said that “a terrorist whose actions endanger the lives of our soldiers should be eliminated”. And indeed, to a question about why he had shot al-Sherif to death, the soldier responded that “the terrorist was alive, he had to die”.

It is important, in the meantime, to examine the roots of Israeli racism. The Israeli left claims that racism in Israel stems from the occupation – the military rule over the territories occupied after 1967. This view holds that Israel was established on a foundation of democratic, liberal values, and was pushed into becoming increasingly violent by the occupation of 1967.

My own belief is that the origins of all this predated 1967. In Israeli public discourse, there is no critical discussion whatever of the basic values of the Zionist movement regarding the Palestinian natives of this land. Evidently the overwhelming majority of Jews in Israel, including what is known as the left, conveniently forgets that the Zionist movement from the outset spoke of Palestine as an empty land. European Zionism explicitly set out to “make the wilderness bloom” in Palestine, “a land without a people for a people without a land”.

Accordingly, in 1948 Israeli forces almost completely razed some 400 Palestinian villages, on the ruins of which hundreds of Jews-only villages and kibbutzim were established. The 1948 war and its aftermath created about 800,000 Palestinian refugees; when the state of Israel was founded, it immediately imposed a military government on the Palestinian population that remained within the new state’s boundaries. One goal of that military government between 1948 and 1966 was the continuing confiscation of Palestinian lands by the new Jewish state.

So why does the Israeli left almost completely ignore a chapter so crucial to understanding the conflict? The answer lies in the ethnic identity of the Israeli left. Most campaigns by the “leftist camp” in Israel – meaning Labor, Meretz, and Jewish supporters of Hadash – are Ashkenazim, the children and grandchildren of the first Zionists from Europe. The same is true of most staff members and governing boards at Israeli human rights organisations.

As scions of the nation’s founders, they have trouble criticising the latent violence of the state along with the privileges the state has granted them, as children of the “white tribe”. Hence their preference to focus, from a moral standpoint, on what happened in the territories conquered in 1967.

But the 1967 conquest is a direct continuation of the classical Zionist ideology of Judaising the land. Just as so many kibbutzim were built atop former Palestinian lands, prior to 1948 and continuing under the military government to which Palestinians in Israel were subject until 1966, today’s settlement enterprise exploits the military government across the Green Line to build and expand settlements there. The kibbutz movement and the settlement movement are both led by Ashkenazim. They are the ones exploiting the authority of the Zionist “settlement entities” – the Israel Lands Authority, the Jewish National Fund, and the Settlement Division of the Jewish Agency – to further their collective interests.

In this regard one ought to pause to consider the role of Israel’s “black” labour underclass in light of the reign of violence over the Palestinian people. The soldier who shot al-Sherif to death is Mizrahi and comes from a town designated as socioeconomically mid-level or lower level. Most of the soldiers in the Kfir Brigade come from a similar ethnic and socioeconomic background, and the brigade’s main job is to operate in the occupied territories.

As a Mizrahi activist, it is important to me to see these things from the viewpoint of the public from which I come. From a historical standpoint, the Ashkenazi establishment has viewed the Arab identity of our parents as an enemy. Consider the irony of a book about the Palestinian Nakba that also addresses, and very sensitively, the crimes of the Ashkenazi Israeli establishment against immigrants from Arab and Islamic countries.

In his novel Gate of the Sun, author Elias Khoury tells of a meeting between a Palestinian refugee, Umm Hassan, and a Jewish immigrant from Lebanon, Ella Dweik, who is living in Umm Hassan’s house in Al-Kawikat. Umm Hassan comes to the house and weeps over the home that was taken away from her. Then they talk together, and Dweik tells Umm Hassan about the immigrant transit camp, the spraying of her family with pesticides, and the campaign of humiliation directed at their Arab identity.

“She related that her father screamed in rage when they forced him to take off his red tarbush. Suddenly a hand reached out for the tarbush and laughing soldiers tossed it back and forth in an impromptu game of catch. Her father ran hither and yon, trying to grab the tarbush back again. When he realised it was gone forever, he began to wail: ‘There is no God but Allah.’ Then they thought he was a Muslim and subjected him to a long interrogation, before allowing him to undress, undergo the spraying with pesticide and get used to going bare-headed from then on.”

The state flagged the Arab component of Mizrahi identity as something to be uprooted from within us, and into the cultural and identical vacuum nationalistic and ultra-Zionists trends step in. Particularly noteworthy is the fact that just as the Israeli left does not deal with the Palestinian Nakba, there is also a bond of silence around the injustices perpetrated by European Zionism against Mizrahi Jews.

Two other components explain, in my opinion, the high percentage of enlistment by young men from the Israeli periphery in military units such as the Border Police and the Kfir Brigade, and their espousal of nationalist positions.

First, immigrants to a new country will always be more forceful in adopting hegemonic positions. Those who arrived after Israel was founded – Mizrahim and immigrants from Ethiopia and the former Soviet Union – wanted, and still want, via their military service and their Israeli patriotism, to prove that they too are upstanding citizens, just like the early Zionists (for whom the term was “salt of the earth”). Secondly, for lower socio-economic groups, the military is a portal to career opportunities in the army, the police, security companies, and so on.

Thus the left in Israel talks on the one hand about human rights and social justice, but on the other hand ignores the history of Zionism regarding the Palestinians, the oppression of Jewish groups other than whites, and the extra privileges enjoyed by Ashkenazim. In these circumstances, clearly most of the Jewish public will feel alienated from what the Israeli left represents and more aligned with the messages of the Israeli right.

In sum: Violent chapters from the past that have been repressed and denied emerge finally in negative ways in the present. Festering under the surface for decades, these ethnic and socioeconomic dynamics are now leading the majority of Israelis to adopt increasingly racist positions toward Palestinians.

If we want to deal with this situation seriously and in depth, we must go back to the roots of the regime of the Jewish state and work to redress the various injustices it has meted out.

Photo: Israelis gather in front of the Prime Minister's residence in Jerusalem on March 31, 2016, to express their support to an Israeli soldier caught on video shooting a wounded Palestinian assailant in the head as he lay on the ground in the occupied West Bank city of Hebron (AFP).