How serious is Iran about closing the largest global oil chokepoint? 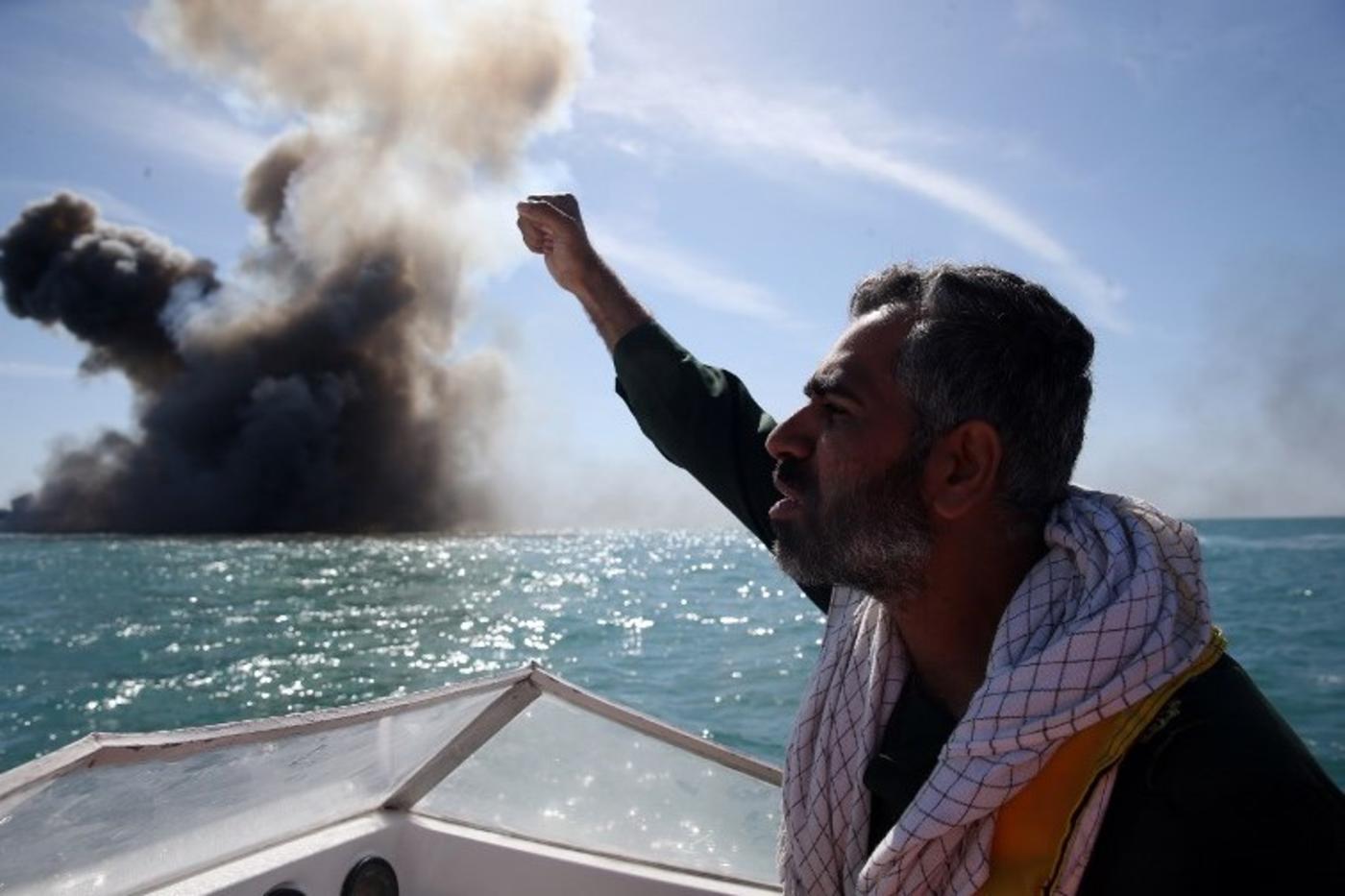 A heated exchange of threatening words comes as tensions between Iran and the US reach new heights. In recent days, from Iran's supreme leader to its president to its high-ranking generals come declarations that, if Tehran were not able to export oil via the Strait of Hormuz, "no other country would be able to do so".

The Strait of Hormuz is the world's most important oil transit chokepoint. Daily flows are around 18.3 million barrels (bpd), accounting for 35 percent of all seaborne traded oil and almost 20 percent of oil traded worldwide.

Iran's economy is already lashed with destructive winds from the US embargo on Iran's oil export and banking system, which will take full effect on 4 November.

Shortly after the bombastic threats of the leaders of Iran and the US against each other, on 23 July, Telegram, the king of messaging apps and social media in Iran with more than 40 million users, was filled with users' comments urging each other to buy US dollars as a hedge against depreciation of their assets.

The rial lost 14 percent against the US dollar on that one day. Hitting an all-time high, the dollar traded at 95,000 rials in the black market, up from 83,000 the day before.

Iranians from across the political spectrum are extremely worried about the current trend. There is a consensus among economists in Iran that the price of almost everything is tied to the value of the dollar. Alluding to the sanctions, an Iranian minister said a few days ago, "We have to be ready for a storm after November."

American officials initially said that Iran's oil importers have to cut their imports to zero by November or face hefty penalties. But recently top Trump cabinet members, including Treasury Secretary Steven Mnuchin and Secretary of State Mike Pompeo, said that the US would consider sanction waivers on Iranian oil imports. Will this solve the impediment that Iran would face come November?

During Barack Obama’s presidency, prior to the culmination of the Iran nuclear deal, the US administration would issue waivers for a number of countries and Iran could sell around a million bpd crude oil compared to 2.7 million bpd in June 2018. The problem, however, was that oil payment routes to Iran were blocked by the sanctions on the Iranian banking system.

Through a very complicated mechanism, Iran managed to bypass the international banking system. However, that evasion scheme, claimed to be the largest sanctions busting operation in modern history, is now known to the Americans as a result of Reza Zarrab's revelations during his trial on charges of evading Iran sanctions, and presumably will be blocked.

In an attempt to keep the nuclear deal alive, the European Union (the EU) has been trying to partly compensate the impact of US sanctions by offering to guarantee Iranian oil revenue and make direct money transfers to Iran's central bank through its financial arm, the European Investment Bank (EIB). But there are doubts that the plan will become reality.

Will Iran close the Strait of Hormuz?

The question whether Iran has the military capacity to close the Strait, which is widely debated in the media, is misleading. Iran's goal, as the final resort, would be to destabilise the Persian Gulf and disrupt the flow of oil, causing a significant surge in oil prices that would put pressure on other countries to convince the US to change course.

Last year, US naval intelligence said in a report that the Islamic Revolutionary Guard Corps' (IRGC) naval doctrine was "based on speed, numbers, stealth, survivability, and lethality". The report added that the IRGC had acquired fast attack craft, small boats, anti-ship cruise missiles and mines. Individually, these improvements cannot compete with Western technology.

"However, taken together, they could create an overall capability that is greater than the sum of its parts, particularly when employed in tight operational spaces like the Persian Gulf and Strait of Hormuz," the report said

Iran's supreme leader, Ayatollah Ali Khamenei, will be the final decision-maker on destabilising the Strait of Hormuz. Despite his unwavering political radical stance in words, in practice he has made calculated decisions and - at times - has quietly accepted significant retreats in order to avoid any risk which might jeopardise the survival of the system.

The question whether Iran has the military capacity to close the Strait, which is widely debated in the media, is misleading

In 1998, tension rose between Iran and Afghanistan when the Taliban admitted that they had killed eight Iranian diplomats in Mazar Sharif. Following the incident, the Iranian army and the IRGC amassed 100,000 troops at the Afghanistan border. Iran's then reformist president, Mohammad Khatami, together with almost all top brass, supported the idea of a military response to the Taliban’s crime. Khamenei, however, opposed the attack and it was called off.

Another glaring example is the case of the nuclear crisis. Despite the pressure crippling sanctions imposed on Iran’s economy, primarily during the Obama tenure, when many Iranian politicians argued that Iran should withdraw from the Non-Proliferation Treaty on nuclear weapons (NPT) to get free of its commitments, Iran stayed as a signatory to the treaty over the ten years it took to resolve the crisis.

Khamenei vehemently advocated the policy of "no talks with the US" from the day he took office as the supreme leader of Iran in 1989. However, in 2013, under the immense pressure of the sanctions, he announced a sudden shift in the country’s foreign policy to the doctrine of "heroic flexibility". This paved the path for negotiations with the US that led to the resolution of Iran’s nuclear crisis. Flexibility “in certain circumstances is positive and necessary,” he remarked.

In another outstanding case, three weeks before the historic agreement between Iran and the group of six world powers, Ayatollah Khamenei identified seven red lines that, if crossed, would make a nuclear deal impossible. The nuclear deal reached in July 2015 clearly violated almost all of the red lines. He made no reaction to those reversals.

Shortly after the conclusion of the nuclear deal, Khamenei wrote a letter to Rouhani to indicate that any new sanctions by “the opposing countries in the negotiations,” under any pretext, including "repetitive fake excuses of support for terrorism or human rights," would void the agreement. However, although he continually attacks Trump's move to abandon the deal unilaterally, Iran has not withdrawn from the agreement.

All that said, if a significant reduction of the country's oil revenue, devaluation of the rial, and a surge in the cost of living rock the country with new waves of unrest that jeopardise the survival of the system, a cornered Iran will most likely destabilise the Strait of Hormuz as a last resort.

Perceptions of the IRGC commanders may also contribute to Iran making such a decision. They believe that "the world cannot live even 24 hours without the oil of this region." In other words, they are convinced that military conflict in the Persian Gulf would be brief and the US would have to retreat from its stance.

They also argue that "naval war is different from ground war. In a naval war, once your aircraft carrier is sunk you are defeated." By engaging in an asymmetric naval war "we can sink the American's aircraft carrier in 50 seconds," asserted the IRGC Navy Commander Ali Fadavi.

Photo: A member of Iran's elite Revolutionary Guards chants slogans after attacking a naval vessel during a military drill in the Strait of Hormuz in southern Iran on 25 February 2015 (AFP)