Iran and Trump: What his victory means for the Revolutionary Guard

Shahir Shahidsaless
Trump's win could see the collapse of the nuclear deal and increased tensions with the US, all bad news for Rouhani but good for the IRGC 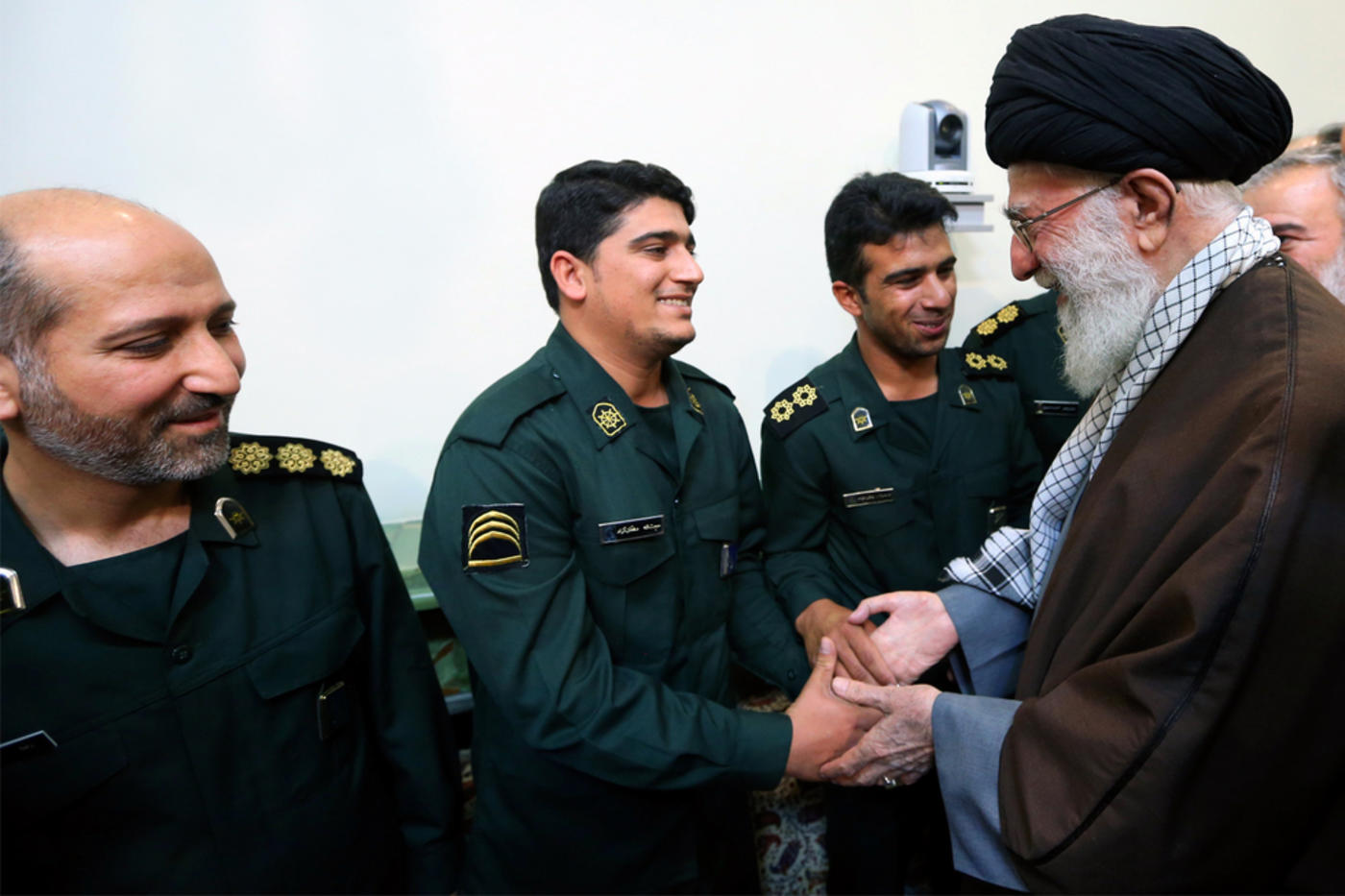 On 14 November, the Islamic Revolutionary Guard Corps (IRGC), in its official political organ, Sobhe Sadeq (The True Dawn), offered several commentaries and analyses regarding Trump’s election and its effect on Iran.

While the pieces offered a facade of neutrality, it is clear that despite the likelihood of the escalation of the conflict with the US, the IRGC is surprisingly content with the outcome of the American elections.

The editorial of the weekly was titled “The fate of the JCPOA as a result of Trump’s election”. The JCPOA (The Joint Comprehensive Plan of Action) is commonly known as the Iran nuclear deal.

The editorial reads, “At the grand level, America’s elections will not affect the Iran political system’s general policies. However, at one level lower - [the American election] – may affect the JCPOA and the [Iranian 2017 presidential] election."

The JCPOA and the upcoming presidential election are precisely the two areas where the conservatives, including the IRGC, are now in a relentless battle with their moderate-reformist opponents.

After reviewing some of Trump and his team members’ stated positions on Iran and the JCPOA, the editorial concluded, “Under these circumstances, with the presence of Trump, in practical terms, nothing [meaningful] will be left of the JCPOA and uncertainty surrounding the agreement will take over.”

Simply put, the IRGC believes that the JCPOA –  which is now perceived as a potential winning card in the hands of President Hassan Rouhani and his moderate supporters in the 2017 presidential election – will crumble once Trump takes office.

Another commentary in Sobha Sadeq provided an analysis on the position of the moderates. The commentary sought to answer the question of “why moderates were excited to see the victory of Democrats and viewed it in line with their own interests”. The analysis offered three reasons.

First, it argued that the administration and its moderate supporters “consider the nuclear agreement their point of strength. Naturally, this current wished the continuation of the Democrats’ rule, especially given the statements that Trump had made about scuttling the deal.”

The second reason, according to the IRGC’s political organ, is that “in the upcoming Iranian election, the economy and people’s livelihoods are the Achilles heel of the current administration.

"While the Rouhani administration has not yet been able to bring a sensible change to the table of the people (by providing more food), they were hopeful that with the victory of Democrats, some major [and positive] developments would occur with regard to the sanctions.

“As a result, they could exit the current stagflationary state of the economy. The election of Trump will not only fail to offer any rays of hope in this respect, but will on the contrary . . . will be pursued even with more vigor.”

The third reason behind the moderates’ support for Hillary Clinton, the IRGC suggests, is that “based on the analysis of some of the reformists and elements close to the administration, the unpredictability that Trump’s election will bring with it will impose a securitised climate around the world. This [moderates believe] will assist the hardliners [who control the security apparatus] to gain the upper hand and defeat their rivals [the administration and the moderates as a whole] who are [naively] optimistic toward the West.”

Regardless of the accuracy of the IRGC’s analyses, during the US elections the newspapers and websites affiliated with or supporting the moderates were clearly against Trump.

Meanwhile, after the election, they were in a clear state of dismay. On the contrary, however, the conservatives, including the IRGC, have thus far been happy and receptive to Trump’s victory. The reasons are as follows:

First, the nuclear deal has since its inception been one of the major battlegrounds between the administration and moderates on the one hand and the radicals, including the IRGC, on the other. The reason is that the implementation of the agreement would take years to complete. Those long years could lead to the improvement of relations between Iran and European countries, and unwittingly soften US-Iran relations. The consequences of such an eventuality could threaten the hardliners’ position in Iran.

With the solidification of the JCPOA, trade and commerce with the West will significantly expand. The natural outcome would be the expansion of the private sector in Iran.

In the years that Iran was under crippling sanctions, particularly during the presidency of Mahmoud Ahmadinejad, the conservative institutions and organisations, primarily the IRGC, began to dominate almost every aspect of economic life in Iran. According to the economist and former outspoken member of parliament, Ahmad Tavakkoli, the IRGC outcompetes the private sector on “unequal terms” because of their power and influence.

When the pictures of John Kerry and Javad Zarif strolling along the riverbank in Geneva during the nuclear negotiations surfaced, they created an earthquake in the conservative camp

Another major consequence would be the rise of the white collar technocrats, who are by nature business-oriented, secular and indifferent about religious values.

As such, because of the uncertainty that Trump and the members of his team have created regarding the smooth implementation of the JCPOA – and even the likelihood of undoing the deal – the IRGC embraces the election of Trump.

Second, the conservative current was extremely worried about the political, economic, and cultural infiltration by the Americans following the potential realisation of the JCPOA.

The discourse of the “American infiltration” developed by Iran’s leader, Ayatollah Ali Khamenei, was relentlessly promoted and advocated by the IRGC following the conclusion of the Iran nuclear deal. They feared (and still do) that the liberal current in the US would build a warm relationship with like-minded individuals in Iran.

When the pictures of John Kerry and Javad Zarif strolling along the riverbank in Geneva during the nuclear negotiations surfaced, they created an earthquake in the conservative camp.

Third, the biggest attraction that Trump’s election may have for the IRGC, which could be seen from the excerpts of the two articles mentioned earlier, is that the moderates could be marginalised in Iran’s politics. This is the case given the likelihood of the intensification of conflict between Iran and the US.

The simple reason here is that the moderates are incapable of espousing bellicose rhetoric. The byproduct of this situation, the IRGC believes, could be Rouhani’s defeat in the 2017 presidential elections, which would result in a large reward for the IRGC.

The IRGC prediction could be accurate. CIA nominee Mike Pompeo has promised to roll back the Iran deal.

But the strongest indication that informs us about the future of US-Iran relations is the book published in July, written by Michael Flynn, Trump’s national security adviser. Toppling the Iranian regime is arguably Flynn’s central concern.

“They are a formidable enemy, and they have been at war with the United States, its friends, and its allies (notably Israel) for nearly 40 years,” Flynn writes.

However, “no American president has called for regime change in Tehran,” he adds.

Photo: A handout picture provided by the office of Iran's Supreme Leader Ayatollah Ali Khamenei on 24 January 2016 shows him (R) greeting a group of Revolutionary Guard officers, who were involved in the detention of US Navy sailors in January (AFP) Inside Iran
The rise of nationalist fervour in Iran
Shahir Shahidsaless