Israel's crackdown on Balad will only make us stronger 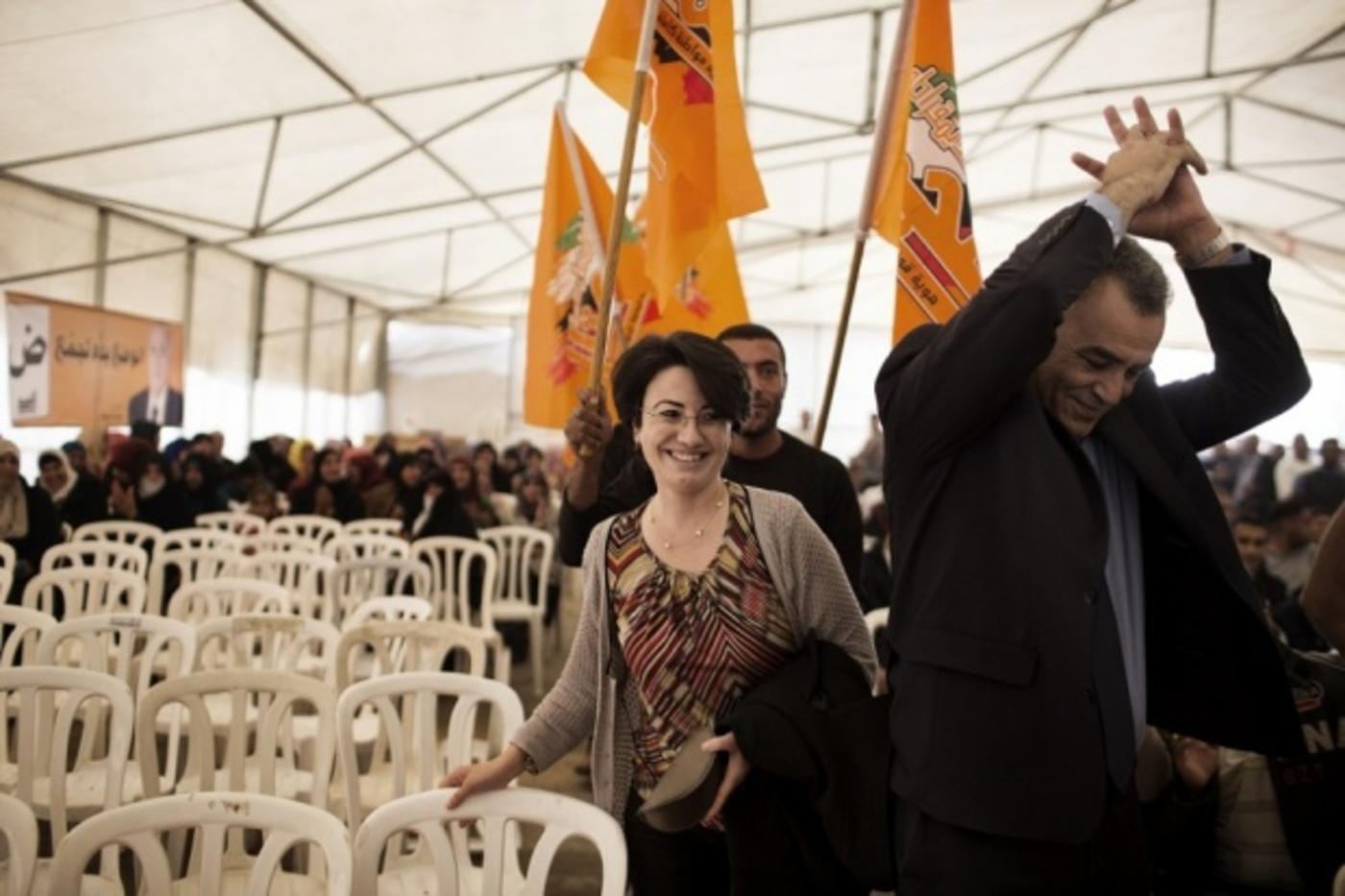 The Israeli police have recently been waging an unprecedented campaign of detentions and investigations against the National Democratic Alliance - also known as the Balad party.

Last month, thousands of police officers waged a campaign of detentions against party activists. They stormed into houses at night and detained 50 party members including leader Awad Abd Al-Fattah and other senior figures including several lawyers.

While the police claim that the Alliance used funds for activities in violation of the Parties Funding Law, we hold that we exercised our legal right to raise donations from the public.

A dispute of this sort is usually handled by the state auditor. Instead, the police have taken the lead on this matter, indicating that we are being subject to a political crackdown.

In the past, during other crackdowns, Israeli authorities tried to portray our activities and political stances as criminal, but their attempts failed and so now comes a shift to try to create a scandal around our financial management.

The current campaign comes in a climate of rampant racism, a time when fascist tendencies are dominant among both political leaders and public opinion within Israel.

However, what truly distinguishes this campaign is that it is being led not by back seat, right-wing Knesset members, but personally by Benjamin Netanyahu.

Why is the prime minister spearheading a campaign of incitement and crackdown?

This is the fourth time Netanyahu has occupied the position of prime minister in Israel. During his previous three administrations, he totally ignored the Palestinian citizens of Israel. He rarely referred to them and only accidentally.

But since the last election in March 2015, he has changed his approach. On the election day itself, he came out in a video clip warning against an imminent danger. “The Arabs are running toward the ballot boxes and the rule of the right is in danger,” he said.

He appealed to the supporters of the right to come out and cast their votes in order to face up to “the danger of the Arab vote”. There are those who say that Likud seats in the Knesset increased by three or four and Netanyahu won the election because of this racist appeal.

Having realised that inciting against Palestinian citizens, their leaders and parties wins him more popularity, Netanyahu has not ceased to fire his loose, racist canon in every occasion and at every opportune moment.

A few short months later, after the Iranian nuclear deal, Netanyahu “lost” the image of Iran as an enemy and, importantly, as a tool for gaining popularity.

The danger of this development lies in the fact that Netanyahu, who has the authority and ability to take action, is never content with rhetoric and statements.

He is the maestro of the orchestra of incitement and political crackdown, the provocateur of public opinion and the masses against “the enemy within”.

It was Netanyahu who campaigned for banning the Islamic Movement. He was the one who pressured the security agencies to withdraw their opposition to that move.

He has also intervened personally to pass racist, anti-democratic and anti-human rights laws.

He attacked Alliance representatives in the Knesset who met with Jerusalem families who were demanding the return of the bodies of their children who were killed.

He was the one who pressured the Knesset’s conduct committee to adopt the decision to suspend deputies Haneen Zoabi and Basil Ghattas from the Knesset.

He was the one who initiated the law of deportation that was approved by the Knesset and which empowers members of Israel’s parliament to expel any Knesset member because of his or her political stances.

Netanyahu’s government is no less extreme than him. Ministers lead campaigns of hostility against Palestinians.

They are joined by many decision makers within the police and other security agencies, senior officials in the state’s various departments and journalists, writers, artists and others who shape public opinion.

As such, those with racist and fascist tendencies penetrate every single position, spot and field and create an environment in which the current crackdown on the Alliance could take place.

Simply put, the Israeli establishment finds it easy to target everything that is associated with the Palestinian citizens of Israel.

Yet, the political crackdown against the Alliance did not start only recently. This has been going on since the October 2000 uprising in which 13 martyrs were shot dead by the police, a day that very much resembled “Bloody Sunday” in Northern Ireland. The Israeli establishment accused the Alliance of creating the atmosphere that led to the uprising.

Subsequently, in 2003, there was an attempt to annul the Alliance’s parliamentary bloc. The attempt came upon a request from the government’s judicial advisor, backed by intelligence reports, that accused the party of “supporting terrorism” for supporting the struggle of the Palestinian people for independence and freedom from occupation.

The Alliance was also accused of seeking to undermine the existence of Israel as a Jewish state because of its slogan “a democratic state for Arab and Jewish citizens on equal footing”. However, after the Central Elections Committee endorsed the annulment of the Alliance, the Israeli High Court repealed the decision with a majority of seven judges to four.

Then came 2007, when the leader of the Alliance, Azmi Bisharah, was targeted with an attempt to fabricate a security dossier against him, forcing him to flee into exile. There were then several attempts to crush the Alliance by banning it as well as through detentions and incitements.

However, the Alliance managed each time to come out stronger and firmer. It would seem that Israel has learned no lessons.

The Israeli establishment perceives the Alliance as a threat because it proposes a national as well as a democratic challenge.

More than one Israeli official has warned that the project of “the citizens’ state” - for which the Alliance has been calling and which emphasises the democratic transition from a Jewish State into “a state for all its citizens” – is based on the internationally accepted principle of citizens’ equality, and may in the long term lead to the end of Israel as a Jewish state.

Hence, the Israeli establishment never ceased, with all its various arms and levers, to target the Alliance with all available means.

The current campaign against the Alliance is influenced by two developments in Israel. The first is the domination of extremist, fascist and racist trends within the government, the establishment and public opinion. The second development is the stringent control over the management of public funds, particularly with regard to political parties and leaders.

Had the second development been the only one, the matter would have ended in the offices of the State Auditor, who is responsible for enforcing the party funding law. Scores of cases similar to that of the Alliance, and even tougher ones, have been brought before it. Usually, the outcome was a financial fine imposed on the concerned party.

All parties in Israel have been through questioning by the State Auditor and they all paid fines. However, within the anti-Palestinian climate and the targeting of their parties and leaders, the matter was referred to the police after a decision taken by the government’s judicial advisor, who is known to be a close associate of Netanyahu and who in the recent past was actually his office manager.

If the police and those behind them think that this is an opportune moment to attack the Alliance, they will soon discover that they have miscalculated and that the Alliance will come out of this challenge stronger

Instead, the outcome has been a mass public rallying around the Alliance. Polls have revealed that the overwhelming majority of Palestinian citizens of Israel consider the campaign against the Alliance to be a political crackdown and not a case of financial “irregularities”.

The establishment thought it could exclude the Alliance and single it out. What happened, in fact, was the exact opposite. All the parties within the Joint List and outside it expressed their solidarity with the Alliance and their support for its defiance of the political crackdown to which it has been subjected.

If the police and those behind them think that this is an opportune moment to attack the Alliance, they will soon discover that they have miscalculated and that the party will come out of this challenge stronger and more committed to the principles of justice it espouses.

Ultimately, the issue is not restricted to the crackdown on the Alliance alone. The issue today is that of an extremist government that adopts a hostile position toward a segment of the state’s citizens just because of their national identity.

It is the issue of a prime minister who wields a loose and dangerous cannon and who perceives even the Palestinian vote to be a threat.

- Jamal Zahalka is a Palestinian citizen of Israel who serves as a member of the Knesset leading the Balad party.

Photo: Knesset members Jamal Zahalka and Haneen Zoabi acknowledge the crowd as they arrive at a political rally in Rahat (AFP)