Joe Gill
Israel's lunar rocket shows it aspires to great power status. But as a colonial ethno-state, can it really become a superpower? 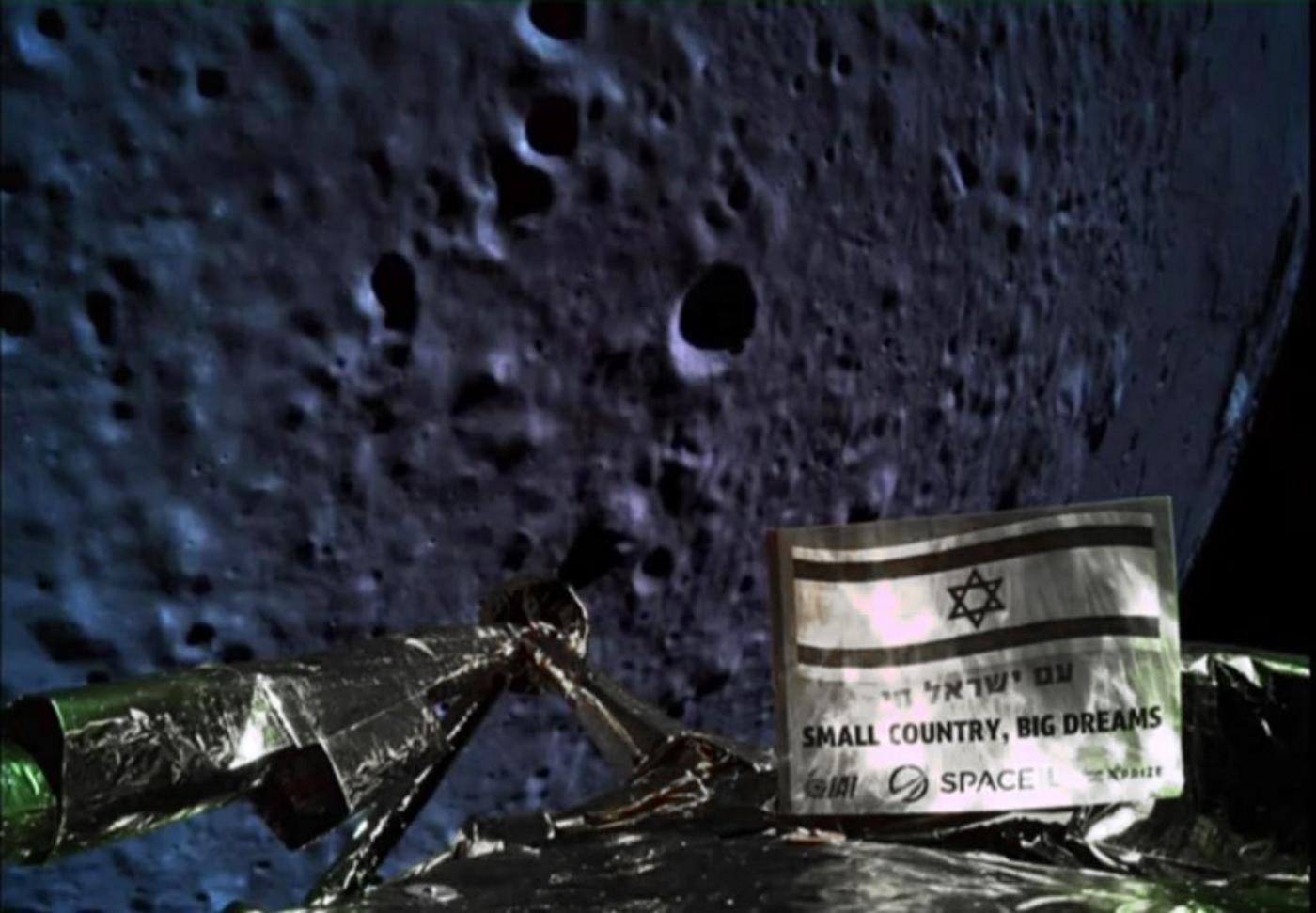 A picture taken by the camera of the Israel Beresheet spacecraft of the moon's surface as the craft approaches and before it crashed during the landing. (AFP)

If the Beresheet spacecraft hadn’t malfunctioned 150 metres from the lunar surface and crashed, Israel would have joined the elite club of nations with a flag on the moon. “Small country, big dreams,” as written on the flag, would have marked the triumph.

Since the 1960s, the moon has been the exclusive domain of the superpowers. The Soviet Union landed Luna 2 on the Earth's nearest neighbour in 1959. Three years later, the United States landed Ranger 4 and, 50 years later, in 2013, China's Chang'e 3 achieved a soft landing.

Crash notwithstanding, the attempt to land on the moon was, for many Israelis, a tremendous achievement, and a change from Israel’s better known specialities of militarism, spying and assassination of its enemies.

Of course landing on the moon is, and always has been a highly political act, just as it was when the Soviet Union and United States competed in the cold-war inspired space race. The moon shot is a powerful signal that, despite its small size, Israel aspires to be a global power, alongside the US, Russia and China.

Conveniently, a lunar rocket uses the same technology as an intercontinental ballistic missile, linking it to Israel’s military-industrial prowess. Not surprisingly, Israel Aerospace Industries is the main partner to SpaceIL, the company set up to take Israel to the moon.

More broadly, the Beresheet was part of Israel’s ambitions as a would-be superpower. Israel already has one of the world’s most powerful militaries, has expanded territorially, just as former empires did, occupying Palestinian and Syrian territory and annexing it, while forging a global network of alliances that gives it political and economic reach.

By these measures, Israel behaves like an imperial power.

Empires, for good reason, don’t have a good reputation these days, linked as they are to colonial plunder, war and racist ideology. In the case of Israel, ethnic cleansing and racial discrimination are built into the DNA of the state.

Israel claims to be a democracy, but, with millions of Palestinians living under occupation, as citizens living under discriminatory laws, or as refugees denied the right of return, it is less Athens than Sparta, the ancient world’s military power par excellence.

Not only does it have settlements (ie colonies) in the West Bank, Israel has a far-reaching network of bilateral economic and military alliances built up over decades that extends to Africa, Asia, Eastern Europe, Latin America and most recently, some Arab Gulf states.

Because it is a “state of the Jewish people”, wherever there is a significant Jewish population, Israel has opportunities to forge influence. This can be seen first of all in the US, where its powerful lobby, as well as many friendly political and business leaders, ensure it has a steadfast ally in Washington.

Given Israel’s massive military superiority in the Middle East, including being the sole nuclear weapon state, it is extraordinary that the US continues to offer “aid” to a country that clearly does not need it. This can only be sustained through the effective capture of the US political system, only now being exposed through the efforts of Ilhan Omar and others.

Of course, the US congresswoman was accused of anti-semitism, and any suggestion that the US is now a client state of Israel will get the same treatment. Yet money does talk.

Casino magnate Sheldon Adelson (“I’m a one-issue person. That issue is Israel”) funded Donald Trump and the Republicans’ 2016 campaign to the tune of $100m, and another $123m during the 2018 mid-terms. That funding has been paid back in full with the most pro-Israel presidency in history.

Elsewhere, Israel has forged strong relationships in Western Europe, and in recent years in former communist states, with political, military and intelligence ties with countries such as Poland, Czech Republic, and Georgia. (Even Ukraine’s new comedian-turned-president is controversially backed by an Israeli billionaire.)

Israel’s unique experience of counter-insurgency against Palestinians resisting its decades-old occupation has given it a special gift for oppressive states everywhere, one that Israel is ready to offer. The darkest element of Israel’s role in the world, aside from its own military occupation of Palestine, is the military assistance, spyware and training it provides to governments engaged in internal wars against indigenous peoples.

This has been seen in Central America (Colombia, Guatemala, El Salvador) where its aid in the suppression of guerrilla movements has led to terrible crimes and violence. Israel has assisted African regimes, supplying weapons even to the genocidal regime in Rwanda in 1994 long after a weapons ban was imposed by the UN.

It has consistently supplied weapons to South Sudan, despite warnings that crimes against humanity are being committed in the new country’s civil war.

Israel, too, of course, remained steadfastly loyal to South Africa’s apartheid regime to the end, with a shared hostility to the anti-colonial movements of the time. Israel has helped India with its suppression of Kashmiris struggling for self-determination – the list goes on.

Regimes engaged in such crimes understandably are eternally thankful to allies that provide them with critical support in the face of a global outcry over human rights abuses and possible sanctions against their actions.

Out of such friendships, Israel has built up its global influence and prestige, even in the face of criticism of its actions and illegal occupation of Palestinian lands.

In the 1930s and after the Holocaust, at least 200,000 Jewish survivors of Nazism moved to Palestine and, following the 1948 war, created a state, purging the country of most of its native population and building a new Sparta, a nation of warriors.

According to the theory of Assabiyah, as laid down by medieval Arabic writer Ibn Khaldun, the power-base of each state depends on its "assabiyah" or group solidarity based on family and community ties, which is found mostly among newly migrating people and emerging nations.

This perfectly describes Israel in its early years as it emerged from the war of 1948. Assabiyah explains that groups in peril can forge a unique tribal unity that enables them to overcome apparently overwhelming odds and to defeat all enemies.

Assabiyah is said to last four generations, by the end of which, corruption and materialism overwhelms the original solidarity of the group, causing it to disintegrate from within. The theory was used to explain the rise and fall of dynasties during the era of the Islamic caliphate, but it also has merit in understanding how modern imperial states rise, and then sometimes fall.

Israel’s imperial ambitions could be said to be approaching a zenith, close to achieving the goals of defeating or isolating its near enemies (the Palestinians, Arab nationalism, and Iran), and uniting the Jewish population around a project of colonial annexation. So far, the global community has acquiesced in this process, despite numerous UN resolutions condemning it.

The question of whether a state governed by supremacist ethnic nationalism can survive long-term may in part depend on whether a critical mass of civic states oppose it, or - as seems to be now unfolding - adopt the very same ethno-nationalism that governs Israel. The existence of a white nationalist alliance, including Trump, Salvini, Bolsonaro and Orban, suggests the latter.

This would be the ultimate and terrifying future that Israel’s empire builders are counting on achieving – unless, like the Israeli moon craft, it crashes and burns.