The curious case of Jack Letts: A study in the mindless mill of UK law 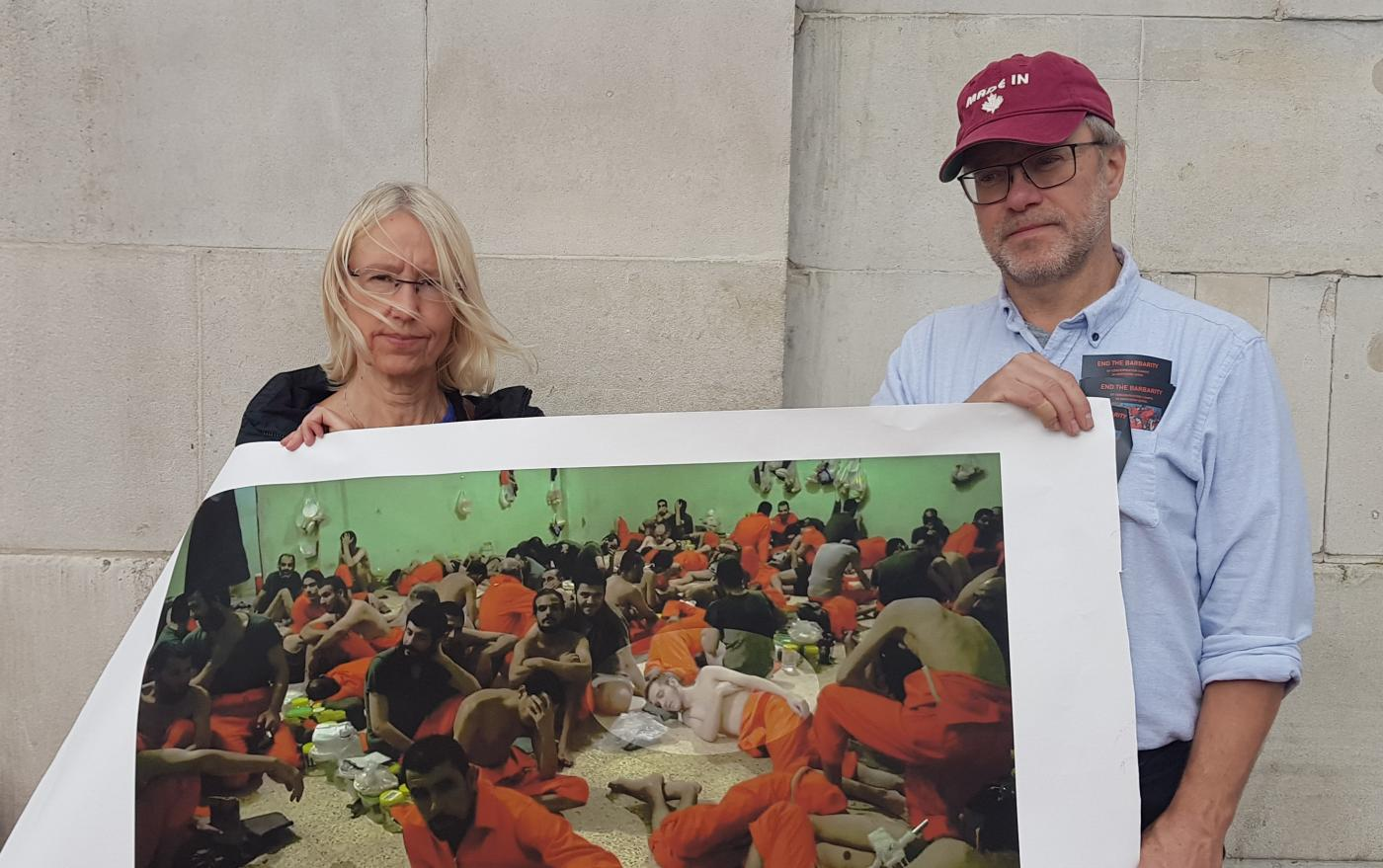 Sally Lane and John Letts carry a picture of their son, Jack, who is held beyond the rule of law in the “Guantanamo on the Euphrates” (MEE/Simon Hooper)

“If the law supposes that, the law is an ass - a idiot. If that’s the eye of the law, the law is a bachelor,” expostulated Mr Bumble in Charles Dickens’ Oliver Twist.

Mr Bumble would take the same view of the law as it has operated in the case of John Letts and Sally Lane, the parents of Jack Letts - and he would be right.

Jack was a middle-class teenager among the spires of Oxford, diagnosed with serious obsessive compulsive disorder. He converted to Islam, and announced that he would go to Kuwait to study Arabic. Unable to concentrate on his classes, from there he thought he would check out what was happening in Syria.

This was a fabulously stupid thing to do, even for a lad like him, but there is no credible evidence that he joined the Islamic State (IS) or fought anyone.

What is clear is that he was arrested and abused three times by IS for shooting off his mouth, and he decided they were a bunch of maniacs peddling a false vision of Islam. He wanted to come home to England. He contacted his parents, John Letts and Sally Lane, and asked them to send money so he could pay a people-smuggler to get him out.

If I received a call from him saying his life was in danger in Syria, I would not just go down to Western Union to send cash; I would likely parachute into Damascus

The British authorities felt it was a crime worthy of years in prison for them to help their son, although they ultimately received a suspended sentence. The British government, and those who enforce such a law, are Mr Bumble’s bumbling bachelors. Indeed, if there was any offence, it was their behaviour.

Let us pretend for a minute that Jack had actually supported IS and then, in a moment of even greater madness, had got involved in fighting. For most parents, this would not change their sense of duty. Ironically, in the pamphlet “Parental Rights and Responsibilities”, the British government admonishes that our “most important roles are to provide a home for the child [and] protect and maintain the child”.

I have a son myself. He is only 11, but I feel sure that when he reaches Jack’s age, he will be capable of remarkable acts of folly - just as I was. If I received a call from him saying his life was in danger in Syria, I would not just go down to Western Union to send cash; I would likely parachute into Damascus. Obviously, a parent should do anything possible to save a child.

Out of sympathy for their plight, I did what I could to help John and Sally back when this saga began in 2016. They were totally open about their desire to send money, and the first police officers involved agreed that was reasonable.

Only when the politicians - in this case, then-Home Secretary Theresa May - inserted themselves did the madness begin. I felt at the time that the vast majority of British parents would support John and Sally, but if we went to the media and explained how Jack needed help to escape IS, the armed group would read the news and then kill him.

We had to try to persuade May without the sledgehammer of the press. She is the daughter of a vicar, so I called a couple of bishops who agreed to write to her and explain the moral reality. I sent the letters on, and never received a substantive reply.

Rather, when John and Sally tried to help their son, the mindless mill of the law ground them into emotional pieces.

The British media dubbed their son “Jihadi Jack”. The British government stripped him of his British passport, and apparently now think he should be left to rot in a cell, and ultimately die, in Syria. And why?

We are told that all 70,000 people held in a series of prisons and camps in northeastern Syria are terrible terrorists who deserve nothing better than a slow death. Only a small number - perhaps 60 - are British, but our politicians say that if we let them back into Britain, the country will spiral into chaos.

'Guantanamo on the Euphrates'

Perhaps Prime Minister Boris Johnson did read Dickens at Eton; certainly, he has not read anything sensible about extremism written in the past 20 years, else he would know he is merely replicating every error made in Guantanamo Bay. Jack is held beyond the rule of law in what is becoming known as the “Guantanamo on the Euphrates”.

When the US set up the original prison in Cuba, the Bush administration insisted that the 780 detainees were the “worst of the worst” terrorists in the world, captured by the US on the battlefields of Afghanistan. They insisted that we should sacrifice the very principles for which we were fighting, including the right to a trial. Guantanamo turned out to be a lie, designed to present a facade that somehow the government was acting decisively in its “war on terror”. At most, five percent of the detainees had actually been captured by the US anywhere near a battlefield.

When I first gained access to the prison in 2004, I discovered an array of nobodies who had been sold to the US for bounties, and then tortured in medieval ways. Yet, when Julian Assange and Wikileaks leaked evidence of this, they were the ones who faced prosecution, rather than the people who committed the torture.

Over the past 18 years, the US military has released 740 of the prisoners (95 percent), each with a finding that he was no threat to the US or its coalition partners. All in all, then, Guantanamo and other secretive US prisons have been a catastrophe, dealing a heavy blow to the country’s reputation.

From 2003 on, Britain levelled pious criticism at the US for this illegal experiment. British politicians condemned Guantanamo, and British judges described the supposed legal system as a “kangaroo court”. Yet here we are, nearly two decades later, with Britain leading the charge to create “Guantanamo on the Euphrates”, outsourcing mistreatment on an industrial scale.

One day, when Jack is allowed a fair trial, I suspect that the world will learn that he is not and never has been a terrorist. But let us take the easy cases first: the children who make up some 9,000 of the 14,000 foreign prisoners in the camps in northeastern Syria (“foreign” defined locally as neither Syrian nor Iraqi). They are certainly not terrorists, although they may be inspired to be if they grow up in such circumstances.

There are perhaps 3,000 foreign women. Shamima Begum was only 19 when she gave birth to her third child; the first two had already died. She begged for help to get little Jarrah home to England. Far from saving an infant, then-Home Secretary Sajid Javid stripped her of her passport and decreed that she should be Bangladesh’s problem, even though she had never been there. Little Jarrah ultimately died.

If we are to prevent people from following the ravings of extremist imams, we have to offer them an alternative that promises a kinder and better society

Jarrah’s blood is on the hands of Javid and others in the British government whose actions have been foolish pandering to populism, as well as being immoral.

How can we expect to turn young Muslim men from the allure of mad imams and mullahs, with their promises of paradise, if we behave heartlessly, in contravention of our principles? Our hypocrisy is the yeast that ferments their hatred.

The government appears to believe that extremism is imported into the UK by bringing people home from Syria, but this is not how it works. Sudesh Amman stabbed two people in Streatham; Usman Khan killed two people on London Bridge; Salih Khater ran three people over near Parliament in his Ford Fiesta; Salman Abedi blew himself up, killing 22 people, at the Manchester Arena.

All shared a deranged notion that to kill non-believers would get them into heaven; none had ever been to Syria, and all had been radicalised by the perception that Britain was a heartless, Islamophobic country.

It is not easy to see a solution to all the world’s problems; we are unlikely to achieve utopia in 2020. But it is easy to see what does not work: the British response to Syria is a recipe for making the world more dangerous.

If we are to prevent people from following the ravings of extremist imams, we have to offer them an alternative that promises a kinder and better society.

Clive Stafford Smith is an international human rights lawyer. He has represented over 300 people facing the death penalty in the USA and elsewhere, and secured the release of 80 prisoners from Guantanamo Bay detention camp, where he continues to represent seven of the remaining 40 detainees.