Sharif Nashashibi
Syrian President Bashar al-Assad paints the uprising as dominated by foreign fighters, but foreigners fighting for him are far better trained, funded and armed 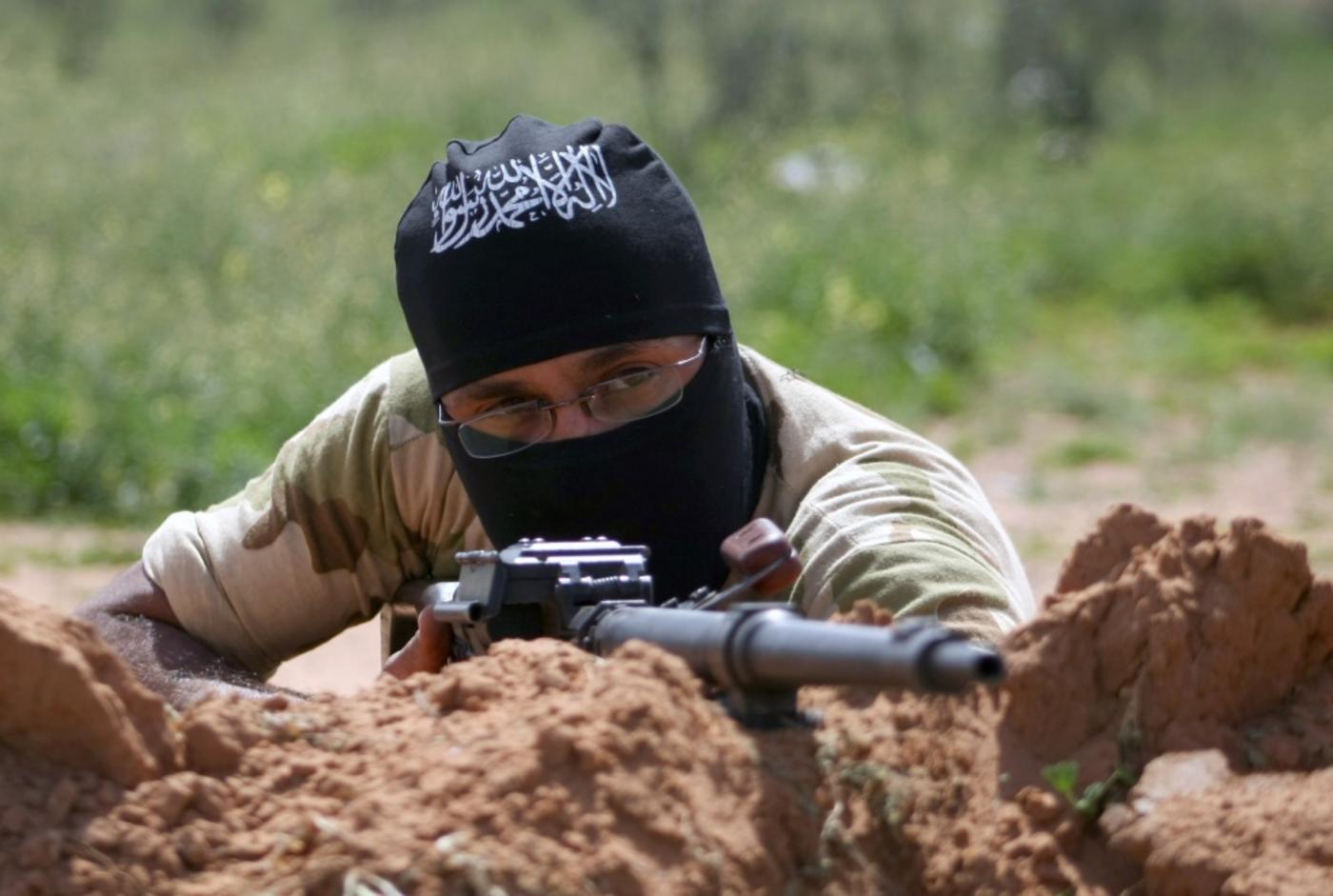 A rise in jihadism and foreign fighters has long dominated the media, political and public discourse over the Syrian conflict. Both issues arouse genuine and legitimate fear across the spectrum of Syrian society. However, the motivations of those who highlight them can differ fundamentally.

In particular, many supporters of Bashar al-Assad seem to raise the issues of jihadism and foreign involvement as convenient excuses to justify their stance.

After all, their support for him pre-dates the presence of jihadists or foreign fighters in Syria (the two are not necessarily one and the same). Ask these apologists if they would back the people's revolution if there were no jihadists or foreigners present, and their response would be diversionary. Likewise, the Syrian regime manipulates these issues to garner support both inside and outside the country.

The major irony is that Assad's followers turn a blind eye to the fact that his regime owes its continued existence to direct foreign military support, from Hezbollah, Iran, Russia, Iraq and other countries. The amount and sophistication of military hardware far outweighs that provided to Syrian rebels.

Furthermore, while most of the focus is on the number of foreign combatants among the opposition, little attention is paid to those who fight alongside regime troops. According to credible estimates, the numbers on both sides are roughly equal.

However, foreigners fighting for Assad are generally far better trained, with thousands from the formidable military forces of Lebanon's Hezbollah and Iran's Islamic Revolutionary Guards Corps. Indeed, a string of recent battlefield successes would not have been possible without Hezbollah, whose fighters have often led attacks.

In addition, Iran's "systematic support" for Assad-aligned Shiite combatants makes them "a more unified force than that of the Sunni foreign fighters who tend to travel alone to Syria and join disparate groups," Erika Solomon, Middle East correspondent for the Financial Times, wrote last month.

To inflate the perception of the extent of foreign participation among rebel groups, the Assad regime and its supporters point to the number of countries from which these fighters come (around 70). This obscures the fact that figures from individual countries can be low (some can even be counted on one or two hands).

Similarly, news reporting often sounds alarmist considering the numbers involved. Just one of many examples is an article by the Times of Israel in December, headlined "Number of Palestinians fighting in Syria on the rise".

This sounds rather ominous, until one reads the actual figures: 20-30 from the Gaza Strip, and 10-15 Israeli Palestinians. That is 30-45 Palestinians, out of a population of almost 7 million, over the course of a conflict that at the time of publication had been ongoing for almost three years. This is hardly worth the sensationalist headline, or perhaps even the article itself.

The Assad regime and its allies portray the Syrian uprising as dominated by foreign fighters. However, the International Centre for the Study of Radicalisation, which has extensively researched the issue of foreign fighters in Syria, stated in December that they do not represent more than 10% of the militant opposition. As such, the armed rebellion is overwhelmingly Syrian.

This presents another major irony. Assad's supporters often refer to the US-led invasion and occupation of Iraq when bringing up foreign involvement in Syria. However, their rhetoric echoes that of former US president George W Bush, former British prime minister Tony Blair and co, who repeatedly claimed - contrary to evidence and logic - that foreigners, not Iraqis, were at the forefront of unrest.

Like the former American and British leaders - and Arab dictatorships past and present - the Assad regime frames its actions as part of a war on Islamist terror, rather than considering the effects of its policies in creating militancy and religious extremism. Even its staunch ally, Russian President Vladimir Putin, has pointed to Assad's culpability.

"Syria as a country was rife for some kind of change," Putin said in June 2013. "The government of Syria should've felt that in due time, and should've undertaken some reform. Had they done that, what we're seeing in Syria today would've never happened."

The regime accepted the Geneva communiqué of June 2012, which stipulated the creation of a transitional government, only to use the Geneva meetings solely as an international platform to disseminate its propaganda about terrorism. Assad and his allies accuse his opponents of continuing the toxic regional legacy of Bush and Blair, while behaving and speaking just as they did.

In a similar vein, the regime simplifies the motivations behind foreigners fighting for the opposition as simply a matter of religious extremism. However, according to the ICSR, "the most commonly cited reasons for joining rebel forces are the horrific images of the conflict, stories about atrocities committed by government forces, and the perceived lack of support from Western and Arab countries."

Furthermore, not all foreign fighters join jihadist groups, and not all those groups are affiliated to al-Qaeda, though their military prowess and extremist ideologies earn them greater attention than secular forces. Jihadist ranks have also swelled due to the increase in Shiite foreigners fighting for Assad, in a tit-for-tat sectarian escalation.

Additionally, the superior supplies, training and financing of jihadist groups compared to their secular counterparts could be very appealing to those who might not share the same worldview, but feel that this would give them much better odds of survival - not to mention battlefield effectiveness - against a larger standing army with more advanced weaponry.

Yet another major irony is that the Assad regime, while bemoaning the rise of jihadism, has been actively complicit in its growth. There are widespread and credible allegations of collusion, from journalists, regime defectors, leaked documents, intelligence services, and jihadists themselves.

The regime released jihadists from its prisons at the start of the revolution, to tarnish the popular, initially peaceful uprising, and garner support against such extremists. There are also numerous reports that the regime is behind, or has at least infiltrated, the Islamic State of Iraq and al-Sham (ISIS), a predominantly foreign jihadist group so extreme that it was disavowed even by al-Qaeda. ISIS and the regime have reportedly struck trade deals on oil and gas.

"By secretly enabling ISIS to carry out brutal terrorist attacks, Assad is able to portray the three-year uprising against his rule as a plot by extremists rather than moderate freedom fighters," The Times' defence editor Deborah Haynes and political correspondent Laura Pitel wrote last week.

"This puts Britain and its allies in a difficult position, as fears grow that any military assistance to the rebels could end up in the hands of Islamist extremists," they added. "The regime regards the group as a strategic ally in certain situations."

Captured ISIS fighters have admitted to the group's relationship with the regime. If this all sounds outlandish, consider that fighting between ISIS and the regime has been conspicuously absent, that the group has been able to cross regime territory without hindrance, and that it is engaged in a full-blown conflict against rebel (even jihadist) forces that has resulted in thousands killed.

Assad has clearly benefitted from the rise of jihadism in Syria, because this has stymied domestic and international backing for the revolution, and has galvanized his own support base. Similarly, Bush and Blair relied on fear of jihadism to shore up domestic support and justify their policies, while ignoring their roles in fuelling extremism. These supposed rivals have much more in common than they would like to admit.

In any case, the presence of jihadists and foreign fighters does not delegitimise the cause for which the Syrian people have risen up. Nor did it in the case of Iraq, or Afghan resistance to Russian occupation in the 1980s, or Bosnian resistance to Serbian aggression in the 1990s, or countless other resistance movements worldwide.

Any protracted war results in extremism and foreign involvement, but that does not negate the cause itself. Those who claim a difference between internal conflicts and those between states ought to realise that someone who is killed, injured, tortured or dispossessed seeks no solace from the perpetrator being a compatriot. Rwandans, who this month marked the 20th anniversary of their genocide - which was enabled by the international community's inaction - will no doubt agree.

If anyone is to blame for foreign involvement in Syria, it is Assad himself, who made conditions ripe for such a scenario. Looking at other Arab Spring states, this only occurred when dictators reacted violently and refused to relinquish power. Tunisia's Zine El Abidine Ben Ali and Egypt's Hosni Mubarak were ousted relatively quickly and without foreign involvement.

On the other hand, NATO and other countries would not have intervened in Libya had Muammar Gaddafi listened to his people instead of killing them. Likewise, if Assad had not reacted so brutally against his own people, there would have been no opportunity for foreigners - let alone jihadists - to get involved, and the uprising would not have become militarised. His crackdown led to demands for his removal, as opposed to initial calls for reform (as happened in Bahrain).

There is always cause to suspect and oppose foreign agendas and actions, particularly given the dark history of imperialism and colonialism in the Arab world. However, dictators cannot use this as a cover to maintain their repression indefinitely and with impunity.

They are no less manipulative and dangerous than the imperialists they condemn. The former are arguably worse, because they oppress their own people rather than representing and empowering them.