Bill Law
Mohammed bin Nayef, the prince who wins a gong for his fight against terror, is in point of fact the architect of a Saudi reign of terror 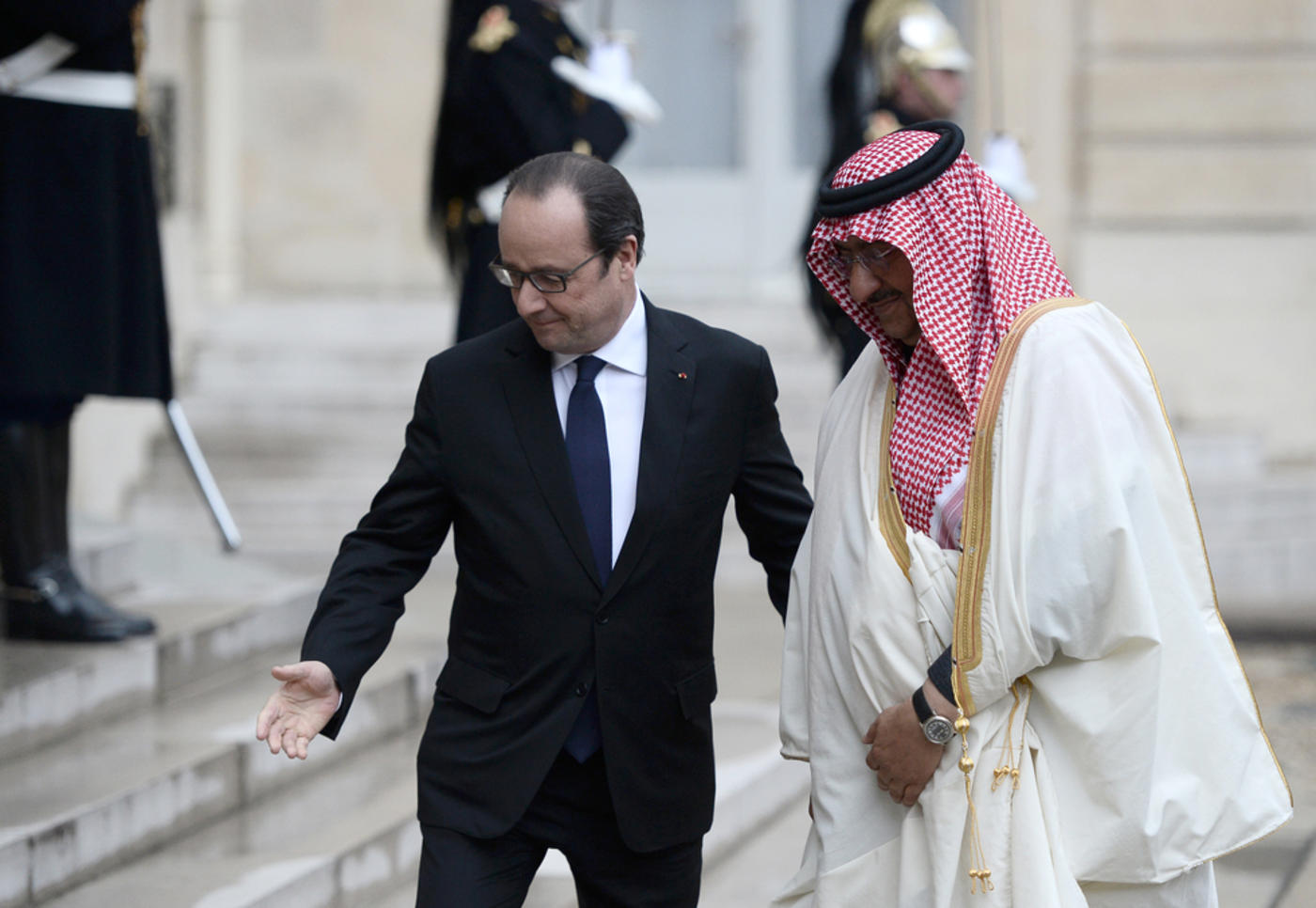 It was smiles all round in Paris on 4 March as French President Francois Hollande bestowed the prestigious Legion d’Honneur on the Saudi Interior Minister and Crown Prince Mohammed bin Nayef for his “efforts in the fight against terrorism and extremism”.

The broad smile on the face of Bin Nayef was no doubt linked to the fact that the gong gives him a bit of a legs up in the struggle for supremacy with the deputy crown prince and favoured son of King Salman, Mohammed bin Salman. He may have been smiling too at the thought that the Americans will be feeling just a little put out. After all, he has been regarded as their man in Riyadh for many years.

But with the Saudis feeling disconcerted about the nuclear deal that Barack Obama engineered with their regional foe Iran, this was a little nudge that the interior minister may have a new “best friend”. Nothing like a bit of jealousy to catch Washington’s attention.

And Francois Hollande? Well, sensing perhaps that France can replace America in the affections of the House of Saud, he has been a very busy man. Nowhere more busy than in the selling of arms in the Gulf.

Last year he signed a $12 billion deal with Mohammed bin Salman who also serves as the kingdom’s defence minister. He sold $7 billion worth of weapons including 24 Rafale fighter jets to Qatar, a country with an indigenous population of less than 300,000. And then there was the matter of the $7 billion worth of French arms to Lebanon, which the Saudis were paying for.

They abruptly pulled the plug on that deal in a fit of pique, one that Hollande no doubt appreciated. The Saudis were annoyed that Lebanon had not condemned the sacking of their embassy in Tehran in the wake of the execution of a leading Saudi Shia cleric, Sheikh Nimr al-Nimr in early January.

Chivalrous to a fault, they didn’t feel it was right that France should be left holding the bag. So the Saudis said they’d take the weapons. After all Saudi Arabia has a war in Yemen that bin Salman launched nearly a year ago, so it is not as if all those guns and ammo were going to sit idle. Pure coincidence I am sure that the Legion d’Honneur was announced mere hours later.

Now, undoubtedly, the sale of weapons has been a huge boost to an otherwise ailing French economy. Experts say it has created 30,000 new jobs in a country with high levels of unemployment. But tipping vast quantities of arms into the world’s most unstable region is not in the cold light of dawn the wisest of strategies to pursue. But pursue it President Hollande has done, with a vengeance.

Along the way, the country that is founded on liberty, equality and fraternity has turned a blind eye to the savage human rights abuses that Saudi Arabia carries out on an almost daily basis. Peaceful critics of the regime like Raif Badawi are sentenced to long terms in jail and the lash for having the temerity to question the absolutism of the House of Saud. In Badawi’s case 10 years and 1000 lashes.

The beheading of Sheikh Nimr and three other Shia from the Eastern Province along with 43 alleged al-Qaeda members and sympathisers seems not to have troubled the French president one little bit.

He conveniently ignored the allegations of torture in detention, forced confessions, the denial of legal representation and a deeply flawed court system that waved through the death sentences. And the request from the prosecutor that after the beheading the sheikh’s corpse be crucified.

Juveniles when arrested, like Ali the nephew of Sheikh Nimr, now sitting on death row? Not a concern. No apparent concern either about allegations that a young man died in custody on 4 March, the same day the president pinned the award on the proud chest of bin Nayef. The authorities say the death was due to “a psychological state of fear,” whatever that means. His family say he was tortured to death.

I don’t think that Hollande is a man who appreciates irony. If he did he would surely have noticed that Mohammed bin Nayef, the prince who wins a gong for his fight against terror, is in point of fact the architect of a Saudi reign of terror, one where he has used mass executions to buttress his position as he vies with the young bin Salman for the throne. Legion d’honneur or Legion d’honte? I don’t know about you but I will opt for the latter.