Mending ‘axis of resistance’: Hamas goes back to square one

Ramzy Baroud
The choices for Hamas are stark as it faces both criticism and praise for its shift in tactics, but survival is the name of the game 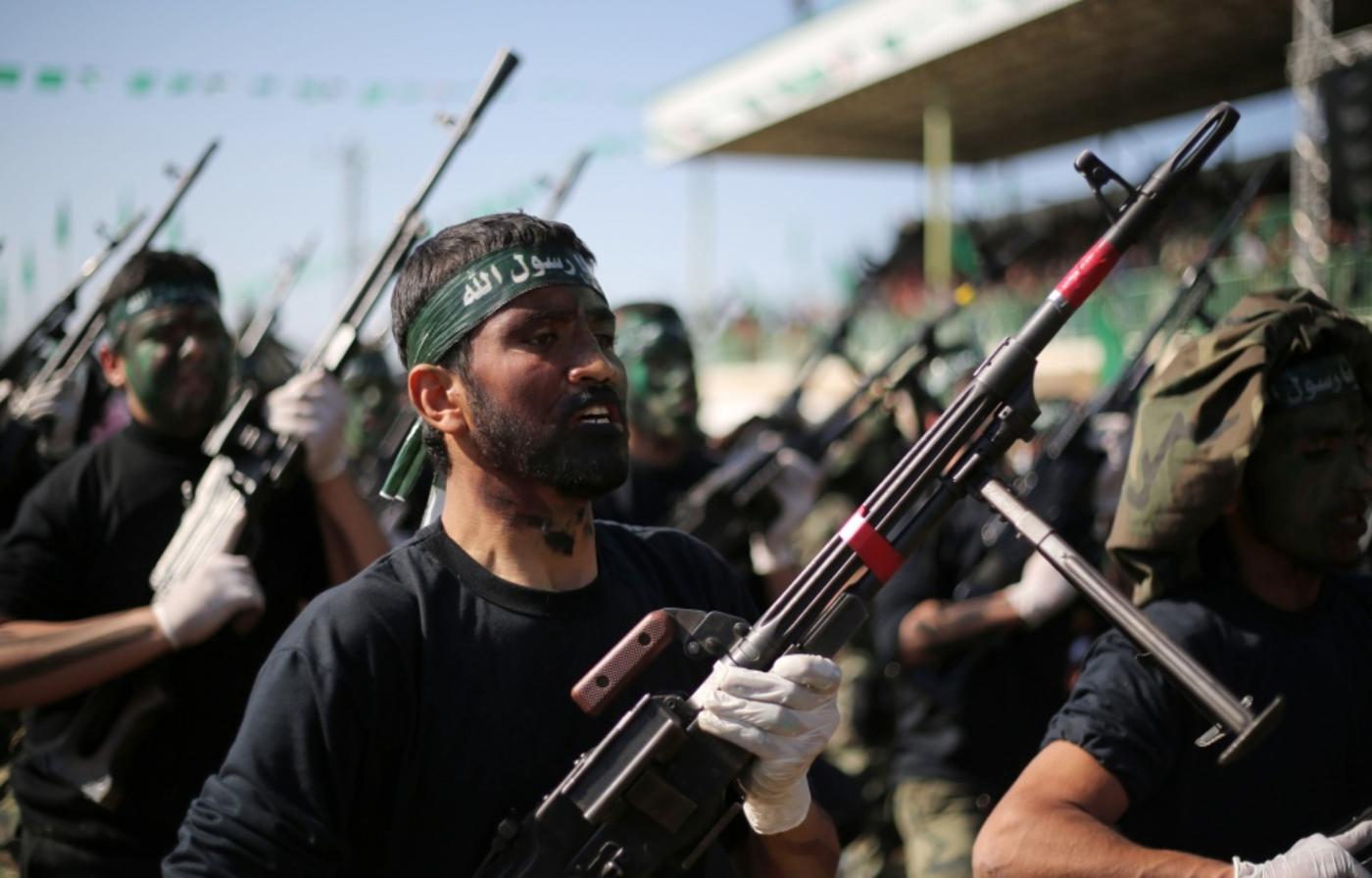 Despite its success in repelling Israeli military advances in Gaza, Hamas’s regional political manoeuvres of recent years are not bearing fruit. Jointly isolated by Israel and other Arab parties, unaided by the Palestinian Authority (PA) of Mahmoud Abbas, the Islamic Resistance Movement is once again facing difficult choices, and it seems to be choosing a cautious return to its old camp of Iran and Hezbollah. The manoeuvre this time is particularly risky.

Hamas’s other options, however, are too limited or simply don’t exist. Few Arab countries seem interested in throwing out Hamas, which is left to cater to Gaza’s needs following the deadliest of Israel’s wars on the Strip. The movement, however, is facing formidable challenges: a mired economy, ruined infrastructure, destroyed Rafah tunnels and a persisting Israeli siege.

The progress of the Hamas-Fatah agreement, followed by the formation of a new government, were meant to be prerequisites to other anticipated moves, including the reformation of the Palestine Liberation Organisation (PLO). The once promising push for unity was interrupted by Israel’s massive war, the so-called Operation Protective Edge, which killed and wounded thousands. The war also left the already distraught Gaza in its worse shape yet.

Instead of speedily setting up government ministries in Gaza, funnelling money into the devastated Strip and beginning the reconstruction process right away, the Ramallah-based government of Rami Hamdallah delayed everything in what could only be understood as political reasoning. Little of the money promised to rebuild Gaza has yet to be delivered anyway. Even Gaza’s creativity in the art of survival is finding its limitations. Without an outlet, however restricted, Gaza will not be able to cope for much longer.

Hamas’s attempt at engaging Egypt as a way of finding an alternative space to break the siege has not achieved results either. Since the advent of now President Abdul Fatah al-Sisi in July 2013, the Egyptian government has perceived the Muslim Brotherhood and Hamas as one and the same, and quickly declared Hamas a terrorist organisation last March.

Even the ongoing war in Sinai that stretches back years is often blamed on Hamas by many in Egyptian media. That demonisation reached its peak when the military wing of Hamas, Izz el-Deen Al-Qassam Brigades recently found itself banned and accused of “terrorism” by an Egyptian court. The brigades’ attempt at defending itself saying that it has never intervened in the affairs of any Arab countries, fell on deaf airs.

With the tunnels destroyed, and a “buffer zone”established and fortified around the Gaza Strip from the Egyptian side of the border, the siege is now complete.

Yet Gaza could have survived, except that the Israeli war has left behind thousands of homeless families, over 11,000 wounded and entrenched in poverty.

A donors’ conference in Cairo last year pledged to rebuild Gaza, but few have delivered. The United Nations and the Arab League are back appealing for aid promises to be met. But even if they do, the US and its allies insist that the money is not channelled through Hamas.

So, what is Hamas to do?

Before the so-called Arab Spring, the region was divided in two political camps. One is known as the “axis of resistance,” also the “rejectionist” camp. It consisted of Iran, Syria, Hezbollah and Hamas. The other is the camp of “moderates” which pools US regional allies. The latter was positioned to offset the former.

Then, the Sunni-Shia divide existed, but was hardly as pronounced as it is today. The existence of Hamas, a Sunni organisation within a largely Shia-group and the clear demarcation of the fight that is between the US-Israel vs. the “axis of resistance” relegated any sectarian difference as insignificant.

Initially, the Arab Spring in 2011 brought ample promise, before it dealt the whole region a massive blow. It wrought war and other bloody conflicts, but also unprecedented political and sectarian polarisation.

Hamas, the product of a national liberation movement with a religious ideology of its own, couldn’t escape the sectarian labelling that has suddenly become the litmus test of Middle East politics.

A war in Syria seemed like a best case scenario for various western powers, including the US and Israel. Other Arab regimes followed suit, injecting massive armaments to the once popular and peaceful uprising, leaving no room for a negotiated settlement to the crises. Iran and Russia soon jumped into the fray, each with a different set of objectives. For Iran, war arguably became its opportunity to extend its regional influence. With Hezbollah joining the fighting - which by then included numerous groups that are home grown and foreign - the Sunni-Shia side of the conflict became palpable.

Neither side would have allowed Hamas to operate outside the ugly sectarian paradigm anyway. The group was expected to take sides, and quickly. Egypt, under deposed President Mohammed Morsi, which was in a position to mediate a region-based solution to the Syria crisis, also took sides. His move severed any chance of leading a negotiated transition to democracy in Syria.

Meanwhile, Palestinians remained disunited even when their unity mattered most. Even the plight of the large Palestinian refugee population in Syria seemed unworthy of a united Palestinian political front. While small groups fought alongside Damascus, others sided with the opposition. Abbas’s PA remained engaged in an inane ‘peace process’ discourse, paying little attention to the thousands of dead and starving Palestinian refugees in Syria.

Hamas’s manoeuvers proved costly. It broke away from the Iran-Syria-Hezbollah axis, joining an Arab front that was united in wanting to see the ousting of the regime of Bashar al-Assad.

But the war grew more grisly on both sides, and the opposition splintered between many groups, including the notoriously violent so-called Islamic State (IS). The calls for democracy and reforms were no longer a dominant discussion as IS declared a Caliphate, and the conflict’s main vocabulary were dominated by sectarian and religious language.

The upheaval in Egypt complicated things further for Hamas. When Morsi was overthrown, Sisi’s backers unleashed a massive war on the Muslim Brotherhood and anyone affiliated with them, Hamas included. Hamas’s gamble didn’t pay off in the least. Further impoverished and isolated, Hamas sought respite by joining forces with Abbas’s Fatah, to end division and seek an outlet from what became a hopeless paradigm.

The other Israeli war on Gaza

Then, Israel attacked Gaza. The media discussion was centred on Hamas’s unproven connection to the kidnapping and killing of three Israeli teenage settlers. That was rarely the story. With Hamas’s departure from the “axis of resistance” and its isolation by the “moderate” Arab camp, the movement was at its weakest. Israeli Prime Minister Benjamin Netanyahu found an opportunity to deliver a final blow to Hamas as he hit Gaza with unmatched brutality. He intended to break Hamas politically before degrading its military capabilities.

The massive destruction of the infrastructure - schools, hospitals, factories, government buildings, shops, tunnels and thousands of homes - was not Israel’s everyday callousness in its treatment of Palestinians. It was meant to ensure that Hamas would have no chance to govern Gaza after the war, and simply collapse under the impossible task to rebuild the Strip, with no aid, no cement and no material lifeline whatsoever.

While the war has itself ended at a high toll of over nearly 2,200 dead Palestinians, an economic war is still being fought at two different fronts: Israel and Egypt. And as the PA in Ramallah lazily ponders its return to Gaza, Hamas has begun looking to Tehran for help.

Arabs were either consumed with their own problems or watched Gaza’s severe punishment by Israel with a mix of dread, amusement and anticipation. Those who urged Hamas to part ways with Iran failed to move forward and fill the existing gap of weapons, money and other material aid. Not only did many in Hamas see that as a betrayal, others who never sought a break up with Iran began pushing the movement to reconsider its political alliances once more.

In fact, the process of mending ties with Iran has been in the making for months, and numerous - however imprecise - signs of some kind of rapprochement between Iran and Hezbollah on one hand, and Hamas on the other, have been adding up towards a foreseeable conclusion.

Aside from the Israeli war on Gaza, three other factors pushed for further cementation of ties between the two parties: one, the return to political consensus among Gulf countries and the pressure on Qatar to distance itself from the brotherhood; two, the lack of any political horizon being offered through the failed or delayed reconciliation with Fatah; and three, the permanent closure of the Rafah border.

When an Israeli helicopter gunship hit a car convoy in the Syrian province of Quneitra on Jan 18, killing six Hezbollah fighters including the son of the legendary leader Imad Mughaniya  - himself killed in a Mossad-CIA operation - along with an Iranian commander, Hamas was quick to offer condolences. The most notable of these messages came from Mohammed al-Deif, the leader of the al-Qassam Brigades. Deif called for the directing of rifles in a joint battle against Israel.

Political messages also poured in, one from former Hamas government Prime Minister Ismail Haniyeh (who is the current deputy chief of the movement’s political bureau). "We declare our full solidarity with Lebanon and the Lebanese resistance," he said, calling for unity against the “principal enemy of the ummah”. This, in addition to Hamas’s leader, Khaled Meshaal’s call for peaceful resistance in Syria, indicating that the Hamas search for a return to the Iran camp was a matter of time.

In fact, that return will happen sooner rather than later, as suggested by Ahmed Yousef, Haniyeh’s former top advisor, and an influential member in the movement. He said that Meshaal should be heading to Tehran soon to meet with top Iranian leaders.

Back to the start

Hamas’s possible return to the Iran camp is likely to be cautious, calculated and also costly. There is a crisis of trust among all parties. For some in Hamas, however, that return was inevitable, if not essential for the survival of the movement as it faces mounting pressures.

But Iran and Hezbollah also need Hamas, at least to break away, genuinely or otherwise from the dominant sectarian narrative that has embroiled the region. Iran and Hezbollah’s image, the latter once seen as the bulwark of resistance, is at an all-time low.

Of course, many are frustrated by Hamas’s shift in tactics, insisting on not seeing the group’s impossible dilemma. The Syria opposition has made its feelings clear.

But for Hamas the choices are stark, and equally difficult. An Arab poet once described such tough choices as “two matters, the sweetest of which is bitter”.

Some will chastise Hamas’s new strategy, others will praise its return to common sense. But for Hamas and Palestinian resistance in Gaza, it is a mere matter of survival.

Photo credit: Palestinian youth hold their weapons during a graduation ceremony as part of a training camp run by the Hamas movement on January 29, 2015 in Khan Yunis, in the southern Gaza Strip. (AFP) 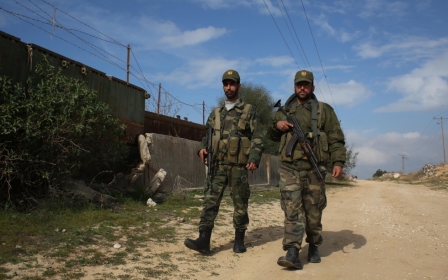