Mohammed Allan at the door of the Israeli Supreme Court 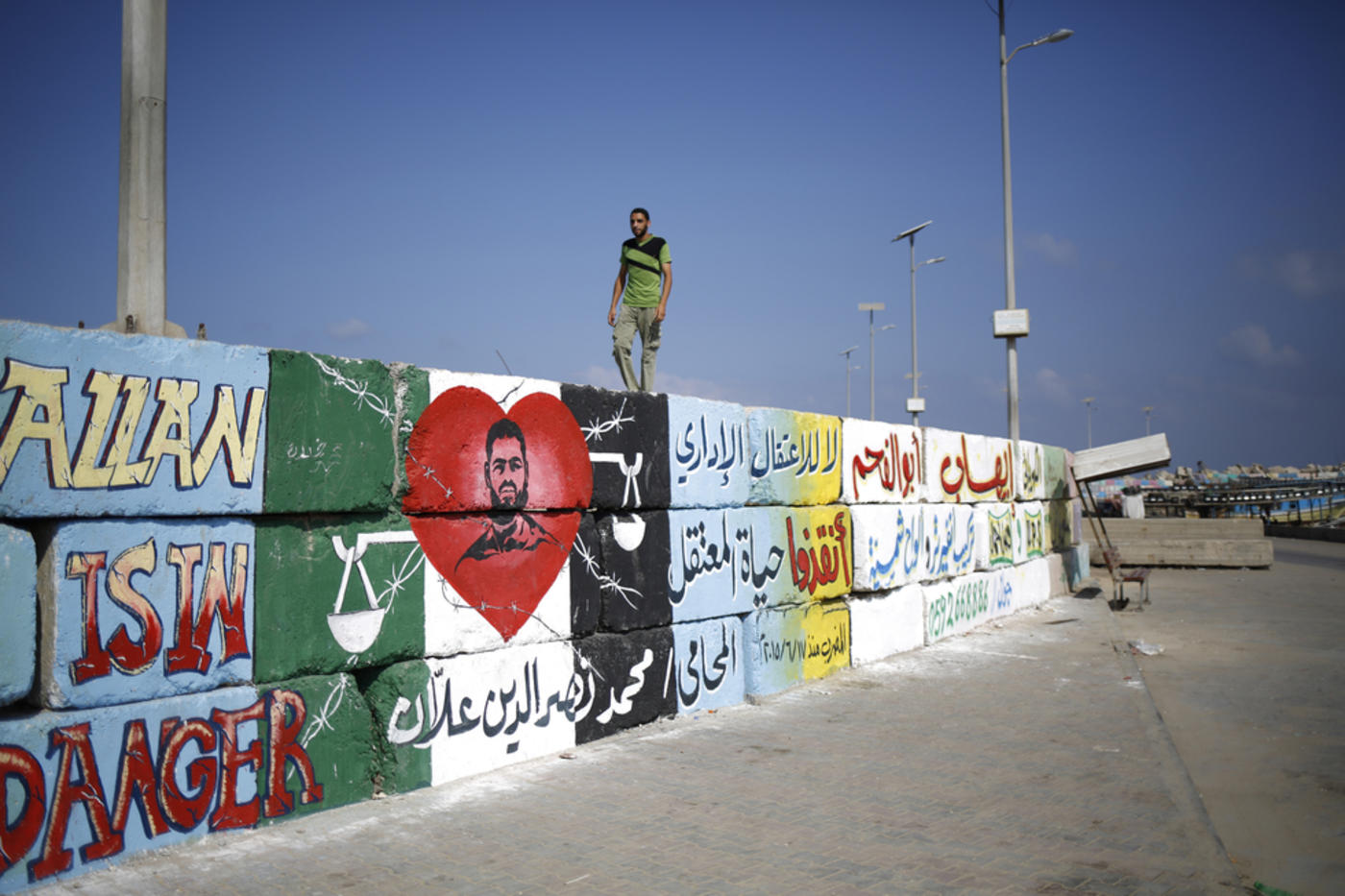 After being on hunger strike for 65 days while held in administrative detention without charge since November 2014, the Palestinian political prisoner Mohammed Allan, fell into a coma and apparently suffered brain damage due to a deficit of vitamin B1.

The three Supreme Court judges who this week presided over a petition demanding his immediate release offered a resolution that wouldn’t shame the most racist colonial courts.

“On the face of it, the plaintiff no longer constitutes a risk due to his medical condition,” the judges averred, and asked the state to release Allan from custody.

This was a perfect solution to the dilemma of Allan’s nonviolent protest. Indeed, if Allan were to end up dying in the hospital, he would not perish as a prisoner in Israeli custody since the court has now formally ordered his release.

The judges added, however, that only “if his health condition is irreversible should he be released immediately”. This means that if the damage to his brain can be successfully treated, then Allan could and likely would be re-detained.

“At this point,” the three Supreme Court judges ruled, “Allan will remain in intensive care at Barzilai hospital [in Israel]. His family members and relatives will be able to visit him as if he were not a prisoner, and they will be subjected to the routine medical instructions regulating all visitors in the hospital.

“If the plaintiff, after his condition has been stabilized, wishes to be transferred to another hospital, he can appeal to the [Israeli Defence Forces] and if there is any problem or disagreement, then the doors of this court remain open.”

This latest ruling on the part of Israel’s highest court of justice begs the question of whether the doors of the Supreme Court should remain open in cases like these. In other words, does Israel’s Supreme Court really protect the human rights of the Palestinian plaintiffs who appeal to it?

The Supreme Court’s “protection” of Allan’s basic human rights must be understood in context of the historical role this institution has played in maintaining Israel’s colonial rule.

Consider the first Intifada (1987-91), during which a plethora of Palestinian and Israeli human rights NGOs first appeared on the political scene and began filing hundreds of petitions to Israel’s highest court against the many and egregious violations of Palestinian human rights.

While these petitions seemed to be challenging government policies, the court almost inevitably acquitted Israel from any responsibility for the daily abuses it was carrying out.

Indeed, over the past three decades Israel’s High Court of Justice has enabled the government to continue carrying out home demolitions; it has authorized holding Palestinians in prison for years on end without trial (administrative detention); it has justified the expropriation of Palestinian land and the deportation of Palestinian leaders and political prisoners; and it has approved Israel’s policy of extra-judicial executions.

In the absence of an international body that can enforce human rights conventions, cause-lawyers have remained trapped in a human rights paradox: the colonized have had to resort to the colonizer’s court in order to seek protection.

Put differently, these lawyers have found themselves requesting that the colonial court secure the human rights of the stateless Palestinians - the very people whose rights were being violated by the colonizing state.

Prominent Israeli human rights lawyer Michael Sfard captured this point when he claimed that the mobilization of human rights within the Israeli legal system has generated a surreal situation that enables the state to criticize itself while effectively producing its own legitimization:

Arguably, internal opposition may lead, eventually, to a symbiosis between resistance movements and the authorities. The authorities need internal opposition to better assess the feasibility and ease of implementing its policies. It needs human rights litigation as a policy “fine-tuner.” This insight is overwhelming: the opposition, when it uses only internal means of combat, becomes part of the practice to which it objects. Its resistance is nicely boxed and is given an official role as a phase in the policy structuring procedure.

Israel’s Supreme Court is structurally embedded in the colonial system and has consistently appropriated the human rights critique, but uses it in order to uphold the colonial state as both legitimate and lawful.

This liberal spectacle, whereby human rights lawyers appear in court and judges arbitrate between plaintiffs and the government institutions that carry out violations, has helped the state to produce an image of morality while refining its colonial practices.

The Allan ruling is no exception to this long and dark history. The release of a prisoner who has incurred brain damage while in custody might look - and was depicted by several mainstream media - as an act of clemency and as evidence that the Israeli political system is concerned with blind justice.

However, Israel’s highest court is actually helping the colonial state resolve the thorny issue of Palestinian hunger strikers. By exonerating the Israeli authorities from any responsibility for Allan’s potential death, while enabling the Israeli army to re-arrest him if his health improves, the court is sending an extremely chilling message to anyone who dares to use the hunger strike as a form of resistance.

For the colonial regime, it is undoubtedly very good that the doors of the Israeli Supreme court remain open.

-Neve Gordon is the author of Israel's Occupation as well as The Human Right to Dominate (with Nicola Perugini, Oxford University Press 2015). You can follow him @nevegordon

-Nicola Perugini is Mellon Postdoctoral Fellow in Italian Studies and Middle East Studies at Brown University and the author of The Human Right to Dominate (with Neve Gordon, Oxford University Press 2015). You can follow him @PeruginiNic

Photo: A Palestinian youth walks over a concrete wall decorated with slogans and drawings in support of Palestinian prisoner Mohammed Allan, who is held by Israel without trial and is on a long-term hunger strike, on 20 August 2015 in Gaza City (AFP).