My missing family in Syria: Naming and shaming in Yarmouk

Ramzy Baroud
We must remember that there are still 18,000 people trapped in Yarmouk, and even if it is untimely, we must do something - anything 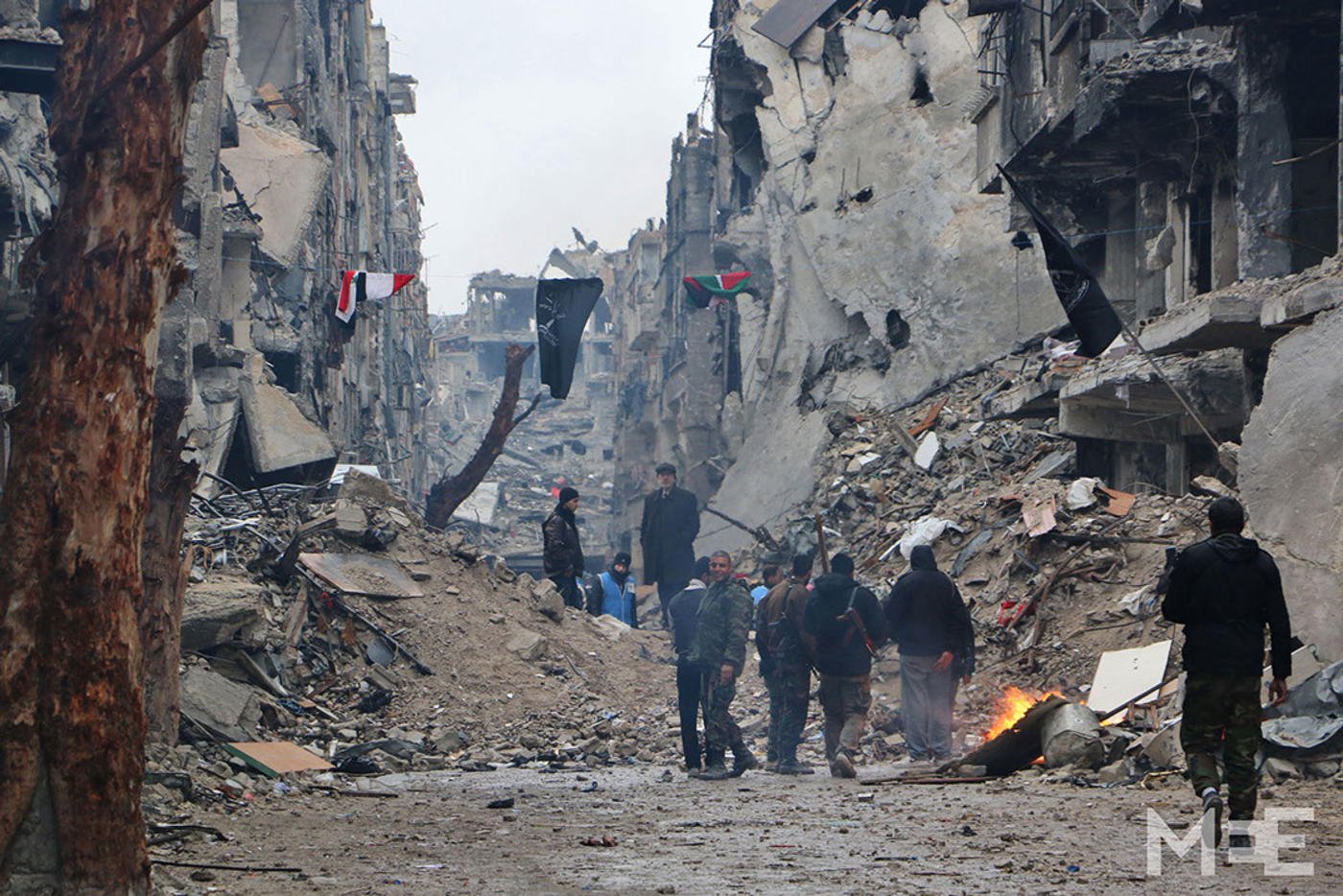 Members of my family in Syria’s Yarmouk went missing many months ago. We have no idea who is dead and who is alive. Unlike my other uncle and his children in Libya, who fled the NATO war and turned up alive but hiding in some desert a few months later, my uncle’s family in Syria disappeared completely as if ingested by a black hole, to a whole different dimension.

I chose the “black hole” analogy, as opposed to the one used by UN Secretary-General Ban Ki-moon - "the deepest circle of hell" - which he recently uttered in reference to the plight of Palestinians in Yarmouk following the advances made by the notorious Islamic State (IS) militias in early April. If there is any justice in the hereafter, no Palestinian refugee - even those who failed to pray five times a day or go to church every Sunday - deserves to be in any “circle of hell”, deep or shallow. The suffering they have endured in this world since the founding of Israel atop their towns and villages in Palestine some 66 years ago is enough to redeem their collective sins, past and present.

For now, however, justice remains elusive. The refugees of Yarmouk - whose population once exceeded 250,000, dwindling throughout the Syrian civil war to 18,000 - is a microcosm of the story of a whole nation, whose perpetual pain shames us all, none excluded.

Palestinian refugees (some displaced several times) who escaped the Syrian war to Lebanon, Jordan or are displaced within Syria itself, are experiencing the cruel reality under the harsh and inhospitable terrains of war and Arab regimes. Many of those who remained in Yarmouk were torn to shreds by the barrel bombs of the Syrian army, or victimised – and now beheaded - by the malicious, violent groupings that control the camp, including the al-Nusra Front, and as of late, IS.

Those who have somehow managed to escape bodily injury are starving. The starvation in Yarmouk is also the responsibility of all parties involved, and the “inhumane conditions” under which they subsist – especially since December 2012 – is a badge of shame on the forehead of the international community in general, and the Arab League in particular.

These are some of the culprits in the suffering of Yarmouk:

Israel bears direct responsibility in the plight of the refugees in Yarmouk, as they do the five million other refugees across the Middle East. The refugees of Yarmouk are mostly the descendants of Palestinian refugees from historic Palestine, especially the northern towns, including Safad, which is now inside Israel. The camp was established in 1957, nearly a decade after the Nakba – the “Catastrophe” of 1948, which saw the expulsion of nearly a million refugees from Palestine. It was meant to be a temporary shelter, but it became a permanent home. Its residents never abandoned their right of return to Palestine, a right enshrined in UN resolution 194.

Israel knows that the memory of the refugees is its greatest enemy, so when the Palestinian leadership requested that Israel allow the Yarmouk refugees to move to the West Bank, Israeli Prime Minister Benjamin Netanyahu had a condition: that they renounce their right of return. Palestinians refused. The refugees would have refused. History has shown that Palestinians would endure untold suffering and not abandon their rights in Palestine. The fact that Netanyahu would place such a condition is not just a testimony to Israel’s fear of Palestinian memory, but the political opportunism and sheer ruthlessness of the Israeli government.

The PA was established in 1994 based on a clear charter where a small group of Palestinians “returned” to the occupied territories, set up a few institutions and siphoned billions of dollars in international aid in exchange for abandoning the right of return for Palestinian refugees, and ceding any claim on real Palestinian sovereignty and nationhood. The Palestinian nation became whatever Palestine's political elite wished it to be. The new “Palestine” had no definable boundaries, excluded the diaspora community and millions of refugees, saw Palestinians in Israel as an internal Israeli matter, split the West Bank and Gaza, and had no patience for any democratic endeavour.

Not only had it completely abandoned the refugees, save a few passing references, the PA left Lebanon's half-million refugees to fend for themselves, locked in refugee camps that were not allowed to grow or develop, with no voice or political representation.

When the civil war in Syria began to quickly engulf the refugees, and although such a reality was to be expected, President Mahmoud Abbas’s authority did so little, as if the matter was of no importance or had no bearing on the Palestinian people as a whole. True, Abbas made a few statements calling on Syrians to spare the refugees from what was essentially a Syrian struggle, but not much more. When IS took over the camp, Abbas dispatched his labour minister, Ahmad Majdalani, to Syria. The latter made a statement that the factions and the Syrian regime would unite against IS - which, if true, is likely to ensure the demise of hundreds more.

If Abbas had invested 10 percent of the energy he spent on his “government’s” media battle against Hamas or a tiny share of his investment in the frivolous “peace process”, he could have at least garnered the needed international attention and backing to treat the plight of Palestinian refugees in Syria’s Yarmouk with a degree of urgency. Instead, they were left to die alone, as the PA remained safe in its Ramallah bubble, unhindered by the cries of orphans, widows and bleeding men.

When rebels seized Yarmouk in December 2012, President Bashar al-Assad's forces shelled the camp without mercy while Syrian media never ceased to speak about liberating Jerusalem. The contradictions between words and deeds when it comes to Palestine is an Arab syndrome that has afflicted every single Arab government and ruler since Palestine became the “Palestine question” and the Palestinians became the “refugee problem”.

Syria is no exception, but Assad, like his father Hafez before him, is particularly savvy in utilising Palestine as a rallying cry aimed solely at legitimising his regime while posing as a revolutionary force fighting colonialism and imperialism. Palestinians will never forget the siege and massacre of Tel al-Zaatar (where Palestinian refugees in Lebanon were besieged, butchered but also starved as a result of a siege and massacre carried out by right-wing Lebanese militias and the Syrian army in 1976), as they will not forget or forgive what is taking place in Yarmouk today.

The Syrian army imposed a siege on Yarmouk over two years ago to strangle the rebels. Many of the camp’s homes were turned to rubble because of Assad’s barrel bombs, shells and airstrikes. Trapped within a hermetic siege and infighting militias, suffering from the lack of food, having no access to electricity or running water or medical supplies, the refugees perished slowly and painfully. Meanwhile, Syrian television is still hatching plans to liberate Palestine.

The so-called Free Syria Army (FSA) should have never entered Yarmouk, no matter how desperate they were for an advantage in their war against Assad. It was criminally irresponsible considering the fact that, unlike Syrian refugees, Palestinians had nowhere to go and no one to turn to. The FSA invited the wrath of the regime, and couldn’t even control the camp, which fell into the hands of various militias that are plotting and bargaining amongst each other to defeat their enemies, who could possibly become their allies in their next pathetic street battles for control over the camp.

The access that IS gained in Yarmouk was reportedly facilitated by the al-Nusra Front, which is an enemy of IS in all places but Yarmouk. Nusra is hoping to use IS to defeat the mostly local resistance in the camp, arranged by Aknaf Beit al-Maqdis, before handing the reins of the besieged camp back to the al-Qaeda affiliated group. And while criminal gangs are politicking and bartering, Palestinian refugees are dying in droves.

The UN and Arab League

Cries for help have been echoing from Yarmouk for years, and yet none have been heeded. Recently, the UN Security Council decided to hold a meeting and discuss the situation there as if the matter was not a top priority years ago. Grandstanding and concerned press statements aside, the UN has largely abandoned the refugees. The budget for UNRWA, which looks after the nearly 60 Palestinian refugee camps across Palestine and the Middle East, has shrunk so significantly, the agency often finds itself on the verge of bankruptcy.

The UN refugee agency, better funded and equipped to deal with crises, does little for the Palestinian refugees in Syria. Promises of funds for UNRWA, which frankly could have done much better to raise awareness and confront the international community over their disregard for the refugees, are rarely met.

The Arab League is even more responsible. The League was largely established to unite Arab efforts to respond to the crisis in Palestine, and was supposed to be a stalwart defender of Palestinians and their rights. But the Arabs too have disowned Palestinians as they are intently focused on conflicts of more strategic interests - setting up an Arab army with clear sectarian intentions and aimed largely at settling scores.

The Syrian conflict has introduced great polarisation within a community that once seemed united for Palestinian rights. Those who took the side of the Syrian regime wouldn’t concede for a moment that the Syrian government could have done more to lessen the suffering in the camp. Those who are anti-Assad insist that the entire evil deed is the doing of him and his allies.

Not only does such polarisation lead to irrational conclusions as it selects particular pieces of evidence and ignores others. It is also counterproductive. This useless fight reflects a disappointing fact that many who consider themselves “pro-Palestinians” are driven by groupthink and slogans, not human rights; self-serving ideologies, not the well-being of the refugees; stubborn politics, not justice in its purest forms.

Those people, too, are responsible for wasting time, confusing the discussion and wasting energies that could have been used to create a well-organised international campaign to raise awareness, funds and practical mechanisms of support to help Yarmouk in particular, and Palestinians refugees in Syria in general.

It behoves us all to take a moment to hang our heads in silence, but also shame, over what has befallen Yarmouk, as we stood, watching, bickering and doing nothing.

But we ought to remember that there are still 18,000 trapped in Yarmouk and organise on their behalf so that, even if it is untimely, we need do something. Anything.

Photo: Palestinian refugees try to warm themselves by a fire amidst the rubble in Yarmouk (MEE) 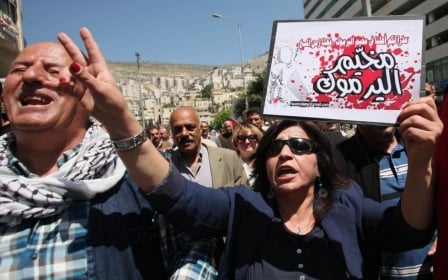