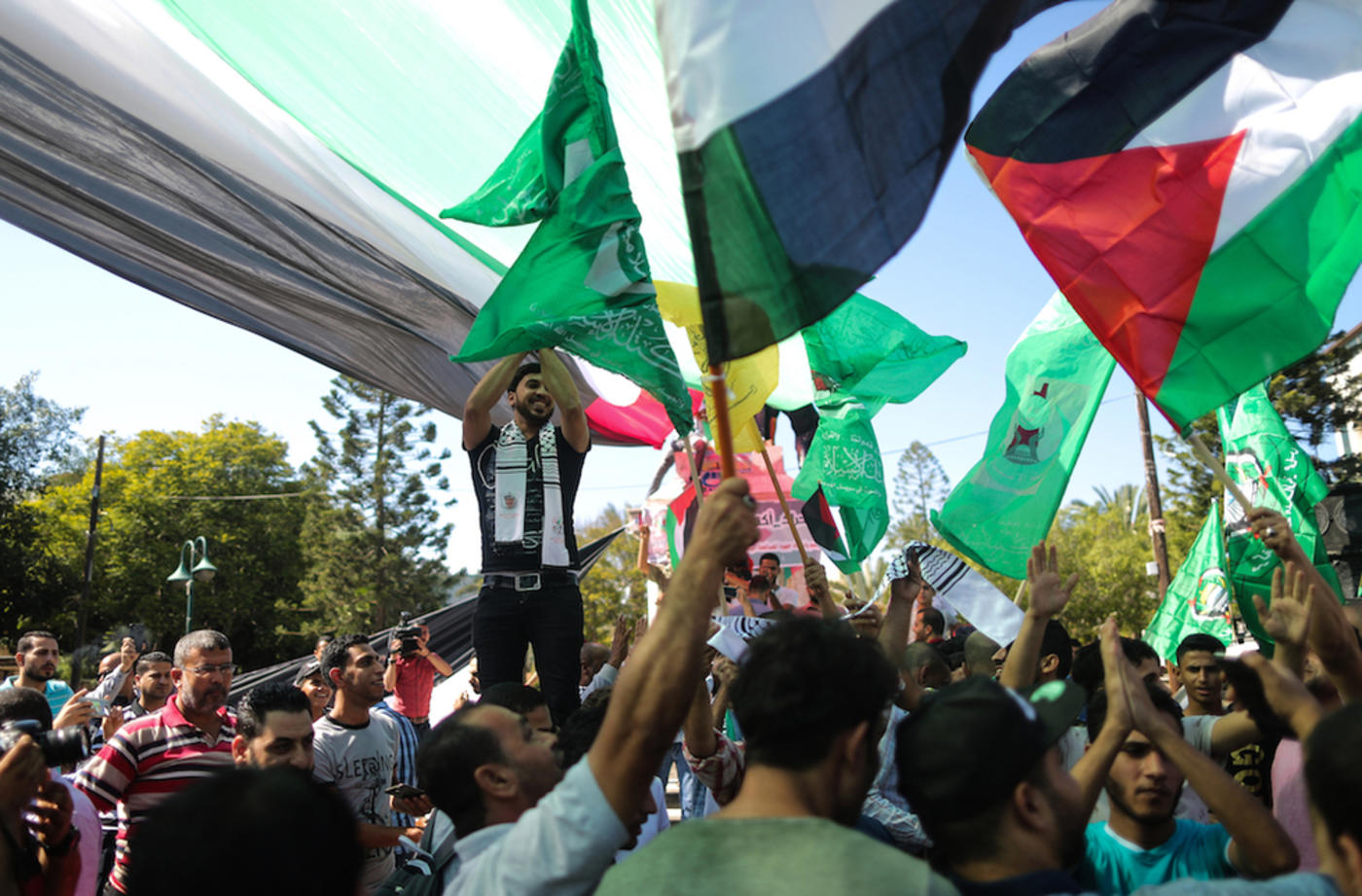 Back in March of 2011, after a round of talks between Hamas and Fatah, Palestinian President Mahmoud Abbas announced his desire to go to Gaza to sign a reconciliation agreement.

Netanyahu threatened sanctions and international pressure against the Palestinians. Immediately after the Abbas announcement, Israel bombed Gaza, theoretically in response to Qassam rocket fire toward Israel that had injured no one.

This was the signal for a round of Israeli bombings and Palestinian rockets. Alex Fishman, defence analyst for Yedioth Aharonoth, wrote at the time that the escalation was “deliberate” on Israel’s part.

There is no proof that the escalation was intentional and aimed at preventing a Palestinian reconciliation, and there were other reasons for its failure at that point apart from Israel’s involvement, but the negative Israeli stance was very clear.

In April 2014, it was the same story again. Fatah and Hamas signed an agreement to establish a national unity government. Saying once again that Abbas had “chosen Hamas and not peace,” Netanyahu declared a freeze on diplomatic contacts then underway with the Palestinians.

Immediately after the Palestinian declaration, the Israeli military launched missiles at Gaza. A short time later, three Israeli youths were kidnapped and murdered in the West Bank, and a few weeks thereafter came the lethal Operation Protective Edge.

Again, there is no direct proof that Israel launched that campaign to scuttle the establishment of a Palestinian unity government, and there is no proof that the agreement failed because of Israel, but clearly in both cases Netanyahu’s opposition to intra-Palestinian reconciliation was very blatant.

Israel also has reservations about the Palestinian reconciliation agreement signed this past Thursday (12 October) in Cairo.

A bulletin from the Prime Minister’s Office stated that Israel is opposed to an agreement that does not meet the conditions set by the Quartet (the USA, Russia, the EU and the UN), which back in 2006 had conditioned recognition of a Palestinian government with Hamas participation on the latter’s acceptance of international accords already signed by the PLO, plus recognition of and an end to terrorism against Israel.

While Israel’s announcement on Thursday “corrected” the Quartet’s conditions by adding a demand that Hamas disarm, most conspicuous was the absence of the kinds of threats made in 2011 and 2014.

“Israel will assess developments in the field and act accordingly,” was the wording now. Nothing about sanctions or military actions. Israel has suddenly turned into a neutral observer.

So what caused Israel’s moderate response this time? It is clear that Netanyahu himself did not change his stance in principle regarding intra-Palestinian rapprochement.

Only a few days ago, at the outset of the current round of talks between Hamas and Fatah, he spoke sharply against the possibility of a reconciliation “coming at the expense of [Israel’s] existence.”

Netanyahu at that point also added a new requirement, never before present in the Quartet’s conditions: the cessation of all ties with Iran – a condition that obviously neither Abbas nor Hamas can ever accept. Miraculously, this condition somehow failed to appear in Thursday’s statement from the Prime Minister’s Office.

One explanation for the relative silence is that Netanyahu is currently busy with other matters. All signs point to the likelihood that when the current series of Jewish holidays ends in mid-October, Netanyahu will be summoned for another interrogation regarding what is now known as the “gifts affair.”

Based on media accounts, at least, the police will very soon conclude this investigation and recommend that Netanyahu be indicted – quite possibly for having accepted a bribe.

Adding to that an indictment for alleged irregularities at the Prime Minister’s residence against Netanyahu’s wife Sara, who is very involved in her husband’s political life, and one can see that Netanyahu’s most immediate concern is not whether Palestinian reconciliation succeeds or fails – something that in any event will require a few months to become clear – but whether he himself will be obliged quite soon to step down.

The moderate response may also be explained by the negligible interested displayed by the Israeli public and Israeli media regarding the Palestinian issue. A relatively long period of relative quiet on the security front, the ongoing weakness of Abbas in the international and domestic arenas, and the sense – shared by the Palestinians themselves – that the world has lost interest in the Palestinian story, have demoted the Palestinian issue on Israel’s agenda, certainly among the Jewish public.

Israel’s two largest-circulation newspapers – the right-wing Israel Today and the center-left Yedioth Aharonoth – featured headlines in the last couple of days about Israel’s possible withdrawal from UNESCO, while the matter of Palestinian reconciliation was shunted aside.

These explanations, however, are certainly partial. In Israel’s view, the schism between Gaza and the West Bank is a very longstanding interest. It predates even the split between Hamas and Fatah; it predates the Oslo accords.

As far back as 1991, during the first Intifada, Israel was instituting harsh restrictions on the ability of Gaza residents to access the West Bank and vice versa. The Oslo accords ostensibly recognized the West Bank and the Gaza as a single political entity, and spoke of open traffic between the two areas, but apart from a single year – 1999 – this article of the accords has never been implemented.

Since the start of the second Intifada, even this diminished connection ceased, and Israel prevented nearly all travel by Palestinians between the Gaza Strip and the West Bank. Israel’s unilateral withdrawal from Gaza in 2005, known in Israel as the “disengagement,” only reinforced this trend.

The withdrawal from Gaza, as noted at that time by Dov Weisglass, a close advisor to Israel’s then prime minister Ariel Sharon, was meant to insure “enough formaldehyde so that there would be no political process with the Palestinians…”

Sharon, says one observer who was then a senior figure in Israel’s Foreign Ministry, believed that in exchange for relinquishing Gaza, he could gain the West Bank. That was Sharon’s working assumption; it was in that context that the split between the West Bank and Gaza was so essential to him.

Ehud Olmert as prime minister, and Tzipi Livni as foreign minister, according to this same source, adopted this approach wholly. Free movement between the West Bank and the Gaza Strip was viewed as contradictory to this approach. Hence, the source says, all the talks about enabling free movement between the two areas failed, despite stern pressure exerted at the time by then US Secretary of State Condoleezza Rice.

In this sense, the takeover by Hamas of the Gaza Strip in 2007 was providential for Israel. It offered Israel a perfect justification for eliminating access between the West Bank and Gaza. The international community could not oppose it when even the Palestinian Authority favored it.

This situation enabled the Israeli siege on Gaza and lent legitimacy to heavy Israeli bombardment of the Strip, from Cast Lead in 2009 through Protective Edge in 2014.

It is difficult to suppose that the moderate Israeli response to reconciliation this time indicates a real change in approach. Israel has profited twice from the split between Hamas in Gaza and Fatah in the West Bank.

Palestinian territory was cut in two, which reinforced Israel’s grip on the West Bank and enabled Israeli settlement expansion. Moreover the political power of Abbas and his government in the international arena was greatly diminished, because they could not present themselves as speaking on behalf of all Palestinians. This perception is not about to change.

What is now different, evidently, is Israel’s increasing dependence on Egypt. Under President Abdel Fattah al-Sisi, the security connection between the two countries has never been closer.

The media say that Sisi and Netanyahu talk regularly by telephone. The Egyptian president even agreed to meet with Netanyahu in front of cameras during the last UN General Assembly session in New York.

This connection has allowed Israel freedom of action with the Palestinians, without even a political process for the sake of appearance. It comes at a price, however.

The moment Egypt decided that its own interests demanded the subjugating of Gaza to the Palestinian Authority and thus also a reconciliation between Fatah and Hamas, Israel could not be perceived as derailing the reconciliation process in advance.

It would destroy the dream of a “Sunni alliance” between Saudia Arabia, Egypt and the Gulf States, and Israel – a dream cultivated by Netanyahu over the last few years. Hence Israel has also ignored the fact that it was Egypt that pressured Abbas – according to reports coming from Cairo – into relinquishing his demand for “one authority, one weapon,” i.e., the disarming of Hamas.

All the reports suggest that Egypt asked Israel to maintain a low profile. A similar request, apparently, came from the US administration. Ahmed Yousef, an adviser to Hamas leader Ismail Haniya, told the New York Times that the Egyptians got a green light from the Trump administration. Trump adviser Jason Greenblatt said only, at the end of August, that the Palestinian Authority “has to take responsibility for Gaza.”

The big question is whether Israel’s relative silence indicates a broader deal forged among Trump, Sisi and Saudi Crown Prince Mohammad bin Salman for a regional arrangement, the supreme goal of which is an alliance against Iran but could also encompass a solution to the Israeli-Palestinian conflict.

Many Palestinian commentators suspect that this is precisely the plan: to force the Palestinians to pay the price of such an alliance via an agreement they do not want: for example, a Palestinian state with temporary borders, without Area C that comprises 60 percent of the West Bank, without Jerusalem and without the right of return.

But the chances of that appear negligible. Even if the Trump administration really does put such a plan on the table, which does not seem all that reasonable at the moment, given Trump’s difficulties in Washington, it is hard to see how Netanyahu could persuade his right-wing government to participate in a regional peace conference the goal of which is to create an independent Palestinian state, however small and crippled.

The rapprochement with Hamas will make such a mission absolutely impossible. Even if he greatly wished it, Netanyahu won’t be able to persuade Naftali Bennett, head of the Jewish Home party, or the other right-wing ministers to sit at the same table with a Palestinian delegation in which Hamas is, directly or indirectly, a partner.

This doesn’t mean that Israel will sit on the sidelines and allow the reconciliation process to move forward to its consummation.

As Thursday’s official statement noted, Israel “will assess developments” while hoping that Palestinian reconciliation fails, as it failed in 2011 and 2014. In any case, even if the reconciliation succeeds, it is hard to see Israel lifting the siege on Gaza or allowing free movement between Gaza and the West Bank.

For that to occur, something foundational in the power relations between Israel, the American administration and the Palestinians has to change. And there is no sign of that now on the horizon.

Photo: Palestinians wave the flags of Egypt, Palestine, Fatah and Hamas as they gather in Gaza City to celebrate after rival Palestinian factions Hamas and Fatah reached an agreement on ending a decade-long split following talks mediated (AFP) 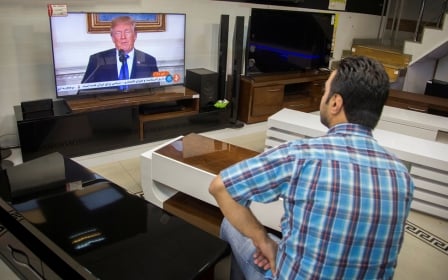