Palestinians must agree on a unity deal – now more than ever 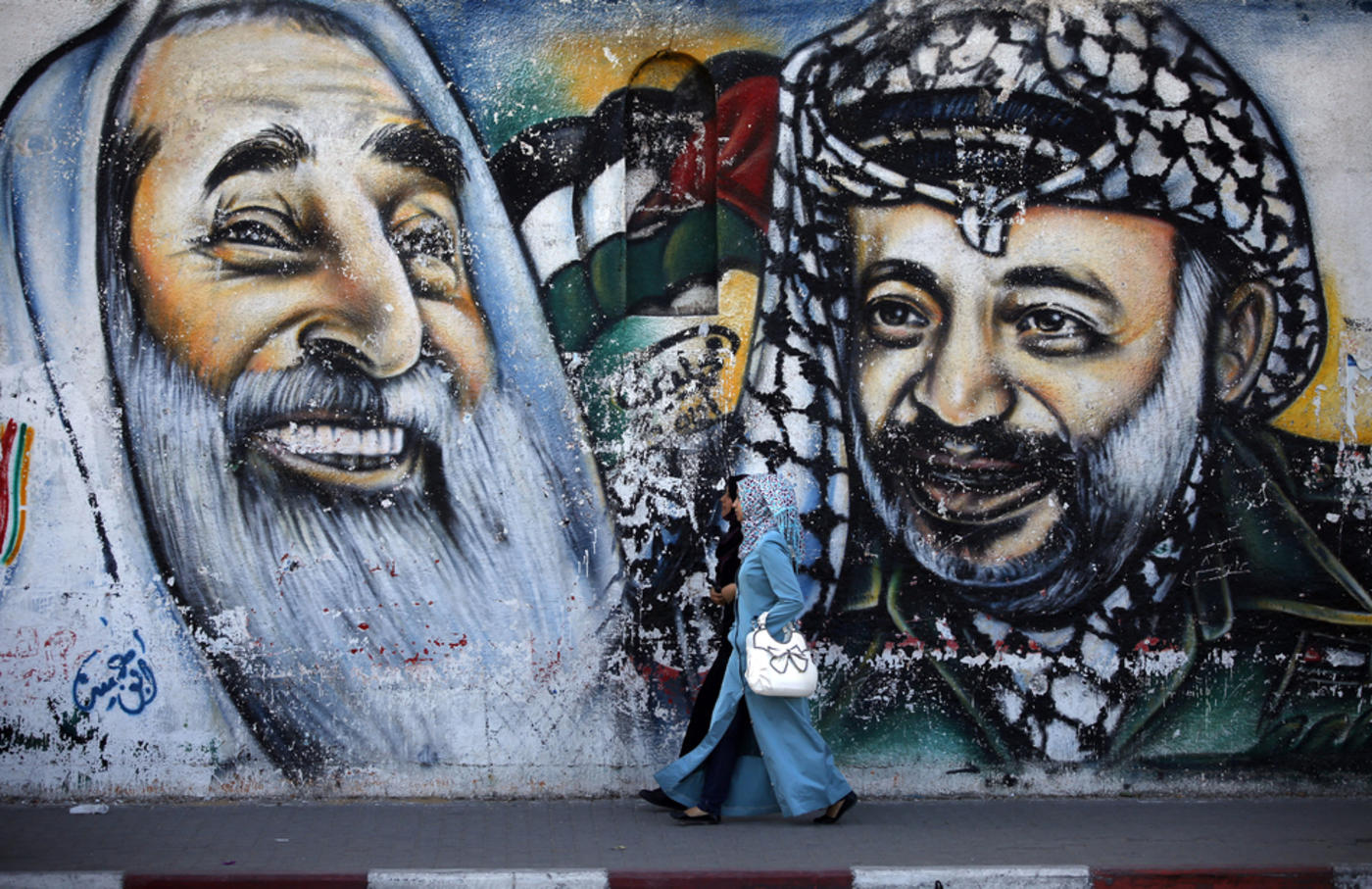 The Palestinian Authority (PA), led by President Mahmoud Abbas, feels under pressure. On one side you have a moribund "peace process" with the Israeli occupier. On the other hand, Palestinians in the occupied West Bank are engaged in a small-scale uprising against Israelis.

In the besieged Gaza Strip, Hamas is under pressure too. Palestinians there barely recover from one Israeli military onslaught before being subjected to another. The prolonged suffering of Gazans has had a negative impact on Hamas's support base.

Most Palestinians want their leaders to overcome their major differences and agree on a unity deal that will last. But after several failed reconciliation attempts in the past, there is little wonder that many Palestinians did not hold their breath when representatives from Fatah and Hamas met in Doha recently.

Hamas believes in armed struggle as the way to liberate Palestine - without objecting to having a Palestinian state based on the 1967 borders – whereas Fatah adheres to a negotiated peaceful resolution with the Israelis. This strategic chasm made a real reconciliation a wishful desire, even if short-term deals have occurred.

A history of accord and disaccord

Going back to the early years of disharmony, the 1990s Oslo Accords gave the Palestinian Liberation Organisation (PLO) a right to establish an interim authority with civil and security functions, which drew the line between the political agendas of the two camps. The PA's heavy-handed policy of incarceration and torture against Hamas supporters, who challenged the PA-Israel's high-level security coordination, fanned the strife between the rivals.

The Second Intifada (2000-2005) pushed the opposing groups to put aside their differences as Israel was committing atrocities against their people as a whole. Representatives from 12 factions including Hamas and Fatah signed a one-year-long ceasefire agreement in Cairo in March 2005 and formulated an understanding over the need to hold legislative elections, restructure the PLO, and establish dialogue as the only means to defuse internal discords.

But that pact was not to survive for long. The parliamentary elections of 2006 saw a sweeping victory for Hamas, once believed to be not cut out for democracy. The trade of blame resumed again as Hamas accused Fatah of refusing to share power.

A couple of deals followed to heal the rift. The Prisoner's Document of June 2006 came after the tensions took a bloody course. Known as the Cairo accord, it was the launching pad for unity restoration and called for a joint front to challenge Israel's aggression. The Mecca agreement of February 2007, which materialised after infighting and rows over power sharing intensified, resulted in the formation of the first unity government – which collapsed in June 2007. Hamas took control of Gaza accusing Fatah of plotting to stage a coup.

Yemen's former president Ali Abdullah Saleh put forward an initiative in February 2008 to revoke the institutional split and restore unity, but the efforts were in vain. Contention reigned until the three-week Israeli Operation Cast Lead in December 2008.

A string of agreements and documents were inked afterwards but remained on paper. Some were signed in Cairo in September 2009, April 2011, May 2012 and January 2013. One was signed in Doha in February 2012 and another in Gaza 2014. If anything fruitful was yielded by these agreements, it was obviously talk, talk and talk. The goodwill embedded in the provisions of these deals served only as a painkiller for the Palestinian public, and a subject of media consumption.

One possible reason for the repeated failures could be in their details. For instance, the word "resistance," mentioned in most reconciliation drafts, is a highly charged term. Fatah views resistance in the sense that all peoples under occupation have a right to; something as old as the history of its national struggle, but that there is no harm in suspending it in favour of the diplomatic approach.

This pragmatic definition translates the movement's shift from armed struggle before Oslo into the pursuit of open-ended peace-making and international legitimacy as the only means to independence.

Hamas, on the other hand, recognises resistance in its entirety, but puts the "military" before the political. The movement has been dedicated to liberating pre-1948 Palestine, despite the fact that its home-made weapons proved futile and counterproductive as compared to the lethal arsenal of the Middle East's strongest army of Israel. The effect of Hamas's resistance is most likely seen at home, where its popularity originates.

Hamas out of choices

The effects of the economic blockade of the Gaza Strip drowned out all the calls for resistance. Unemployment reached 40 percent, ranking the highest worldwide, poverty surpassed 40 percent, and depression among youth has been alarming. Alien to the conservative society, suicide attempts lately have been on the rise. Rizeq Abu Sitta, a civil servant, was the latest to attempt suicide by climbing up a cellular network tower because of poverty.

Above all, last summer's offensive which killed more than 2,200 people and left more 100,000 homeless - let alone an unknown amount of trauma among the population - aggravated the situation. Internationally, Hamas had also lost support due to its backing for the Arab Spring uprisings. According to the Ministry of Interior, the Rafah border with Egypt operated for only 21 days in 2015.

Beside these persistent problems, Hamas's quest for unity underlies a need to do away with the outstanding burden of its 50,000 employees, who have been partially paid since the movement's funds were squeezed by tunnel shutdown and lost allies. By refusing to remove its appointed staff from the Rafah border crossing - to hand it over to the PA – Hamas is seen by some as partly responsible for the stagnation.

On the other hand, Fatah-led PA, though achieving some diplomatic success with symbolic recognitions of the Palestine state from parliaments worldwide, continues to lose legitimacy. The enhanced security coordination with Israel, including arrests of activists participating or suspected to be involved in the current uprising, has dealt a blow to the PA's popularity, not least a rising Palestinian death toll. Adding to this, a skyrocketing number of around 2,000 Palestinians have been detained since the violence escalated in October, according to prisoners' rights groups.

Over 20 years of negotiations have resulted only in an intensified process of settlement building in the occupied West Bank and Jerusalem, the rise of settler bullying, and undermining of the Palestinian economy due to access restrictions over Area C that occupies 61 percent of the territory, hence the actual nipping of the two-state solution.

A poll on 1,200 Palestinians conducted by a Ramallah-based firm showed that Fatah enjoyed the backing of only 34 percent in the West Bank and that 35 percent are dissatisfied with the performance of Abbas, up from 31 percent in a previous poll.

PA in the balance

The security advisor to the Palestinian president, Majid Faraj, in an interview with US television said the PA has foiled 200 attacks against Israel and will continue its security coordination with it to prevent extremism, a statement which was harshly condemned by Hamas as "an insult to the struggle and sacrifices of Palestinians".

However, this cannot obscure the fact that despair is growing among elements of the Palestinian security establishment itself. In December 2015, Mazan Ariva, an intelligence officer, fired at an Israeli soldier at Hizma checkpoint near Ramallah, marking the first attempt by PA security recruits against Israelis. On 31 January, Amjad Sukari, a Palestinian policeman, was killed after an alleged shooting at a checkpoint near the illegal settlement of Beit El on the outskirts of Ramallah. Sukari was honoured with a military funeral organised by the police service in what analysts described as a move to maintain the nationalistic appearance of the security subcontractor PA.

The restless atmosphere led the Israeli army to impose a military cordon around the city of Ramallah, the political capital of the hoped-for state and the lifeline of the frail Palestinian economy in the occupied West Bank, for the first time since the 1994 creation of the Palestinian Authority. A Fatah official soon warned against an Israeli plan to gradually enforce a second version of the infamous “Operation Defensive Shield,” a full-scale onslaught that swept the West Bank and Gaza Strip in 2002.

It's not strange that Dr Rami al-Hamdallah, unanimously nominated for the premiership in the 2014 talks around the formation of his government, said he is ready to resign to allow for a “new unity government”.

However, Palestinians received the news about the recent Doha talks with utter coldness, although leaders from both sides sounded hopeful in media appearances. Yet in the same statements, the optimism was soon juxtaposed with cautionary doubts about the other's possible manoeuvres. Ziad al-Zaza, Hamas's deputy prime minister, considered the Doha meetings as “an opportunity to prove good intentions towards reconciliation and water down all the obstacles that stand in its way”. In a similar tone, senior Fatah official Amin Maqbool said that “there is a real opportunity to achieve reconciliation… but it requires the will and sincere intentions.”

The current rounds are apparently centred on “implementation mechanisms,” rather than introducing anything new. This begs the important question of what the functions of the coming government would be. Whatever it may be, Palestinians are in need – now more than ever – of a unified message from their leaders.

- Abdulrahman Murad is a freelance Palestinian journalist from Gaza currently based in London, where he is doing a Master's degree in Media Communications and Critical Practice.