The populist crescent: Marine Le Pen and the lands of Lebanon

Makram Rabah
Many Lebanese see Le Pen's visit as a triumph for persecuted Christians, but they should question her solutions for terrorism - and dual nationals 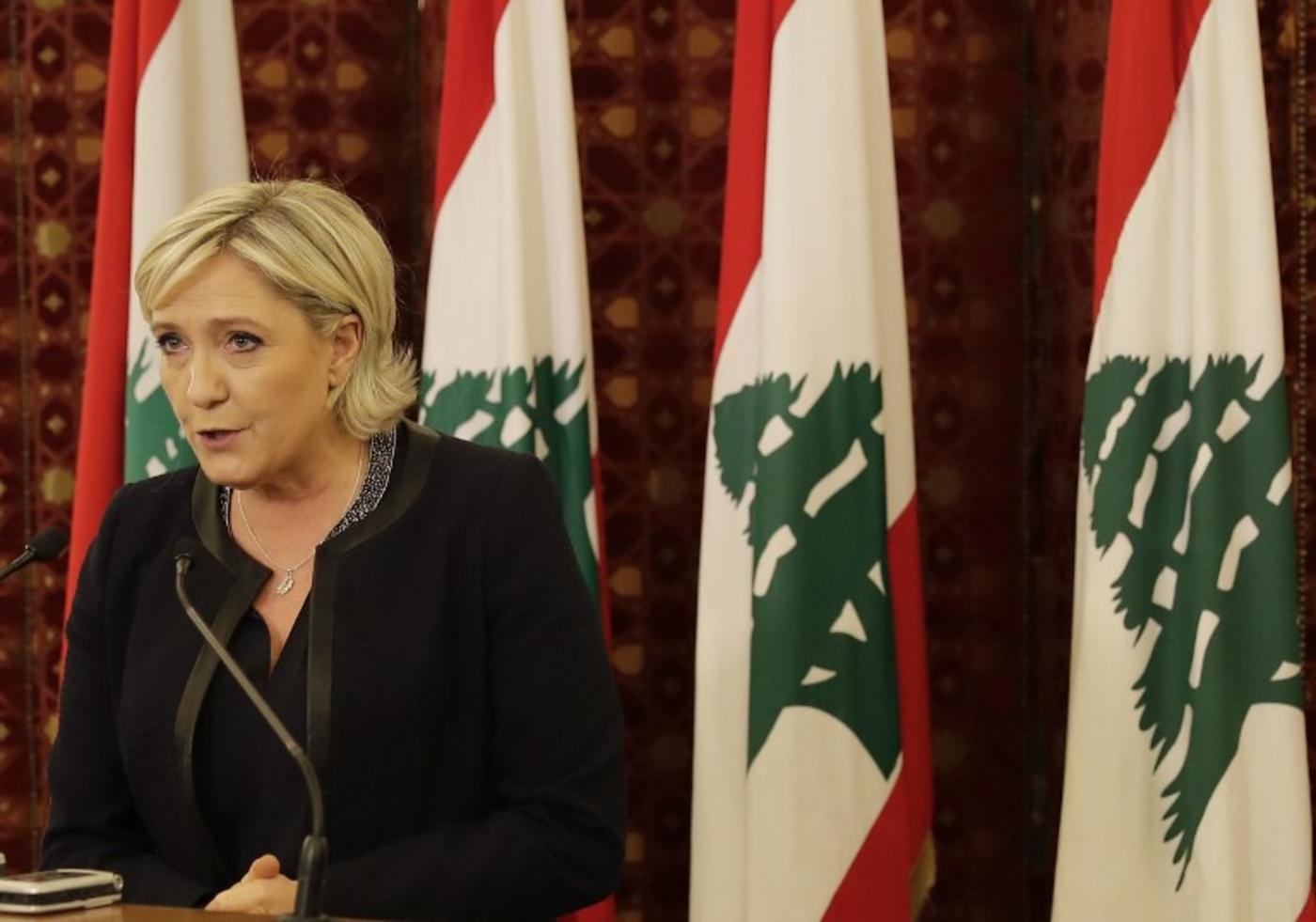 It is not uncommon for contenders for France’s parliament or even the president to visit Lebanon and campaign for its almost 20,000 dual nationals.

Just last week, Emmanuel Macron, the centrist candidate for the presidency visited Beirut in a brief two-day trip to meet some of the local politicians, but more importantly to lobby the French diaspora in Lebanon who will soon go to the polls to determine France’s next president.

Any Lebanese dual national who wishes to vote for Le Pen should remember that once she is in office, there is nothing to stop her from honouring her election pledges including removing their citizenship

The banality of such trips, however, does not apply to Marine Le Pen, the French far-right leader and one of the three presidential candidates who arrived in Lebanon on Sunday night in a somewhat high-profile visit which included a meeting with the Lebanese President Michel Aoun as well as other senior officials.

She was scheduled to meet Lebanon's highest Sunni authority, Grand Mufti Sheikh Abdel-Latif Derian, on Tuesday, but refused to wear a head scarf and left without meeting him.

Much of the controversy from Le Pen’s visit stems from the fact that this is the first time she is meeting with a foreign head of state, something which she has failed to do across Europe, even with leaders who are classically branded as right-wing.

Marine Le Pen in Lebanon: I refuse to wear headscarf to meet cleric

German Chancellor Angela Merkel and Canadian Parti Québécois are just a few who, despite their right-wing credentials, have slammed Le Pen for her racist and fascist comments.

Le Pen's visit, however, goes beyond much of the controversy that merely surrounds her as an icon for right-wing European xenophobia and Islamophobia to a more ominous plan which, if successful, would have dire repercussions not only on Lebanon but also on the status of the Christians in the Levant.

In the context of Michel Aoun's and Donald Trump's electoral victory, many Lebanese see Le Pen's trip as a triumph and resurgence for persecuted Christians in Lebanon and the Levant.

A front to oppose Sunni Islam?

It is no coincidence that Le Pen’s first recreational stop upon her arrival to Lebanon was to the ancient port city Byblos, a place celebrated for its Phoenician past which many like to use to dismiss the Muslim elements of the country.

Beyond the ceremonial aspect of this trip, Le Pen’s trip is meant to communicate several messages which transcend Lebanon and fall in line with the alliance of minorities’ debate which calls for a front of non-Muslim factions to oppose the political hegemony of Sunni Islam.

From this perspective, Le Pen’s meeting with Michel Aoun could be read as an implicit declaration of an alliance between the chief of the resurgent French Christian Right and the powerful and legitimate representatives of the Levantine Christians, which - if Aoun's previous statements are any measure - would include other heterodox Muslim elements such as the Alawites of Syria.

Aoun has insisted that Syrian President Bashar al-Assad stays in office, while Le Pen has repeatedly called for engaging with him. And Le Pen has also previously suggested that France break off its relations with Saudi Arabia and ally with Iran, while Aoun is a staunch supporter of the Iranian-backed Hezbollah.

Along with Le Pen, leaders of this new populist front which extend all the way to Moscow and Washington, accuse Saudi Arabia and other Gulf countries of being the main sponsors of terrorism and extremist movements.

This populist rhetoric, which Le Pen and many of her local Lebanese supporters share, might seem to many as a legitimate manoeuvre to win more votes, be it in the French presidential elections or the Lebanese parliamentary elections coming up this summer.

However, ultimately, these populist gestures, regardless of their intentions, are a clear message to Muslims in the region and especially Lebanon, that all forms of Sunni Islam are essentially unacceptable in the eyes of the Christians or their so-called legitimate leaders.

More importantly, anyone who truly intends to combat terrorism and counter-extremism has to be fully aware that the success of their endeavour rests on finding moderate and cooperative elements within the same environment these terrorists operate in.

Therefore, appearing to brand Sunni Muslims in Lebanon or the Levant as terrorists is categorically counterproductive for a dwindling Christian population still dwelling on past glories.

More so, to side with Assad who has indiscriminately killed his own people regardless of their sectarian or racial identity, or to receive a highly detested figure such as Le Pen, is certainly not a solid investment for the Christians of the Levant nor for anyone who intends to regain the patronage and the support of the West.

Ultimately, any Lebanese dual national who wishes to vote for Le Pen or any of her fellow travellers should remember that once she is in office, there is nothing to stop her from honouring her election pledges which include the removal of citizenship from dual nationals.

If such a scenario does occur, those who have been cheering for Le Pen’s visit to Lebanon will not only lose their passports, but they will also be left alone in a hostile Sunni environment which has no reason, nor will to continue to be cordial and neighbourly.

Photo: France's far-right National Front presidential candidate Marine Le Pen holds a presser at the government palace after a meeting with the Lebanese prime minister on 20 February 2017 in Beirut (AFP)