CJ Werleman
With a president who gives life to conspiratorial thinking and tacit approval to political violence, it’s little wonder that we end up with people such as Cesar Sayoc Junior and Robert Bowers 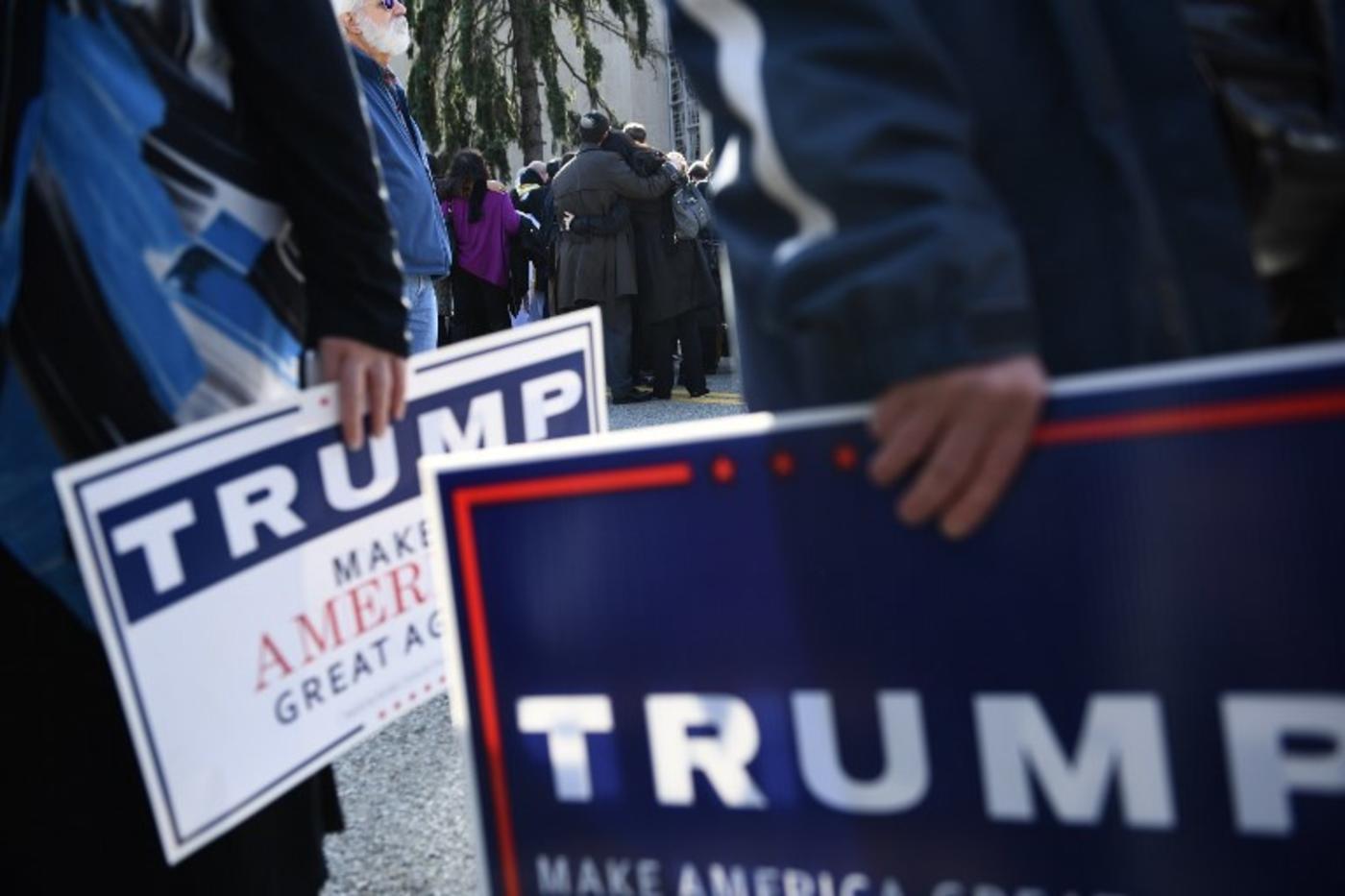 Just moments before slaughtering 11 Jewish worshippers at the Tree of Life synagogue in Pittsburgh, Robert Bowers posted on an alt-right social media platform about the need to stop “evil” Jews from bringing “evil” Muslims into the US.

He had latched onto a conspiracy circulated by US President Donald Trump, who posted a tweet on 22 October falsely claiming that “criminals and unknown Middle Easterners” were seeking to enter the US in a migrant caravan.

In the days following Trump’s xenophobic fear-mongering, the conspiracy-driven corner of the right-wing blogosphere - today almost indistinguishable from mainstream political discourse on the right - went to work to put an anti-Semitic flavour on Trump’s tweet. False rumours about Jewish philanthropist George Soros funding the migrant caravan circulated on sites popular among Trump’s supporters.

Soon, Trump’s conspiracy theory - debunked by the US Department of Homeland Security - was playing as though it were manna from Heaven on Fox News, NRATV, and the social media accounts of high-profile conservative pundits and politicians.

Just days after Trump warned of “criminals” and “Middle Easterners” approaching the southern US border, Bowers expressed alarm at the sight of “massive human caravans of young men from Honduras and El Salvador invading America thru our unsecured southern border”. He attacked HIAS, a Jewish refugee agency that has helped Muslim refugees resettle in the US, posting: “HIAS likes to bring invaders in that kill our people. I can’t sit by and watch my people get slaughtered. Screw your optics, I’m going in.”

Both his van and Twitter feed provide insight into the media ecosystem, or rather unhinged echo chamber, that many of Trump’s most ardent supporters inhabit

Days earlier, Cesar Sayoc Junior, a 56-year-old Florida man, was taken into custody and charged with five counts, including illegal mailing of explosives and threats against former presidents. His targets included current Democratic Party leaders, CNN, and a number of vocal critics of Trump.

A casual gleaning of Sayoc’s social media accounts, along with images of his sticker-plastered van, reveal the sum total of every counterterrorism practitioner’s greatest fears: an individual radicalised by crazy right-wing conspiracy theories and social media memes.

His Facebook account reads almost as a shrine to the US president, with a litany of pro-Trump content, including videos and pictures purportedly filmed at one of the president’s political rallies. But both his van and Twitter feed provide insight into the media ecosystem, or rather unhinged echo chamber, that many of Trump’s most ardent supporters inhabit.

His Twitter feed thrusts forward one loony, far-right conspiracy after another, including theories that Soros is a secret funder of “crisis actors”, meant to exaggerate mass shooting body counts in order to pressure lawmakers into passing new gun-control laws, and other baseless conspiracies, such as “Pizzagate”, “chemtrails” and “birtherism”.

These conspiracy theories and others are not only injected into the US political body by far-right bloggers - such as Alex Jones, who claimed that the 2012 Sandy Hook elementary school shooting was a “false flag” operation carried out by Democrats - but also by the sitting president.

In 2011, Trump carried the flag for a far-right conspiracy theory that smeared former President Barack Obama as a foreign-born Muslim. Since taking office, Trump has pushed conspiracy theories found only in the chat rooms of the most crazed far-right extremists, including the phoney claim that millions of illegal immigrants voted in the 2016 election - meant to explain why he lost the popular vote to Hillary Clinton by three million ballots.

Other theories included that the “deep state” secretly implanted a political spy into his 2016 campaign; that the father of his 2016 Republican Party primary opponent, Ted Cruz, killed JFK; that Obama wiretapped Trump Tower; that the Clintons were involved in the murder of a former aide, Vince Foster; that conservative Supreme Court Justice Antonin Scalia was killed by a left-wing plot; that Muslims in New Jersey cheered for the 9/11 attacks, and more.

When Trump isn’t espousing these absurdities, he’s espousing violence against his political opponents and critics. He has threatened that “Second Amendment people” (gun advocates) could step in if Clinton won the 2016 election; called journalists the “enemy of the American people”; praised a congressman who assaulted a reporter; and warned of “violence” if Republicans lose the midterm elections.

So, what relationship is there between conspiracy theories and radicalisation to violent extremism? In other words, when did Sayoc move from getting around in a van covered in anti-Democrat, anti-CNN and anti-liberal stickers, to opting to carry out acts of violence against these same targets?

The stronger one’s ties are to an established ingroup, the more likely the individual will attach conspiratorial intentions to a 'threatening' outgroup

“We’ll have to wait and see what investigators hear when they interview him,” Amarnath Amarasingam, an internationally renowned terrorism analyst, wrote in a Twitter thread. “When it comes to conspiracies and violence, studies talk about an individual’s ties to his or her in-group. In other words, the stronger one’s ties are to an established ingroup, the more likely the individual will attach conspiratorial intentions to a ‘threatening’ outgroup.”

Jamie Bartlett, co-author of The Power of Unreason: Conspiracy Theories, Extremism, and Counter-Terrorism, observes that “while it is not possible to demonstrate direct causal links between conspiracy theories and extremism, our findings suggest that the acceptance of conspiracy theories in contexts of extremism often serves as ‘radicalising multiplier’”. And Jonathon Morgan, whose company tracks online disinformation, told CNN that social media platforms such as Twitter serve as “radicalisation machines”.

What we see in Sayoc is what we also see in a great many Islamic State recruits: a social failure who not only found validation in extremist rhetoric, but was also able to channel his grievances through the language of in-group, out-group extremism. This occurred in a country where extremist political views have become normalised, a point made self-evident by polling data that shows Americans to be more politically polarised today than at any time since the Civil War.

When you add to this a culture that lionises violence, a nation that finds itself in a permanent state of war, and a president who gives life to conspiratorial thinking and tacit approval to political violence, it’s little wonder that we end up with people such as Cesar Sayoc Junior and Robert Bowers.

Photo: People hold signs outside the Tree of Life synagogue in Pittsburgh, Pennsylvania, on 30 October 2018 (AFP) 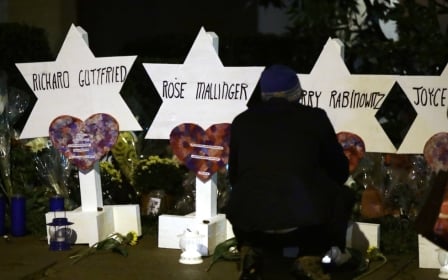