Proxies and peace making in Libya

Jason Pack
As Libya's militias temporarily align to attract money as regional proxies, UN-led mediation could be fruitful, but only if the conflict is viewed through a Libyan lens 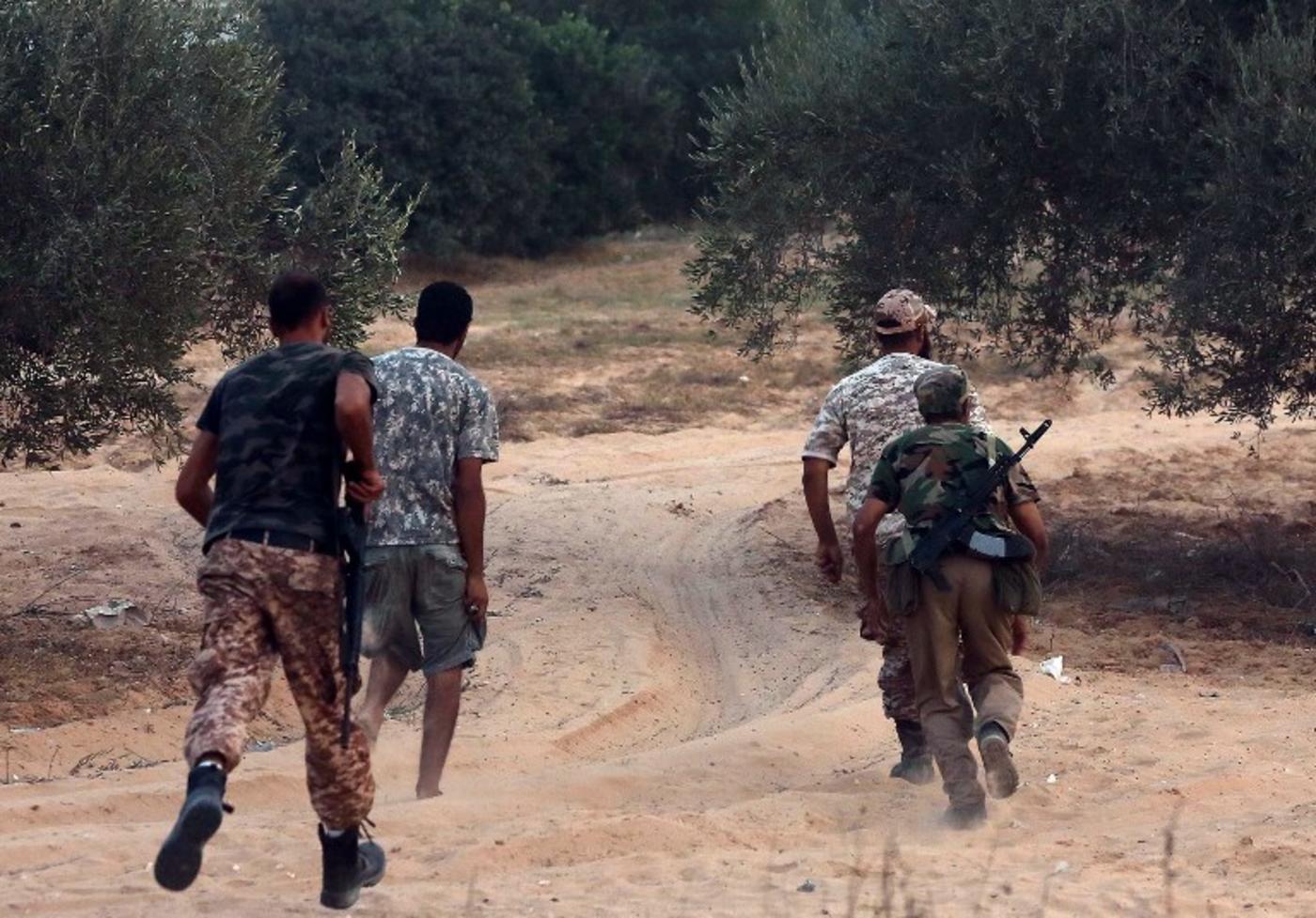 Libya has been on the verge of collapse for months. The country is currently cleaved into myriad semi-autonomous city-states where local councils, tribal leaders, and militia commanders hold sway with little reference to the rival governments in Tobruk and Tripoli. This week the elected authorities in Tubrok fully lost control of the Central Bank to the unelected Islamist and Misrata-dominated Tripoli government who used the funds to pay back salaries as well as buy support. This development reveals who the de facto power holders in Libya really are.

Miraculously, despite this scramble for control of Libya's key institutions, oil exports continue to increase. This trend is not sustainable. The Federalist warlord Ibrahim Jadhran could bring Libya's oil recovery screeching to a halt as soon as he feels that Libya's oil money is being used to strengthen his Islamist allies. To avert this showdown a compromise between Tubrok and Tripoli is urgently needed. Fortunately, recent diplomatic shifts reveal a way forward.

In an attempt to belatedly heal the rifts that beset the country, a flurry of international talks are underway. The 17 September Madrid Conference or the 29 September Ghadames talks were not between the country’s powerful militia commanders who are actually contesting the country’s territory, but only between parliamentarians that accepted and those who are boycotting the Tobruk-based House of Representatives (HoR).

Although the UN Special Envoy to Libya Bernardino Leon hailed the Ghadames talks as 'positive' and promised that future rounds would incorporate more elements, the meeting was condemned by Operation Dawn, the coalition of Islamist and Misratan militias that currently control Tripoli. In response, the UN announced on 2 October that it plans to use sanctions to drive recalcitrant factions to the negotiating table. Cordial invitations and public Western support for the new Algerian initiative for bringing together all the stakeholders at the end of October might be more likely to work, however.

Only a successful mediation attempt will keep the oil recovery underway; if either of the sides believe that they will not have their interests protected by politely awaiting mediation, they will be incentivised to act quickly and seize control of Libya's key assets. Therefore, if the international community doesn't want Islamist militias associated with Tripoli to raid the Central Bank or Federalist militias associated with Tubroq to blockade the terminals, credible proposals for safeguarding these groups interests must be put forth swiftly.

The stubborn international approach of dealing only with internationally-recognised elected bodies is fraught with peril and is wildly out of touch with the reality on the ground. In Libya, such an approach is more likely to exacerbate conflict than to ameliorate it, as it sends the message to powerful non-elected stakeholders like Operation Dawn that their interests will not be secured via negotiations which will inherently favou the weak elected bodies.

Furthermore, Operation Dawn and other groups are not monolithic entities. Ghadames could be a useful first step at dissociating Libya Dawn supporters who favour negotiations from their more hard-line allies. Yet to build on this, inclusive negotiations emphasising shared objectives and including regional partners are required to encouraging compromise between moderate actors on all sides.

The international community's black and white approach to Libya is also symptomatic of the current regional quagmire. But there are signs that the geopolitical stars could re-align allowing for a more pragmatic approach.

Let us first review the state of play over the last three months: Western concerns about the MENA region becoming an incubator for instability, insecurity and extremism have led to Libya's conflict being framed in binary terms, between dangerous Islamists on one side and ‘Liberals’ on the other. As a result, the French are massing troops in Northern Niger hoping to interdict the flow of arms. They are allegedly already helping Zintan's anti-Islamist militias regroup and hunting in the Libyan desert to apprehend wanted terrorists.

The counter-terror optic is promoted by developments in Syria and Iraq. Mirroring developments there, Libya's conflict has become an arena for proxy-war. Conservative Arab autocrats such as the United Arab Emirates and Egypt tussle for regional dominance with countries like Qatar and Turkey, who have put all their chips behind Libya Dawn and are likely financing Tripoli’s pseudo-government and rival parliament. This external backing has had a polarising effect on the domestic environment, acting as a magnet which has forced tribal, regional and ethnic affiliations to realign with the international community's Islamist vs. anti-Islamist conception of the conflict.

Qatar is the most prolific external actor in Libya. During the revolution they provided weapons, logistical support, intelligence and financial resources. SInce then they funnel funds, arms, and media coverage to groups aligned with the Muslim Brotherhood and international Salafism.

Egypt is forefront among the supporters of the anti-Islamist bloc. It wants to eliminate the threat of a hostile Islamist regime being established at its border, while simultaneously denying the Brotherhood sanctuary and funding in Libya. On 1 October, Egypt offered to train the military forces which support the HoR and the anti-Islamist bloc.

Egypt has also formed a coalition with the autocratic UAE who view the rise of Qatari-funded Islamist movements throughout the region as a threat to the regional status quo. The UAE, operating out of airbases in Egypt, is reportedly responsible for a number of airstrikes against Operation Dawn positions over the past month. While denying Emirati involvement in the attacks, HoR-appointed prime minister Abdullah al-Thinni recently visited the UAE to discuss 'strengthening bilateral relations'.

As the situation deteriorates with massive suicide bombing operations rocking Benghazi, Libya is increasingly becoming a vacuum for foreign meddling, encouraging the calcification of the country's many factions into two loose and unnatural blocs as they attempt to align themselves with outside paymasters. In reality, the current struggle between the anti-Islamist and Islamist umbrella groupings for control of Tripolitania and Benghazi is nested inside a web of ongoing local conflicts. Many of the main actors (the federalists, Zintan, Haftar, Misrata, Ansar Sharia) are simply franchised players who could step away from these political blocs to go it alone at any time. Attempts to present the conflict in Libya as a polarised Clauzewitzian war between two sides distorts the reality.

The biggest failure of Haftar and his Emirati and Egyptian backers is their inability to adopt an appropriate strategic narrative. Misrata’s militias are in an alliance of convenience with a range of Islamist factions, yet that alliance does not ipso facto turn their opportunist militias into jihadists.

By aligning with the West, the anti-Islamist camp appears to have fallen into the same trap as Western actors, denouncing all their enemies as terrorists. This is a widespread conceptual error which views post-9/11 conflicts in the Muslim World through an imposed international or religious dimension; as two polarised sides fighting each other rather than a web of local conflicts which only loosely overlap with broader national or regional issues. This misconception is elegantly sketched in the Afghan context by Emile Simpson in War From the Ground Up.

UN-led efforts to mediate may yet bear fruit, but only if the conflict is viewed through a Libyan lens, not one forged by Western concerns about the spread of jihadism in the wider MENA region. In Libya, Islamism is only one strand in a multi-layered quilt of regional, tribal, ethnic and ideological cleavages. Each of the strands needs to be disentangled in order to build lasting peace and stability.

Only a sustained Western and regional mediation campaign stands a chance of preserving the momentum of Libya's oil recovery and saving Libya's population from more privation. Simply supporting the anti-Islamists against the Islamists, will incentivize the later to shut off the tap of Libya's oil or raid the coffers of the Central Bank.

Fortunately over the last days, perspectives seem to be changing and momentum is gathering behind a new Algerian initiative for a UN-supported mediation effort that actually brings all the stakeholders together and refuses to see the conflict as a binary struggle between two polarised opponents.

According to Karim Mezran, Senior Fellow at the Atlantic Council, "Qatar is proclaiming left and right that it is not arming the Islamists in Libya, while Sudan recognised the HoR and endorsed the Algerian plan, so did Iran. Egypt and the UAE are seeing that their airpower is not able to tip the balance of the conflict and are hence willing to endorse the Algerian initiative." Belatedly, Western actors are waking up to the fact that the HoR cannot win this conflict and that all stakeholders must be included in a settlement for it to hold.

A new meeting in Spain or Algeria in late October could hold the key to keeping Libya united. Giving political promises to Libya's key stakeholders is essential to incentivising a political rather than a military solution to the impasse. Realities on the ground are shifting rapidly, if we wait for the Central Bank to be looted or Libya's oil ports to be blockaded it will then be too late to roll the clock back.

- Jason Pack is a researcher of Middle Eastern history at Cambridge University, president of Libya-Analysis.com, and lead author of  Libya’s Faustian Bargains: Breaking the Appeasement Cycle - published in May 2014 by the Atlantic Council.

Photo credit: Members of the Shield Brigade fight against gunmen said to be loyal to Muammar Gaddafi in the Wershefana suburb of Tripoli last month (AFP)