Ramzy Baroud
For those who spent childhoods in Gaza, the spiritual month of abstinence provokes reflection on how it enabled Palestinians to uncover the collective strength of their beleaguered community 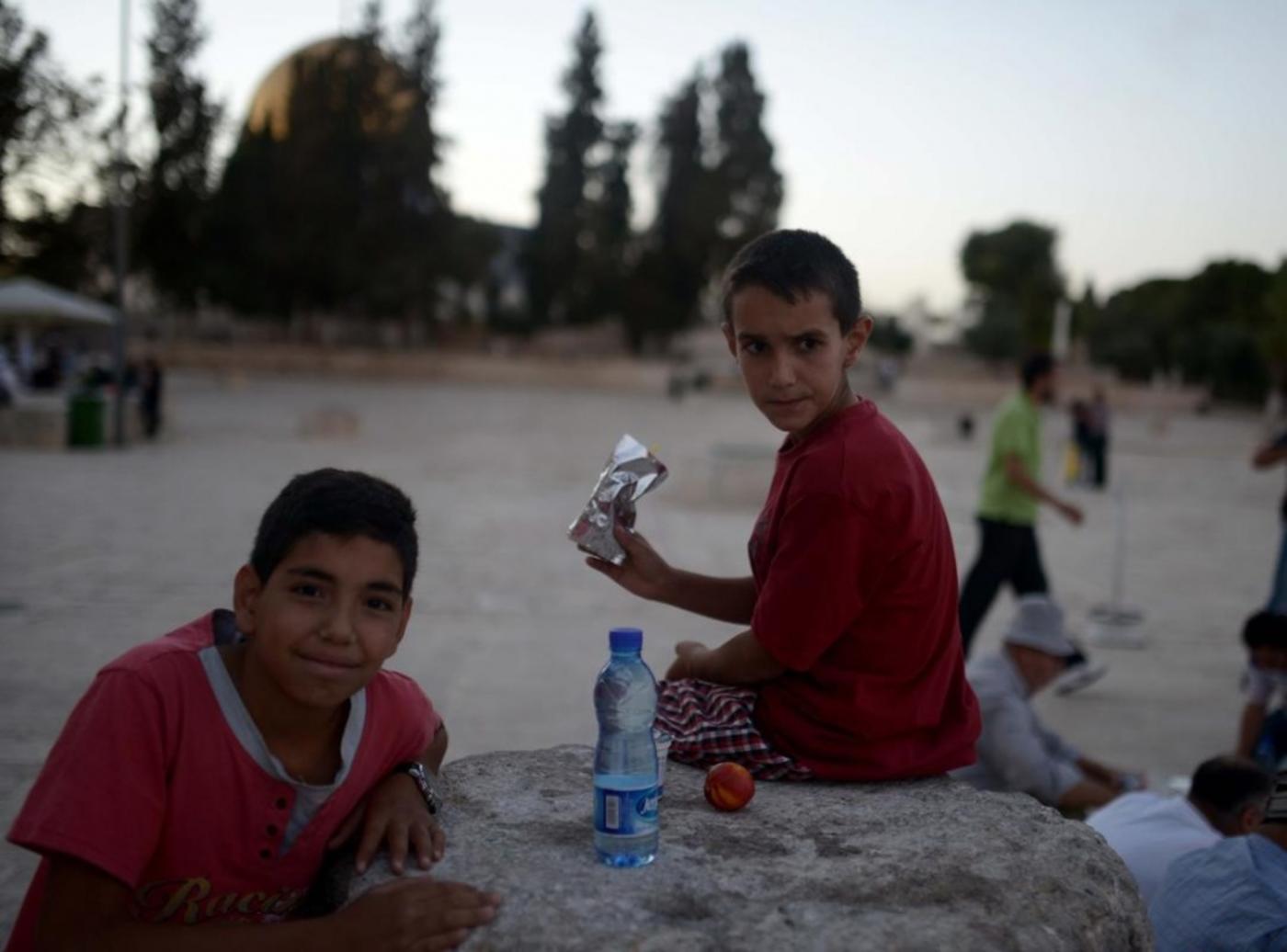 When I was a child, I obsessed with socialism. It was not only because my father was a self-proclaimed socialist who read every book that a good socialist should read, but also because we lived in a refugee camp in Gaza under the harshest of conditions. Tanks roamed the dusty streets and every aspect of our lives was governed by a most intricate Israeli “civil administration” system - a less distressing phrase for describing military occupation.

Socialism was then an escape to a utopian world where people were treated fairly; where children were not shot and killed on a daily basis; where cheap labourers were no longer despairing men fighting for meagre daily wages at some Israeli factory or farm; and where equality was not an abstract notion. But since Gaza had little in terms of “means of production”, our socialism was tailored to accommodate every lacking aspect of our lives. Freedom, justice and ending the occupation was our “revolutionary socialism” around which we teenagers in the camp secretly organised and declared strikes on the walls of the camp in red graffiti, and quoted (or misquoted) Marx as we pleased, often at times out of context.

And when it was time for prayer, we all went to the mosque. We simply didn’t see a contradiction, nor did we subscribe to (or cared to understand) the inherent conflict between socialist movements and institutionalised religion in the West. True, we declared solidarity with factory workers in Chicago and followed the news of union victories in Britain, but our socialism was mostly south-oriented. It was the revolutionary struggles of Guatemala, South Africa and Algeria that inspired our various socialist movements in Gaza and the rest of Palestine. Socialism was a call for freedom first, before it was a call for equitable salaries and improved work conditions.

There was little by way of Western-styled “atheism” in our refugee camp. Most of us prayed five times a day, communists and all.

A socialist and a Muslim

I went to the mosque for prayer as often as I could. I memorised chapters of the Quran at a young age. Starting in the second grade, I joined my peers for classes in Islamic stories taught by a kindly, semi-blind young man named Sheik Azzam. In the stories, those with faith always triumphed in the end. The key to their victories, well, aside from the inevitable divine justice, was their unity and persistence. The characters were often, if not always, poor. The poor always triumphed in Islam, or the way Islam was taught in my refugee camp.

I was a socialist and a Muslim. It was my father, who was sometimes called a “communist” as a slur by some of the camp’s ultra conservatives, who urged me not to miss my prayers, and rewarded me for reading the Quran. He was the same person who shared his treasures of translated Russian and other literature with me, all promising of a revolution, of a better world where a person was not judged based on his or her colour, race, sect, religion or nationality. If there was ever an inherent tension in all of this, I didn’t see it. I still don’t.

Naturally, a real socialist must have a nemesis. In many parts of the world, the archenemy is the multinational corporations and, in the US in particular, the use of military-driven foreign policy as a tool to maintain global hegemony; it is globalisation used as a platform to enforce a new kind of imperialism that is no longer an exclusive western attribute. For me in the refugee camp, my nemesis was our neighbor Ghassan. He owned a car, a beat-up old Fiat that was actively decomposing back into its original elements. The colour was a rainbow of old paint and rusting metal, and its seats were almost entirely bare from any evidence that leather chairs were once attached to the unpleasant iron beneath.

Nonetheless, Ghassan represented a “class” of society that was different than mine. He was a teacher at a United Nations-funded school, who was “getting paid in dollars”, and his likes received what was called a “pension”, a seemingly novel concept that Gaza cheap labourers in Israel didn’t enjoy, needless to say comprehended.

Ghassan also prayed at the same mosque as I did. On the main Friday prayer, he wore a white jalabiya (robe) of white silk, manufactured abroad. He wore authentic Egyptian cologne, and along with his UNRWA colleagues, walked to the mosque with the unabashed grandeur of a feudalist.

In the month of Ramadan, as poor refugee parents struggled to make at least the first few days of the fasting month somewhat special and festive for their children, Ghassan and his clique prepared feasts, shopped for the best vegetables, and adorned their iftar tables with meat, not once a week, but every single day of the entire month. And here is the part that I resented the most: to show gratefulness for how “lucky” and “blessed” they were, the rich refugees would distribute raw meat in carefully sealed bags to the less fortunate since Ramadan is the month of charity. And of course, the most qualified to give charity was a UN teacher paid in dollars and expecting a so-called pension.

Today I chuckle at the naïve notions of that Gazan child. In actuality, Ghassan was slightly less poor than the rest of us. His home was an improved version of the UN’s “temporary shelters” it provided refugees following the Palestinian exile in 1948. He was paid around $US400 a month, and his car eventually broke down and was sold to a neighbouring mechanic for scrap metal.

Much of this was placed in context later in life when I worked in a rich Arab Gulf country. I spent two Ramadans there. Each year our company provided a “Ramadan tent”, not a metaphorical term, but an actual massive tent under which the finest of delicacies, cooked by the best of chefs, was served by cheap labourers who although included fasting Muslims, were not allowed to break their fast until the rest of us did. The fasting men and women thanked God for giving them the strength to fast before they diligently consumed massive amounts of good food until they could hardly move. Some Muslim men would make it a mission of theirs to explain to our western, mostly female, guests the importance of Ramadan to cleansing the soul as Muslims give charity and feel the pain of the needy. Poor, often skinny, Bangladeshi workers would anxiously be running around filling trays as they quickly became empty, and apologised profusely for why one of the 20 types of meat offered was not tender or spicy enough.

Ramadan always takes me back to the refugee camp in Gaza, no matter where I am in the world. And when a TV sheikh preaches about what Ramadan is or is not about, I often reflect on what Ramadan has meant to me and my peers in the refugee camp. It was not about feeling the brunt of the poor, for we all were, Ghassan included, poverty-stricken. It was about sharing the hardships of life, a communal struggle against one’s own weaknesses and a month-long introspection to uncover the collective strength of a beleaguered community. Ramadan was an exacting platform through which poverty and deprivation were devalued so that when Ramadan was over, we felt grateful for the little we had, before we resumed our struggle for the rights and freedoms we truly deserved.

- Ramzy Baroud is a PhD scholar in People’s History at the University of Exeter. He is a consultant at Middle East Eye. Baroud is an internationally-syndicated columnist, a media consultant, an author and the founder of PalestineChronicle.com. His latest book is My Father Was a Freedom Fighter: Gaza’s Untold Story (Pluto Press, London).

Photo credit: Palestinian Muslims break their fast at the yard of the Al-Aqsa Mosque, in the Old City of Jerusalem, June 29, 2014 (AA)