The ‘Republican March’: A nationalist rally with sinister undertones 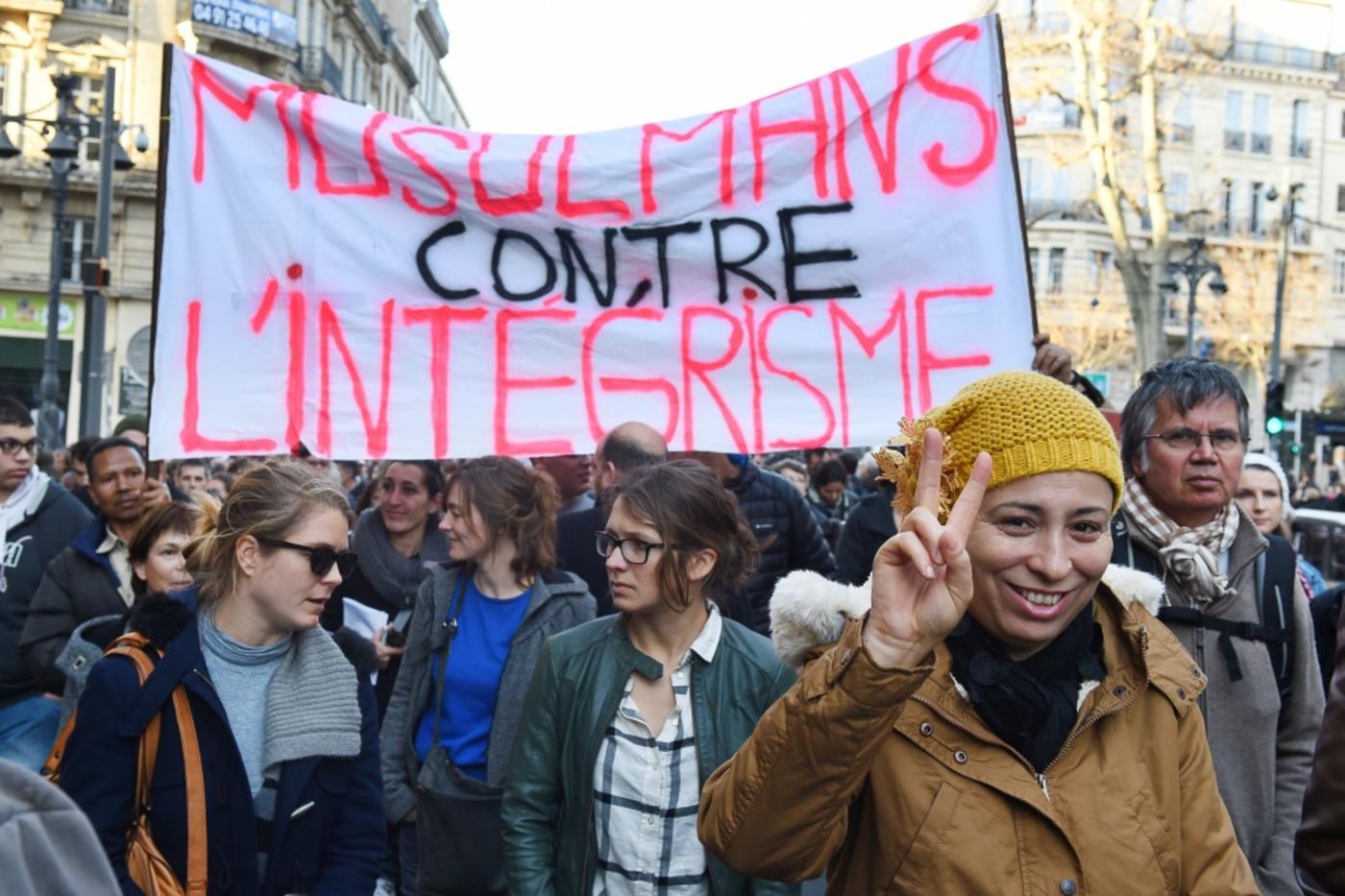 The concept of national unity is an appealing one to our politicians - let us rally around a visionary leader - and in the case of Francois Hollande, around one of the most unpopular presidents in French history at a time of huge national division over everything from economic policy to gay marriage.

In his speech during the “Republican march” on Sunday 11 January, Hollande stated: “Clarissa, Frank, Ahmed  - died so we could live free,” in reference to the three police officers gunned down in the Charlie Hebdo attack.

The image of diversity - black, white, Arab - united under the republic encapsulates the French ideal, all differences subsumed under the national banner, erased in the unity of principles and values. Ahmed, the Muslim police officer, Hollande told the crowds, died defending the principle of laïcité, a central principle of the French Republic and an incarnation of which has been used to advance ever more restrictions against Muslims in contemporary France.

Moments of real national unity are incredibly rare and in many cases, quite sinister. Because despite the rhetoric, national unity can provide a glorified cover to the stifling of differences of opinion and the opportunity to impose a singular narrative, the nationalist narrative of “who we are” which can only be contested at the risk of being expelled from the national body and in so doing, of becoming the suspect “other”. Sunday’s march gathered people for various reasons - among them to remember the dead, to oppose terrorism and to support freedom of expression.

Vigils to remember the dead are typically solemn affairs - the strength of emotion is consistently aimed at those who lost their lives in tragic circumstances. Vigils aren’t about us, they’re about them. And that’s why, watching the largest ever public rally in French history, it was clear to me that this was no vigil. This wasn’t so much about “them”, the victims of political violence, but about “us” and about what we, the French stand for.

What we stand for, we were told, was opposing terrorism. But this begs the question of who exactly supports it? Or perhaps more to the point, who is perceived as supporting it? After all, protests are generally the purview of a minority which feels its voice isn’t being heard, of the besieged who must take a stand against the status quo. But when the protest becomes the status quo, surely the question shifts to whom exactly is being targeted by the message.

Some may claim the banners were directed at the terrorists - presumably not the dead ones - but the international networks to which they claimed allegiance. Are terrorists thought to be responsive to public protests? Or perhaps the message targeted elsewhere. If the target wasn’t the terrorists, is it the perception of an enemy much closer to home - the implied enemy within?

Many juxtaposed “opposing terrorism” with “supporting free speech” - but with Charlie Hebdo taken to symbolise free speech in the context of the march, this particular publication, which deliberately produced incendiary and at times racist images targeting Muslims, has come not only to define free speech in France, but it has been incorporated through this march into the definition of national values.

In becoming the heroic voice of French freedom of expression, its previously contested maligning of Muslims and minorities has been reimagined as the quintessential expression of French identity.

To realise just how problematic this is, it is worth considering that this alleged beacon of anti-racism was publishing demonising images of Muslims in a country in which, just last month, a popular TV presenter was sacked for saying Muslims “should be deported to prevent civil war”; where France’s best-loved novelist Michel Houlebecq’s most recent bestseller was described by one journalist as “when the ideas of the far-right made a grand return to serious French literature".

For a leftwing magazine, it seemed oddly blind to the struggle of the Muslim working classes, siding with a near societal consensus that their presence represents an inherent problem within European societies. In a 2013 poll, 74 percent of the French admitted they perceive Islam as incompatible with French society.

Recast in this sense, a nationalist rally of this magnitude which has as one of its central themes a perception of free speech embodied by a magazine which sought to denigrate an already much maligned minority within a broader climate of hostility and discrimination should perhaps raise some concerns. To speak of national unity at a time when France has rarely been so divided could only occur in the face of a perceived, existential external enemy - a common threat behind which all citizens must unite.

Ethnic minorities and Muslims in particular experience acute levels of discrimination at every level, from education, to housing, to employment. In France, a Christian citizen is two-and-a-half times more likely to get called for a job interview than an equally qualified Muslim candidate. Verbal and physical abuse of Muslims was up 47 percent last year.

This march was in fact part of the construction of the national self in contrast to the demonised Muslim “other”, expanded from the ahistorical, evil terrorist, to the broader Muslim threat, of which the terrorists are the mere violent tip of the proverbial iceberg. So much so that Muslims present at the march often felt the need to clarify their position within this potentially exclusionary lens - holding up placards to protest their innocence and respond to the presumption of guilt which assumed from their Muslim-ness a potential sympathy for murder.

This is the same republic which was constructed historically against the colonies from whence many young Muslims originate and which continues to this day, to largely exclude them not only from centres of power, but also from the sort of social mobility which might provide a stake in the constantly evolving national identity. Historically, the republic’s civility was built off the back of the presumed barbarism of its colonies, its sense of self constructed in opposition to the “unenlightened” Muslims which France conceived of as its civilising burden.

This so-called anti-establishment magazine which provided the pictorial illustrations of some of the bilious representations of Muslims, has since had its funding guaranteed by the French state, simultaneously undermining its journalistic independence, anarchic credentials and stamping its discriminatory output with a state certification.

I have previously argued that the targeting of Charlie Hebdo seems to have been a strategic decision by al-Qaeda, because it was known for selecting symbolically significant targets, in this case, which had previously polarised French society. Targeting Charlie Hebdo would allow them to appear to be acting in the name of all aggrieved Muslims, despite the fact even those troubled by the images have been vocal in their condemnation of the use of violence as a response. Sadly, the perception that they were indeed acting on behalf of broader sentiment appears to be prevalent.

In the wake of the attack, former prime minister Alain Juppe, while affirming the right of Muslims to live in security, called on Muslims to “assume their responsibilities” by affirming the values of the republic, while also calling on them to advocate gender equality. Unless you assume the attack was in any way connected to the broader Muslim community - and to a perceived conflict between republican and Muslims values, the call appears somewhat misplaced. I’m going to suggest it is misplaced either way.

French author Yann Moix went on, declaring that from hence forth “we will only call Muslim those who marched with us,” suggesting the republican march served a broader political ideal of not only narrowing the space for dissent, - ironically - but it also cemented a sense of Muslims as suspect citizens whose allegiance was to be proven, not accepted as given. Evidence of this new climate was immediate, as Rokhaya Diallo, a French Muslim broadcaster was reduced to tears on live radio, as a prominent writer badgered her to distance herself from the actions of the terrorists, a call she felt placed her and all Muslims on “the bench of the accused”.

Even if the objective of this horrific attack had been freedom of speech, the global response which has included widespread reprinting of the images in question, as well as the continued publication of Charlie Hebdo, suggests free speech has thankfully not been dented by the terrorists. It is, however, under threat from the immediate passing of ever more intrusive surveillance laws, the state of exceptionalism serving to justify ever more restrictions even before the banners extolling freedom of expression have been put away, and the massive police and military presence which only presages greater freedom for those who haven’t consistently been the victims of their abuses.

The republican march meant many things to many different people. But it has unquestionably been instrumentalised to further a sense of the republic inherently at odds with Islam and as requiring of its Muslim citizens to caveat their presence within it.

Sunday’s rally was a reminder that there is nothing quite so unifying in French politics as anti-Muslim prejudice. Human Rights
You want to know what Britishness is all about? Just ask a Muslim
Moazzam Begg