Mohamed Eljarh
Why has Haftar gone on the offensive and does he have enough political capital to pull off the coup? 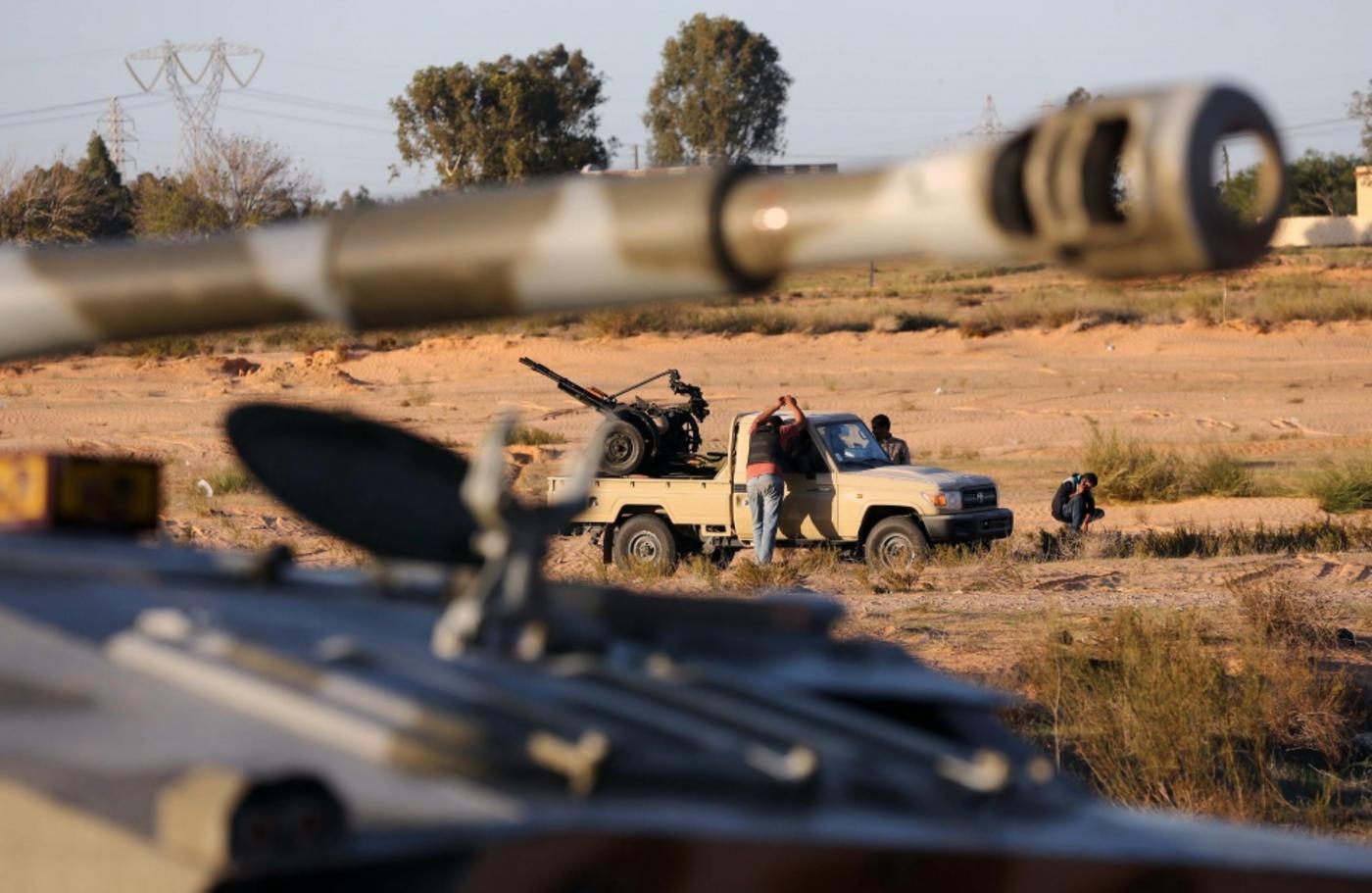 Post-revolution Libya is witnessing the most turbulent episode of its transition after clashes erupted in Benghazi on Friday last week, leaving more than 50 dead and many more injured.

The clashes erupted when forces led by retired Army General Khalifa Haftar led a surprise offensive against Islamist militias in the city. He claims that many of these militias which are strong in some cities like Derna, Sirte and Benghazi are gaining in influence over Libya’s democratically elected institutions, and that these militias were threatening Libya’s way of life and must be “purged.”

Following the clashes in Benghazi, the capital Tripoli witnessed what seemed like a coup attempt when the parliament building came under attack by armed groups. Offices were set alight during the assault and members were forced to escape and left fearing for their lives.

Shortly after the attack on parliament, it became apparent that forces loyal to Haftar were also behind the second attack.

This was made public when the head of Military Police in Western Libya, Colonel Mokhtar Fernanah, who also hails from the powerful town of Zintan in western Libya appeared on TV. In his statement, he announced the suspension of the Libyan Parliament and delegated its legislative powers to the recently elected Constituent Assembly – the body in charge of drafting the country’s constitution.

Fernanah, also affirmed his support for “Operation Dignity” led by Haftar against what he called “terrorist groups” that have hijacked post-revolution Libya.

Events are still unfolding on the ground, and it remains uncertain which faction will eventually gain the upper hand, although the run up to the latest offensive led by Haftar and his approach to the situation offer vital insight into how things may play out.

The build-up to Operation Dignity

“Operation Dignity” has roots in two years of exclusionary politics, polarisation and struggle for power that has characterised the General National Congress (GNC) rule since 7 July 2012.

After 42 years of dictatorship and a brutal eight-month revolution Libya was in dire need of inclusive politics, based on consensus and focused on the people’s aspirations and national interests.

When Libyans elected the GNC in July 2012, they hoped that it would bring about the positive change but these aspirations for reconciliation and reform were quickly dashed.

The GNC proved too divisive and was too polarised. It appeased militias and failed to provide security. Many also accused it of placating Islamists. It furthermore alienated key figures and passed a controversial political isolation law that banned the likes of Mahmoud Jibril, Mustafa Abduljalil and other instrumental leaders of the 17 February revolution, including Haftar, from politics.

By February 2014, many Libyans had had enough and marched the streets to demand the GNC end its mandate on 7 February this year, the date set for the country’s Constitutional Declaration (the country’s transitional road-map).

Once this deadline was missed, the GNC’s legitimacy started to erode further.

GNC members claimed that dissolving the GNC this early would create a constitutional and political vacuum in the country and refused to compromise.

Given the GNC’s poor performance and lack of accountability, it became increasingly difficult to defend the body’s legitimacy and public disgruntlement grew.

The erosion of GNC’s legitimacy in turn prompted GNC rivals, such as the federalists, Haftar and other tribal forces like Zintan, to try and take advantage of the situation.

On 14 February, Haftar went on television to announce the suspension of parliament, and declared a new "road map" for the future.

Haftar, a former Gaddafi loyalist who fell out with the regime in the 1980s, played a key role in the 2011 uprising. Despite being made officially redundant by Libya’s GNC, he continued to command the loyalty of some factions within Libya’s armed forces which likewise resented the rise of extremism and the neglect of the national armed forces, which they felt were being cast aside in favour regional and Islamist militias.

Haftar's announcement was thus able to quickly win the support of some army officers in eastern Libya and the QaaQaa and Saweq militias in Tripoli. These two militias hail from Zintan and are considered the counter-weight to Islamist militias in the capital.

The authorities, however, laughed off the potential coup attempt, with one official calling it "ridiculous."

When is a coup not a coup?

Haftar was quick to stress that his announcement was not a coup attempt, stating that a coup would require a coherent government to overthrow in the first place. But while his February attempt fell short, the 64-year-old seems to have used the time since his original takeover announcement to launch something of a charm offensive.

Despite having an arrest warrant against him, in place since 14 February, Haftar continued to operate and move freely in eastern Libya. He has been spotted joining his supporters in Benghazi demonstrations, urging action against the extremist and Islamist groups that, he says, have hijacked Libya.

His campaign focused on eastern Libya to rally support from tribal forces and Libyan Army officers. Given the neglect that many in the army feel they have suffered at the hands of the current authorities, they were quick to find affinity with Haftar.

They appear to see him as a champion to their cause in the face of a vicious assassination campaign by militias, which enjoy support from certain political groups in the Libyan parliament and government.

Haftar’s PR offensive and his military background seem to have paid off in recent days. So far, Haftar’s core support stems from old army units that existed under Gaddafi, but were quick to defect when the 17 February revolution started in 2011. In addition, Haftar has the support from tribal forces such as the federalists in Eastern Libya as well as the Zintan and Wershafana in Western Libya. Even Misrata’s forces and leaders are taking a neutral position towards the events instead of supporting GNC as we were saw previously. This gives a hint that GNC is in a more difficult position today than it was yesterday. While they have now announced that new parliamentary elections will take place on 25 June, a step that is aimed at calming tensions, it is unlikely to change facts on the ground.

But the battle is far from won. The native of Ejdabyia in eastern Libya is up against powerful Islamist militias that also have revolutionary legitimacy because of their participation in the war against Gaddafi. Furthermore, these militias are also recognised and sanctioned by the current Libyan authorities, which Haftar claims have been infiltrated by extremist elements.

A long road left to climb

In the end, Haftar’s success will be determined by how well he manages the first stage of his campaign and whether or not he maintains a united front among all his supporters.

His campaign is currently helped by the panic-driven, confused and somewhat divided response from the authorities in Tripoli.

With that in mind, the State Department has refused to describe Haftar’s actions as a coup on the democratically elected authority in Tripoli, and refused to confirm or deny any contact with Haftar following the start of his campaign.

Whatever the reality may be, the idea of foreign support for Haftar’s campaign is already on many people’s minds. Haftar’s opponents in Libya are already claiming that the Egyptian army is providing him with actual on-the-ground support, although there is no evidence to support such claims.

But Haftar still has a big card to play. He understands that regional powers are concerned about the rise of extremism and the ability of extremists to use Libya as a hub for regional activities. This may yet allow Haftar to gain international support from places such as Egypt and Algeria.

On the other hand, the United States will very likely welcome an organised Libyan campaign that vows to take on groups such as Ansar al-Sharia, designated terrorist organization by the US. This could explain the somewhat cautious response by the State Department to the developments in Libya.

The current developments in Libya undoubtedly represent the greatest threat thus far to Libya’s democratic transition and the unity of the country as a whole. But with everything still left to play for and no clear winner emerging so far, Haftar would be wise not to overreach and create further divisions with the so-called terrorists. A full scale war will do little to help get Libya back onto the path of democracy and true transition.

- Mohamed Eljarh is a Libyan academic researcher and activist. He is also the Libya Transition blogger for Foreign Policy Magazine.