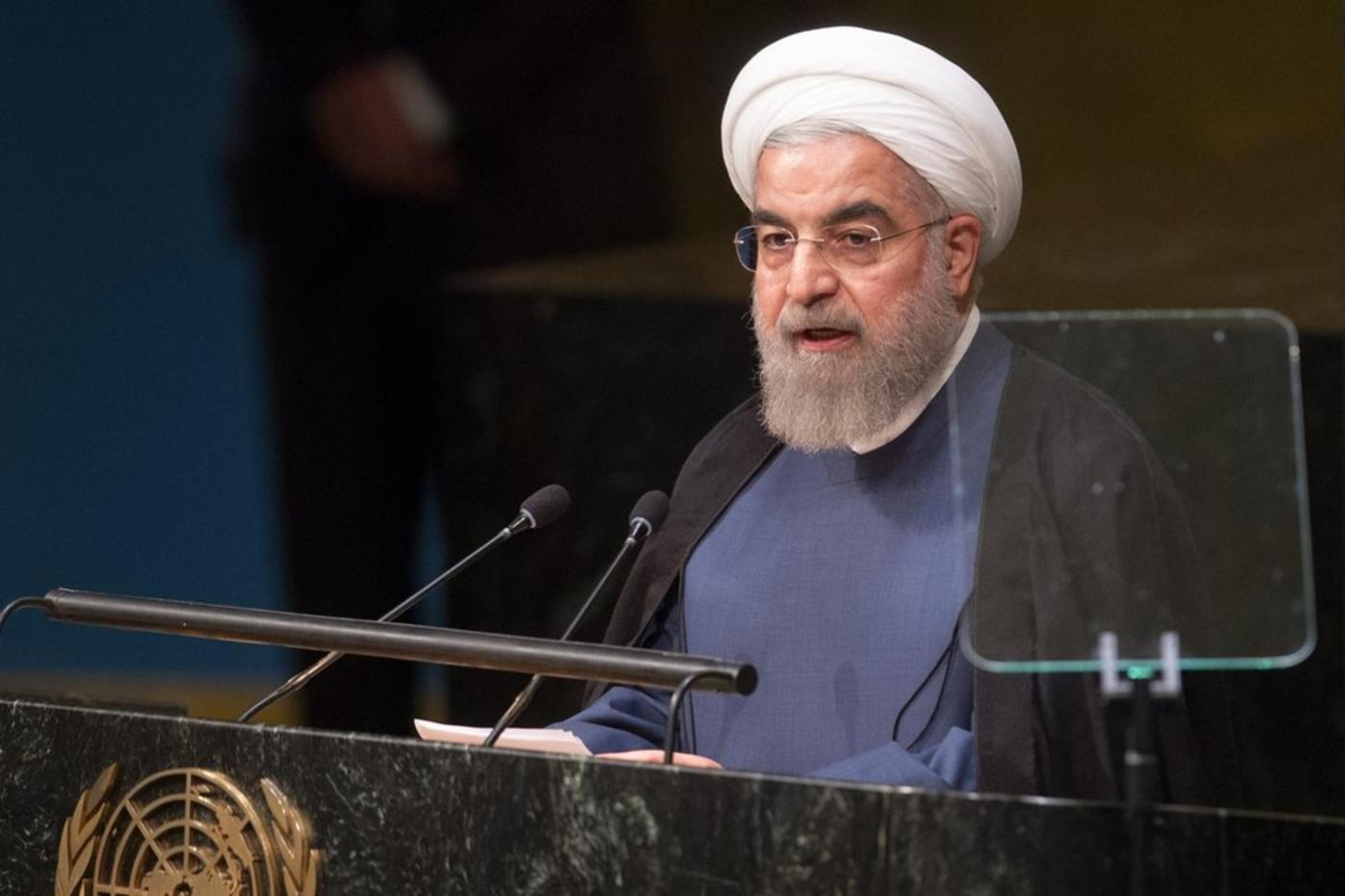 Iranian President Hassan Rouhani’s address at the UN General Assembly and a talk the previous night to about 150 Americans touted the recent nuclear breakthrough as a precedent for further diplomatic accommodation with the United States. But both speeches also called on Washington to change its policy toward the conflicts in the Middle East.

Despite notable differences between the two presentations, the thrust of Rouhani’s argument was that Iran is ready to apply the style of diplomacy that brought about the nuclear breakthrough to conflicts in the Middle East, but that it could not accept a US policy that puts the survival of the Syrian state at risk.

In the UN speech Rouhani called the Joint Comprehensive Plan of Action (the official name for the nuclear deal) an historic “victory over war” but had harsh words for US support for the destabilising policies of its allies in the region. In the talk to the American audience, which this writer attended, he was more precise on both scores. He offered to apply the model of “win-win” negotiations to a peaceful settlement of the war in Yemen that would involve all Yemeni parties to the conflict. He vowed, “We are willing to help with actionable measures to maintain everyone’s safety.”

But Rouhani was also very firm in insisting that the United States should agree to common actions to stop the threat of a takeover by “Daesh” (Islamic State group - IS) before discussing the fate of the Assad regime. “The priority” on Syria, he said, “is the duty to collaborate against terrorism,” although he then added that this “doesn’t mean a future form of government in Damascus should not be thought of”.

In the past, Obama administration officials and their think tank advisers have explained Iran’s support for the Syrian war against IS as an indication that Rouhani - and perhaps even Supreme Leader Ali Khamenei as well - have to placate the powerful Islamic Revolutionary Guard Corps by supporting its operations in Syria and Lebanon.

But that politically convenient interpretation ignores the fundamental fact that Iran’s national security strategy has had two primary objectives ever since Khamenei became Iran’s leader: to integrate the Iranian economy into the global system of finance and technology and to deter the threats from the United States and Israel. And Rouhani had primary responsibility for achieving both tasks.

When Akbar Hashemi Rafsanjani succeeded Khamenei as president in 1989, he chose Rouhani to be the secretary of the newly-created Supreme National Security Council (SNSC). Rafsanjani was the leader of the political faction that favoured a more liberal economic policy for Iran and was determined to find a way to end the hostility between Iran and the United States.

It is well known that Khamenei and Rafsanjani have long been political rivals with different visions of Iranian society and economy. What is much less well known is that it was Rafsanjani who nominated Khamenei to succeed Ayatollah Khomeini after Khomeini's death. And after Rafsanjani was elected president in 1989, the two figures agreed that Iran should test Washington’s willingness to enter into a dialogue with Iran.

Rouhani remained in the position of secretary of the SNSC until 2005 – the equivalent of serving as national security adviser for three or four successive US administrations of different parties.  The remarkable continuity that he brought to Iran’s foreign policy during that 16-year period was a reflection of the confidence that Khamenei placed in him. Rouhani’s best-known accomplishment was his astute management of Iran’s nuclear policy when the Bush administration was threatening to take Iran to the UN Security Council from 2003-05.

But more fundamental to Khamenei’s confidence in Rouhani was certainly the fact that he presided over the building of a successful Iranian deterrence strategy. Iran’s unique approach to defence policy is the result of its relative conventional military weakness and the serious possibility of an attack on Iran from the United States or Israel from the early 1990s on.

The Clinton administration’s demonisation of Iran as a “rogue state” and its accusations of Iranian WMD ambitions and terrorism against the United States left little doubt in Tehran that a possible US air attack against Iran had to be deterred. Meanwhile, both Labor and Likud governments in Israel were making explicit threats to attack Iran’s nuclear and missile programs from 1995 through 1997.

Since Iran lacked an air force, Rouhani and the SNSC adopted an unorthodox deterrence strategy. In the mid-1990s Iran began developing an intermediate range missile that could strike Iraq and that would, with later redesign, be able to reach Israeli targets as well as all US military bases in the region. But that would take the IRGC several more years and was subject to a number of uncertainties. In the meantime, Iran’s ties with Hezbollah provided a more immediate capability. Beginning in 2000, Iran provided thousands of rockets to Hezbollah for retaliation against northern Israel in case of a US or Israeli attack on Iran.

When Israel launched its war in Southern Lebanon in 2006, it was to destroy the key element in Iran’s deterrent. General Mohsen Rezai, the former head of Iran's Revolutionary Guard, commented explicitly on that central reason for the Israeli attack. "Israel and the US knew that as long as Hamas and Hezbollah were there,” he said, “confronting Iran would be costly".

The Israeli war to disarm Hezbollah was a major failure, however, and Iran then supplied Hezbollah with far more numerous, more accurate and longer-range missiles and rockets, to supplement the few hundred Iranian missiles capable of reaching Israeli targets.

But Hezbollah’s role in Iranian deterrence depended on the ability to supply Hezbollah through Syrian territory. The Israelis schemed unsuccessfully for years to exploit that potential Iranian vulnerability by trying to get the United States to overthrow the Assad regime militarily. Now, however, IS and al-Qaeda are threatening to accomplish what the Israelis had failed to do.

That is why Iran’s commitment to the defence of the Assad regime is not a function of the power of the IRGC, but a requirement on which Rouhani and Khamenei are in full agreement. Rouhani’s dual message of diplomatic engagement with Washington and insistence that cooperation on resisting “Daesh” is the priority in Syria reflect the essentials of Iran’s national security strategy.

Photo: President of Iran Hassan Rouhani speaks during the opening of the 70th session of the United Nations General Assembly at the UN headquarters in New York on September 28, 2015. (AA)