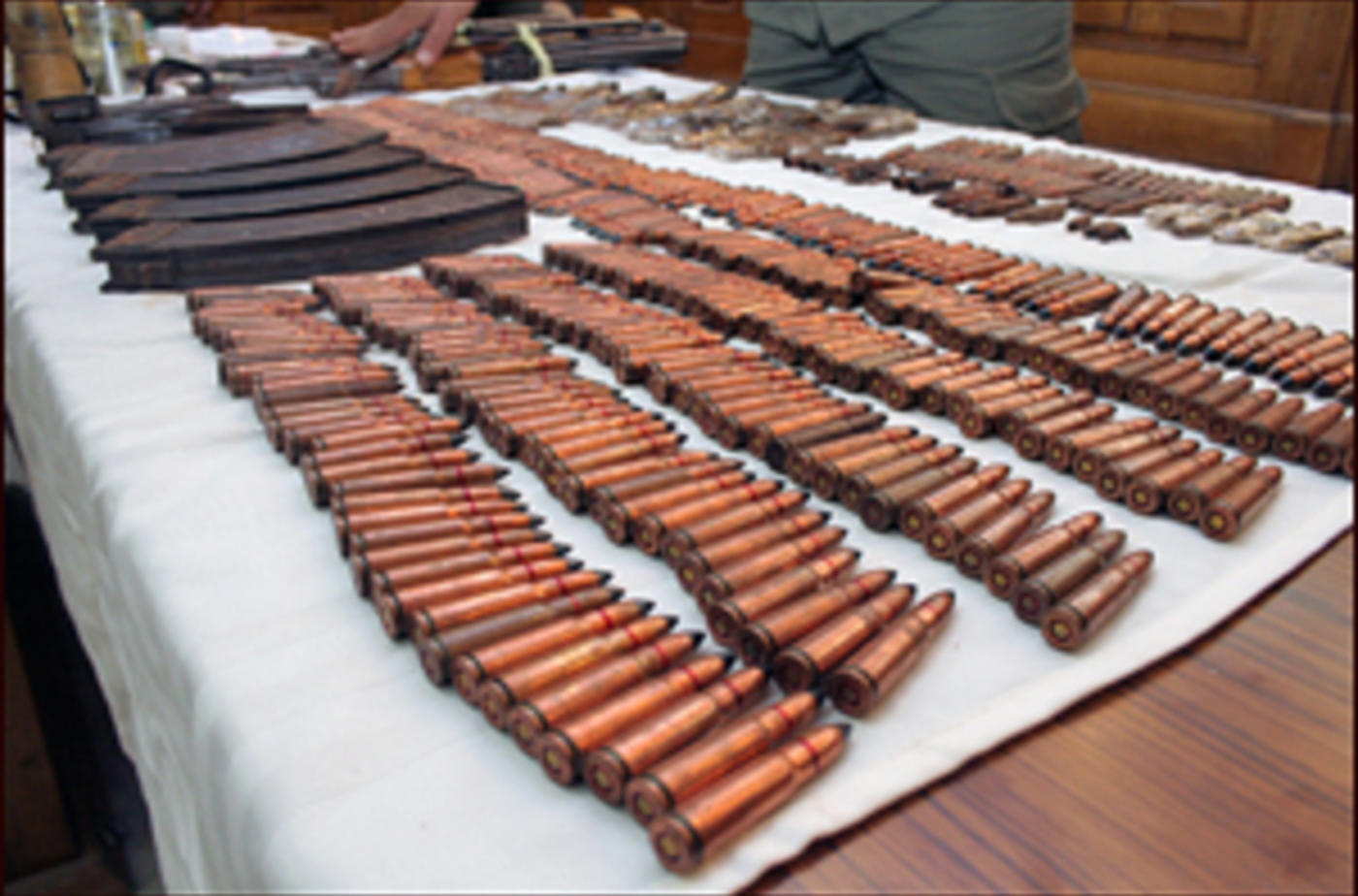 Algeria boasts the largest defence budget in Africa. Over the past decade (2004-2013) its military spending has more than doubled, with an increase of 176 percent, taking total annual spending to $10.4 billion. This makes Algeria the first African nation to tip its defence budget beyond the $10 billion mark.

The Algerian government is spending its billions on a broad upgrade of the country’s defence capabilities. Recent purchases and interest have included unmanned drones and self-propelled artillery from China, an amphibious vessel “Kalaat Bani-Abbes” built in Italy, armoured vehicles from Germany to be assembled in a newly-established plant in Algeria, and a range of substantial purchases from Russia, including helicopters and submarines.

With a decade of bloody civil war behind it, the concern is that new defence spending indicates an even greater security challenge for Algeria over the coming years. And with Africa’s biggest spender wedged between multiple conflict zones, complex geopolitics could well force Algeria to take a more central role in policing the region.

Algeria is an enormous country; the world’s tenth largest, in fact. No other country is larger in Africa and the wider MENA region, and of the Muslim nations, only Kazakhstan is bigger. Algeria sits on the edge of Europe, with just over 200 miles between Oran and the Spanish port of Almeria – about the same distance from Washington DC to New York. Libya and Tunisia stand to Algeria’s east, Morocco and Western Sahara to the west, and Mauritania, Mali and Niger along its southern borders.

Today’s Algerian borders are carved out of the once-vast Maghreb region, which at the height of its past glory included the breadth of all North Africa to the west of Egypt, and even parts of Europe such as Spain, Sicily, and Malta. A nation once famed for its ability to protect its waters, Algeria is today very much concerned with the security of its landlocked borders.

A decade of a bloody civil war across the 90's, bringing with it the tragic loss of over 100,000 lives, gave Algeria the most difficult of lessons in how to protect itself against the threat of domestic terrorism. However, the post-9/11 era has acted as the catalyst for potentially a much more dangerous attack on its borders - both in terms of militancy and extremist ideology.

The NATO-led ousting of late Libyan president, Muammar Gaddafi caused particular instability within the region, with the void left by the former regime partly filled by extremists, including al-Qaeda. And with IS appearing to win the militant power struggle across Syria and Iraq, North Africa has never been more important to al-Qaeda. Even more worrying is that the spoils of the Libyan revolution for extremist militants have been an enormous treasure chest of state-of-the-art weaponry.

Earlier this year, the US State Department issued a report in which it described Libya as a “terrorist safe haven” for militants across the wider region. No country in the region is more affected by this “safe haven” than Algeria. The most formidable group operating in the region is “al-Qaeda in the Islamic Maghreb” (AQIM).

AQIM traces its roots back to the “Armed Islamic Group” (GIA), which fought against the Algerian government throughout most of the 90’s. In 1998 a splinter group of the GIA, called the “Groupe Salafiste pour la Prédication et le Combat” (GSPC), was established by Hassan Hattab. Later hopes that Algeria’s main counter-terrorism strategy, centred around offering extremists amnesty which led to the GSPC laying down its arms, were dashed in 2006 when Ayman al-Zawahiri, the then al-Qaeda No. 2, announced in a video a ''blessed union'' between the two groups. This led the GSPC to later announce in January 2007 that it had changed its name to “al-Qaeda in the Islamic Maghreb” (AQIM).

Although AQIM is said to have links to groups across the Sahel region, there are other militant groups also posing a threat to Algerian security. These include “Ansar al-Sharia,” operating in both Tunisia and Libya, as well as the “Movement for Unity and Jihad” (MUJWA), operating across West Africa.

The rise of militancy across Algeria is aided by an even greater ideological shift in the wider region. As with much of the Muslim world, the past decade has seen an enormous shift in the Islamic landscape of Algeria. The once strong position of traditional Maliki Islam - a school of Islamic law historically concentrated in the Maghreb region - has been challenged by the spread of the Saudi-exported Salafi ideology.

While Salafism and its adherents (Salafis) are not inherently militant, their ideology, particularly with regards to jihad, does lend itself well to the more extremist elements operating out of North Africa and the Sahel region. As mentioned, prior to 2007, AQIM went by the name the “Salafist Group for Preaching and Combat.”

The problem of militancy and extremist ideology is not new in Algeria. Today’s situation represents an evolving narrative of conflict that dates back two decades, if not further. However, the impact of Western foreign policy throughout that period, coupled with an already delicate political quagmire, is also of great concern to the Algerian government.

The extensive 2011 NATO-led military action in Libya created deep-seated instability in the region. The substantial stockpile of arms inherited by militant groups have afforded them the means by which to launch attacks into Algeria and across the wider region. A 2013 UN Security Council report found that a large number of weapons, including RPGs, SNORA rockets and explosives, had passed into Algeria from Libya and were seized by Algerian security forces.

“In the past 12 months, the proliferation of weapons from Libya has continued at a worrying rate and has spread into new territory: West Africa, the Levant and, potentially, the Horn of Africa... Illicit flows from the country are fuelling existing conflicts and enriching the arsenals of a range of non-state actors in the region and beyond,” the UN report concluded.

As was widely reported, in 2013, extremists captured hundreds of hostages in the Algerian desert during the AMENAS gas crisis, resulting in the deaths of 40 hostages - 39 of whom were foreigners. It has not only been suggested that the weapons used were sourced from Libya, but also that the militants where trained in camps situated within Libya. The attack was said to be a response to French military strikes on Northern Mali. Rami al-Obeid, former head of intelligence for the Transitional National Council in Libya, said that with the French strikes on Mali, “Pandora’s box had been opened.''

The growing rhetoric was ramped up on Tuesday by the French Defence Minister, Jean-Yves Le Drian, who urged the international community to take decisive action in Libya, which he described as a growing “hub for terrorist groups.” This week, the US requested the Algerian Government to open up its airspace so that it can be used by the US and its allies as a corridor into Libya. Reports even suggest that in June the Libyan government requested direct Algerian military support, an option played down by Ramtane Lamamra, the Algerian Minister of Foreign Affairs.

And so as the threat of terrorism continues to grow, coupled with historical rivalries between Algeria and its neighbour to the West, the defence budget looks likely to continue to increase. The Algerian mood for spending is summed up by Marco Di Liddo, an analyst from the Centro Studi Internazionali, who said:

“As long as it has gas revenue, a rivalry with Morocco, instability in neighbouring Tunisia and Libya, militants in the south, the need to update an rmy still equipped with Soviet-era equipment and the need to create jobs, defence spending in Algeria will continue to rise.”

Adam Walker has published works on various issues related to the history, law and social affairs of the MENA region. He is also co-editor of the first western encyclopaedia on the Prophet Muhammad.

Photo credit: A weapons stockpile discovered in Tunisia, thought to be have been en route to Algeria from Libya (AFP)