Setting the record straight on Trump’s misconceptions about Syria

Haid Haid
By ignoring the causes of IS’s rise, Trump will be unlikely to defeat IS without the risk of creating an even stronger monster down the line 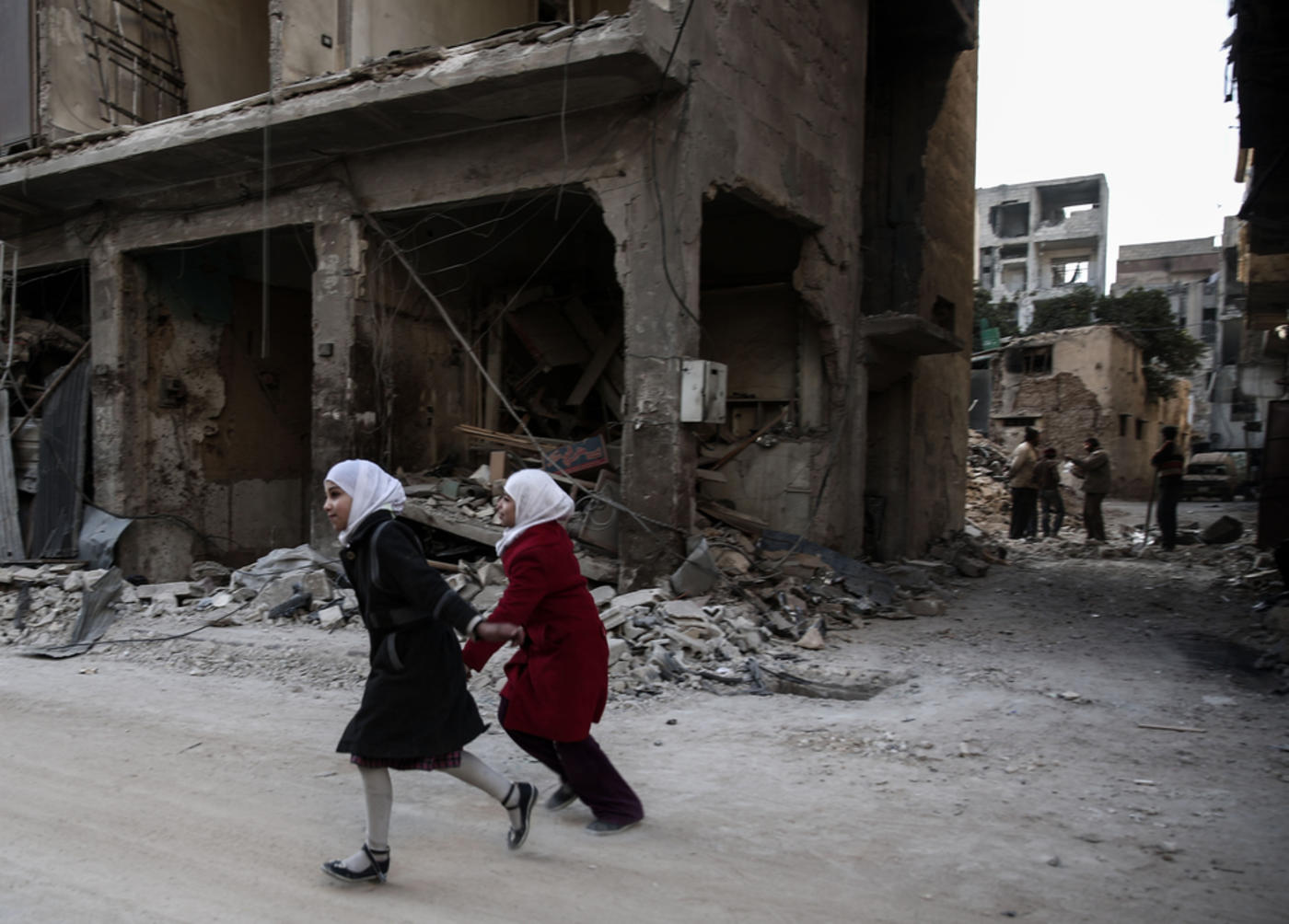 The lack of clear foreign policy pronouncements during Trump’s electoral campaign and his vague, and sometimes contradictory, statements on Syria have led to widespread uncertainty about how he will approach the country’s civil war.

Which comments were purely rhetorical? Which statements did he mean? And most importantly, which ideas – after finalising his cabinet and reading intelligence reports - will he actually implement?

Terminating support for these groups will not only empower Assad, but also further empower extremist groups inside Syria

Trying to predict his future policy towards Syria is a wild goose chase.

However, his statements have revealed that Trump has major misconceptions about what is happening in Syria and, given the potentially disastrous consequences of acting on these fallacies, it is important to set the record straight.

Misconception one: Assad is fighting IS

Trump’s most obvious misconception is linked to the Islamic State (IS) group and the forces fighting it on the ground. He sees Russia, Iran and Assad as allies in the fight against IS.

The Syrian regime, despite its anti-IS rhetoric, has mostly focused on collectively punishing civilians and combating Syrian opposition groups, most of which are supported by the US.

“Whether or not Donald Trump knew then or knows now that Russia and Assad are concentrating their firepower not on ISIS but on Syrian civilians is not material,” wrote Frederic Hof, the director of the Atlantic Council's Rafik Hariri Center for the Middle East.

For a long time, the Syrian regime and IS have avoided fighting each other using the-enemy-of-my-enemy-is-my-friend logic. IS operated mainly in regions outside the regime’s control which weakened other opposition groups.

IS’s presence has also bolstered the regime’s narrative that what is taking place in Syria is a war between a secular regime and terrorist groups. In return, the Syrian regime was avoiding targeting IS, which was helping in eliminating his opponents.

Similarly, while Russia asserts that it is fighting IS extremists in Syria, the majority of its air strikes have targeted opposition groups threatening the Syrian regime.

The atrocities committed by the Syrian regime and its allies, which far outnumber those committed by IS and other jihadist groups, have allowed IS to flourish in the first place.

Trump’s misconception, which ignores the political, economic, social and cultural causes of IS’s rise, means he will be unlikely to defeat IS without the risk of creating an even stronger monster down the road.

Misconception two: The US doesn’t know which rebels it is arming and should stop

In an 11 November interview with The Wall Street Journal, Trump said that he was likely to abandon the US effort to support moderate rebel groups in Syria who are fighting against the Syrian regime.

“I’ve had an opposite view of many people regarding Syria. My attitude was you’re fighting Syria, Syria is fighting ISIS, and you have to get rid of ISIS. … Now we’re backing rebels against Syria, and we have no idea who these people are,” he said.

In the past, Trump also suggested that the defeat of Assad could actually lead to something worse in the aftermath, assuming it did not result in a war with Russia.

While Russia asserts that it is fighting IS extremists in Syria, the majority of its air strikes have targeted opposition groups threatening the Syrian regime

Most of the US support for rebel groups fighting the Syrian regime is run by the Central Intelligence Agency (CIA). The second US effort is in support of the anti-IS Syrian Democratic Forces (SDF) –a Kurdish-led alliance with some Arab and Assyrian fighting groups, which is run by the Pentagon.

The covert CIA programme is by far the largest conduit of support, providing anti-tank missiles to rebels fighting the government, which Trump may wind down or abandon.

A push to the extreme

Although the US support for rebel groups is limited, it is still considered one of the main sources of weapons and equipment for some groups.

Contrary to Trump’s misconception, all rebel groups supported by the CIA go through a long and thorough vetting process, which allows the CIA to know everything not only about those people but also about their family members as well.

The Syrian regime has not been willing to meaningfully engage in any political settlement to share power and end the conflict in Syria.

To continue receiving supplies, the vetted rebel groups must also record their use of weapons to prove that they have not sold or shared arms with non-vetted rebel groups. These groups were the ones that fought IS in 2014 and pushed it out of most of Aleppo and Idlib provinces. Some of those groups are also part of an ongoing Turkish-led campaign, the Euphrates Shield, which is actively fighting IS in northern Syria.

When US support to Syrian rebel groups has waned, many groups have been weakened, pushing their members to defect and join better funded radical groups.

It also pushed most rebel groups to ally with the better trained and equipped extremist groups such as Jabhat Fateh al-Sham, the rebranded former al-Qaeda affiliate Jabhat al-Nusra, against the Syrian regime.

Terminating support for these groups will not only empower Assad, but also further empower extremist groups inside Syria. Extremist groups will be able to promote themselves as the only power capable of stopping Assad’s atrocities. Fear will become their best recruiting tool.

Focusing on defeating IS by providing the Syrian Kurdish-led forces with more support will only further complicate the Syrian conflict and lead to secondary clashes. The US has continued to support the SDF despite an increase in reports accusing them of committing violations against Arab communities.

Such violations and practices have increased tensions between Kurds and Arabs and led to mistrust in the Kurdish-led SDF alliance. It has also triggered Turkey, which considers the Kurdish component of the SDF as a security threat and as terrorists linked to the Kurdistan Worker’s Party (PKK), to partner with rebel groups and intervene militarily in Syria to keep the growing power of the Kurds in check.

These tensions and competition over territory have manifested in military confrontations between the Turkish-led groups and the SDF around northern Syria.

Additionally, IS losses against the Kurdish-dominated SDF, which locals in IS-controlled areas do not see as friendly, allow the terrorist group to benefit from its defeats and use fear as a recruiting tool.

Terminating support to rebel groups also has significant political consequences. The Syrian regime has not been willing to meaningfully engage in any political settlement to share power and end the conflict in Syria.

Speaking to Danish television last month, Bashar al-Assad vowed to recapture all of Syria, adding that he prefers to do so using local deals and amnesties that would allow rebels to leave to other areas.

Thus, terminating support to rebel groups, in absence of a widely accepted political solution, will prolong the conflict, increase the number of displaced people, internally and externally, and turn Syria into a failed state permanently.

Most of Trump’s misconceptions about Syria direct his focus toward the symptoms of the conflict in the country rather than its root causes.

Rather than guessing what his policy will be, it is important to correct his misleading views before it is too late.

Image: Two Syrian girls walk on a heavily damaged street on November 22, 2016, in the rebel-held town of Douma, on the eastern outskirts of the capital Damascus. (AFP) 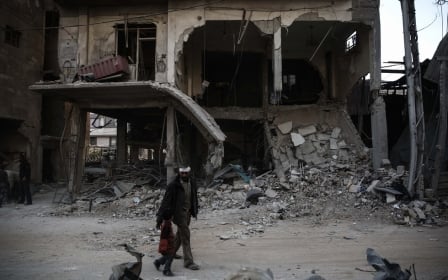 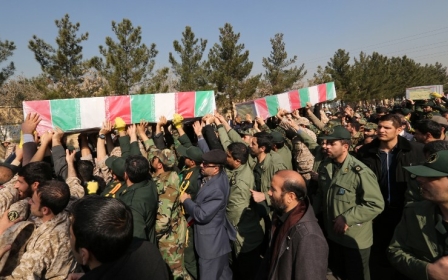 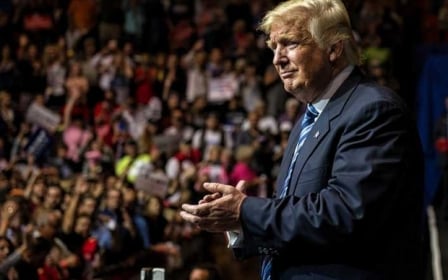