The 'Sisification' of Egypt's media 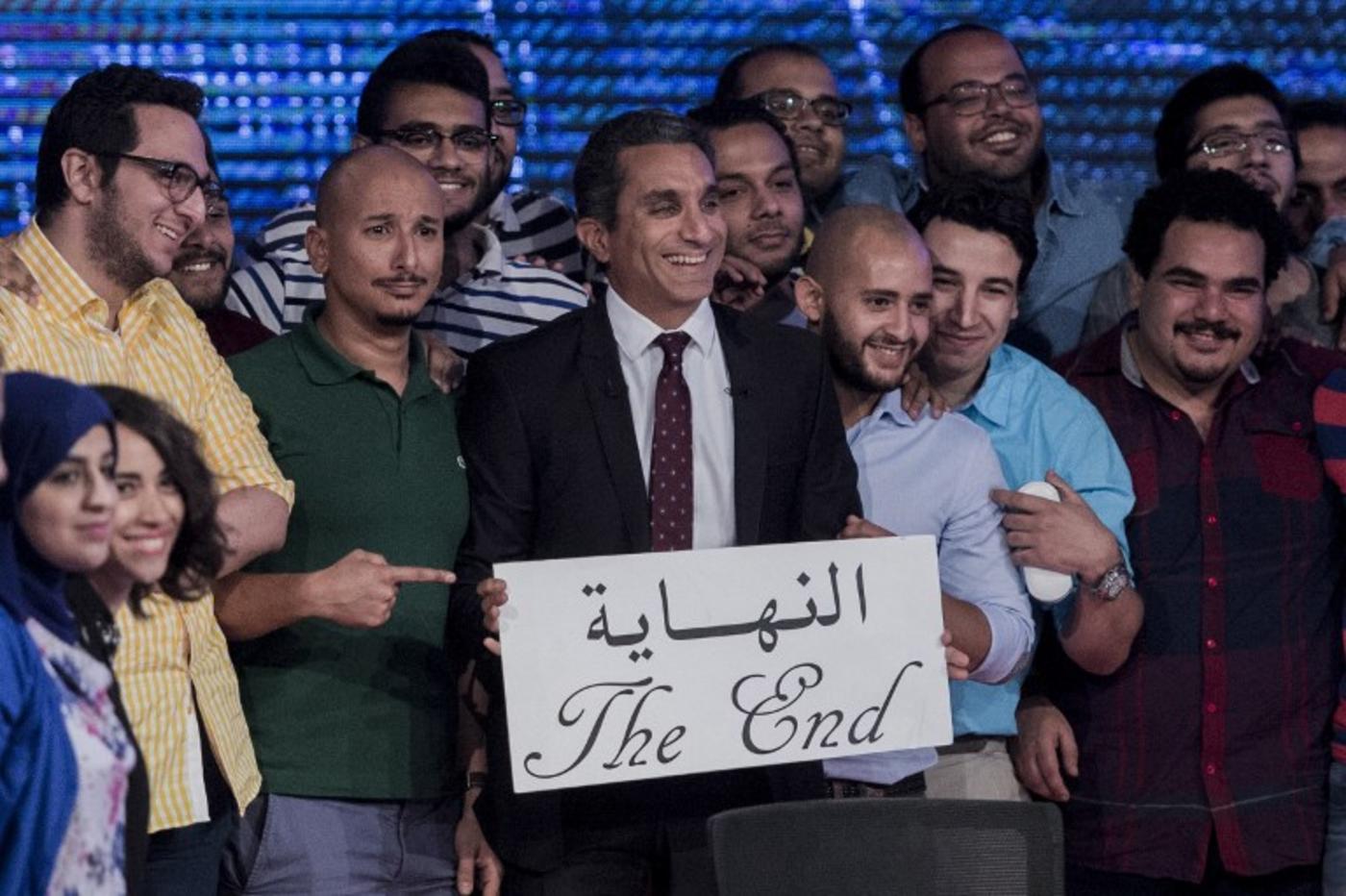 Shortly after the ousting of President Mohamed Morsi, Egyptians jokingly said that maybe the only benefit we reaped out of the January 25th Revolution was that the clock no longer changes after being shifting back and forth during the summer and winter under Mubarak. Yet, Field Marshal Abdel Fatah al-Sisi has put an end to this joke: he decided to shift the hour not twice per year as before, but almost four times this year.

Aside from this, a clear fact is that the only positive change Egyptians are left with now is that they count. Before the revolution, politics in this Pharaonic-descendent state was managed from above with little or no consideration of the weight of public opinion, because the public ineffective or easily manipulated. However, the revolution proved this practice wrong: Egyptians mobilised themselves against the 30-year-old authoritarian state leading to change, albeit momentary.

As the former head of military intelligence and someone who monitored the recent political changes closely, Sisi is well aware of the danger of united public opinion against a standing regime. Such understanding was a key factor that allowed him to orchestrate the 3 July coup. Sisi's understanding of the importance of media and controlling public opinion is documented in leaked videos of him during Morsi's era when he stressed the importance of close cooperation between the military and private media. In August 20122, when he served as minister of defense, he said, "We [the Armed Forces] were concerned with this [controlling private media] since day one of the SCAF. To do this, you have to have arms, and to form an arm on the level of a state, it takes long time and effort […] It takes a long time to be able to acquire a suitable portion of influence through media. Are we working on this? Absolutely yes. We are getting better results, but what we need, we didn't achieve yet."

In hindsight, it is clear that the 30 June mass mobilisation was the aim that Sisi hadn't achieved yet back in 2012.

Now on top of the state, Sisi is using the same tool, yet in the opposite direction: he is demobilising people. The de-facto president is keen on implementing a strategy that will guarantee that the January 25th scenario does not take place against him, through controlling the minds of masses.

Throughout the past fifteen months, there have been clear and swift measures to isolate the Muslim Brotherhood and their allies and sympathisers from specific entities that enjoy influence over masses. The list of controlled mediums goes from social media pages to schools and charities.

Right after Sisi’s July 3rd speech, at least six satellite channels were closed, including the Brotherhood’s Misr 25 and the well-known Islamic channel, al-Nas. Al-Jazeera Mubasher Misr’s office was stormed by security forces while on-air. The channel's staff was arrested and equipment confiscated. Newspapers were banned, including the Brotherhood’s Freedom and Justice Party - party is now also banned - and al-Sha’ab of Istiklal Party.

As authorities have orchestrated the unfolding “Sisification” of the media, at least 125 journalists were arbitrarily arrested between July 2013 and March 2013, according to Reporters without Borders.

In fact, as a result of the critical role that social media played in January 25th Revolution, the regime has actually been focused on it since day one. Critics of the regime were monitored and imprisoned before the introduction of the new surveillance system. Amnesty International reported that “dozens of Egyptians have also been arrested for electronic communications and posts including on YouTube, Facebook or Twitter.” And news reports frequently announce the detention of Facebook administrators running opposition pages.

But the efforts to deny the opposition influence over masses went even further.

In June 2014, Adly Mansour - appointed as president by Sisi in his July 3rd speech - issued a law prohibiting any uncertified religious leader from practicing preaching or giving lessons in mosques. If a leader is caught breaking the law, he or she could face months of imprisonment and a heavy fine.

In December 2013, the regime announced the confiscation of 87 private schools claiming that they belong "to the leaders of the terrorist Muslim Brotherhood group."

In the same month, the regime announced that it had seized the money of about 1,000 charity organisations either owned by Brotherhood members or “connected one way or another” with the banned group. From its inception, charities have been a key tool for the Brotherhood to spread its grassroots influence. Hence, the regime was keen on cementing its control over charities and NGOs at large through the introduction of a law regulating their work.

The law, noted Human Rights Watch, "would empower the government and security agencies to dissolve existing groups, pending a court order, or refuse to license new groups if it decided their activities could ‘threaten national unity.’”

Along with denying opposition channels the means to influence public opinion, the regime has also worked hard to gain a monopoly over public perception and steer the people towards its version of different events and its political vision.

First, and most importantly, the regime does not allow the public to know their collective opinions about political issues. For example, official public opinion studies and poll results are all in the hands of the regime, not the public. After all, Egyptians had not realised that Mubarak lacked public support until mass demonstrations kicked off the January 25th Revolution took place. One could claim that there is no single, credible centre for public opinion studies in Egypt; most credible polls are done by foreign organisations like the Pew Research Center.

Second, the regime uses its strong connections with private media channels — controlled by few number of businessmen who were mostly affiliated with Mubarak’s regime — in order to disseminate its particular intepretation of events. This can be witnessed on daily basis for those watching the private satellite channels closely; the same message and perspective on any one event is repeated on all channels, and sometimes with the same guests over the phone or in the studios.

In addition to these tactics, Sisi meets regularly with heads of media organizations, famous TV presenters, and journalists. A briefing of such meetings is usually announced by the attendees through their media outlets.

End result: those opposing the regime have to feel that they are a minority.

Those who still dare to oppose must be heavily punished, leaving fear as one of the regime's strongest tools.

The first and biggest mass punishment was the Rabaa Square massacre. According to the Human Rights Watch report released in August, at least 1,150 demonstrators were killed by the Egyptian security forces in “one of the world’s largest killings of demonstrators in a single day in recent history.”

Other sorts of punishments include those handed through the judiciary system. In one trial, an Egyptian court handed out “death sentences like candy” — as Sarah Leah Whitson, Middle East and North Africa director at HRW coined it — to 683 people; and, it goes without saying that life sentences and death penalties were handed down to Brotherhood leaders with ease.

Less harsh punishments include defamation and confiscation of property. Until recently, a TV show called “the Black Box” — presented by a journalist widely known to be connected with the security establishment — was dedicated to broadcasting recordings of private phone calls of political activists with the aim of defaming them.

In an effort to control public opinion, the regime closely monitors public reaction to the different political changes, especially controversial ones. If public opinion studies conducted by the security establishment show an increasing dissatisfaction that could spin out of control, then the regime acts to decrease the pressure.

Take the recent electricity shortages. Egypt has experienced such power shortages for months, resulting in blackouts throughout the country on a daily basis, often several times each day.

But when the crisis became acute in August and resulted in a clear and wide public discontent, the regime ordered the reduction of the power outage — meaning higher pressures on the generators beyond the capacities they could handle — which led to an even bigger crisis: on 4 September, a huge power outage in Cairo knocked out vital services for several hours, shutting down numerous TV and radio stations. One of the city's three metro lines stopped operating and another was heavily disrupted, as were water supplies to households and businesses.

In an attempt to reduce the discontent of masses, the regime makes empty announcements about future improvements in services, revisions of controversial laws and promises of future prosperity.

However, facts on the ground show that prices are going up, subsidies are reduced, service quality grows poorer, and the quality of life is not anywhere near better than it was under Morsi. The regime is running out of arguments; to this day, Sisi’s regime has faile d to improve the lives of Egyptians.

Looking back, Mubarak’s regime mastered its control over masses and its command of public opinion; it lasted for 30 years, yet 18 days of mismanagement brought it to its knees.

The question is: how long can Sisi’s regime hold on? And how capable is it really of controlling Egyptian minds?

With increasing economic pressures and human rights abuses, the tipping point will be when Egyptians opposing the regime realise that they are not a minority … and the cycle continues.

- Abdelrahman Rashdan is a political scientist specialised in national security and the Middle East.