The speech which may silence Netanyahu

Meron Rapoport
By going to the Congress against Obama's will, Netanyahu hopes to gain friends in America and voters in Israel. He might lose both. 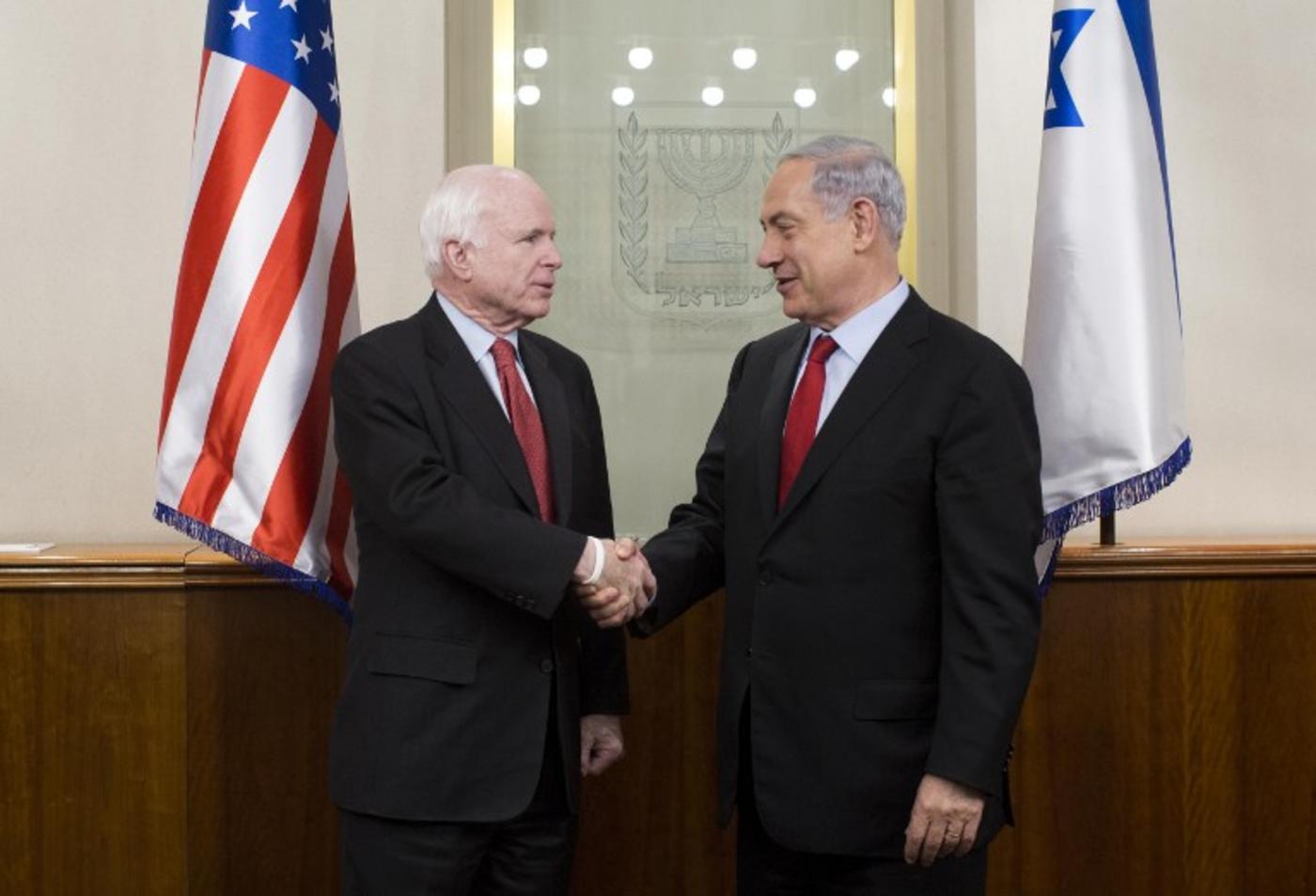 Reading the American press, it’s abundantly clear what the aim is behind Benyamin Netanyahu's surprise invitation to address both chambers of the US Congress: to torpedo a possible nuclear deal with Iran. From reading the Israeli press, it is just as clear what the aim of his speech to Congress, scheduled for 3 March, two weeks before the election is: to secure another term in office for Netanyahu.

Both are probably right. MJ Rosenberg explains in The Nation how Netanyahu can help Republicans to foil President Barak Obama's intention to veto new sanctions on Iran, which Congress is about vote on. Republicans need a two-thirds majority to override Obama's promised veto. Netanyahu, the greatest world champion in the fight against any deal with Iran, seemed the right man for the job.

Netanyahu, as Rosenberg mentions, is not unfamiliar with meddling in US politics. The latest and most explicit example was his almost official endorsement of Mitt Romney in his run against Obama in 2012. The American billionaire Sheldon Adelson, one of Netanyahu closest friends and the owner of a daily Israeli newspaper (Israel Hayaom) which functions as Netanyahu's personal news organ, contributed more than $20 million to Romney's campaign.

Ron Dermer, Israel's ambassador to the US, is very helpful in this kind of strategy. Born in Florida, Dermer began his political career as an adviser to Newt Gingrich, then Republican Speaker of the House of Representatives, before emigrating to Israel where he became Netanyahu's speech writer and later his senior political adviser. Many in Israel regard Dermer as Netanyahu's personal envoy to the US rather than Israel's ambassador.

According to Rosenberg, Dermer "cooked up" the invitation for Netanyahu together with the current Republican Speaker John Boehner. Probably it was not too difficult to convince Netanyahu to join in. For him, it's like killing two birds with one stone: continuing his crusade against Iran's nuclear capability while helping his Republican friends in Washington.

Yet a third bird is sitting on the branch in Capitol Hill: the Israeli elections. Netanyahu is in desperate need for an agenda in his campaign, far away from the socio-economic field where his opponents – from Labour but also from other parties – want to drag him into the mire. A few weeks ago he made an attempt to campaign for a reform in Israel's political system toward a presidential model, but failed to gain any enthusiasm.  Coming back to his familiar theme - the trustworthy leader, ready to defend Israel against all odds - seems like a logical political conclusion.

Some of Netanyahu's critics in Israel hinted that the targeted killing of senior Hezbollah officials and of an Iranian general in Syria early last week was part of the same campaign's strategy. Without inside information, it's impossible to tell how much truth is in such a claim. But a speech in front of the American Congress, with dozens of expected standing ovations by congressmen and senators, broadcast direct to all Israeli TV networks two weeks prior to election day, is undoubtedly a political manoeuvre.

Netanyahu was never truly loved by Israelis, even by those who kept on voting for him. But he was respected by many as one who could articulate Israel's case without bowing under outside pressure. The fact that Netanyahu does it in perfect English at the heart of the foreign country which really counts in Israel - the US - was always one of his strongest points, back from his days as ambassador the United Nations in the 1980s. It was therefore reasonable for him to hope that his speech in Congress will at least strengthen his somehow shaken political base at home, if not bring back disillusioned voters.

Yet counting on a success in America to help him in local elections may prove a double-edged sword. Israelis may appreciate Netanyahu's strong stand against Obama on such a sensitive issue, but at the same time they would not be happy to see the US administration turn against Israel. As long as threats of isolation are coming from Paris or London or Moscow, Israeli voters tend to ignore them or view them as signs of anti-Semitism. When the same threats are coming from Washington, they do have an effect.

This was most evident in 1992, when Prime Minister Yitzhak Shamir got into direct confrontation with the US administration over his insistence on continuing building in occupied East Jerusalem. Secretary of State James Baker responded by telling Shamir to call the State Department switchboard "when he is serious about peace" and withheld the loan-guarantees Israel was so in need of in those days. Almost all political analysts agree that this "cold shoulder" by the US was one of the main reasons for Shamir’s defeat to Yitzhak Rabin in the elections held the same year.

Four years later, in 1996, the Clinton administration tried its best to help Shimon Peres to win elections against Netanyahu, who ran for the first time. Peres was even invited to the White House a short time before election day, drawing sharp criticism from the same Netanyahu for "interfering" in the political process in Israel. Yet all this effort was in vain and Peres lost the elections.

Up until the sudden invitation to Netanyahu, the Obama administration didn't show any intention to openly influence the Israeli elections, despite its apparent discontent with the current Israeli government. On the contrary, the US administration helped to prevent a UN Security Council decision to set a date for a recognition vote on an independent Palestinian state, thus giving Israeli diplomacy - and Netanyahu himself - an achievement to show to the Israeli electorate.

Yet the invitation sent behind Obama's back changed all that. It might be that Obama just waited for this opportunity and it might be that he truly felt cheated and offended by a leader he never liked for one moment. The reaction was blunt. Instead of just avoiding meeting Netanyahu when in Washington, President Obama and Secretary of State John Kerry criticised Netanyahu's move in undiplomatic language.

"Typical protocol would suggest that the leader of a country would contact the leader of another country when he’s traveling there," was the comment of  the White House press office regarding  Netanyahu's visit, "so this particular event seems to be a departure from that protocol."

In private talks, US officials went even further. Haaretz quoted some of them yesterday as saying that the word "chickenshit" - attributed to Obama when describing Netanyahu in an interview a few months ago - is the mildest used in the White House when referring to the Israeli Prime Minister. Already before this incident, US diplomats began searching for ways to pressure Netanyahu in an effort to resume Israeli-Palestinian negotiations after the March elections. Now they may have found a way to get rid of him altogether.

It is too early to see where this "speech crisis" will lead to. Israeli voters are schizophrenic about the US. On the hand, they understand how much Israel is dependent on the US, not only in military aid but in the political "umbrella" it is offering Israel in all international institutions. This is very evident among center and center-right voters, exactly the one so needed to secure a victory for Netanyahu.

On the other hand, many Israelis learnt to believe -  especially among rightwing voters but not only -  that the US needs Israel even more the Israel needs the US because Israel is supposed to be an American aircraft carrier in the Middle East. For them, a confrontation with Obama, already suspected as anti-Israeli and pro-Muslim, is just a confirmation that Netanyahu understands American interests better than its own president.

Obama's firm stand against Netanyahu may help him to prevent Democrats from supporting the sanctions bill against Iran in Congress, preventing Republicans from reaching the two-thirds majority needed to overrule his veto. It may also convince some Israelis that Netanyahu is a threat to the future of US-Israeli relations. In such a case, the stone that Netanyahu threw at the birds on the branch may fall on his own head.

Photo: Israeli Prime Minister Benjamin Netanyahu (R) shakes hands with US Senator John McCain during a meeting between Israeli officials and an US Senators and members of their delegation on January 19, 2015 at the Prime Minister's office in Jerusalem. AFP