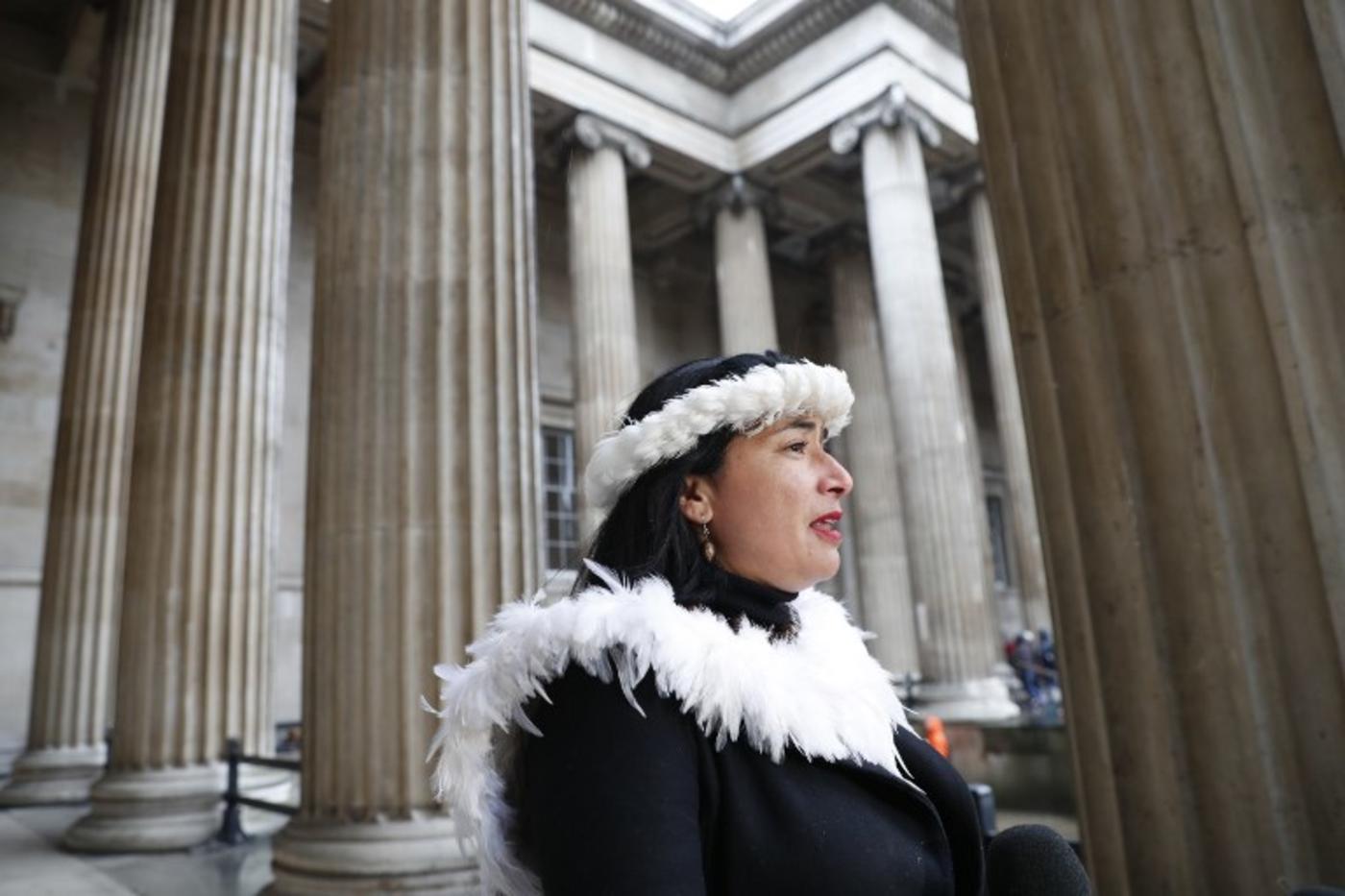 Last Saturday, around 200 people attended an unofficial Stolen Goods tour at the British Museum in London. Iraqi, Maori, Greek Cypriot and Hawaiian activists congregated to call for the return of looted goods to their countries of origin.

That descendants of former colonies have to scrap and plead for the return of illegally procured artefacts is not just salt in a violent and brutal wound; it amounts to the continued promotion and defence of colonialism.

In failing to acknowledge the criminal origins, and ongoing damage, of artefacts that are rightfully the property of other nations, museums contribute to the colonial nostalgia that blights Britain, where 59 percent of citizens are proud of the British Empire and 49 percent believe it left former colonies better off.

This year, a number of nations plundered by the British Empire put forward official requests for the return of culturally, religiously and historically significant artefacts. But Britain’s failure to acknowledge its historical crimes - both diplomatically and socially - has resulted in a status quo that prioritises the rights of the coloniser to keep illegally acquired artefacts over the rights of plundered nations to their cultural property.

In November, Egyptian authorities renewed a decades-long call for the return of the Rosetta Stone in time for the opening of Cairo’s long-anticipated Grand Egyptian Museum in 2019. The artefact, one of the British Museum’s most visited objects, was seized by British soldiers in 1801 after they defeated Napoleon’s army in Egypt.

Why must the financial and emotional burden to learn about one’s own cultural history fall upon those who were brutalised by the regimes that now profit from their colonial plunder?

Two weeks later, the governor of Easter Island gave a tearful plea to the British Museum to return - even on loan - an eight-foot-tall statue, the Hoa Hakananai, meaning “lost or stolen friend”, which was taken from the Chilean island without permission in 1868. Governor Tarita Alarcon Rapu told the museum that the English “have our soul”.

The Stolen Goods tour coincides with the celebrated exhibition at the British Museum I am Ashurbanipal, which runs until 24 February. The collection contains tens of thousands of ancient Assyrian objects, plundered and commandeered in the 19th century from modern-day Iraq by Austen Henry Layard, who is lauded for his discovery, while the subsequent theft of the often priceless artefacts has long been forgotten.

The Iraqi government has also protested the sale of a 3,000-year-old Assyrian relief that was auctioned at Christie’s New York in October for $28m. Cultural heritage should not be for sale and must never belong to an individual, and the auction of Iraqi and Assyrian history validates and sustains the West’s long history of colonial looting.

However the archaic British Museum Act of 1963 prevents the museum from officially removing artefacts from its collection, except in very exceptional – and rare – cases. As a result, most calls for artefact repatriation are unofficial and public. The Act – which the British Museum says is not seeking to amend - not only renders it difficult and costly for the British Museum to fulfil its moral obligation, it also reinforces the antiquated social acceptance of Britain’s right to plundered artefacts, regardless of how violently they were seized.

The romanticism of looters in entertainment also desensitises us to the plundering of cultural heritage. Literal tomb raiders, such as Lara Croft and Indiana Jones, are hailed as heroes for stealing priceless artefacts. In The Temple of Doom, Indiana Jones confesses he is motivated by fame and fortune; in Raiders of the Lost Ark - as if the title weren’t bad enough - he steals a statue and is then famously pursued by a large boulder.

The fact that he robs the majority of items to be “safeguarded” in Western museums does not make the crimes any less illegal.

The British Museum promotes itself as the museum of the world for the world, arguing that it is a house of history that is free to enter. In a statement to Middle East Eye, the British Museum said it believes "there is a value in sharing these collections as widely as possible so they can be seen by as large a public as possible."

But how many ordinary Iraqis or Egyptians are able to get a visa to Britain, let alone afford a trip to London? Why must the financial and emotional burden to learn about one’s own cultural history fall upon those who were brutalised by the regimes that now profit from their colonial plunder?

The argument that Western countries can better present and preserve these stolen artefacts is a popular but racialised assertion. It is also untrue. Many of these objects lay privately owned for decades, and are not displayed today in a context that recognises the violent cost of their acquisition - nor do the exhibitions acknowledge the trauma they inflict on visitors from former colonies.

The British Museum reponsded to MEE by saying: "We would certainly refute the notion that we are promoting colonialism. The Museum's purpose is to ensure this world collection is available to the widest possible public for free. It is a unique resource: the breadth and depth of its collection allow a global public to examine cultural identities and explore the complex network of interconnected human cultures."

Where is the lesson?

The misrepresentation of museums as happy family diversions decontextualises the cultural property of foreign countries as nothing more than a feast for the eyes. For establishments that are supposed to educate, where is the lesson in this?

Ghanaian gallerist and historian Nana Oforiatta Ayim explains: “In the British Museum, you have the African galleries, and it’s like, ‘This drum is from 1500 Ashanti,’ but there is nothing else about it. You don’t know what it is used for, what context it’s from, how it was brought here, who stole it. The museum as it exists today is so much an imperialist project and is so much about power.”

The British Museum's new gallery: A history of Islam in over a thousand objects
Read More »

The British Museum has a collection of eight million objects, but only one percent of them are on display at any time. Does this mean they are incapable of adequately preserving and displaying their collection, or do they have more artefacts than they know what to do with?

The training of Iraqi archaeologists by the British Museum in the wake of the Islamic State’s destruction in Iraq bears commending and is a testament to the desire and capacity of former colonies to preserve their artefacts. Last month, the museum agreed to return some of the Benin bronzes to Nigeria, to be housed at the new Benin Royal Museum.

In April, the Victoria and Albert Museum announced plans to return on permanent loan items looted by British soldiers 150 years ago.

The time is right for museums that have long benefited from plundered artefacts to assist in repatriating cultural property. In some instances, nations have the facilities to house priceless items, as with the opening of a billion-dollar museum in Cairo.

In other cases, the burden must fall on those who have benefitted from looted artefacts to assist nations with the rehousing of these priceless items.

The British Museum stressed in its statement to MEE that they were not involved in the removal of the Hoa Hakananai statue and the Rosetta Stone, but were given them at a later date. This is perhaps the most problematic notion – that just because a museum did not directly commit the theft, the artefact is theirs to keep.

Institutions may not be held responsible for the murky history of their artefacts, but they should be accountable for perpetuating this theft, and for promoting the colonial legacy.

- Ruqaya Izzidien is a British-Iraqi freelance writer and author specialising in social and cultural affairs. Her work has been published in The New York Times, the New Statesman, the BBC and Al Jazeera English.

Photo: Tarita Alarcon Rapu, the governor of Easter Island, gives a news conference outside the British Museum in London after requesting the return of the Hoa Hakananai artefact on 20 November (AFP)

Culture
Tracing the history of the Mamluk carpets that dazzled the Mediterranean
Inside Egypt
'Eyes wide shut': Has Egypt's Great Sphinx really closed its eyes?
TV
Six things we learned from Arab TV shows this Ramadan Inside Lebanon
Hezbollah museum: Shrine to resistance or a dying image?