Thanks for visiting, Donald. Now show us your real intentions 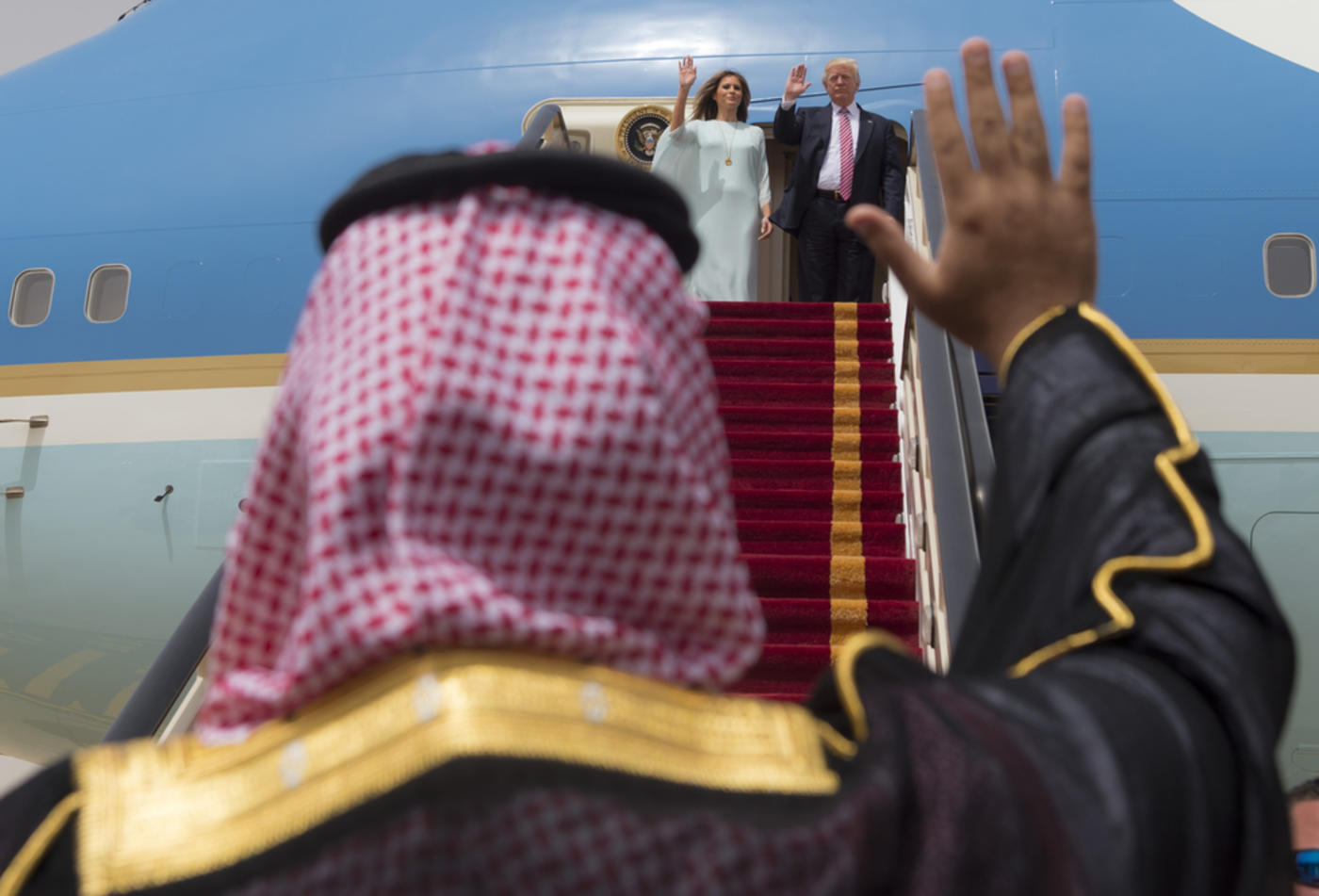 Britain had been expected to be US President Donald Trump's first stop on his first foreign trip after Prime Minister Theresa May invited him to make an official visit earlier this year.

But Britain is now focused on elections that will take place in June and, more importantly, it is not a country that is expected to provide a welcoming environment for the president.

Overestimating Trump’s intentions and promises, or expecting a substantial change compared to Obama’s policies, may not lead to a happy ending

Trump's election generated a widespread sense of dismay within British public opinion which has been deepened with the president's governance style and the decisions so far adopted by his adminstration.

Although officially Britain is keen to bolster its “special relationship” with the US, Trump’s arrival in Britain - should he actually accept the invitation - will not pass without demonstrations and protests.

In this sense, Saudi Arabia must have seemed a much safer, more welcoming and reassuring location for the leader of the most important country in the world.

Generally speaking, and regardess of Trump’s assessments and motivations, Saudi Arabia has the right to celebrate his visit. The fact that the kingdom happened to be his first destination not only underlines the importance of American-Saudi relations, but also points to the top position the Middle East occupies in his administration’s list of priorities.

During the Obama years, which saw the US president make several visits to Saudi Arabia, the Middle East was not high on Washington’s agenda. It was not until the Islamic State (IS) had seized control of more than a quarter of Iraq and a large segment of Syria that the former president felt compelled to pay attention to the region.

So Trump's visit communicates that his adminstration is shifting the US foreign policy and making Saudi Arabia its gate to the region - at least, this is how it seemed at first.

Hours after landing in Riyadh on Saturday, the US and Saudi signed a series of agreements including a massive $110bn arms deal. Saudi has also announced recently that it intends to invest billions into US infrastructure projects.

Both steps are considered to be a decision on Riyadh's part to contribute to the success of Trump’s administration, helping him fulfil his pledge to restore confidence in the US economy and reinvigorate US domestic capabilities.

Riyadh invited many Arab and Muslim leaders known to be on good terms with both Saudi Arabia and the US to join the summit meeting with Trump, yet more evidence of the hopes pinned on the US administration and what it can help accomplish in the region fraught with crises.

These hopes haven't come from thin air. From Riyadh’s point of view - and also from the view point of several other Arab and Islamic countries - during his first three months in office, Trump has been reassuring in several ways.

While his domestic policy decisions have shown signs of foolhardiness and inconsistency, Trump’s foreign policy strategy seem to be more consistent. For key national security and foreign policy positions in his administration, Trump appointed several people known to be opposed to Iran’s expansionist inclinations and also those who have spent years of their professional life in the Middle East.

In addition to his repeated opposition to the Iranian nuclear agreement, Trump also declared unequivocally that he would push back against Iranian expansionism.

Despite rumours - and his own suggestions on the campaign trail - that Trump would be more prepared to coexist with the Assad regime, he did not hesitate to strike Assad’s airbase which the Syrian leader used to launch the recent chemical attack against his people in Khan Sheikhoun.

And even with regard to the most chronic problem of the Middle East, the US president affirmed his intention to exert a special effort in order to reach a settlement for the Palestinian problem.

This is the background to the optimism surrounding the vision by Saudi Arabia and its allies in the Trump administration; the optimism that has led to the ceremonial preparations for welcoming him and celebrating his visit.

But the problem is that any deeper investigation into Trump’s foreign policy, or at least what has surfaced of it so far, leads one to take a more reserved assessment and to proceed cautiously about just how much his approach varies with that of the Obama administration.

Little has transpired so far to reveal Trump's strategic vision of the world. What is his vision for relations with Russia and China? With the European allies and NATO? Or for the main international institutions, from the United Nations to the World Trade Organisation? What are the main goals he intends to accomplish internationally? Aside from a couple of retreats from populist pledges and an obscure sense of his means and goals, nothing is clear.

Aside from a couple of retreats from populist pledges and an obscure sense of his means and goals, nothing is clear

In contrast to campaign slogans suggesting that the US under Trump would wage an economic war against China, Trump now appears to be inclined to build a relationship with Beijing and negotiate a deal over North Korea. And instead of the policy of understanding and cooperation with Russia, there now seems to be a retreat to the same positions of dispute that characterised the  years since 2012. As for ridiculing NATO and European allies, Trump now looks ready to reaffirm America's commitment to both.

As for the Middle East, there is nothing to indicate a substantial change in the policy adopted by Obama during his second term in office. The Trump administration has shown no interest in the question of democratic transition, nor in the true causes of regional chaos and instability. The administration has not decided yet whether it is committed to the two-state solution for the Palestinian problem.

The war against the Islamic State (IS) group and terrorism is still America's priority, but of course one that shouldn't require costly American engagement on the ground. Washington’s rhetoric toward the Assad regime shifted slightly, but without any tangible change in the facts on the ground.

Sectarian militias are spread across Syria. The regime continues to adopt the policy of displacement and sectarian population engineering in various parts of the country without any comment from the US administration. Even as Washington reacts to the use of chemical weapons, no limits whatsoever have been set on the regime’s use of every other type of weapon in exterminating its people and oppressing its opponents.

In other words, if the Trump administration has become more determined to see the back of Assad and his regime, there is no evidence so far that it is doing anything tangible to achieve this goal.

In Iraq, the US is still preoccupied with the battle against IS, and in doing so, it is allied with the Popular Mobilisation Units (hashd al-shaabi), which are loyal to Iran. The US administration has not exerted any effort so far to effect a substantial change in the sectarian structure of the Iraqi regime or in the manner in which the regime has been dealing with the Sunni-majority provinces.

So far, Washington has also shown little sign of adopting a policy that demands the withdrawal of Iran and its Shia militias from Syria despite the enormity of the crimes that they perpetrate against Syrians, crimes that put them on an equal footing with IS.

As for Yemen, it is true that there has been a decline in the statements that criticise Saudi Arabia and its allies, but no one knows so far what the Trump administration will offer in terms of assistance in order to inflict defeat on the rebels and put an end to the war.

Perhaps the coming few months will reveal an answer to these questions. However, what Turkey has discovered about the Trump adminstration's unambiguous stances - with the expansion into Syria by the PKK and the continued armed support for the Kurdish organisations - is not reassuring at all.

Overestimating Trump’s intentions and promises, or expecting a substantial change compared to Obama’s policies, may not lead to a happy ending. Obama had no problem with the Arabs bearing responsibility for their own defence. It is very likely that Trump will end up adopting the exact same policy, only raising the tone of rhetorical support for his allies in the Gulf.

Photo: US President Donald Trump makes his way to board Air Force One in Riyadh as he heads with the First Lady to Israel on 22 May 2017 (AFP)