Kieran Cooke
IS runs them, Russia and the Coalition bomb them, together wreaking havoc in Syria’s oil fields, exposing thousands to life-threatening pollution 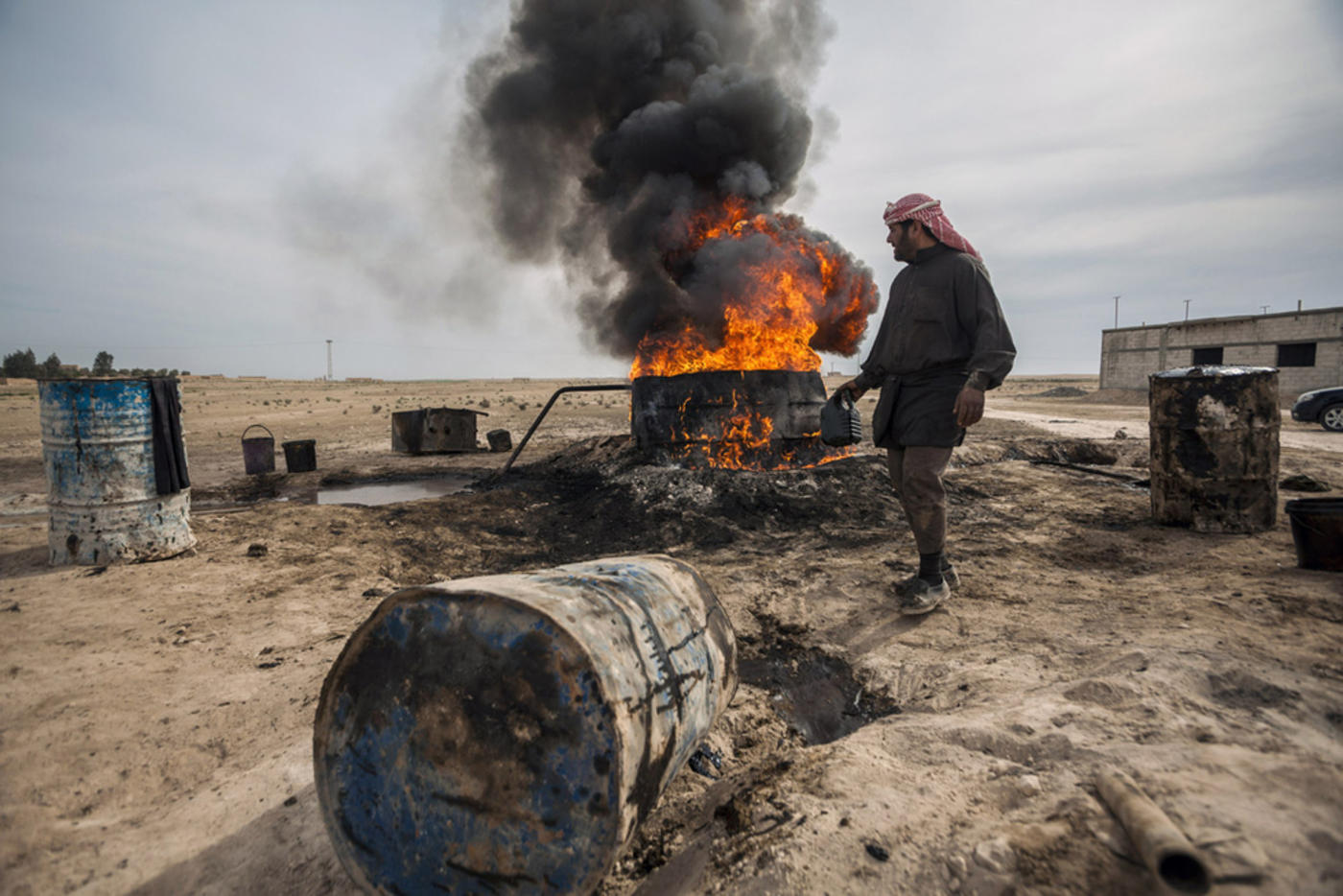 The satellite images tell the story: black, T-shaped marks littered across areas of the land in eastern Syria controlled by the Islamic State (IS).

On closer inspection, these are small, makeshift oil refineries – analysts have counted nearly 6,000 sites near Deir Ezzor, the main centre of Syria’s oil industry, and say there are thousands more spewing thick black smoke into the air located throughout IS territory – and in areas to the north now controlled by Kurdish forces.

Oil fires release a range of harmful substances into the air including lead, sulphur dioxide, nitrogen dioxide and carbon monoxide.

“Syria’s oil industry has been torn to pieces,” says David Butter, a Middle East expert at the Royal Institute of International Affairs in the UK.

“ISIS lacks the expertise to run the oil fields efficiently in areas it controls and it’s likely it’s caused a lot of damage to installations. Also many of these oil wells are exhausted, nearing the end of their production capacity – and then there’s the extensive damage caused by Coalition and Russian bombing.”

Pax, an interchurch organisation based in the Netherlands which focuses on conflict resolution around the world, recently published an extensive report on the environmental and health impacts of oil refining activities in both IS and Kurdish-held areas of Syria.

It says people working at these oil installations – many of them children orphaned by the war – are being increasingly exposed to a range of highly toxic compounds.

Oil fires release a range of harmful substances into the air including lead, sulphur dioxide, nitrogen dioxide and carbon monoxide.

“From exploding fuel barrels to carcinogenic chemicals and inhalational toxins, these makeshift oil refineries will have a long-lasting health impact on communities and their environment,” says the Pax report.

It is a dirty, dangerous business, with workers standing in the midst of dense clouds of toxic fumes

In earlier stages of the Syria conflict, rebel groups set up clusters of relatively basic refineries in areas under their control, often placing orders with steel works across the border in Turkey for various equipment. Grain silos and other facilities were also cannibalised for materials and parts.

The region’s tribes and clans, nursing long-held grievances with the Assad government over the exploitation of resources in the poorer eastern area of the country by the richer west, also set up refining businesses.

As Russian and Coalition bombing raids of oil facilities have intensified, oil processing in IS territory has become increasingly fragmented and more makeshift: IS has often made use of mobile, modular refineries to process crude. Recently, the number of micro-processing units has increased substantially.

The design and operation of these units is relatively simple, with crude oil heated in a barrel-type furnace to produce various oil products. It is a dirty, dangerous business, with workers standing in the midst of dense clouds of toxic fumes.

A report by UNICEF and the Save the Children charity have found that large numbers of children are working at such operations.

“Inside Syria, the involvement of children in hazardous labour is a particular concern in places like Deir-Ezzor governate in eastern Syria, where most out-of-school children were reported to work filtering crude oil and operating generators,” says the report, published last year.

'I hate the diesel market and the clothes that I wear there: all of it makes me sick.'

Often the work involves not only keeping the fire under a processing barrel alight, but also the more dangerous task of coating the inside of the tank with oil to maintain a high temperature.

Children are involved in other oil operations. The Save the Children/UNICEF report quotes Khalid, aged 12, who, after school, works at a market selling diesel.

“When the man selling the diesel gives it to the customer I stand next to him and soak up the diesel that has spilled on the ground with a sponge. I hate the diesel market and the clothes that I wear there: all of it makes me sick. One day some red spots appeared on my body and when I went to the doctor he said it was because of the diesel.”

Makeshift oil refining not only affects health but has a wider impact on the environment. Rivers and streams become contaminated: soot from oil fires makes land infertile. Livestock suffers and crops are reduced.

IS now controls about 60 percent of Syria’s oil production, most of it from areas formerly run by the Shell and Total oil conglomerates along the Euphrates Valley and near Deir Ezzor.

Earnings from an extensive smuggling operation involving hundreds of trucks transporting crude oil across the border into Turkey and to Kurdish-controlled areas of Iraq – and into areas controlled by Syrian government forces – have been a vital IS revenue source, estimated at one stage to have amounted to between $1mn and $3mn a day.

Both Russian and US-led coalition forces have made efforts to cut off that funding. To date Coalition forces, operating under Operation Inherent Resolve, say they have either destroyed or damaged more than 2,600 pieces of oil infrastructure since the bombing of oil regions started in late 2014.

There are also questions about the strategic value of bombing refineries: analysts point out that IS makes its money out of smuggling crude oil, not refined products

Concerns have been raised about the long-term impact of the bombardment both on the health of people in the region and on the environment.

The British military – part of the US-led coalition – highlighted the issue in a report to Parliament earlier this year.

“Military strikes against ISIL (ISIS) must always be balanced against the risk of undermining the ultimate capacity for post-war construction in the areas now controlled by ISIL, and the danger of worsening the conditions of the populations who now live under the group’s occupation.

“The targeting of ISIL’s oil industry must also consider the environmental impact, as well as the risk to civilians who are not necessarily adherents of ISIL who nevertheless work in the oil supply chain controlled by the group."

There are also questions about the strategic value of bombing refineries: analysts point out that IS makes its money out of smuggling crude oil, not refined products.

Speaking soon after the Coalition’s initial bombing raids, an analyst at the US-based Institute for the Study of War told the Washington Post that the air strikes on refineries were tactically spectacular but strategically insignificant.

There’s little doubt that ISIS - and its finances – has been hurt by the bombing raids. But the oil refining goes on, with toxic fumes and pollution creating serious health problems and potentially turning parts of the east of Syria into an environmental wasteland.

Photo: A Syrian man in the Al Raqqa countryside, who previously was a farmer, pouring crude oil brought from Deir Ezzor province into a pit where it will be distilled as part of the refining process to produce fuel. (AFP) Health
Apocalypse now: Iraqis choke as oil fields lit by IS are visible from space