Trump and torture: It won't give him the intelligence he wants 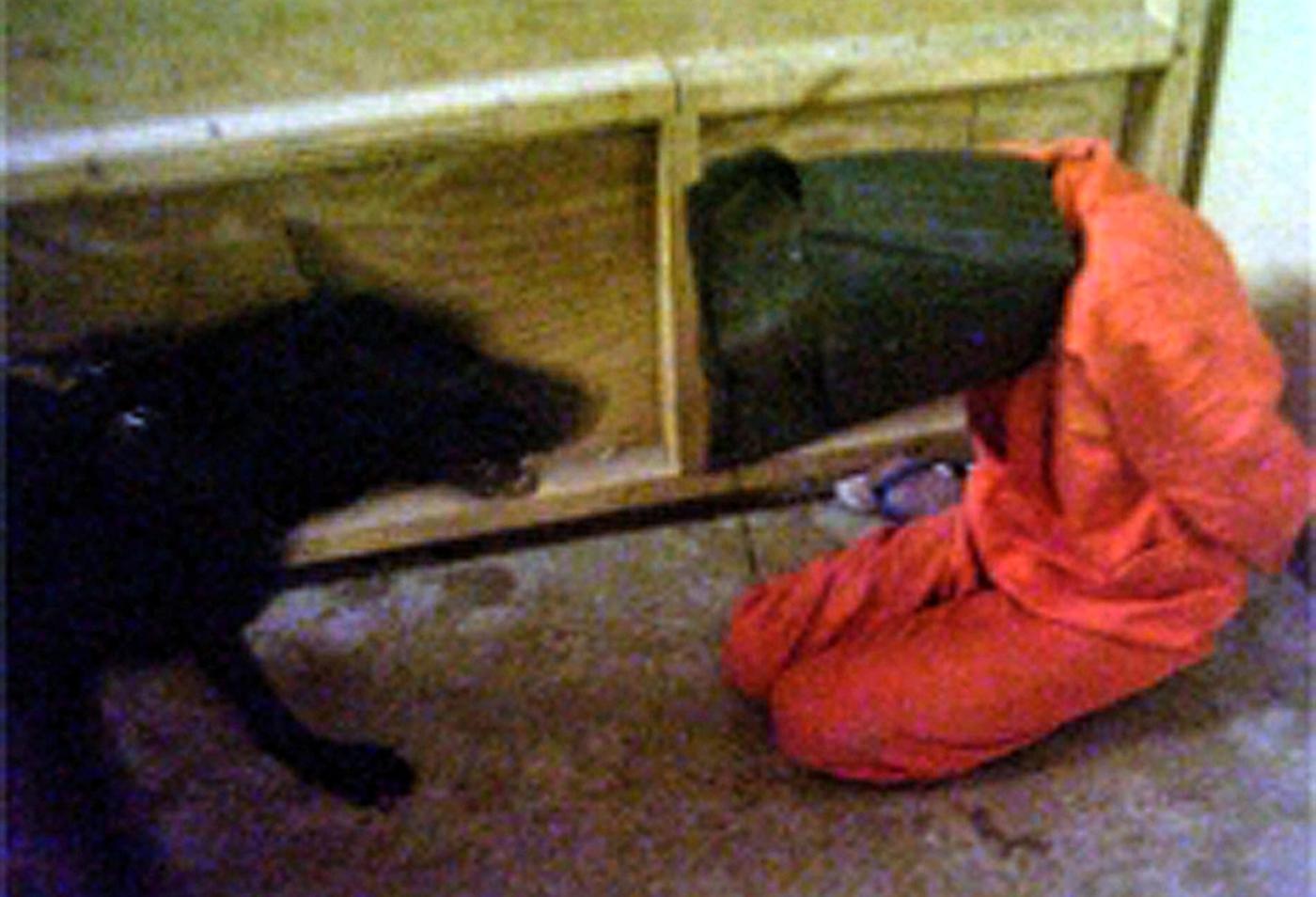 Wednesday was a day to warm the heart of every despot with a torture chamber in his basement. For the first time, a sitting president of the United States has proclaimed that “torture works”.

After the US press got hold of a draft executive order that would keep Guantánamo open, lift the ban on CIA black sites, and “disapply” the Geneva Conventions to prisoners of the “war on terror,” Donald Trump took to television again to set out his pro-torture stall: “Absolutely,” he said, “I feel [torture] works, we have to fight fire with fire.”

'Absolutely, I feel [torture] works, we have to fight fire with fire'

To dictators like Egypt’s Abdel Fattah al-Sisi, and men with designs to become one, like Libya’s Khalifa Haftar, this is sweet music indeed.

To them, it makes no difference whether Trump ultimately signs the executive order or whether, as he suggested, he defers to the views of his defence and intelligence staff. (Both Defence Secretary James Mattis, and CIA Director Mike Pompeo swore during confirmation hearings to oppose torture.)

Trump has sent them a signal: Do what you like to whomever you like, and the United States will look away.

How the US torture programme failed

We’ve been through this before. After 9/11, dictators across the Middle East immediately grasped how to win American dollars and acquiesce in their oppression: Tar your opponents as "terrorists". And much torture during the presidency of George W Bush was not carried out by the CIA itself – it was outsourced to these dictators and their torturers-in-chief. Former CIA officer Bob Baer put it trenchantly:

We can now expect a re-run of the tired old arguments about whether Trump is right, and torture “works”. On this, I side with people like Libyan-American Hend Army, who said that "'Does torture work?' as a question needs to be put in the bin with 'Is slavery commercially feasible?' and 'Can genocide help overpopulation?'"

But even a cursory quick glance at history shows that the last torture programme failed - and badly.

'Does torture work?' as a question needs to be put in the bin with 'Is slavery commercially feasible?' and 'Can genocide help overpopulation?'

The most infamous example is perhaps Ibn al-Sheikh al-Libi, one of the Bush administration’s earliest war-on-terror captives. After the White House decided that the FBI’s legal interrogations of al-Libi weren’t producing the goods fast enough, the CIA shipped him on a jet to Egypt.

There, under the tender ministrations of Egyptian torturers, he provided the “intelligence” that the Bush White House sought: that al-Qaeda and Saddam Hussein were in league, with Hussein offering to train al-Qaeda operatives to use “weapons of mass destruction”.

This was a lie. As often happens under torture, Al-Libi told the lie to stop his pain. The lie made its way into then secretary of state Colin Powell’s speech to the United Nations in defence of the Iraq invasion. It was a key plank of the US position.

Powell now describes this as the greatest “blot” on his career. Even Donald Trump agrees the Iraq war was a disaster. He either doesn’t know, or doesn’t care, that it was pushed through on bad intelligence gleaned from torture chambers.

What do Trump’s remarks foretell for the US? There is clearly some institutional resistance to turning back the clock on torture. And there are, as the draft order acknowledges, some statutory constraints in place. But the Army Field Manual has loopholes that could be stretched to allow worse abuses, and legislators have tried before to add secret annexes to the torture law.

Thus far, all Trump has achieved is to lower the tone. But tone matters when you speak from the world’s largest bully pulpit. It sends a signal to soldiers right down the line: If it works, then go on and take it out on that captive.

If Trump signs the executive order, the US will have slid halfway down into the Bush-era abyss. Years ago, the Senate Armed Services Committee reported that the crucial moments in greenlighting torture in the Bush years were the early executive orders “disapplying” the Geneva Conventions from prisoners captured in the war (see page 28, conclusions 1 and 13).

That sent a message to stressed and inexperienced rank-and-file military interrogators from Afghanistan to Guantánamo Bay: the gloves come off.

We saw the results in the photographs from Abu Ghraib and Afghanistan. In some cases torture escalated to murder. In Bagram, interrogators hung one innocent taxi driver, Dilawar, from the ceiling, and beat him so hard he bled to death from the inside. A coroner later assessed that his legs “had basically been pulpified”. Dilawar’s death was just one of several murders in the prison.

The problem for US allies

The resurgence of American torture will also cause major headaches for US allies. The news will be especially unwelcome to the UK prime minister, Theresa May, whose flight must have been over the Atlantic when the executive order leaked.

Pity the prime minister: She is so desperate to strike a post-Brexit deal to sell haggis to Texans that she has clung to her talking points, insisting in this morning’s papers that Britain and America will "lead together" again in a new era. Where she supposes Trump will lead the UK she does not say.

Serious legal trouble is in store for American allies. This doubt on torture poses real problems for the US-UK intelligence-sharing relationship

In standing next to Trump, she diminishes the dignity of Britain – just as MI6’s collusion with Bush-era torture damaged their standing, and national security, right up to the present day.

Serious legal trouble is in store for American allies. This doubt on torture poses real problems for the US-UK intelligence-sharing relationship – particularly between the two countries’ intelligence agencies, the NSA and GCHQ. This isn’t about what intelligence the UK can receive – it’s about what they are permitted to share when it may well lead, once more, to innocents being taped to stretchers and sent to torture.

The UK cannot lawfully share intelligence in these circumstances. No amount of intel, good or bad, wrung from a detainee would compensate for the loss of this intelligence relationship.

Going to 'the dark side'

Like Trump, former US vice president Dick Cheney once insisted America had to go “to the dark side” to defend itself. The results speak for themselves: a Middle East in flames and groups that are more virulent than those we set out to fight.

It is no accident that Islamic State stages its snuff films by dressing victims in the glowing orange of Guantánamo Bay. The message is clear: When the United States and its allies squander their moral authority, torture is just a normal part of warfare.

The Senate’s conclusion about the last chapter of torture was damning:

"The abuse of detainees in US custody cannot simply be attributed to the actions of a ‘few bad apples’ acting on their own. The fact is that senior officials in the United States government solicited information on how to use aggressive techniques, redefined the law to create the appearance of their legality, and authorized their use against detainees. Those efforts damaged our ability to collect accurate intelligence that could save lives, strengthened the hand of our enemies and compromised our moral authority."

Trump has set a course for a repeat of this dark past. The question is whether we as a society will do more to resist.

Cori Crider directed the Abuses in Counter-Terrorism team at the NGO Reprieve from 2009-16. As a lawyer she has represented Guantánamo prisoners, victims of "extraordinary rendition," and survivors of drone attacks. She still represents the Belhaj family, and writes as a freelance journalist on the excesses of the national security state. Her writing appears in the Guardian, Reuters, Al Jazeera, the Independent, CNN, Newsweek, and the New York Daily News.

Photo: A hooded and bound prisoner being attacked by a dog in Abu Ghraib jail supposedly during interrogation by US soldiers in Baghdad in 2004 (SBS/AFP)