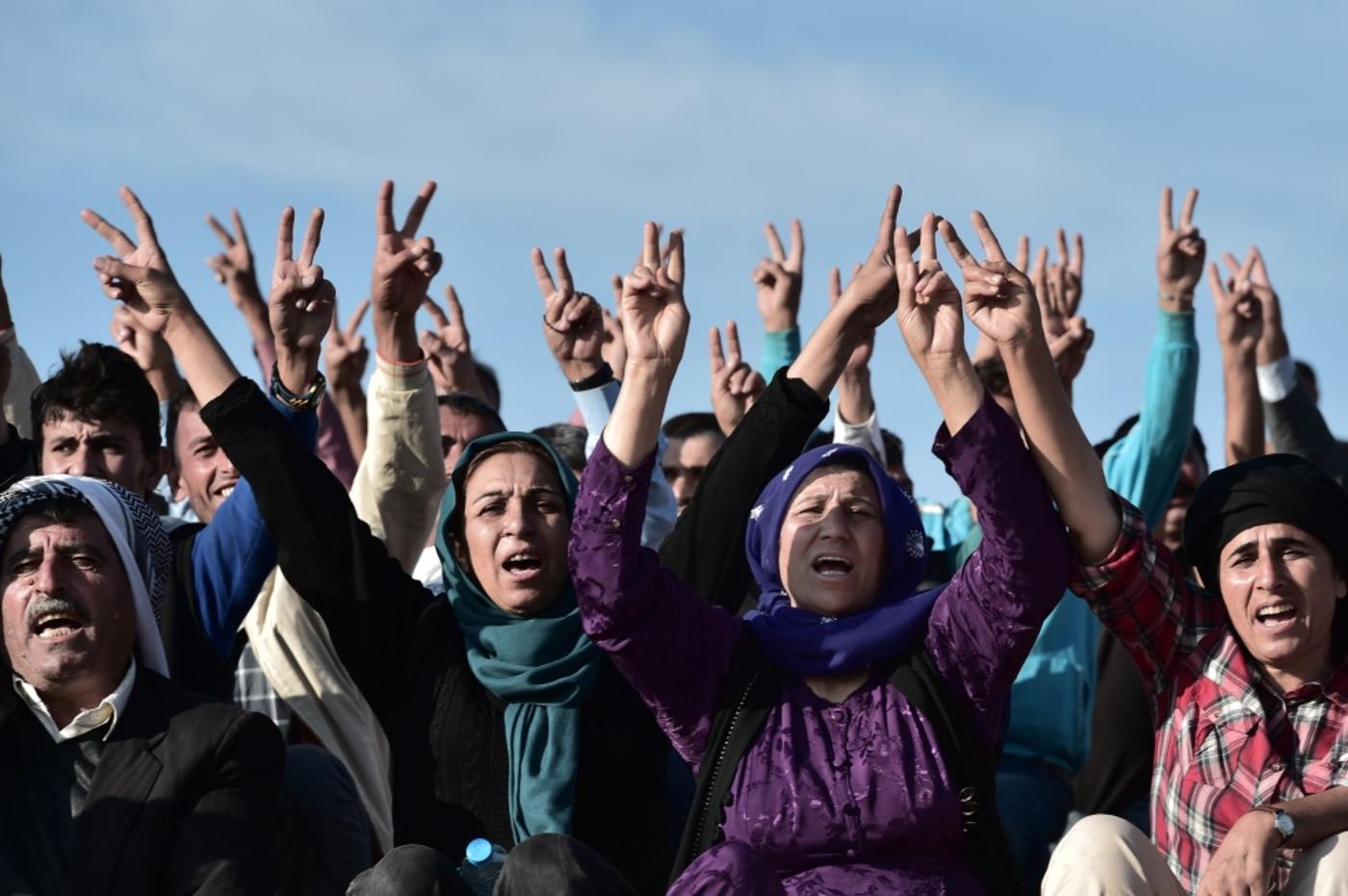 Turkey has come under the spotlight since the Islamic State (IS) began its assault on the Syrian Kurdish border town of Kobane. Ankara is being heavily criticised for not heeding calls from Kurds, the US, European states and the UN to intervene militarily amid warnings of an impending massacre should IS capture the town.

To a considerable extent, such criticisms are misplaced, and do not take into account Turkey's very delicate and difficult position with regard to the Syrian conflict. Until a few weeks ago, Ankara had been condemned for being too involved. Now it is coming under fire for not doing enough.

It can be faulted for its heavy-handed response to widespread demonstrations by Turkish Kurds against Ankara's inaction over Kobane. This has resulted in deaths and arrests, which have inflamed an already tense situation in Turkey whose Kurds constitute some 20% of the population. Also, Prime Minister Ahmet Davutoglu's pledge that "we'll do whatever we can to prevent" Kobane's fall has not helped by raising expectations that have not been met.

However, it is something of a misconception that Ankara has done nothing over Kobane. In the weeks since the start of the IS assault on the town, Turkey has taken in more than 180,000 Syrian Kurds. This is on top of the million-plus refugees already there.

That is far more than the total number of Syrian refugees that Europe has taken in during the 3.5 years since the conflict began - 124,000 as of July. As of April this year, the US had resettled a pitiful 121.

Turkey is being asked to enter Syria when no other government is prepared to do the same, for fear of the many potential repercussions of doing so. The dangers for Syria's neighbours are magnified.

Similarly, the UN's envoy to Syria, Staffan de Mistura, is urging Ankara to let "volunteers" cross the border to fight. This at a time when countries worldwide are ramping up efforts to stop the flow of would-be combatants to Syria, for fear of them returning home radicalised and battle-experienced. Apparently Turkey is not entitled to the same apprehensions.

Entering Syria to save Kobane would pit Ankara against IS, which has not only proven to be a formidable fighting force against numerous simultaneous opponents, but is also suspected of having sleeper cells in Turkey that could cause deadly havoc. IS has explicitly threatened all states that are involved in the campaigns against it.

Ankara may also become embroiled in fighting the Assad regime, which has warned Turkey of the "catastrophic consequences" of a cross-border incursion. This may lead to the involvement of the various foreign forces in Syria - Lebanese, Iranian and Iraqi, among others - that are propping up Assad.

Given all these very serious considerations, Turkish Foreign Minister Mevlut Cavusoglu is right to state that "it is not realistic to expect Turkey to conduct a ground operation on its own." Furthermore, NATO head Jens Stoltenberg has said the alliance is not considering Ankara's suggestions of a no-fly zone or a safe zone inside Syria.

In any case, Turkey is unlikely to act at the behest of a coalition that disagrees with Ankara on making the removal of Assad an explicit aim of the campaign. In the absence of such a goal, Turkey sees direct intervention against IS in Syria as playing into the very hands of a regime that Ankara wants to see the back of. This is a view widely held by Assad's opponents generally.

It is inaccurate to claim that Turkey's reluctance reflects an anti-Kurdish agenda. Ankara has not undertaken military action in aid of any particular community in Syria or Iraq, even its Turkmen ethnic kin, or its own citizens who were taken hostage by IS. Turkey is also an economic lifeline for Iraqi Kurds, with whom relations have flourished in recent years, and in whose economy it has invested heavily.

American officials have downplayed the strategic significance of Kobane to Washington's overall strategy, and the US has arrested PKK members trying to enter the country, yet no one is accusing it of being anti-Kurdish.

Even the response of Iraq's Kurdistan Regional Government to Syrian Kurds' call to arms has been lacking. Syrian Kurdish official Alan Othman said the KRG's supply of weapons was "no more than symbolic."

As such, the PKK's threat to end peace talks with Ankara and renew its 30-year-old insurgency if Kobane falls is a major miscalculation that could backfire on Turkey's Kurds. Ankara will not bow to such an ultimatum by an organisation designated as a terrorist group not just by Turkey, but also NATO, the European Union, the US and other countries.

A resumption of the revolt would hit Turkish Kurds the hardest. They comprised the majority of its 40,000 fatalities, and Ankara is far stronger militarily than the PKK whose attacks this week on a Turkish military outpost resulted in airstrikes against its positions. A full-blown resumption of hostilities may jeopardise the gains made by Turkish Kurds regarding their rights and status since the peace process began.

The PKK's threats and the Kurdish call to arms may well add to Ankara's existing wariness over Kurds' national and territorial ambitions, as well as increased cross-border military cooperation between their communities.

Turkey is opposed to Iraqi Kurds' upcoming referendum on independence. The vote will encompass the considerable territories they have captured since IS's advances in Iraq, including the hotly contested city of Kirkuk, whose Turkmen community has complained of Kurdish intimidation. The considerable Western arming of Iraqi Kurds to take on IS may strengthen their ability to fight off any challenge to their territorial gains or the referendum.

Also, Syria's Kurds have enjoyed de facto autonomy in the northeast since the revolution against Assad began. These gains in Iraq and Syria may embolden Turkish Kurds. As such, Ankara would not launch or take part in any military operation that may cement these gains or whip up Kurdish secessionist sentiments, whether in Turkey or its neighbours.

Ankara has agreed to help train and equip moderate Syrian opposition groups, who are fighting Assad as well as IS. However, to expect Turkey to risk its troops getting mired in Syria, in a campaign that may strengthen Assad as well as the Kurds, is to ignore Ankara's strategic considerations and national interest.

Photo: Kurdish people shout slogans while standing upon a hill opposite the Syrian town of Kobane in the southeastern village of Mursitpinar on 15 October (AFP) Islamic State
Fleeing Kobane: Only the things they could carry