Nafeez Ahmed
Landmark research proves that the US-led ‘war on terror’ has killed as many as 2 million people, but this is a fraction of Western responsibility for deaths in Iraq and Afghanistan over the last two decades 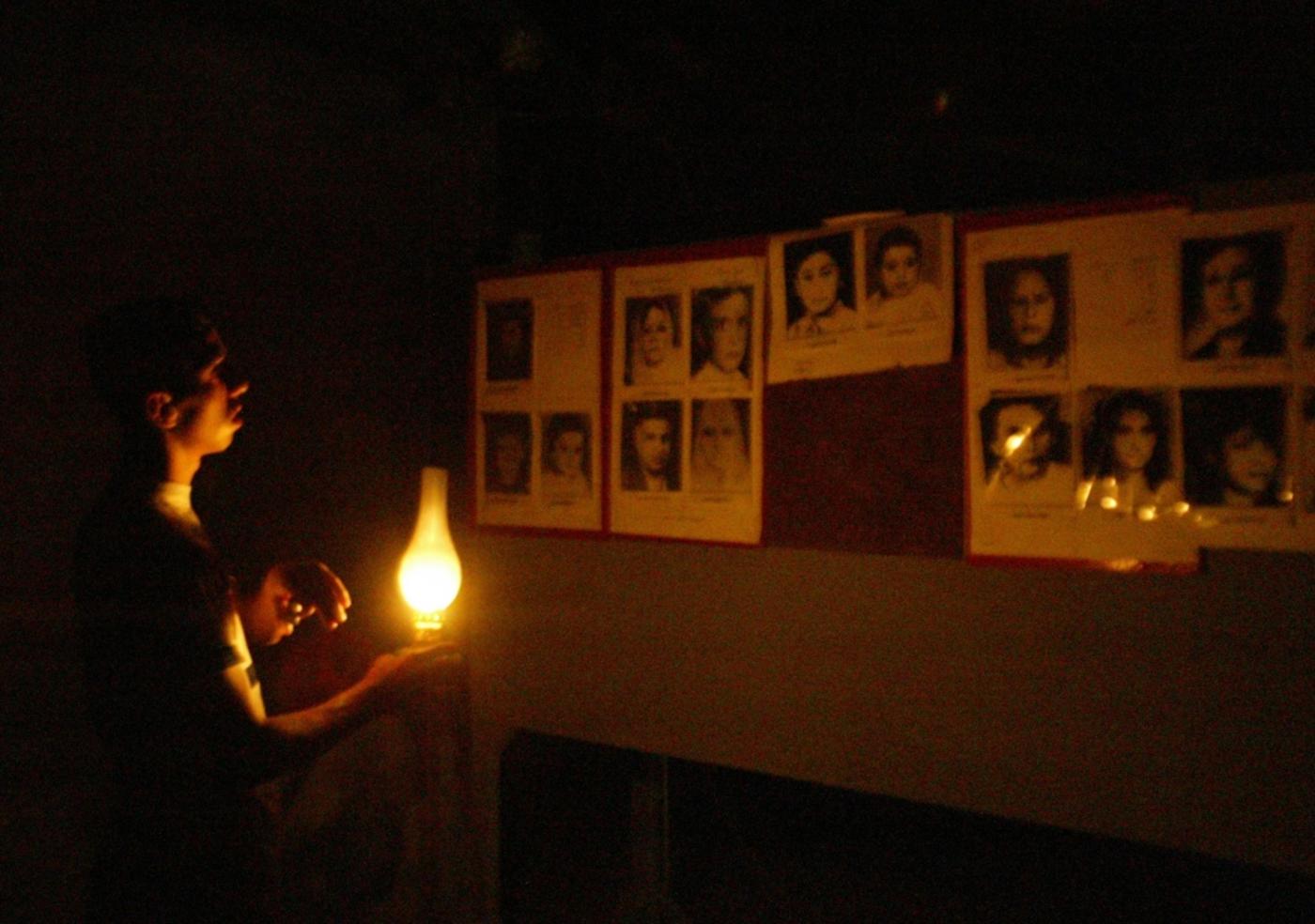 Last month, the Washington DC-based Physicians for Social Responsibility (PRS) released a landmark study concluding that the death toll from 10 years of the “War on Terror” since the 9/11 attacks is at least 1.3 million, and could be as high as 2 million.

The 97-page report by the Nobel Peace Prize-winning doctors’ group is the first to tally up the total number of civilian casualties from US-led counter-terrorism interventions in Iraq, Afghanistan and Pakistan.

The PSR report is authored by an interdisciplinary team of leading public health experts, including Dr. Robert Gould, director of health professional outreach and education at the University of California San Francisco Medical Center, and Professor Tim Takaro of the Faculty of Health Sciences at Simon Fraser University.

Yet it has been almost completely blacked out by the English-language media, despite being the first effort by a world-leading public health organisation to produce a scientifically robust calculation of the number of people killed by the US-UK-led “war on terror”.

The PSR report is described by Dr Hans von Sponeck, former UN assistant secretary-general, as “a significant contribution to narrowing the gap between reliable estimates of victims of war, especially civilians in Iraq, Afghanistan and Pakistan and tendentious, manipulated or even fraudulent accounts”.

The report conducts a critical review of previous death toll estimates of “war on terror” casualties. It is heavily critical of the figure most widely cited by mainstream media as authoritative, namely, the Iraq Body Count (IBC) estimate of 110,000 dead. That figure is derived from collating media reports of civilian killings, but the PSR report identifies serious gaps and methodological problems in this approach.

For instance, although 40,000 corpses had been buried in Najaf since the launch of the war, IBC recorded only 1,354 deaths in Najaf for the same period. That example shows how wide the gap is between IBC’s Najaf figure and the actual death toll – in this case, by a factor of over 30.

Such gaps are replete throughout IBC’s database. In another instance, IBC recorded just three airstrikes in a period in 2005, when the number of air attacks had in fact increased from 25 to 120 that year. Again, the gap here is by a factor of 40.

According to the PSR study, the much-disputed Lancet study that estimated 655,000 Iraq deaths up to 2006 (and over a million until today by extrapolation) was likely to be far more accurate than IBC’s figures. In fact, the report confirms a virtual consensus among epidemiologists on the reliability of the Lancet study.

Despite some legitimate criticisms, the statistical methodology it applied is the universally recognised standard to determine deaths from conflict zones, used by international agencies and governments.

PSR also reviewed the methodology and design of other studies showing a lower death toll, such as a paper in the New England Journal of Medicine, which had a range of serious limitations.

That paper ignored the areas subject to the heaviest violence, namely Baghdad, Anbar and Nineveh, relying on flawed IBC data to extrapolate for those regions. It also imposed “politically-motivated restrictions” on collection and analysis of the data - interviews were conducted by the Iraqi Ministry of Health, which was “totally dependent on the occupying power” and had refused to release data on Iraqi registered deaths under US pressure.

In particular, PSR assessed the claims of Michael Spaget, John Sloboda and others who questioned the Lancet study data collection methods as potentially fraudulent. All such claims, PSR found, were spurious.

The few “justified criticisms,” PSR concludes, “do not call into question the results of the Lancet studies as a whole. These figures still represent the best estimates that are currently available”. The Lancet findings are also corroborated by the data from a new study in PLOS Medicine, finding 500,000 Iraqi deaths from the war. Overall, PSR concludes that the most likely number for the civilian death toll in Iraq since 2003 to date is about 1 million.

To this, the PSR study adds at least 220,000 in Afghanistan and 80,000 in Pakistan, killed as the direct or indirect consequence of US-led war: a “conservative” total of 1.3 million. The real figure could easily be “in excess of 2 million”.

Yet even the PSR study suffers from limitations. Firstly, the post-9/11 “war on terror” was not new, but merely extended previous interventionist policies in Iraq and Afghanistan.

The war on Iraq did not begin in 2003, but in 1991 with the first Gulf War, which was followed by the UN sanctions regime.

An early PSR study by Beth Daponte, then a US government Census Bureau demographer, found that Iraq deaths caused by the direct and indirect impact of the first Gulf War amounted to around 200,000 Iraqis, mostly civilians. Meanwhile, her internal government study was suppressed.

After US-led forces pulled out, the war on Iraq continued in economic form through the US-UK imposed UN sanctions regime, on the pretext of denying Saddam Hussein the materials necessary to make weapons of mass destruction. Items banned from Iraq under this rationale included a vast number of items needed for everyday life.

Undisputed UN figures show that 1.7 million Iraqi civilians died due to the West’s brutal sanctions regime, half of whom were children.

The mass death was seemingly intended. Among items banned by the UN sanctions were chemicals and equipment essential for Iraq’s national water treatment system. A secret US Defence Intelligence Agency (DIA) document discovered by Professor Thomas Nagy of the School of Business at George Washington University amounted, he said, to “an early blueprint for genocide against the people of Iraq”.

In his paper for the Association of Genocide Scholars at the University of Manitoba, Professor Nagi explained that the DIA document revealed “minute details of a fully workable method to ‘fully degrade the water treatment system’ of an entire nation” over a period of a decade. The sanctions policy would create “the conditions for widespread disease, including full scale epidemics,” thus “liquidating a significant portion of the population of Iraq”.

This means that in Iraq alone, the US-led war from 1991 to 2003 killed 1.9 million Iraqis; then from 2003 onwards around 1 million: totalling just under 3 million Iraqis dead over two decades.

In Afghanistan, PSR’s estimate of overall casualties could also be very conservative. Six months after the 2001 bombing campaign, The Guardian’s Jonathan Steele revealed that anywhere between 1,300 and 8,000 Afghans were killed directly, and as many as a further 50,000 people died avoidably as an indirect result of the war.

In his book, Body Count: Global Avoidable Mortality Since 1950 (2007), Professor Gideon Polya applied the same methodology used by The Guardian to UN Population Division annual mortality data to calculate plausible figures for excess deaths. A retired biochemist at La Trobe University in Melbourne, Polya concludes that total avoidable Afghan deaths since 2001 under ongoing war and occupation-imposed deprivation amount to around 3 million people, about 900,000 of whom are infants under five.

Although Professor Polya’s findings are not published in an academic journal, his 2007 Body Count study has been recommended by California State University sociologist Professor Jacqueline Carrigan as “a data-rich profile of the global mortality situation” in a review published by the Routledge journal, Socialism and Democracy.

As with Iraq, US intervention in Afghanistan began long before 9/11 in the form of covert military, logistical and financial aid to the Taliban from around 1992 onwards. This US assistance propelled the Taliban’s violent conquest of nearly 90 percent of Afghan territory.

In a 2001 National Academy of Sciences report, Forced Migration and Mortality, leading epidemiologist Steven Hansch, a director of Relief International, noted that total excess mortality in Afghanistan due to the indirect impacts of war through the 1990s could be anywhere between 200,000 and 2 million. The Soviet Union, of course, also bore responsibility for its role in devastating civilian infrastructure, thus paving the way for these deaths.

Altogether, this suggests that the total Afghan death toll due to the direct and indirect impacts of US-led intervention since the early nineties until now could be as high 3-5 million.

According to the figures explored here, total deaths from Western interventions in Iraq and Afghanistan since the 1990s - from direct killings and the longer-term impact of war-imposed deprivation - likely constitute around 4 million (2 million in Iraq from 1991-2003, plus 2 million from the “war on terror”), and could be as high as 6-8 million people when accounting for higher avoidable death estimates in Afghanistan.

Such figures could well be too high, but will never know for sure. US and UK armed forces, as a matter of policy, refuse to keep track of the civilian death toll of military operations - they are an irrelevant inconvenience.

Due to the severe lack of data in Iraq, almost complete non-existence of records in Afghanistan, and the indifference of Western governments to civilian deaths, it is literally impossible to determine the true extent of loss of life.

In the absence of even the possibility of corroboration, these figures provide plausible estimates based on applying standard statistical methodology to the best, if scarce, evidence available. They give an indication of the scale of the destruction, if not the precise detail.

Much of this death has been justified in the context of fighting tyranny and terrorism. Yet thanks to the silence of the wider media, most people have no idea of the true scale of protracted terror wrought in their name by US and UK tyranny in Iraq and Afghanistan.

Photo: An Iraqi boy looks at pictures of victims of a US air raid in 1991 that killed 450 men, women and children sheltered in al-Ameriyah shelter in Baghdad, Iraq on 17 July 2003 (AFP) 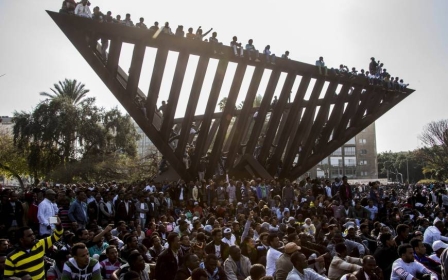 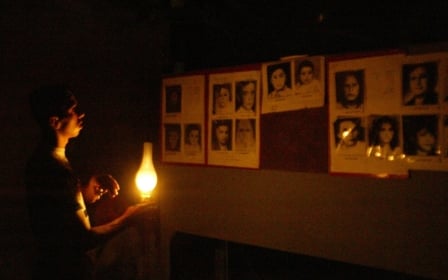