The US considers Gulen an 'exceptional' talent. He should be tried as a common terrorist

Taha Ozhan
Fettullah Gulen has used his years in the US to build a terror organisation crossing continents. It's time he answered for his crimes 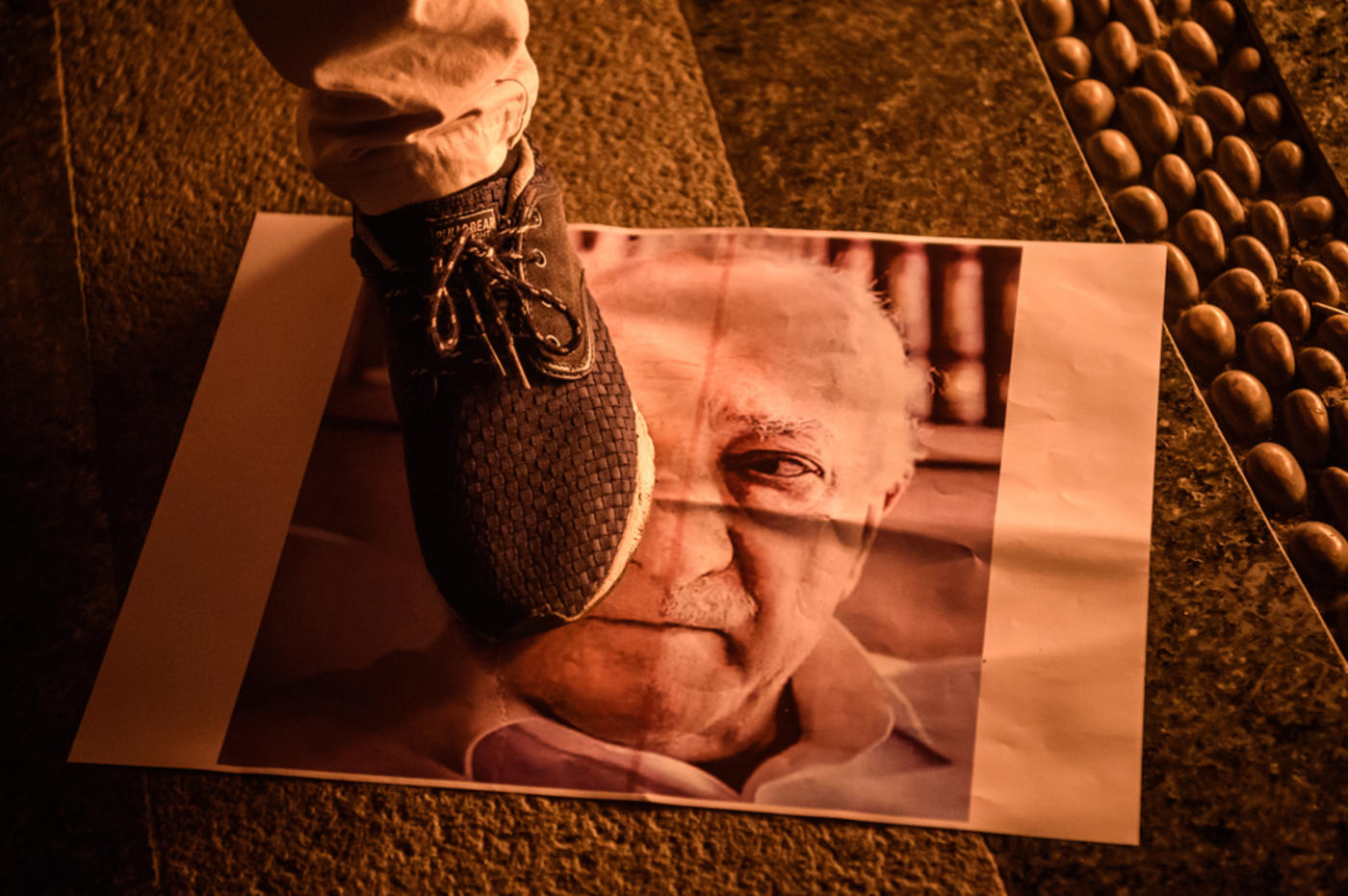 Fetullah Gulen, the mastermind of the July coup attempt in Turkey, acquired his permanent resident status in the US under the class of “alien of extraordinary ability” after a court decision in 2008.

It is a category of residence afforded to those who can demonstrate extraordinary ability in their academic field or chosen career.

Was the US decision prophetic? Following the July coup attempt, the saga of how Gulen and his bloody terror network have covertly operated over many years is now unravelling under this preferential status.

How Gulen works: a primer

Gulen has established an (il)legal global structure over the course of many years using his “extraordinary abilities,” doing so through both sophisticated and simple technologies. It was sophisticated because the network organised itself with the mentality of a covert intelligence network. But it was also quite primitive because it was motivated by one very simple enticement: it had an irresistible offer for everyone.

It is the sort of network which could go to the most underdeveloped and hunger-stricken countries of the world, which even UN aid could not properly access, and extend an inviting hand such as the luxurious offer of a private education.

No ordinary country could refuse such an offer. From the moment this offer is accepted, the Gulenist machinery would then kick in and begin its journey to its ultimate target.

In a matter of three to five years, the elites of these countries would enrol their own children in these private schools. The Gulenist machinery would present those children with opportunities from many different sectors not available from, nor affordable to, any other organisation.

But it would provide so much more to their parents. An army general in such a country, where the per capita income would be less than $1,000, would soon find himself sitting at the same dinner table as businessmen from the four corners of the earth while watching his child receiving a good education at home.

The political and business elites of that general’s country would now begin to be invited to private business trips to the capitals of the world, perhaps even begin to appear among the official entourage on visits to these cities. And the Gulenist network could make different types of approaches in different countries, for example, through the triumvirate of education, investment and global lobbyism.

The situation would not really be that much different in a country where the per capita income is above the $30,000 - 40,000 range. The Gulenists set their eyes on every individual who holds an elected post, approaching mayors in the smallest towns, as well as senators, the peoples’ representatives and governors and alike. The same simple offer would be made to all of them: let us voluntarily work with you for your campaign, and provide public relations liaisons for you for free, even donate considerable funds to your campaign.

The same goes for the offers of overseas conference tours made to journalists, academics and members of NGOs. Noone is bothered by nonsensical conference titles, noone asks any questions regarding those mass-produced “interesting Gulenists,” noone wishes to spoil those happy times by asking dirty questions.

If they were to ask any questions during an age when global Gulenist academic and journalistic tourism has reached its peak, then they would encounter a shield of impenetrable discourse about “tolerance, dialogue, harmony, interreligious friendship, fight against radicalism” and so on.

The situation in Turkey is similar to that of global Gulenism – but there is one very important, even deadly, difference. And that difference is exactly where Gulen’s ‘”extraordinary ability” tends to surface.

In Turkey, all of the Gulenist institutions and structures, which run into the tens of thousands, from business world, sports and education to the arts, NGOs and the media, have been organised as a buffer-zone to hide the movement’s armed wing, which consists of a Gulenist network of police, soldiers, prosecutors and judges.

Among the police, it included tens of thousands of adherents, a vast number of them in police intelligence. Subsequent to their acquisition of the police academies many years before, almost all of the police who graduated every year happened to be members of that network. From the late 1980s onwards, Gulenists began to infiltrate the police force and organisations, not by the hundreds but by the thousands.

The interior ministry declared that, at the beginning of 2014, out of the 7,000 members of the Police Intelligence Service, 6,500 were Gulenists.

Interior Minister Efkan Ala also stated that, during the same period, 74 of the 81 heads of provincial police directorates were members of the Gulenist network. But, he added, “all of them had been either purged or appointed to passive positions in 2014”. This explains why the police force was not supportive of the July coup attempt.

Rather, the military was the most covert and secretive segment of the Gulenist organisation. They began to infiltrate the armed forces quite secretively from 1971 and this increased considerably from 1984 onwards due to insider support.

The generals behind the July coup attempt would have to have entered the armed forces in the mid-1980s at the latest: a candidate who entered a military high school in 2000 would have progressed to the rank of lieutenant at best by 2016.

Despite persistent rumours, it is not possible to ascertain how far covert Gulenists penetrated the armed forces: that could only be determined by the unexpected behaviour, reluctance and unwillingness on the part of those involved, for example by their actions during the fight against the PKK or the terrorism resulting from the Syrian crisis.

By the end of 2015, the Gulenist structure within the armed forces began to expose itself: had it not been for the coup attempt, then the acknowledged Gulenist members of the armed forces would have been purged by the military high council meeting, which each August decides promotions, appointments and retirements within the services.

How the judiciary became a tool of Gulenism

The judiciary was another of the most important weapons of Gulenist terrorism, with penetration beginning before the Erdogan governments came to power.

The Gulenists, who formed a judicial army of thousands of prosecutors and judges, began their terrorism many years ago, intensifying it after 2008. Soldiers, officers, journalists, civilians and politicians of all political persuasions have found themselves in front of Gulenist judges thanks to the frame-ups and conspiracies of Gulenist prosecutors.

The machinery was simple: police intelligence would manufacture evidence, prosecutors would file submissions to court based on unimaginable scenarios and accusations, and the judges would then issue verdicts on previously unheard of grounds.

Meanwhile, Gulenist police intelligence teams and prosecutors would receive unopposed permission from Gulenist judges at courts for the illegal wiretapping and eavesdropping of private citizens.

In such a way hundreds of thousands of citizens including businessmen, journalists and politicians have been recorded, then threatened and blackmailed to the benefit of the Gulenist movement.

Even this author’s phone conversations have been recorded for years without the necessary judicial ruling.

Since 2007, hundreds of high-ranking soldiers and officers – including a head of the joint chiefs of staff - have been imprisoned.

An attempt was made to jail the head of the National Intelligence Organisation (MIT).

The former president of the main opposition party, the CHP, who would not step down for many years, was ousted by the scandalous revelation of videotapes about his private life.

On 17 December 2013, there was an attempt to overthrow the government through entirely fabricated allegations of corruption levelled against the government.

There is now a national consensus that FETO is, and was, behind all of these developments.

The only difference now compared with before the July coup is that the Gulenist network has added the army to its devil’s triangle of police, prosecution and judiciary.

Now is the time for the US to extradite that "extraordinary alien" back to Turkey as an ordinary terrorist on the basis of the agreement signed between the US and Turkey back in 1981, as well as for the heavy crimes for which he is responsible.

Do Americans doubt whether Gulen was behind the July coup attempt?

Then they should understand this: that bloody terrorist act, which was backed by thousands of sympathetic police military and bureaucrats adherents, was orchestrated by Gulen, a man who resides in a small town in America – just like the 9/11 attack on the US was committed by Osama Bin Laden, who at the time resided in a far-away cave in Afghanistan.

- Taha Ozhan is a member of Turkish Parliament and chairman of Foreign Affairs Committee. He is an academic and writer. Ozhan holds a PhD on Politics and International Relations. He frequently comments and writes for international media. His latest book, Turkey and the crisis of Sykes-Picot Order (2015).

Photo: A man walks on a poster of Fethullah Gulen during a rally at Taksim square, Istanbul, following the failed coup of 15 July (AFP)