'We are more tired than afraid': Finding strength amid darkness in Gaza 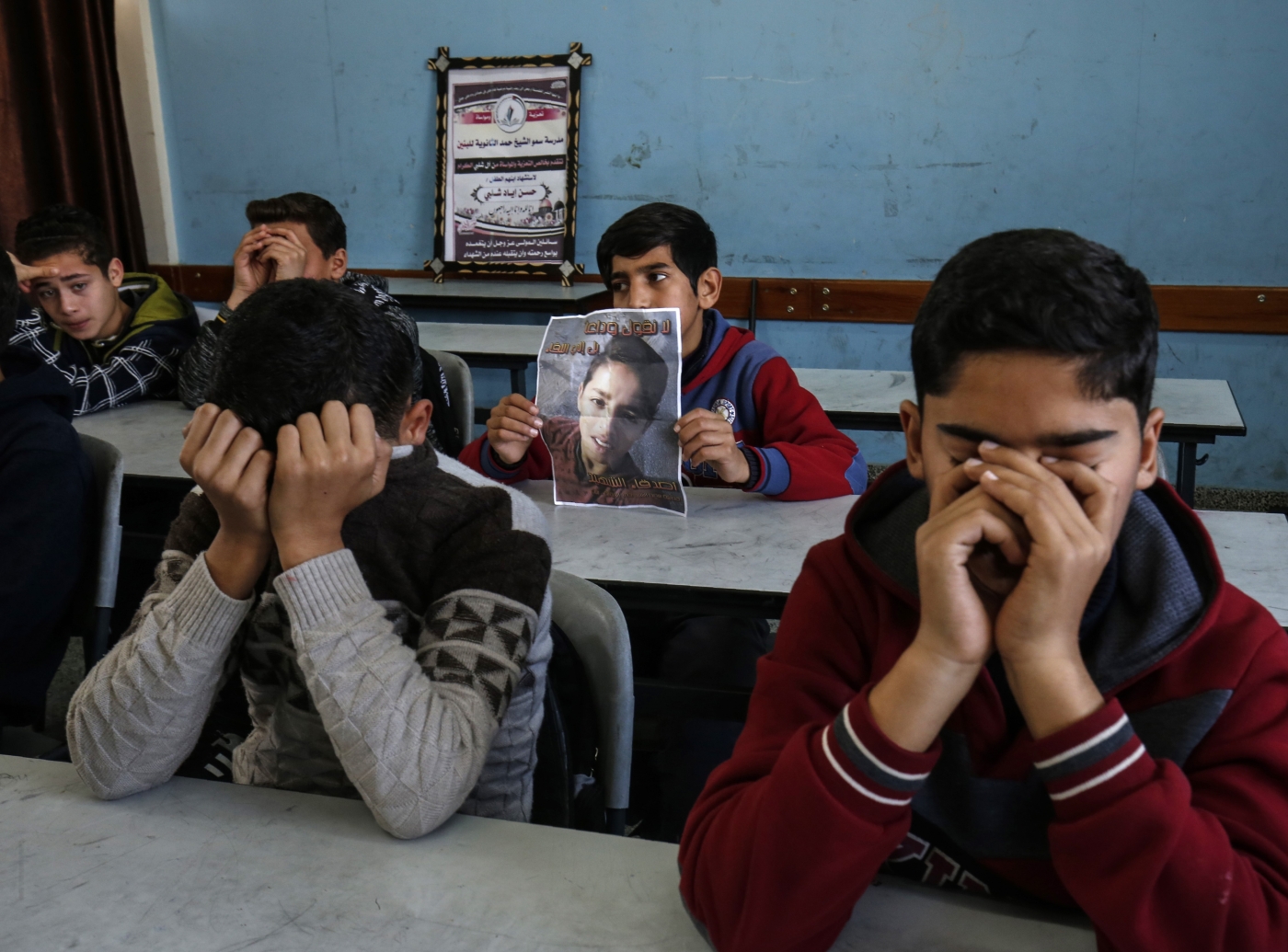 Classmates of Hassan Shalabi, 14, mourn his death at his school in Khan Younis in the southern Gaza Strip, on 9 February (AFP)

“Here on the slopes of hills, facing the dusk and the cannon of time, close to the gardens of broken shadows, we do what prisoners do and what the jobless do: We cultivate hope,” poet Mahmoud Darwish once wrote.

Living in a neglected part of the world - Palestine is not completely forgotten, but recognised as something else - we struggle to bring the truth into the spotlight.

We fight every day to recollect the scattered pieces of who we are, hoping to secure a better today, tomorrow and forever for ourselves and for the generation to come.

Fearing the next onslaught

In the Gaza Strip, Palestinians suffer continuous agony. One of the most crowded places in the world, the 360-square-kilometre territory is home to more than two million people who have been living under an Israeli-imposed siege for more than a decade, harming every aspect of their lives.

This misery has been compounded by Israel’s repeated, brutal assaults. The last one came just a few weeks ago, after rockets fired from Gaza hit a house in central Israel. Upon seeing photographs of the destroyed home, Palestinians in Gaza feared that Israel’s next onslaught was imminent.

The continuing state of misery, of an unknown and unsecured future, hopeless and grey, has emptied us of our positive energy

When I heard the news, however, I was not as afraid as I usually would be in such a situation. I think many others felt the same way: we are more tired than afraid. We are frustrated and depressed. The continuing state of misery, of an unknown and unsecured future, hopeless and grey, has emptied us of our positive energy.

Palestinians in Gaza are always expecting the worst to come; always tense, feeling defeated and shackled, trapped and drained. They feel paralysed, as though there is nothing they can do to change their reality.

This is why so many have poured to the Gaza fence each week to protest against the occupiers. They have nothing to lose, so they approach the fence, perhaps not even realising how close they are to the Israeli forces who have gone to that same fence with a totally different motive.

A year ago, I lost my strongest reason for going on with this life: my beloved father, my backbone. He was a talented psychologist who had worked in the field for close to three decades. He devoted his life to alleviating the burden of the people of Gaza, even as he carried the same burden.

During the last three years of his life, he established a centre to provide psychological support, focusing especially on students, teachers and parents. This was born from his strong belief that schools are the nucleus of childhood development.

I used to go with him on school visits, meeting students who suffered from psychological disorders. For children, the threat of conflict, the fear of bombs, and the constant insecurity caused by Gaza’s unstable political situation were the biggest source of stress, with many caregivers saying it had taken a significant toll.

Aircraft sounds in the darkness at night, when the electricity was off, were cited as the biggest source of fear. I was shocked by the number of students with psychological disorders. Their parents felt helpless, watching their children suffering in front of their eyes, but unable to fix it. Israel's siege of Gaza: When does it become a genocide?
Read More »

During each treatment, I saw the fatigue in my father’s eyes upon hearing the stories of children victimised by the war or siege. “I believe that all the psychology in this world would not be able to heal those children,” he sometimes said. “It can help them to go on with their life, but not like any normal human being.”

Gaza today faces two choices: a quick death under the rubble of the occupation’s bombs, or a slow death amid the years-long siege. In this situation, we derive our strength from Allah, and from our beloved family members, true friends, and the warm moments and memories we share with them. They are the ones who make life count.