Weapons to Syria, journalists to jail: The story behind Turkey’s great espionage trial

Alev Yaman
If a prominent journalist like Can Dundar can be sent to jail and dubbed a terrorist and a spy for practising journalism, can anyone be safe? 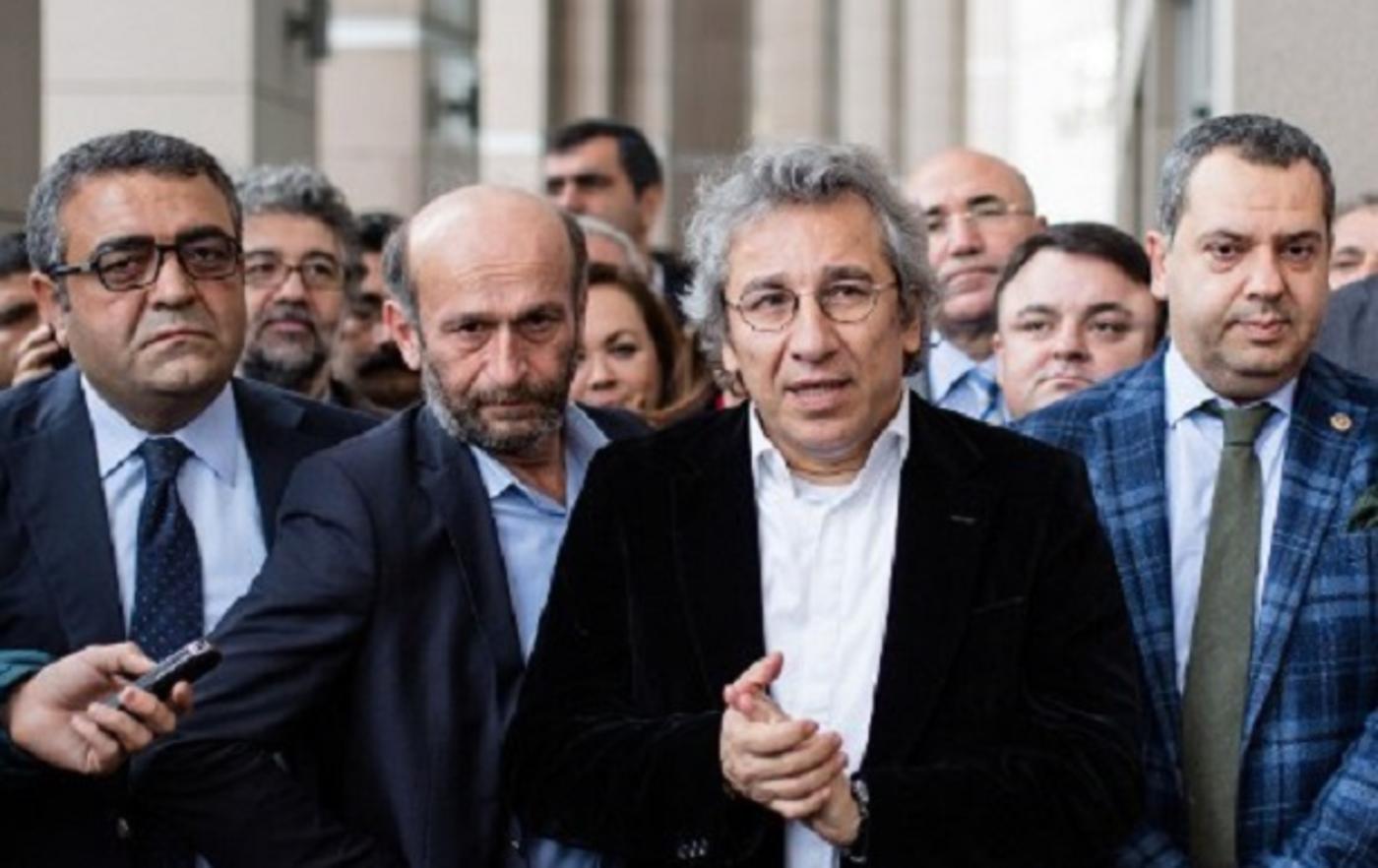 On 29 May 2015, the Turkish daily Cumhuriyet uploaded a video on its website showing the search by gendarmerie officials of a truck loaded with heavy weaponry allegedly bound for the Syrian border.

The truck, the newspaper claimed, belonged to Turkey’s national intelligence agency, MIT. For Can Dundar, the editor-in-chief of Cumhuriyet, the implications of the video were clear.

To him, they corroborated reports that had been emerging from the Syrian border for some time: that the Turkish state was directly arming jihadist groups in Syria. For the critics of Turkey’s government this was the biggest indication yet that their claims, that Turkey was playing a dirty game in Syria, might well be true.

The Cumhuriyet story was a PR disaster for a Turkish government that has increasingly found itself on the wrong side of international public opinion over its policies in Syria.

What has followed has been an unmitigated campaign of intimidation and judicial retribution against the journalists involved in covering the story; punishing them for Turkey’s loss of face on the international stage.

Cumhuriyet’s editor-in-chief Can Dundar and its Ankara correspondent Erdem Gul have been in and out of court since the story was published and the duo was sent to Silivri Prison on Thursday night pending the outcome of their trial. The pair have variously been charged with revealing state secrets, "political and military espionage" and "propaganda for a terror organisation". It could be years before the court delivers a verdict on their case. They face life in prison if found guilty.

In many ways, the Cumhuriyet espionage trial is a manifestation of a very bitter public feud between two very popular figures in Turkey and the segments of society that they represent. Can Dundar is the darling of Turkey’s secular left while Erdogan is the indomitable strongman of Turkey’s conservative heartland. They represent two diametrically opposed poles in a country increasingly divided over the policies of Erdogan’s Justice and Development Party (AKP) government.

Dundar has had no qualms about confronting Erdogan in his articles, variously describing him as corrupt, despotic and tyrannical.

He has written that Erdogan will one day be put on trial in an article that takes pride of place in a list of pieces that have prompted defamation suits from Turkey’s litigious president.

Days after Dundar published his story about the Syria-bound trucks, Erdogan delivered a rambling diatribe against Cumhuriyet on state television, accusing the newspaper and Dundar of complicity in a conspiracy to smear Turkey’s reputation.

According to Erdogan, this plot was orchestrated by Gulenist forces and a shady international cabal dubbed the Üst Akıl or "Mastermind". Erdogan was unequivocal about the ramifications of this perceived treachery:

“This unlawful operation and the lies levelled against the national intelligence agency constitute an act of espionage… The person who reported this story and the person who published it as an exclusive are going to pay a heavy price for this.”

Ignoring the arms on display in the video, Erdogan maintained that the trucks were carrying humanitarian aid to Syria’s Turkmens, playing on the nationalist sympathies of the Turkish public.

When Turkey shot down a Russian warplane earlier this week, Erdogan reiterated this claim, and again made reference to Cumhuriyet’s coverage of the trucks, describing it as treason – a reaction that may well have been prompted by Russian President Vladimir Putin’s accusation that Turkey was “an accomplice of terrorists”. Two days later, Dundar and Gul were placed in Silvri prison. The case against them was initiated by Erdogan’s personal lawyers.

Silivri Prison has played host to some of Turkey’s most significant political prisoners in recent years.. The largest penal facility in Europe, its 10,000 inmates include many of the accused in the Ergenekon trial, an anti-terror investigation once lauded by the AKP for breaking the military’s grip over Turkish politics but now derided - with some justification - by the same party as a miscarriage of justice perpetrated by the Gulen movement.

Ergenekon trial suspects, including UNESCO Press Freedom Award-winning journalist Ahmet Sik and investigative journalist Nedim Sener, have been imprisoned there despite no evidence of them being involved in terrorism or the plotting of violent acts.

Dundar and Gul’s protestations that the Turkish public has a right to know if their state is arming foreign groups, and that it is the media’s freedom and duty to report this, have been ignored. Such public interest arguments have been rebuffed by the public prosecutor’s office, which has bizarrely stated that the case “has nothing to do with press freedom”.

As is evinced by the recent history of journalists being imprisoned in Silivri Prison, press freedom has been under threat in Turkey for quite some time now.

Over the past few months, members of the media have been subjected to physical attacks, newspapers offices have been stoned by mobs led by AKP politicians, and media groups have been removed from the air or seized by the government in dubious circumstances.

In the run up to the November general election, Turkey’s state broadcaster TRT set aside over 90 percent of its political coverage to Erdogan and the AKP. It is by now a well-worn cliche that Turkey routinely ranks as one of the world’s top jailers of journalists and often lies near the bottom of press freedom indexes.

Yet for many, the jailing of Can Dundar – one of the most prominent journalists in Turkey – says something new. There is now a sense that anyone, no matter how mainstream or well-known, is vulnerable in Erdogan’s “new Turkey”.

If someone like Can Dundar can be sent to Silivri and dubbed a terrorist and a spy for engaging in journalism, can anyone really claim to be safe? The chill effect at play in Turkish journalism just got a lot stronger.

- Alev Yaman is a writer and human rights activist based in London and Istanbul. She has worked as a researcher and consultant for a number of organisations specialising in freedom of expression, including Article 19, English PEN and PEN International. Her articles have appeared in the Dissident Blog, Al Jazeera, the Fair Observer and Bianet.

Photo: A handout picture released by Turkey's Cumhuriyet daily shows Cumhuriyet editor-in-chief Can Dundar (C) speaking to the press before attending a hearing in Istanbul on 26 November 2015. (AFP).