Richard Silverstein
There may be little pressure put on Trump over Iran and Israel, but a new generation of left-wing candidates provides hope 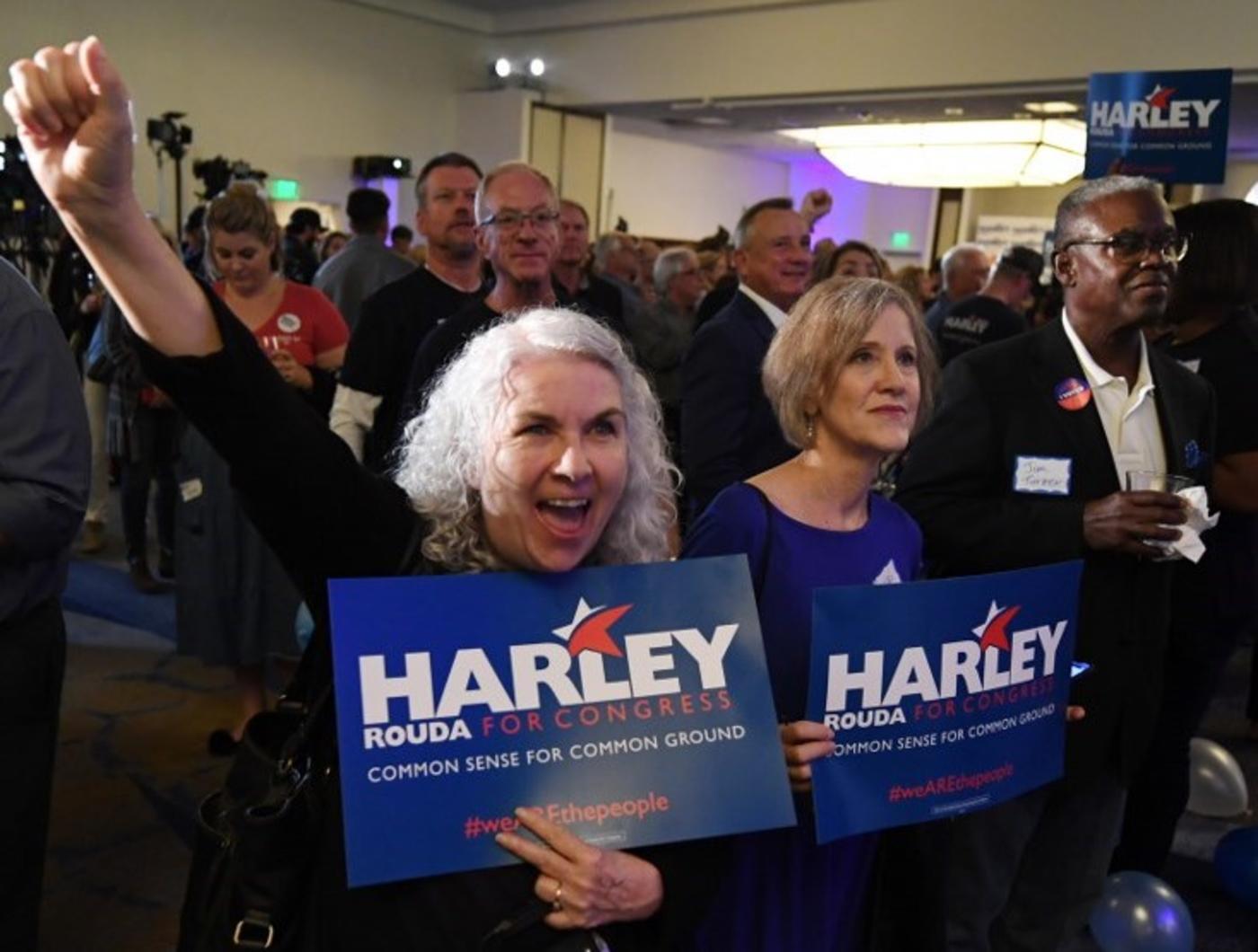 This week's US mid-term elections promised what the media called a "blue wave" of support for Democratic candidates at state and federal levels. In the end, the Republicans held onto the Senate, but Democrats regained a majority in the House of Representatives for the first time in a decade.

The blue wave was more gentle Mediterranean than wild Atlantic. Democrats gained nearly 30 seats in the House (too-close-to-call races may add up to seven more seats), the biggest gain in a mid-term election since 1974, but lost seats in the Senate.

It’s highly unusual for the opposition party to lose such seats in an off-year election. Democrats did pick up seven governorships from Republicans, but they appear to have lost in several key states, including Ohio, Florida and Georgia, which Democrats believed they had a good chance of winning.

Political pundits note that the new Democratic majority in the House has subpoena power to investigate the president and federal agencies. It can demand documents hitherto withheld in connivance with the former GOP majority. It can, for example, demand President Donald Trump's tax returns, which will shed greater light on his wealth and how it was earned. The Democrats will have expanded power to investigate the Russian role in the 2016 presidential election.

Further, they will be able to frustrate Trump’s legislative agenda. One can expect no further attempts to dismantle Obamacare. Attempts by the administration to weaken environmental law, abortion rights, and corporate oversight will be fought much more intensively and effectively.

Then there's foreign policy. Will a Democrat-controlled House make a difference, particularly in relation to the Middle East?

Clearly, the Democrats will be eager to probe Russia's sabotaging of the last presidential election and Trump's real estate dealings with Russian oligarchs

Clearly, the Democrats will be eager to probe Russia’s sabotaging of the last presidential election and Trump’s real estate dealings with oligarchs in Russia and Central Asia. One can expect that the House majority will put up a major stop sign blocking any Trump attempt to improve relations with Russia and its autocratic leader, Vladimir Putin. Sanctions against him and his cronies will remain in place.

A new approach to the Middle East?

In the Middle East, a new Congressional majority will likely not diverge a great deal from the policies Trump has pursued.

Ever since the 1979 US embassy takeover in Iran, Congress has shown great antipathy for Iran. The only reason the Iran nuclear deal was completed was that former president Barack Obama made it a centrepiece of his foreign policy. As soon as Trump could undo it, he did.

There is no stomach, even in a new majority Democratic House caucus, to deter the president from his punitive approach toward Tehran. Democrats, as much as Republicans, support the new sanctions that Trump recently imposed. Though House Democrats did not support Trump’s move of the US embassy to Jerusalem, nor his recognition of that city as Israel’s capital, there will hardly be any pressure to undo this highly provocative decision.

The Israel lobby continues to exert heavy influence on US policy and few Democrats will be willing to cross it, despite any sympathies they might harbour for the Palestinian cause. That being said, it’s important to note that the trend among Democrats overall shows a decline in support for Israel, fuelled in large part by the Likud government’s embrace of the Republican Party and Christian evangelicals.

There is no stomach, even in a new majority Democratic House caucus, to deter the president from his punitive approach toward Tehran. Democrats, as much as Republicans, support the new sanctions the President recently imposed

For example, after the lobby introduced legislation that would punish those who support the BDS movement, there was strong pushback from free speech advocates like the ACLU and among Democrats themselves. AIPAC continues to push the bill forward and it remains possible it will be approved. But its success is by no means certain.

They join Alexandria Ocasio-Cortez, another progressive who took a seat from a white, former leader of the New York City Democratic machine. All three have explicitly criticised Israel before they ran for office and during their campaigns. In fact, J Street, the liberal pro-Israel group, rescinded its endorsement of Rashida Tlaib after she refused to endorse the two-state solution.

Candidates like Omar, Tlaib, and Ocasio-Cortez - young women of colour who ran and won as staunch progressives or even socialists - are being held up as personifications of the future of the Democratic base. That may also be true when it comes to the Democratic Party’s slowly shifting stance on Israel, a shift that is likely to create some tension when the incoming class of progressives meets the more moderate old-timers on the Hill.

Such views are anathema to the Israel lobby. In the past, any Congress member who mouthed anti-Israel criticism was met with a well-funded election challenger who defeated them.

Though the lobby’s influence remains strong, there are demographic forces which it may be unable to stop. Add to that, Israel’s increasing lapse into authoritarianism and ethnic cleansing against Palestinians, and you may have an unrelenting turn away from past bi-partisanship on this issue.

No one should expect the power of the lobby to evaporate overnight. It will not fall as the Berlin Wall did in 1989. But just as the process of the decline of the Soviet Union proceeded slowly over many years, so too will the lobby’s power gradually fade over time.

Slate described this developing process: "A Pew poll released in January found that the share of Democrats sympathising with Israel more than the Palestinians has fallen from 38 percent to 27 percent since 2001." An Economist/YouGov poll last month found that, as Haaretz put it, American “support for Israel is… strongest among older, well-to-do, conservative white men and weakest among young, liberal, minorities and women."

Only 25 percent of 18 to 29-year-olds see Israel as an ally, just 29 percent of women, and only 19 percent of African Americans.

In other words, as the ageing leadership of lobbying groups like AIPAC, The Israel Project and American Jewish Committee retires from the scene, there will be fewer younger Jews stepping up to take their place. Instead, American Jewish youth will be turning away from pro-Israel activism altogether to take up more secular causes like the arts, culture and environmentalism.

Speaking up for Palestine

The 2020 presidential election should test this theory further. During the 2016 Democratic primaries, Bernie Sanders projected the most outspoken views on Israel-Palestine ever voiced by a Democratic candidate.

Though they were by no means radical to many in the activist community, they were far stronger than anyone in that position had previously voiced. Sanders' candour may and should embolden others to speak out in the upcoming presidential race, championing Palestinian rights and condemning Israeli oppression.

You will always have candidates like New Jersey senator Cory Booker, who are bought and sold by the lobby, who mouth all the platitudes fed to them by their pro-Israel donors. But Sanders, along with this new generation of populist grassroots candidates, promises major changes to come in the rhetoric around Palestine.

Photo: Supporters of the Democratic party during the mid-term elections (AFP). US Politics
US Midterms: Far-right candidates reelected, neo-Nazi gets 56,000 votes 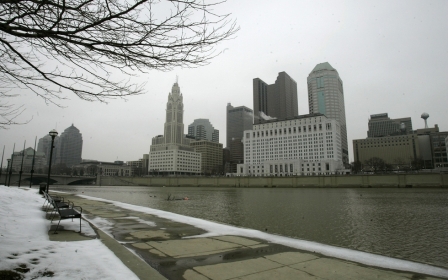