Nena Beecham
Amid crackdown on federal anti-racism programmes, the Trump administration is attempting to obscure the definition of patriotism On 4 September, the Trump administration announced its intention to crack down on federal anti-racism training programmes, calling them “divisive, anti-American propaganda”.

At the direction of President Donald Trump, Russell Vought, head of the Office of Management and Budget, directed federal agencies to identify spending related to training on “critical race theory” and “white privilege”. In follow-up tweets citing Breitbart, Trump called the programmes “a sickness that cannot be allowed to continue”.

The ban was quickly met with opposition. The deans of UCLA released a joint statement on the value of critical race theory, writing that it “invites us to confront with unflinching honesty how race has operated in our history and our present, and to recognize the deep and ongoing operation of ‘structural racism,’ through which racial inequality is reproduced within our economic, political, and educational systems even without individual racist intent”.

Ibram X Kendi, author of How to Be an Antiracist and director of the Boston University Center for Antiracist Research, also rejected the ban, noting: “To say antiracism is anti-American is to say racism is American, which is to say Trump wants white Americans to be racist.”

A call to revisit history

The ban is part of an ongoing effort by the Trump administration to obscure the effects of racism in American society. Movements for civil rights and racial justice have rarely been welcomed with open arms in the history of the US. Through its attacks on federal anti-racism programmes, Black Lives Matter and the 1619 Project, the Trump administration not only continues a long history of disregarding calls for racial justice, but attempts to define “Americanness” as a willingness to obscure the history of racism in the US.

Like the federal anti-racism programmes, efforts to educate and start discussions on racism have been met with contempt by Trump and his supporters. Two days after announcing the ban, Trump threatened to withdraw federal funding from California schools that teach aspects of the 1619 Project. The Pulitzer Prize-winning project, which “aims to reframe the country’s history by placing the consequences of slavery and the contributions of black Americans at the very center of our national narrative”, was launched in August 2019 on the 400th anniversary of the start of American slavery.

Since its release, the project has been decried as a false view of US history and an offence to the nation’s founding fathers. Trump labeled it a “racism witch hunt”. Secretary of State Mike Pompeo disparaged the project as “a dark vision of America’s birth” and “a slander on our great people”. Senator Tom Cotton defended slavery as “the necessary evil upon which the union was built”, and even went so far as to introduce the Saving American History Act of 2020 to prohibit the use of federal funds to teach the curriculum.

Journalist Nikole Hannah-Jones, who spearheaded the 1619 Project, has come to its defence and emphasised the role that Black Americans have played in upholding the ideals of democracy that Trump and his supporters argue the US was founded upon. But calls to reprimand schools that teach the curriculum point to the Trump administration’s commitment to disregarding how foundational racism has been to the establishment of the US.

Similarly unwelcome, the Black Lives Matter movement is another example of how efforts to call attention to racism have been met with contempt. After the murders of Breonna Taylor, George Floyd and other Black Americans at the hands of police, national conversations on police brutality ensued, and the Black Lives Matter movement stood in the spotlight. As millions of Americans took to the streets to condemn this violence, the White House freely expressed its disdain for the movement.

Trump recently referred to Black Lives Matter as a “symbol of hate” and suggested that the movement has a “terrible name” and is discriminatory. His personal lawyer, Rudy Giuliani, has called the organisation a “domestic terror group” and claimed that saying “Black Lives Matter” is “inherently racist” and “anti-American.” Congressman Jim Hagedorn has claimed that the movement is at war with “our country” and “western culture”.

Viewed amid the backdrop of national protests against police brutality, attacks on anti-racism initiatives may seem as though they are just a reaction to the national climate. But history shows that movements for civil rights and racial justice have always been met with suspicion, contempt, and questioning of patriotism.

While currently lauded as an essential and positive moment in American history, the civil rights movement of the 1960s was viewed unfavourably at the time. Like the Black Lives Matter movement and the 1619 Project, it was seen as anti-American and a dangerous attempt to disrupt the political, social and economic status quo.

Polling from the time period revealed strong opposition to the movement. According to Time magazine, a May 1961 Gallup poll revealed that “only 22 percent of Americans approved of what the Freedom Riders were doing, and 57 percent of Americans said that the ‘sit-ins at lunch counters, freedom buses, and other demonstrations by Negroes were hurting the Negro’s chances of being integrated in the South’”.

In September 1964, a New York Times survey of white New Yorkers revealed equally distasteful views of the civil rights movement. The results showed that 45 percent believed “too much was being done for Negroes”, 40 percent claimed “it would bother them if a number of Negroes lived in their neighborhoods”, 80 percent were opposed to “the school pairing plans of the Board of Education”, and nearly 50 percent believed that nonviolent demonstrations had “hurt the Negro cause”. The survey also revealed that “they spoke of Negroes’ receiving ‘everything on a silver platter’ and of ‘reverse discrimination’ against whites”.

Individuals who chose to participate in what are now hailed as nonviolent protests were heckled, physically assaulted, and met with violent counter-protests. Leaders who are admired today, such as Martin Luther King Jr and Rosa Parks, were subject to the same anti-American labels that were placed on the civil rights movement at large. King was surveilled by the FBI, which described him as  “demagogic” and extremely “dangerous” from the standpoint of “national security”.

The reason why the civil rights movement is now viewed favourably is, ironically, the same reason why the Black Lives Matter Movement, the 1619 Project and federal anti-racism training programmes are viewed with contempt.

As national protests against police brutality and systemic racism continue, Trump and his supporters show no signs of reversing their position

The protests of the 1960s and the legislation that was subsequently passed, such as the Voting Rights Act and the Civil Rights Act, were accepted as racial progress. Some believed the US had finally absolved itself from the sins of slavery, Jim Crow and anti-Blackness.

But current calls for racial justice challenge the view of a righteous and honourable US that has already worked its way past racism. It encourages every American to critically examine how systemic racism has affected our society, whether by studying the history of slavery more in-depth, openly acknowledging white privilege or reaffirming the value of Black lives.

The Trump administration, on the other hand, has not only embraced the view of an innocent US, but implied that to be American is to reject the view that the country has caused harm to others, including Black Americans.

As national protests against police brutality and systemic racism continue, Trump and his supporters show no signs of reversing their position. Nevertheless, an examination of the role of racism in the founding and current climate of the US has undeniably begun, and its momentum will not be deterred by presidential attacks on those who are committed to realising racial justice.

Nena Beecham
Nena Beecham is a Senior Research Fellow at the Bridge Initiative, a research project on Islamophobia housed at Georgetown University. She is a graduate of the Walsh School of Foreign Service. Her research focuses on structural racism, immigration, Black Muslims, and Islamophobia in the US. Her work has been published in Al Jazeera and Teen Vogue. Opinions expressed are solely those of the author and do not necessarily reflect the views or opinions of her employer. 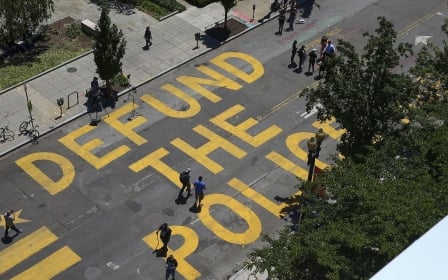