Beneath veneer of progress, sexual assault common in Tunisia

Despite constitutional amendments in Tunisia to protect women, there is a long way to go to get justice for assault victims 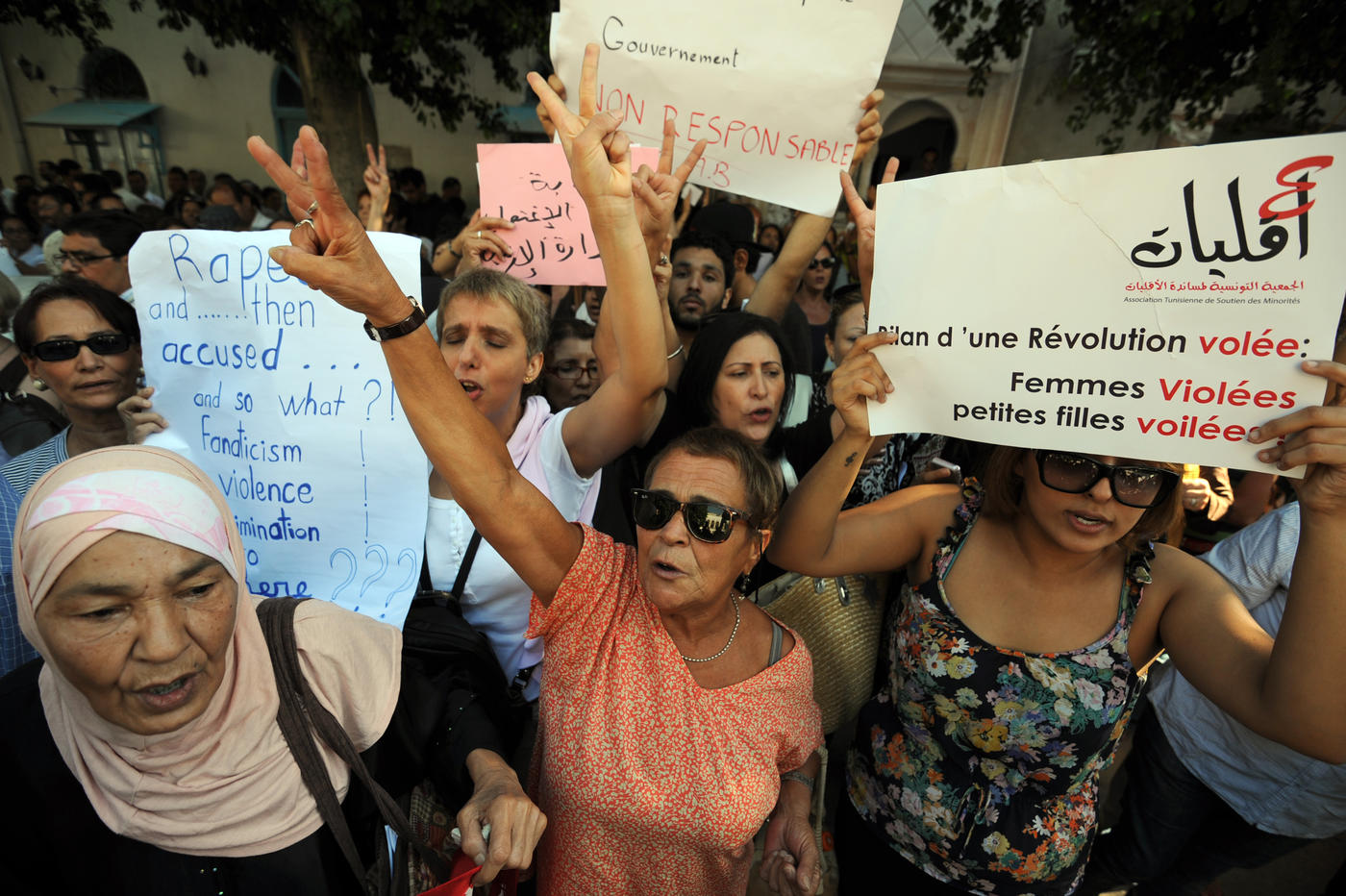 Sarah’s stomach tightened as she heard the door lock click shut. The whole situation felt wrong to her. Her academic advisor, a man she had been close to for years during her English literature studies, had previously seemed like an affable man who got along well with his students. All of that changed as soon as the door closed and her advisor, in his mid-60s, asked her to sit. She told him she preferred to leave and discuss her thesis in a cafe, like he promised, but he told her to stay.

As soon as she sat in a chair, he came up behind her, grabbed her hair and neck, and told her that she had “the most intoxicating smell ever”. Sarah felt paralysed. The man she had known for so long, who also happened to be a family friend, was now violating her. Tears streamed down her face, and although she was feeling paralysed, she managed to plead with him, “Please let me go.”

He threatened her, “You know your whole future is in my hands.” Sarah did not know what to do. Her instincts brought her to the door, but to no avail, since he had locked it from the inside. Next to the door, a glass cabinet showed his reflection. His lips curled into a smile, while his eyes, showing only malevolence, stared back at her. He pulled out the key from his pocket, “Looking for this?”

He then slammed her against the door, squeezed her face forcing her lips to his. In that moment, all she cared about was escaping. Sarah pushed him with all of her strength and he fell. She then gave him an ultimatum, holding her elbow against the glass section of his front door, “Either you unlock the door or I break this and scream until someone comes.” Her advisor obliged. Sarah took her things and as she was leaving, he asked her, “Where are you going? Do you need a ride?”

Sarah jumped into the first cab she saw and rode to her boyfriend’s house. After telling him what happened she had to calm him down. He wanted to kill the man who had tried to rape her. For days, she resisted telling her parents. She felt ashamed at what she considered to be her own “naiveté for having gone into the man’s house". Finally, she told her parents everything and they arranged a meeting with the dean of her school.

The dean listened to her side of the story and promised to take action. By taking action, what the dean truly meant was that he would switch her to a new advisor. Her old advisor, the man who attacked her, faced no repercussions.

Sarah shared her story with many of her classmates at the predominantly female school, which also happened to be one of the best universities in Tunisia.

Two other female students heard Sarah’s story and shared almost identical stories that happened with the same professor. The professor never faced any repercussions and now lives happily retired at home, often spending time with his wife, children and grandchildren.

Sarah’s story is tragic, as she had to walk around in disgust for the remaining years of her education at university, while her attacker remained unpunished. Additionally, she still carries guilt for having made the decision to go into the man’s house. Still, she considers herself lucky in that he never was able to rape her.

Unfortunately, many women in Tunisia go through similar situations, manipulated by men they trust and eventually becoming victims of rape or other forms of assault.

According to a National Board for Family and Population (ONFP) 2010 survey of 3,873 women aged between 18 and 64, 47.6 percent had experienced some form of violence during their lives. Additionally, in 78.2 percent of the cases of sexual assault, the perpetrators were intimate associates or colleagues of the women.

They utilised their power as men with authority to violate the women who put their trust in them. Just like in Sarah’s case, the perpetrators of sexual assault often walked away without facing punishment. Despite constitutional amendments enshrining gender equality and parity on parliamentary ballots, a culture of sexual assault in Tunisia, especially in marriages, remains normalised.

For years, Tunisia hailed itself as a bastion of progress on women’s rights relative to its neighbours. However, according to Shereen El Feki, author of Sex and the Citadel: Intimate Life in a Changing Arab World, this “state-sponsored feminism was just window dressing”. She believes conservative opinions “were always there. It’s only now that they are able to come to the fore.” El Feki sees Tunisia not as unique but actually similar to many of its neighbours in the global south in terms of the prevalence of sexual assault.

Today, on the International Day for the Elimination of Violence against Women, Amnesty International released a comprehensive report called Assaulted and accused: Sexual and gender-based violence in Tunisia, which highlights the major issues that still remain in the path toward justice for female victims of sexual assault.

In the report, Amnesty International says: “Two of the key obstacles to justice are under-reporting of sexual violence, and low conviction rates for rape.”

In Sarah’s case, she presented her a report of her attack to her university’s dean. Ideally, he should have reported the case to police, who should then have handled it in a sensitive and timely manner, without blaming the victim. Instead, the dean handled the issue internally, without even reprimanding the perpetrator.

Even if Sarah’s account was reported to police, a judge could have easily dismissed the case based on a lack of evidence. In Tunisia, “he said-she said” always works in favour of the man. Amnesty notes “testimony of the survivor is usually considered insufficient on its own”. Sarah thought she saved herself more suffering just by letting her case blow over. The other victims of her advisor probably thought the same way.

Marital rape also continues to be a problematic issue in Tunisia. Tunisia’s constitution, signed into law in 2014, guarantees equality between genders. However, in practice, the constitution is often superseded by more obsolete laws from the personal status code. As Amnesty notes in its report, “marital rape is not explicitly recognised as a crime under Tunisian legislation. Under Article 23 of the Personal Status Code, both spouses ‘must fulfill their marital duties according to custom’.”

Many women, whether newly married or a veteran of marriage, are victims of rape, solely because certain customs and a loophole in the Personal Status Code typically discourage them from speaking out.

Furthermore and even more difficult to handle is the fact that “many women are unaware that what they endure is in fact rape.” This issue is particularly tricky, as Dr El Feki notes, because “marital rape is within the private realm. Laws against marital rape contradict the idea of male support and provision for an obedient female.”

These aspects of Tunisian private life remain powerful, so women who end up victims of marital rape and who are physically beaten by their husbands often face dead ends when pursuing justice. In its analysis of the justice system for assault victims, Amnesty International discovered that “police see their role as promoting mediation and reconciliation”. Victims are often forced to go back home and the cycle of physical abuse repeats itself, often getting worse over time.

Head researcher and report writer Magda Mughrabi and her team at Amnesty International have had their eyes on a campaign in Tunisia ever since the 2012 case of Meriem Ben Mohamed, in which she was raped by two police officers and then charged with indecency.

“People rallied around Meriem’s case because she was so honest in her account. Many survivors are unwilling to speak and feel ashamed about sharing their stories.” Meriem, on the other hand, pursued her case until the charges were reversed and the two police officers were put in prison.

Meriem’s case and Amnesty’s call for action has already helped galvanise support for the issue of women’s bodily safety in Tunisia. In August 2014, Tunisia’s government said it would work on a specific law concerning violence against women.

Additionally, civil society activists have been paramount in providing suggestions for Amnesty International’s recommendations for Tunisia’s government to ameliorate the day-to-day dangers faced by women.

Shereen El Feki believes the issue can be solved through a gradual process of evolution, mainly through shifts in mentality rather than solely legal changes.

She believes many Arab men are struggling with a crisis of masculinity. She sees sexual violence “on a spectrum of violence. Men who go to fight with ISIS are on one end, while male perpetrators of sexual violence are on another. They are both violent partially because they feel demasculinised by the pressure of society: having a good job, making money, getting married, and having sex and children.”

Many Tunisian men are not able to experience these luxuries and end up searching for other ways to satiate their desires for masculinising behaviour. El Feki sees these men as suffering from society, but also as part of the solution. “We need to intervene with them at an early stage,” she believes, in order to help them before they develop into violent individuals.

In the end, Mughrabi and her fellow activists also want the government to take action. “The Tunisian constitution is a major achievement. However, the laws and the cultural mindset need to change together. Women should not have to feel afraid of being blamed,” Mughrabi told Middle East Eye.

“This is a long-term issue that perpetuates and normalises violence against specific groups. There is political will to work on the issue. We know it won’t happen overnight, but we are hopeful.”

Many of the survivors of sexual assault are also hopeful that one day they will see justice for the violations of their bodies. Sarah was “paranoid about men for years following the incident” and will likely carry the burden around with her for the rest of her life. She says, “I hope that in the future other women won’t have to experience what I experienced. They should know that it doesn’t have to be that way.”