The Berber village of Ait Ouabane aspires to be a tourist hotspot after hosting Raconte-Arts, Algeria’s most popular underground arts festival 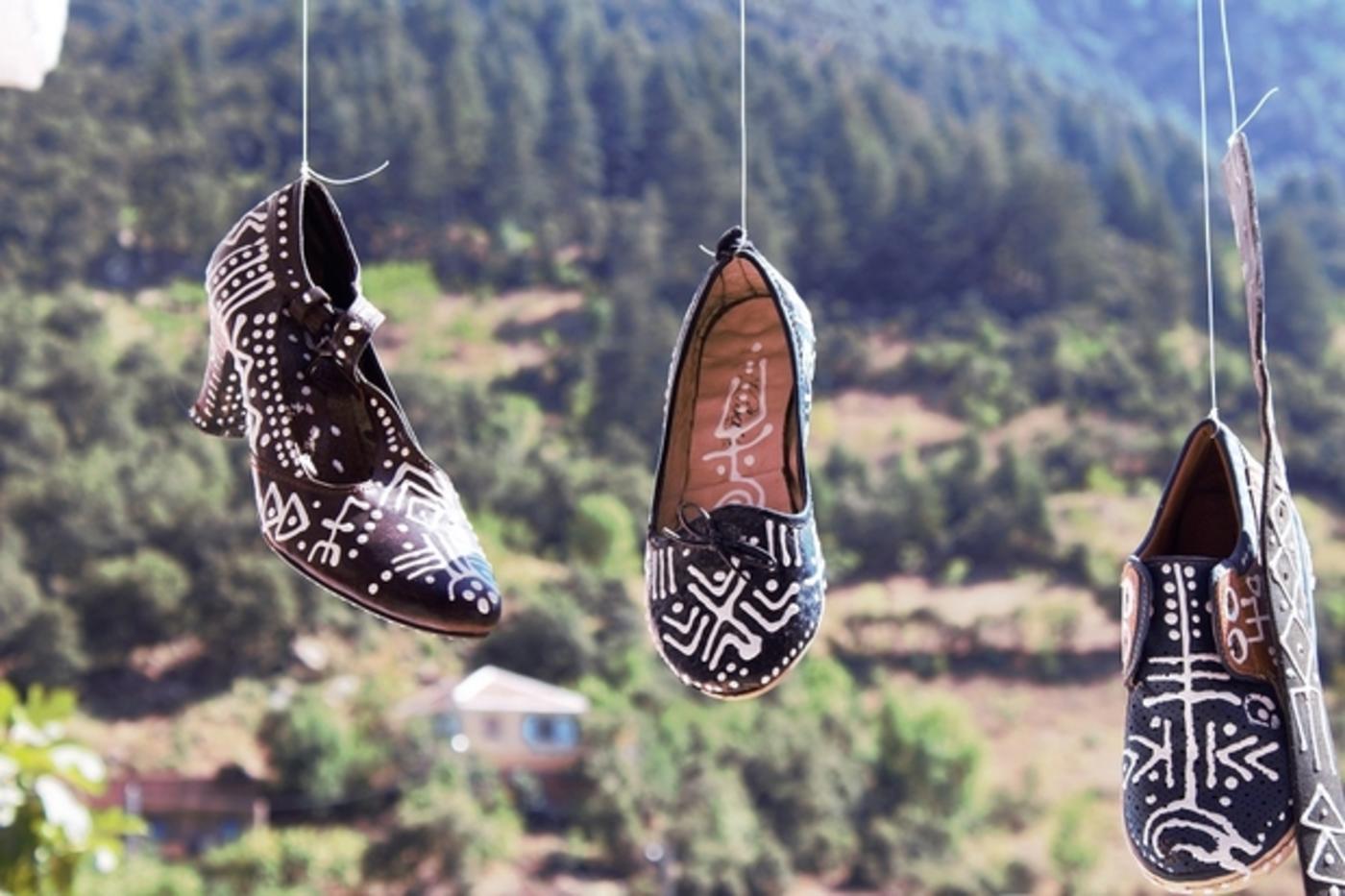 AIT OUABANE, Algeria - The nearly 4,000 residents of Ait Ouabane, a Berber village located in the Tizi Ouzou province in Kabylie, around 150km west of the capital Algiers, have little opportunity to keep themselves entertained, especially at night.

The remote village, which was destroyed by the French colonial regime during the Algerian revolution, has been partly rebuilt since then. It is still in need of basic cultural and entertainment facilities.

'Here, there is no cinema, no concert venue and no conference room either'

“Here, there is no cinema, no concert venue and no conference room either. During the summertime, we only have wedding celebrations to amuse ourselves,” Massinissa, a local architect in his early twenties, told Middle East Eye.

But between 24-31 July, the tiny town that is perched in the breathtaking Djurdjura mountain range, became the country’s hotspot for fans of live music and art exhibitions.

Ait Ouabane was chosen to host this year’s Raconte-Arts, Algeria’s most popular indie travelling festival. The event's 14th anniversary was packed with countless outdoor shows with free access. Thousands of people flocked to the picturesque city, home to pastel-coloured villas that adorn the landscape.

While greeting visitors and providing information under a tent that was set up at the entrance of the village, Nawal, a volunteer in her forties, described the festival's success.

“This is unprecedented. I have spent my whole life here. I have never seen the village like this before.” Nearby, a large banner that reads “Welcome to Ait Ouabane” in Arabic, French and Tamazight, the Berber’s dialect, greeted all the newcomers.

The village's central area was closed off to cars, allowing artists and visitors to perform and roam freely.

Standing next to Nawal, Celia, another volunteer in her early twenties, looked amazed. “We were expecting lot of people but not this many. The population has increased almost tenfold over the past few days,” she told MEE.

Due to the lack of infrastructure and space in the village, artists perform wherever they can: on sidewalks, in squares and even in the graveyard. One of the most memorable moments of the festival, La Nuit du Conte, a multi-language storytelling gathering, was held in Ait Ouabane’s cemetery every night during the festival. Local and international storytellers shared tales with the audience until sunrise.

Arezki Diche is the president of Tizi Ouzou's association of cinema and dramatic arts, a non-profit organisation which organises the festival along with the locals.

“Artists and performers in Kabylie, and more generally in Algeria, suffer from a lack of infrastructure," Diche told MEE. "[They] crucially need space to produce, to rehearse, to exhibit. This is why Raconte-Arts was conceived as a street festival. We have no other choice than occupying public areas and any room we can find."

The event's organisers even used Ait Ouabane’s mosque as their headquarters due to a lack of space.

"This year, we raised about four million dinars (near $36,000), mainly from private donations,” said Diche, adding that most of the donors live in Kabylie.

The festival-goers mostly came from all around Algeria. “Most of them live in the neighbouring towns but several have travelled long distances. Actually, I met with a young married couple who drove from Tindouf [around 1,600km south of Ait Ouabane] to our village," Celia said.

Ilhem, 29, took the bus from Sidi Bel Abbes, a city located 600km west of Ait Ouabane. She attended with a group of friends and it was her second time at the festival. She is staying with a local couple she befriended during the festival.

“This festival is a must-see in Algeria because it brings people together. This is a chance to get closer to my friends and make new ones, particularly among the villagers," she said. " I have actually gotten along with a couple, who welcomed me in their house."

When Malika, a 35-year-old pharmacist, was invited by some Algerian friends to attend Raconte-Arts for the first time, she did not hesitate. The French Algerian flew in from Nice, in southern France, where she lives, to her parents’ native land.

“I travelled to Ait Ouabane because I was told that I would enjoy beautiful scenery, and I did. But what I like the most about Raconte-Arts is that we have the chance to meet and share [stories] with people from all around Algeria," she said.

Malika does not speak Tamazight, making it difficult for her to communicate with the locals who hosted her in their home. "But I did appreciate their kindness and hospitality. This was my first visit in Kabylie and it won’t be the last,” she said.

According to the organisers, about 100 foreigners, mostly from European countries, attended the event this year as well.

For many Algerian visitors, it was a rare occasion to enjoy their favourite bands performance live while discovering up-and-coming artists. Others say it is a chance to explore the eastern mountainous region.

Tinhinen Makaci Tina, a rights activist in her late twenties from Algiers, has become a regular visitor of the arts festival, this one being her fourth visit.

“I would have never visited Ait Ouabane if it was not for Raconte-Arts. This event encourages us to discover little known cities in Kabylie,” Tina said. "It is a unique, enticing arts and human experience in Algeria."

'This event encourages us to discover little known cities in Kabylie'

According to Denis Martinez, former professor at the School of Arts in Algiers and co-founder of the festival, 350 artists were scheduled to perform during the week-long festival, but a total of 500 performers showed up in the village eager to participate.

"We could not prevent those who were not initially invited to join us. Raconte-Arts is and should remain a grassroots event,” Martinez said.

Many famous performers like Algerian pop singer Amel Zen and novelist Samir Toumi volunteered to participate in the event, as well as many other aspiring local talents. According to Martinez, the festival featured some artists from 15 different countries: like Carole Joffrin, founder of the band Ecoutez Voir (Listen and Watch), a group that promotes storytelling across France, and Riccardo Nicolai, an author from Italy.

“There is no [special treatment] for stars at Raconte-Arts. All the participants, whether they are professional or non-professional, are treated equally: no one gets paid and everybody sleeps at locals’ [homes], and eats in the school cafeteria,” said Diche.

In 1992, the Islamic Salvation Front (FIS) was poised to win the legislative election, but Algeria's generals intervened in a coup and triggered a civil war. Around 200,000 Algerians lost their lives during what became known as Algeria’s “Black Decade”.

'There is no special treatment for stars at Raconte-Arts'

“The idea of Raconte-Arts was to inject a much-needed lifeline into the numerous towns in Kabylie. This is the reason why the festival moves every year to a different village,” Diche said. “Today, it remains Algeria’s sole touring arts festival.”

The Algerian population lived under a state of emergency that started from 1992 until 2011. While painting a black-and-white mural in the village’s main square, Martinez said: “When we created Raconte-Arts, we wanted to turn the page of the national tragedy."

In 2003, Martinez, along with two friends, who are cultural coordinators at the youth centre in Tizi Ouzou, first had the idea to create an underground arts festival in Kabylie. The first event was held in 2004 in Ath Yenni, a small town in northern Algeria.

“The central government in Algiers continues to focus on the country’s main cities and still neglects small towns," said Diche.

Raconte-Arts is not only about entertainment. It also offers a solution for the development of the mountainous region, organisers believe.

“Such an event could be a way to empower the villages of Kabylie,” said Diche. “ With this experience, they understand that they don’t need lot of money to organise an international event.”

While preparing couscous, a traditional Algerian dish, Rabeh Ouazzi, a chef in an oil complex in Hassi Messaoud, 800km in the south of Algiers, took time off work to volunteer at the festival.

“We serve 1,200 meals daily. It is intense and exhausting work but all this is for the community’s best interest," Ouazz said.

Massinissa, who aspires to open Ait Ouabane’s first guesthouse, is optimistic about the village’s future. “All this creativity brings people together and creates excitement in our community. I hope we can keep it going.”