If developed, nearly 1,000 acres seized by Israeli authorities last month could link Israeli settlements, some that started as tiny outposts, between Jerusalem and the West Bank 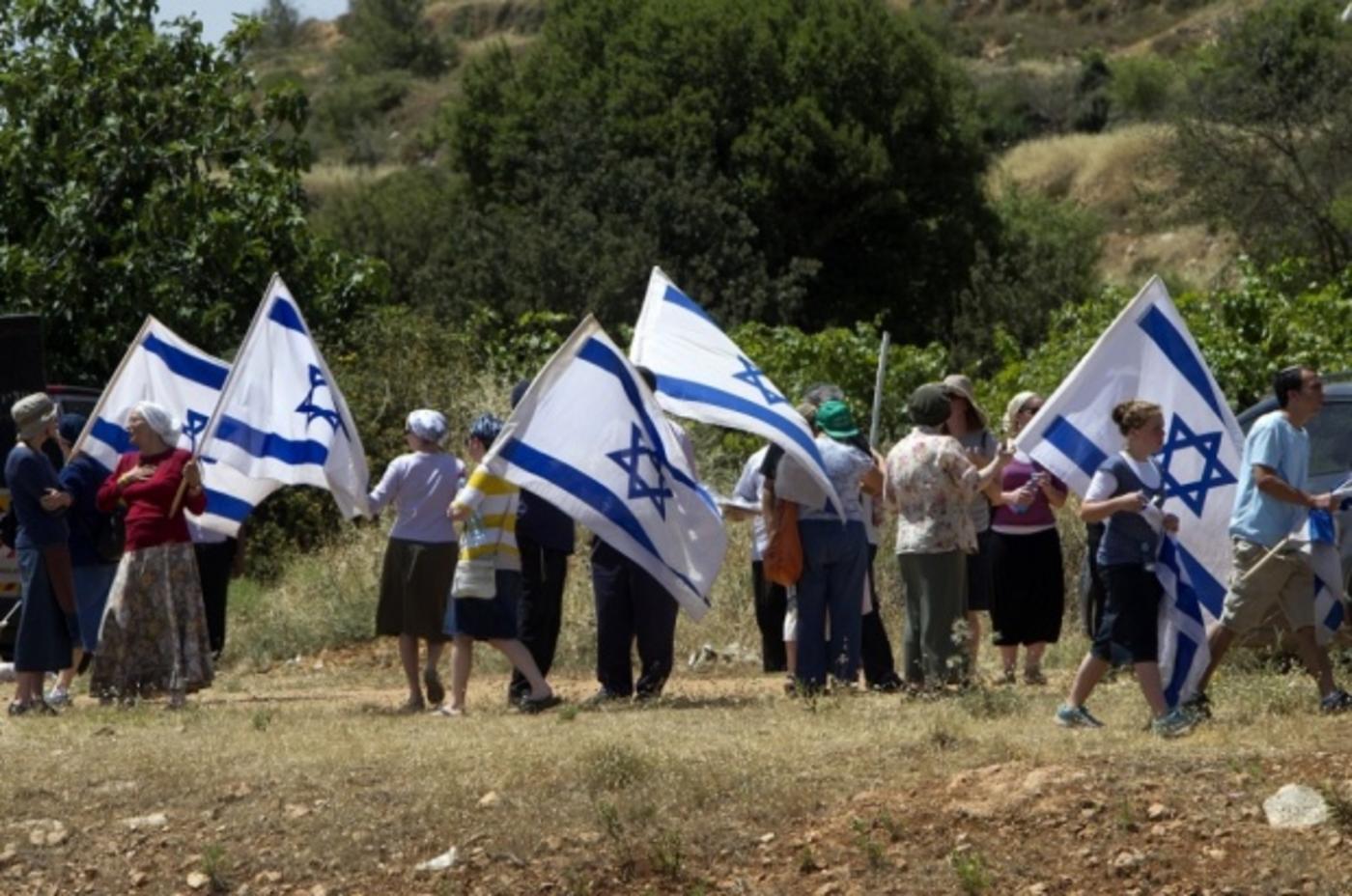 In one of the boldest moves of its kind, Israeli authorities confiscated 4,000 dunums – 990 acres – of West Bank land in late August. A chorus of frustration and disapproval from international bodies met the declaration: on land that borders both the 1949 Armistice Green Line and Palestinian villages of al-Jab’a and Surif, the seizure is likely to pave the way for settlement expansion, and could seriously stifle Palestinian development.

While it might change the reality of the West Bank dramatically, however, the news shouldn’t be surprising; plans for this area have long been on the drawing board of Israeli authorities. In fact, a critical look at a map of the region shows these intentions have been perceptible for years.

Located in Gush Etzion, south of Bethlehem, the confiscated land is bordered by a scattering of settlements: Beitar Illit, Kfar Etzion and Gvaot. And following this month's land grab, the closest, Gvaot, has been cast into the settlement spotlight. Established in 1982 as an Israeli army Nahal base, where residents combined military service, volunteering and agriculture, it was turned into a religious Yeshiva community in the 1990s. Now it’s inhabited by a handful of families, and because it’s never been officially recognised by the government, the homes and buildings in the community are all technically illegal under Israeli law.

The tenuous status of this tiny settlement means it might as well be referred to as an “outpost”: a small Israeli community established by radical, often religious groups without government authorisation, or as a military base, some distance from major settlements. After establishing a presence at these strategic points in the West Bank, these outposts are supported and developed by nearby settlements. Steps are taken to make them stronger, larger and even legal, setting the scene for a permanent presence and further expansion into the West Bank.

This is just what the confiscation is set to do for Gvaot – and it seems clear that Israeli authorities wish big things for the tiny settlement. In the past, the Israeli NGO, Peace Now, revealed a government plan to turn it into a city of 15,000 housing units: although that blueprint was never promoted, the minister of defense has approved two separate plans that would see the construction of 584 buildings around the settlement. The seizure of 4,000 dunums will mean plenty of room for Gvaot to expand. Even more importantly, it will link the settlement up to the Green Line – creating Israeli continuity between Jerusalem and the West Bank settlement blocs, and making Gvaot feel much more like part of Israel.

The thinking behind the seizure is no secret: representatives of Gush Etzion have been quite clear about the strategy. “If you look at a map today, you can see that there are no Jewish communities between Beitar Illit and Gush Etzion,” Shani Simowitz, a resident of a nearby settlement, told Middle East Eye. “So you connect them. Those 4,000 dunums connect Gvaot, Kibbutz Rosh Tzurim and the Orthodox settlement of Beitar Illit.”

Simowitz lives in Tekoa, a cluster of settlements to the east of Gush Etzion. She sees that community – which, like Gvaot, started life as a Israel army Nahal base – as exemplary of an outpost rationale, which strikes out “to the northernmost tip” of the area that Israeli developers and communities want to claim, before “joining the dots backwards.”

Filling in the gaps between isolated settlements and creating continuity across the Green Line, as Simowitz describes, means that if a peace agreement is ever reached, Israel will keep Gush Etzion, said Suhail Khalilieh, who heads up the settlement monitoring team at the Applied Research Institute Jerusalem (ARIJ), a Palestinian NGO.

“This is playing a crucial part in the long-term claim to the greater Jerusalem area, and it will have a big effect on the geography and the demography of the area," Khalilieh explained. “This has been planned, I think, since the Oslo Accords. It did not come out of the blue. The Israelis have been waiting for the perfect timing to fill in all the gaps. Everything is now coming into final play and everyone is revealing his own cards. The Israelis are looking to force facts on the ground that cannot be easily disputed.”

Gvaot’s potential story, of a tiny, illegal outpost evolving into a densely-populated, red-roofed city, is not an unusual one. Since 1967, the tale of settlers striking out independently to set up tents that claim land for the Jewish state has been a narrative that’s shaped the West Bank. Ma’ale Adumim’s website, for example, is proud to state that the settlement was founded in 1975 by 23 families who worked “diligently” and without government authorisation to build a city in the newly occupied West Bank. Today, Ma’ale Adumim is a settlement of some 39,000 people, built on thousands of dunums of confiscated Palestinian land.

“Gvaot is a military post that’s become civilised officially and they have plans that it’ll become a big city: this is the story across the West Bank,” Lior Amihai, at Peace Now’s Settlement Watch, said.

The policy of allowing, and even encouraging civilians to set up outposts, Amihai explained, began in the 1990s, when the government decided to stop establishing new settlements. It was at that point that Ariel Sharon, then Foreign Minister, urged Israelis to “run and grab as many hilltops” as they could.

Many obeyed the call quite literally, establishing small, isolated caravan communities on the West Bank’s rugged hills: according to Peace Now statistics, 99 outposts are now home to over 4,000 settlers.

“These outposts would be supported from the settlement regional councils with roads, water, electricity and so on,” Amihai says. “But the official policy was to disregard them: to say they’re illegal, they’re small, insignificant, they don’t have the power to change the political situation. So the outposts continue to grow. This begins with illegal construction, so the buildings have demolition orders, but they won’t actually be destroyed. On the contrary, they’ll be allowed to expand.”

Some outposts have, on occasion, been retroactively legalised: on recognition by the state, their caravans become permanent structures and tenders can be opened and promoted for further growth. Like all settlements, of course, they’re still illegal under international law. But once recognised by the Israeli legal system, they become solid facts on the ground: a stubborn Israeli flag in the land – and the resources it holds – that could be part of a future Palestinian state. No moves have been made to legalise Gvaot yet, but if the development of the state land surrounding it goes ahead, the original community will be insignificant compared to new, government-authorised, suburban sprawl.

The stealthy, outpost-driven creep of settlements, Amihai says, means Israel is acting unilaterally to alter the status the West Bank for its own purposes. But when it comes to the question of what Israel imagines for the West Bank, opinions differ.

At ARIJ, Suhail Khalilieh believes that some outposts close to Jerusalem, like Gvaot, are marked to remain part of Israel, while those further to the east have been established as bargaining chips to be evacuated as a “compromise” in final status negotiations. Amihai believes the rationale is less conciliatory. “If you connect the dots, you see that they generally have an intention to cut the West Bank from East to West,” he explains. “From Ariel all the way to the Jordan Valley, you have maybe a dozen outposts, like a ladder. You cut the West Bank in little pieces so that a Palestinian state will no longer be created.”

In Gush Etzion, Shani Simowitz doesn’t seem to regard this as a problem. She doesn’t believe in a two-state solution, and like many in Israel, she refers to the West Bank as Judea and Samaria. “If Jews have the right to build anywhere in the world then they have the right to build here, in the land given to us by God,” she says. “This is the heritage of the Jewish people and it should be part of the Israeli nation.”

Simowitz, of course, does not speak for the whole of the Israeli establishment: Justice Minister Tzipi Livni has condemned the move, and Minister of Finance, Yair Lapid, stated his opposition to “any swift changes in the West Bank right now.” But with any retraction of the seizure looking unlikely, it seems the expansionists in the Israeli government could now be leading the way – toward a tightening hold on the West Bank.