Comic Aamer Rahman on 'Islamophobia as a flavour of racism' 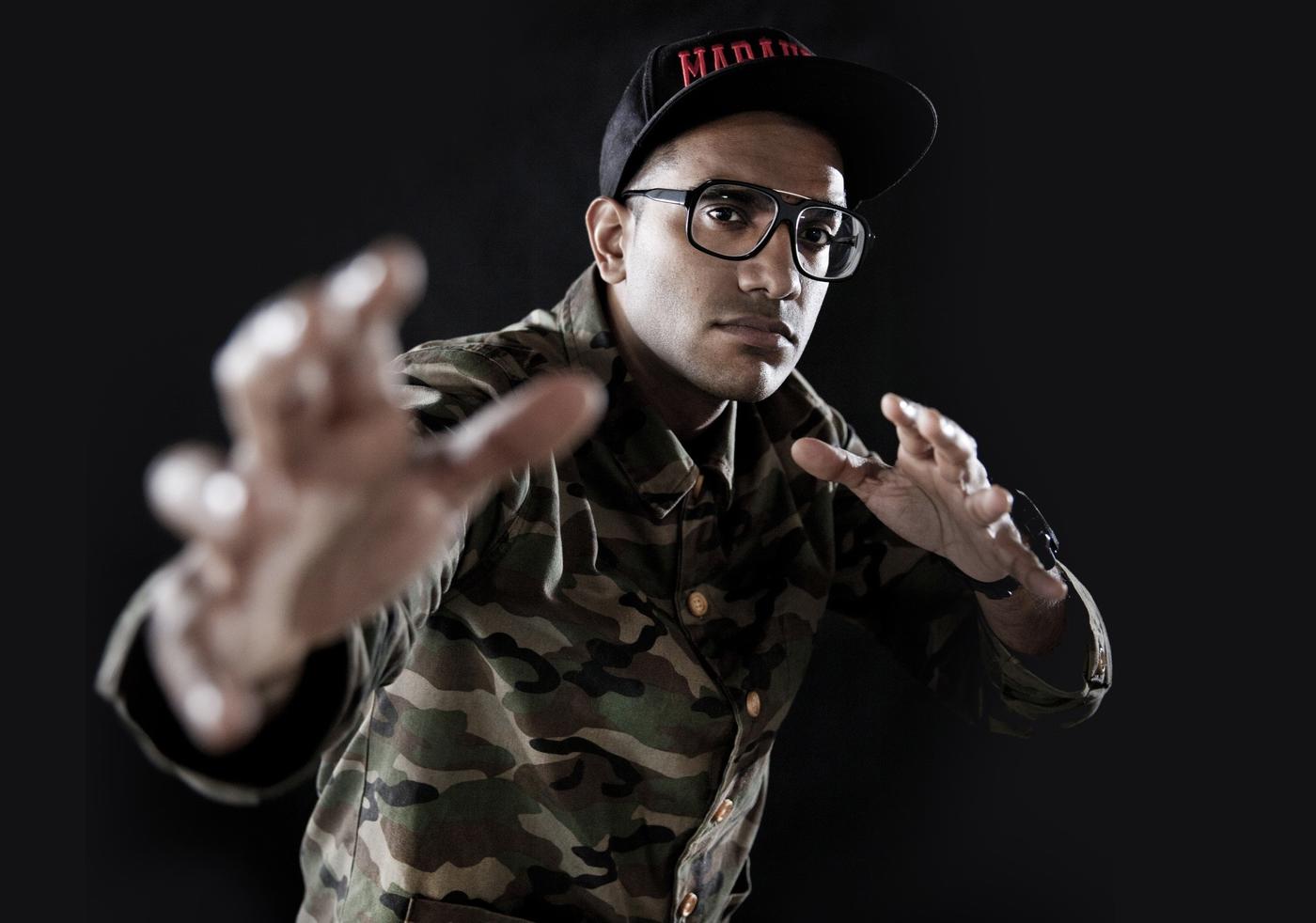 There’s something gripping about watching Aussie stand-up comedian Aamer Rahman in action. Beyond an undeniable personal charisma which has certainly contributed to his sell-out tours here in the UK, Australia and the US, the multi-award-winning comic has the ability to shock and challenge in equal measure, with sketches touching on some of the most controversial issues of the day, from the Islamic State group to Anders Breivik, skin heads to the detention of asylum seekers.

The power of Rahman’s comedy lies in a confrontational style which forces audiences to contemplate the pervasiveness of prejudice, and many people’s awkward complicity in its perpetuation. I caught up with him during his most recent UK solo tour, “The Truth Hurts” - dubbed one of The Guardian's Top 10 Comedy Shows of 2014 - to talk politics, racism and the limits of comedy.

Until his career took off last year when his now infamous “Reverse Racism” skit went viral, Rahman had been considering giving comedy up altogether. Having split from the award-winning comedy duo “Fear of a Brown Planet” he says: “I felt comedy was at a real dead end, Australia was too small and too limited an audience.”

Despite accolades and critical acclaim – he won the Melbourne International Comedy Festival Best Newcomer Award, opening for hit US comedian Dave Chapelle, and even a TV show to his name - the struggle to turn his niche comedy into a viable career remains a challenge for the 32-year-old, who cringes at some of the proposals sent his way. He reads me out a recent pitch to his agent involving a Muslim pub landlord – to be played by Aamer himself – whose job it would be to “challenge preconceived notions of Muslims”.

“I wanted to throw my phone at a wall,” he tells me. “That is one of the most offensive things anyone has ever sent me. Muslim pub landlord – coming soon,” he jokes sardonically.

I ask him why he thinks his Reverse Racism clip – in which he imagines a scenario where the very concept of “reverse racism” could actually be viable – went viral the way it did. The video now has well over a million YouTube views. “It hit a nerve – it’s an argument that so many people have had. Whenever racism is discussed, reverse racism is discussed. I always say this is actually the point of comedy. People think comedians are very original. No, the comedian confirms what you already know. That’s why you laugh, you already bought that but they re-articulated it in an entertaining way. What I said in that clip, everyone knows, we’ve all felt that our whole lives - it confirms a deep frustration that so many people have.”

Most recently, a poll by the MCB found that 95 percent of Muslims in the UK feel loyalty toward Britain – but is questioning the loyalty of British Muslim citizens the way forward in his view? “I don’t think it changes anything” he says, shaking his head. “It doesn’t convince racists any more than when there is a terrorist attack and Muslim organisations and leaders come out and say: ‘We are British/American/Australian just like you.’ It is fundamentally premised on the idea that maybe these people are all trying to kill us. Surprisingly they’re not, here’s a good news story for the day!”

So, what does he make of the argument that linking Islamophobia and racism shuts down valid criticism of the faith? “I see Islamophobia as a flavour of racism. It is a type of racism. To restrict racism to just skin colour, or just culture – it’s not something I agree with.  Racism I see as a systemic oppression, ‘otherising’, marking of a group of individuals according to race, ethnicity or culture, so you are on paper ‘white’, but you are also Muslim, which ticks you as ‘other’ – it is much more complicated than this notion that people don’t like the way you look so they start being horrible on the train.”

For Rahman, anti-Muslim sentiment is deeply political in nature. “The anti-Muslim paranoia which is generated in the West is so useful, because racism is based on imaginary things. The idea of the Muslims can trigger so many things in people’s imagination, you can use it to justify foreign policy, because we’re fighting 'these kinds of people'. You can use it to justify reparation policies and asylum policies, because these people are coming to invade and steal your jobs. You can use it to attack poor and working people because some of them are or look Muslim. That’s the best part of Islamophobia, you don’t even need to be Muslim - they just need to fall somewhere in the net of vaguely Muslim. It is good value for money.”

Rahman isn’t just an armchair theorist on this issue. His adopted brother runs RISE, the first refugee and asylum seeker organisation in Australia to be run and governed by refugees, asylum seekers and ex-detainees, and a group within which he himself has a history of activism. In one of his skits, he describes being part of a group of activists who trek out into the Australian desert to help free detainees. Without giving away the punch line, it involves blood, a woman handing her baby to strangers through a fence and Rahman spending some time in police custody.

Discussing the Charlie Hebdo attacks in France, I put to him the widely touted idea that Muslims are just too sensitive to accept criticism: “This is what came out during the whole Charlie Hebdo situation – you just can’t talk about Islam, you can’t criticise Islam, as if Islam hasn’t been under the microscope since 9/11, as if Islam hasn’t been systematically dissected and pulled apart in the media non-stop for the last decade. The idea that Muslims can’t be criticised – we’re in the middle now of the fourteenth year of a global war specifically targeting Muslims. Muslim communities have been subjected to unprecedented surveillance, monitoring, policing - these are all criticisms of Islam.”

Should some topics be off-limits in comedy then? I ask. Who gets to decide what those topics are? “I’m not for censorship,” he quickly interjects. “I think Muslims hold some things sacred in a way that it is difficult for non-religious people and maybe even religious but non-Muslim people to understand. Given where Muslims sit socially and politically, crossing those lines has quite deep implications. Because Muslims are often poor, marginalised, under-employed, etc.. Obviously any provocation is much much worse. If Muslims were rich and comfortable, I don’t think they’d be as upset about these things – they’d definitely still be upset, there’s no question, but I think that context is important. In France, when you live in a country which is more offended by your headscarf than racist pornographic cartoons that bully a minority, that’s got to be upsetting.”

As we wrap up our interview, I ask Rahman whether his flippant style of comedy can ever transcend the racist divide it speaks to - can it ever speak to the racist? “No,” he responds. “It can’t speak to the racist. It isn’t designed to speak to the racist, it is designed to validate victims of racism and what they think – one thing we’re always told growing up when we experience racism is that it isn’t there. You’re too sensitive, you’re misunderstanding, they didn’t mean it like that, it’s just a joke. It’s not – we have a sixth sense about it because we’ve experienced it our whole lives. It’s absolutely true, I’m not crazy, they shouldn’t have said that - that’s who my comedy is for.”

So when can we expect to see him back on stage in the UK next, I ask as he’s about to embark on the US leg of his tour. In his now trademark style, he smiles: “Look, if this Muslim pub idea takes off, I could franchise that and turn it into a tour show of me opening a franchise of Muslims pubs – Mubs.”

Aamer Rahman is starting a two-month tour of the US; find out more about his tours here.