EXCLUSIVE VIDEO: Al-Nusra Front and the battle for Syria's Aleppo Jabhat al-Nusra, or the al-Nusra Front, have since their formation in January 2012 established themselves as one of the most fearsome groups fighting the forces of Syrian President Bashar al-Assad.

Unlike the now more famous, Islamic State group, the Nusra Front still claims to derive its authority from Ayman al-Zawahiri, leader of al-Qaeda. Middle East Eye's contributors travelled to Orchard Palace in Aleppo, to capture exclusive footage of the al-Nusra Front in action, still fighting to bring down Assad and establish an Islamic state of their own in the country. 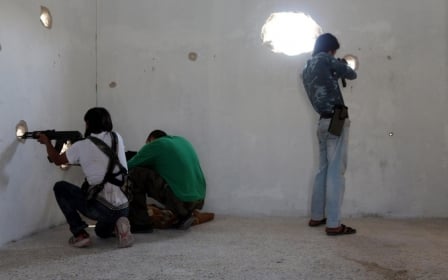