A guide to Turkey's politics and the PKK

As violence between the PKK and Islamic State continues in Kobane, the different players in the long running Turkey-PKK conflict examine their options 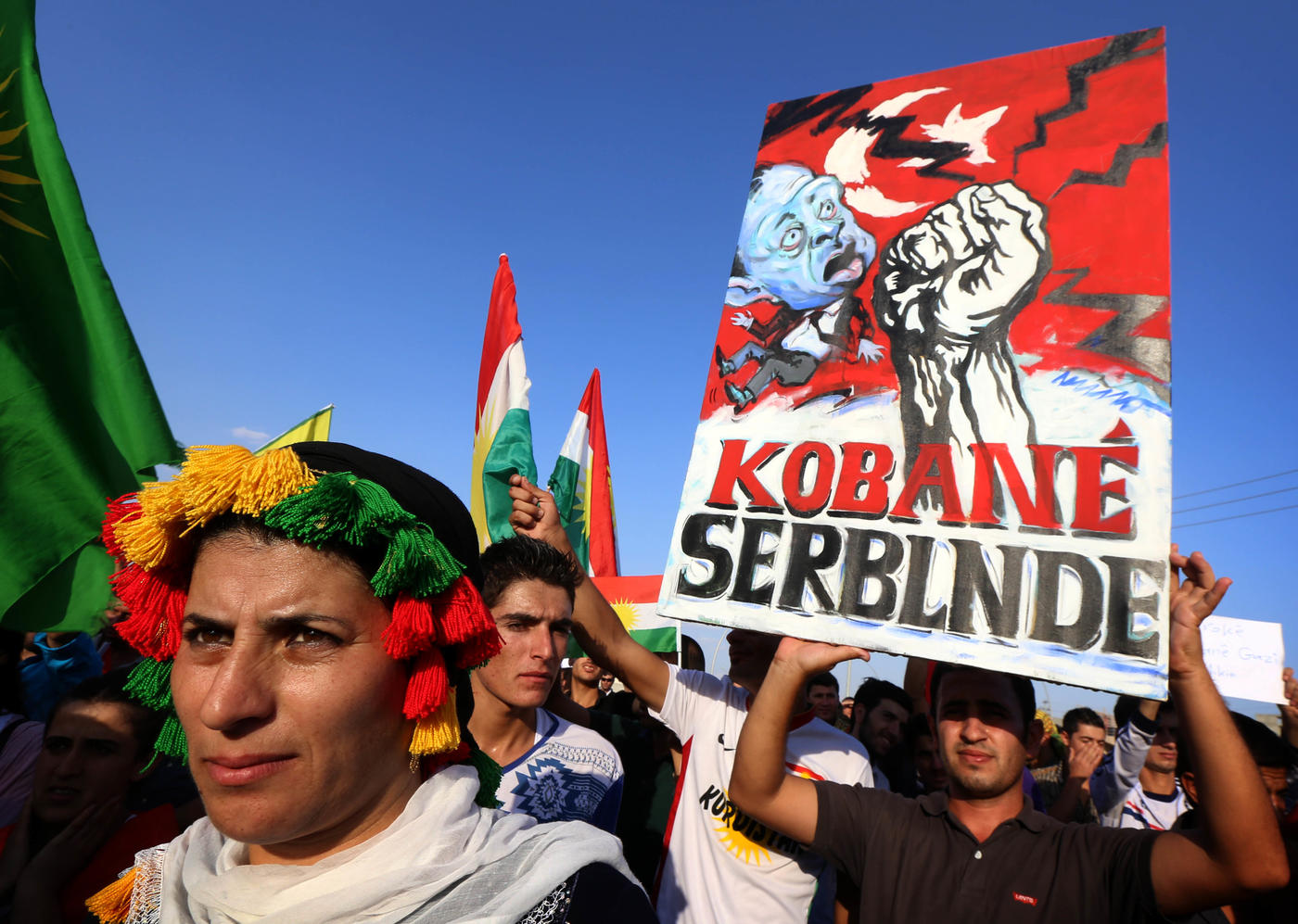 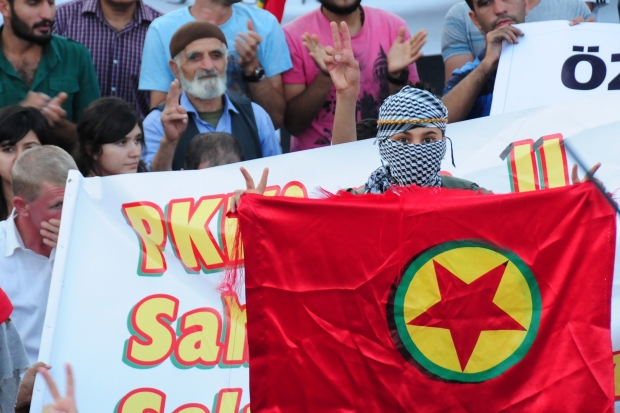 The Kurdistan Workers Party are a group of armed guerrilla fighters who historically aimed to create an autonomous Kurdistan region in part of Turkey.

Founded in 1978, the group have fought a bloody war with the Turkish state which has cost over 40,000 lives and are classified as a terrorist organisation by the US, EU and NATO.

Led by Abdullah Ocalan, who has been in prison since 1999 after being captured by the CIA, the party has in recent years moved away from Marxist-Leninism and the goal of an independent state and has moved towards what Ocalan has termed ‘Democratic Confederalism’ inspired by the writings of American anarchist theorist Murray Bookchin (whom Ocalan read avidly while in prison in Turkey).

To this end they founded the Union of Communities in Kurdistan (KCK), a radical experiment in direct democracy, a network stretching across parts of Turkey, Iran, Iraq and Syria designed to organise Kurds and other ethnic groups across Kurdish populated regions into a federalised system.

According to Abdullah Ocalan, “the democratic confederalism of Kurdistan is not a State system, it is the democratic system of a people without a State... It takes its power from the people and adopts to reach self-sufficiency in every field including economy.”

“Democratic confederalism is the movement of the Kurdish people to found their own democracy and organize their own social system... Democratic confederalism is the expression of the democratic union of the Kurdish people that have been split into four parts and have spread all over the world... It develops the (notion of) a democratic nation instead of the nationalist-statist nation based on strict borders.”

Though claiming to have abandoned their violent past, the group are still notorious in Turkey for their suicide bombings, kidnappings and attacks on military and civilian targets.

While previous Republican Peoples Party (CHP) and military governments had been unwaveringly hostile to the PKK, the AKP opened up negotiations for a peace treaty which had been gaining ground prior to the beginning of the fighting in Syria.

The rise of the Islamic State (IS) has led to conflict between the group (and its regional affiliates) and the Islamist group, who attack the PKK as “communists” and “atheists.”

Ocalan has warned that the fall of Kobane, the besieged Kurdish town on the border of Syria and Turkey, would mean the end of the peace process and has set an October 15 deadline for Turkey.

Ocalan said: "Our people in Kobane are going to resist to the end. Resistance will be manifested everywhere and every single Kurdish-populated area where ISIS is present.” 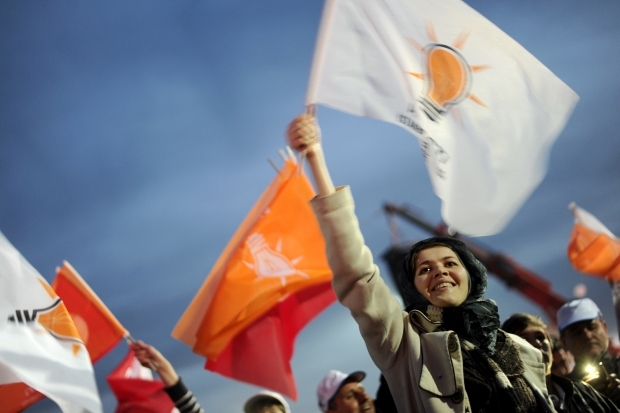 The ruling AKP came late to the Turkish political scene, but has now been in power in Turkey since 2002.

President and former Prime Minister Recep Tayyip Erdogan led the party and the country for 11 years from 2003 and ran a highly successful but also divisive administration – lauded by some for developing Turkey’s economy, standing up for traditional Muslim values and making Turkey a leader on the world scene, and attacked by others for its authoritarianism, erosion of secularism and support for privatisation and free market capitalism.

Though the AKP had originally pushed a “zero problem with neighbours” policy with regards to Syria, Erdogan changed tack to call for Bashar al-Assad’s overthrow.

His determination to see Assad overthrown has led to a perceived wilful blindness towards foreign fighters travelling across the border from Turkey, which many – including the Kurds and Turkish opposition – have claimed helped facilitate the rise of IS.

Clashes between the Kurdistan Workers Party (PKK) and IS in Rojava (Syrian Kurdistan) have also opened up perceived opportunities for Turkey to undermine the Kurdish separatists.

Despite the peace process being seemingly on the verge of securing a deal between the government and the PKK, there is a still a lot of hostility towards the group in Turkey, with one former Turkish Deputy Prime Minister lambasting them as “worse than ISIS” on twitter.

Erdogan has also attacked the PKK saying that, for Turkey, they are “the same” as IS.

"It is wrong to consider them as different from each other," he said.

"Some visit Kobane and then say 'Kobane is under attack. Turkey is not doing anything to help.' Where do people who come from Kobane go? Where do they take refuge? They take refuge in Turkey and Turkey is hosting them. But despite this, those who are involved in PKK terrorism are making an effort to stake a claim in this,” Erdogan said.

"It is not possible for us to see this positively."

Commenting on the demonstrations which have left 23 people dead he that it was "very obvious that this game is aimed at sabotaging the peaceful environment in the east and southeast as well as the peace process and our brotherhood."

One major risk to Erdogan is that a loss of Kurdish support could erode his electoral base – he has won a lot of support from Kurds over the peace process and his agreement to support Kurdish linguistic and cultural rights. 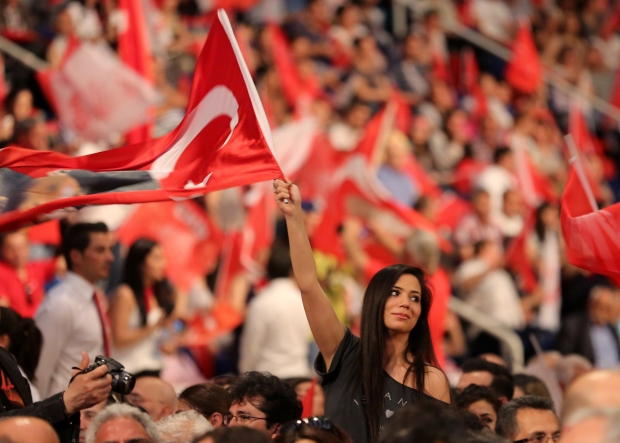 The political party of the founder of the Republic of Turkey, Mustafa Kemal Ataturk, the CHP have ruled Turkey for longer than any other party. Following the Kemalist ideology, the group is staunchly committed both to secularism and the Turkish national identity, which has made them historically hostile both to Islamists and Kurdish separatists.

The CHP are intensely hostile to President Erdogan, viewing him as both a closet Islamist and soft on Kurdish militant groups – they are often seen as opposing Erdogan on virtually every possible issue.

On Syria, they have been seen to be supporters of Bashar al-Assad and have staunchly opposed Turkish involvement in the war in Syria.

“I call on the government to reconsider its foreign policy agenda,” he told a press conference on October 9.

They voted against intervention in Iraq and Syria in the Turkish parliament. 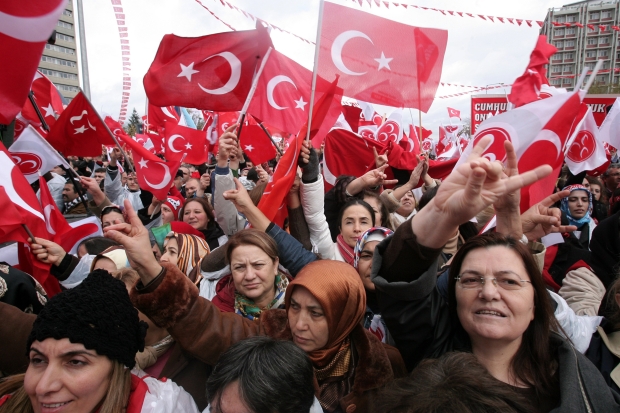 A far-right organisation (often labelled neo-fascist) the MHP’s paramilitary wing the Grey Wolves were notorious in the 1970’s for murdering left-wing academics and fighting the PKK and other left-wing groups (the hand gesture in the photo is a reference to the Grey Wolves.)

Though less concerned with secularism than the CHP, their ultra-nationalism has made them deeply hostile to the Kurdish peace process instigated by Erdogan.

In parliament, the MHP supported Turkey’s mandate to join military action in Iraq and Syria.

During the protests over the siege of Kobane, Kurdish demonstrators stoned an MHP building in Bağcılar, a reflection of the deep resentment that minorities feel towards the far-right group. 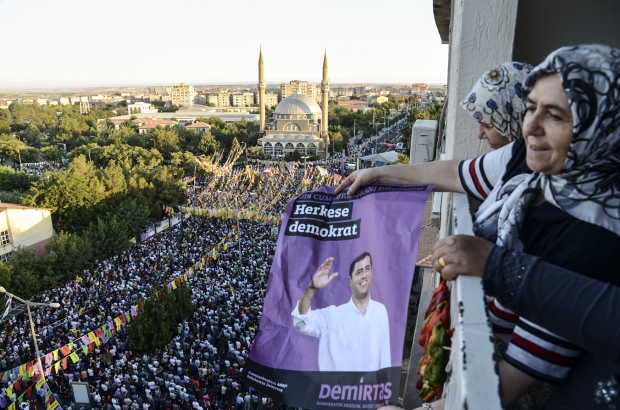 The HDP and BDP are fraternal left-wing pro-Kurdish political parties in Turkey. Economically left-wing and socially liberal, the parties have been strong supporters of LGBT rights, women’s rights, trade unionism and the rights of minority groups like Alevis and Armenians. Unlike the CHP they are strongly anti-nationalist and are more sympathetic to federalism.

In a statement released on October 3, in light of the situation in Kobane, the HDP savaged the AKP and the Turkish government describing their foreign policy as “offensive, sectarian and discriminatory.”

“Turkey is one of the countries with primary responsibility for the existence, growth and spread of ISIS,” it said.

“The impact of Turkish policy on the all-out struggle against ISIS in Kobane is significant. This foreign policy has mainly been shaped by the objectives of bringing about the Assad regime’s collapse and preventing an autonomous Kurdish area in the region. The mobility of ISIS members at the borders of Turkey, and global jihadist reinforcements coming through Turkey’s borders, pose ever increasing threats to the peoples of the Middle East.”

They called for “international public opinion to provide open political/diplomatic, military, economic and humanitarian support for the Kurdish Cantons in Syria, which can provide a model for a democratic Syria.”

Both the parties opposed the Turkish mandate for action in Iraq and Syria.

“The most serious and open threat against the peoples of Turkey and of the region is ISIL. But the government’ motion does not reflect that,” read a statement issued by the HDP. “That also shows that Turkey will not be use an effective approach against the ISIL.”

They also condemned the labelling of the Democratic Union Party (PYD) as a “terrorist” organisation and warned that the Kurdish peace process was under threat.

Confusingly, the Kurdish Hezbollah (and its political affiliate the Free Cause Party) has no affiliation to the Lebanese Shiite militant group of the same name and is in fact a Sunni Islamist group who have reportedly expressed support for the Islamic State.

The group originally arose as a response to the secularist PKK and in addition to advocating constitutional protections for the Kurds in Turkey, has also advocated socially conservative Islamist policies such as the outlawing of adultery.

On October 8 as protests broke out across Turkey, clashes between the group and leftist or secularist Kurds were reported.

A message released by a twitter account called the ‘Press Office of Hezbollah’ called on its supporters to defend themselves:

“Let our Muslim people and members know that the Hezbollah community will, God willing, do whatever is necessary to protect them.” 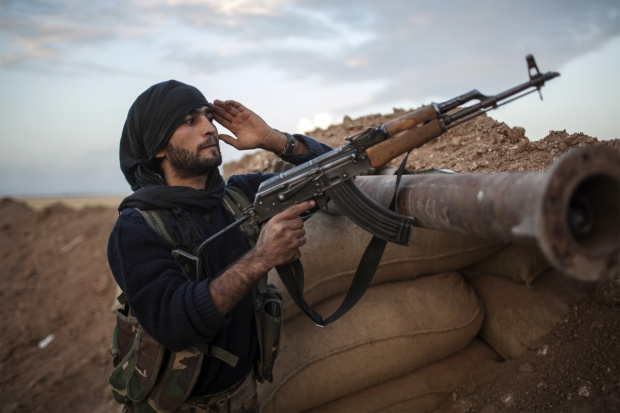 The PYD and its military wing the YPG are the main affiliates of the PKK and KCK in Syria, and purportedly support the Democratic Confederalism of its parent organisations.

Since the beginning of the war in Syria their broad strategy was to oppose Assad politically (joining the pro-dialogue National Coordination Committee for the Forces of Democratic Change) while carving out an autonomous region in the North of Syria, though they have been repeatedly accused of supporting Assad by the Turkish government and the right-wing Kurdish Regional Government (KRG) in Iraq, who are also hostile to the PKK.

Unlike most Syrian Kurdish parties, it was hesitant to join the anti-Assad Kurdish National Council (KNC) due its support from the KRG, though it later signed a cooperation agreement with the organisation over defence of Kurdish areas in Syria.

The chairman of PYD, Salih Muslim Muhammed, warned in 2013 that a solution to the fighting in Syria would have to include Bashar al-Assad.

“We have been fighting with the regime since the 2004 Kurdish uprising,” he told Turkish TV news program The 32nd Day. “We have nothing in common with them. They don’t recognize Kurdish identity.”

“But,” he added, “others are worse than the regime," referring to the increasing influence of radical Islamist groups in the war.

Massoud Barzani, the leader of the KRG, described the PYD’s “cooperation” with the Assad government as a “dangerous game.”

“PYD’s cooperation with the regime is a dangerous game for the future of our people in Rojava. PYD has not only taken control of the region, it has already started to arrest and kill members of other party members,” Barzani said.

“The PYD has dragged the Kurds into a war which does not belong to Kurds and will not bring them any gain. This war has forced thousands of Syrian Kurds to migrate, with PYD members opposing Kurdish unity and banning Kurdistan’s flag in Rojava. They have currently declared a de facto administration. This is clearly a unilateral act which disregards the other Kurdish parties.”