Haunted by the horrors of war, Gaza's children struggle to heal

Amid lack of a political solution, resilience is the only shield available to young Gazans coping with the effects of trauma 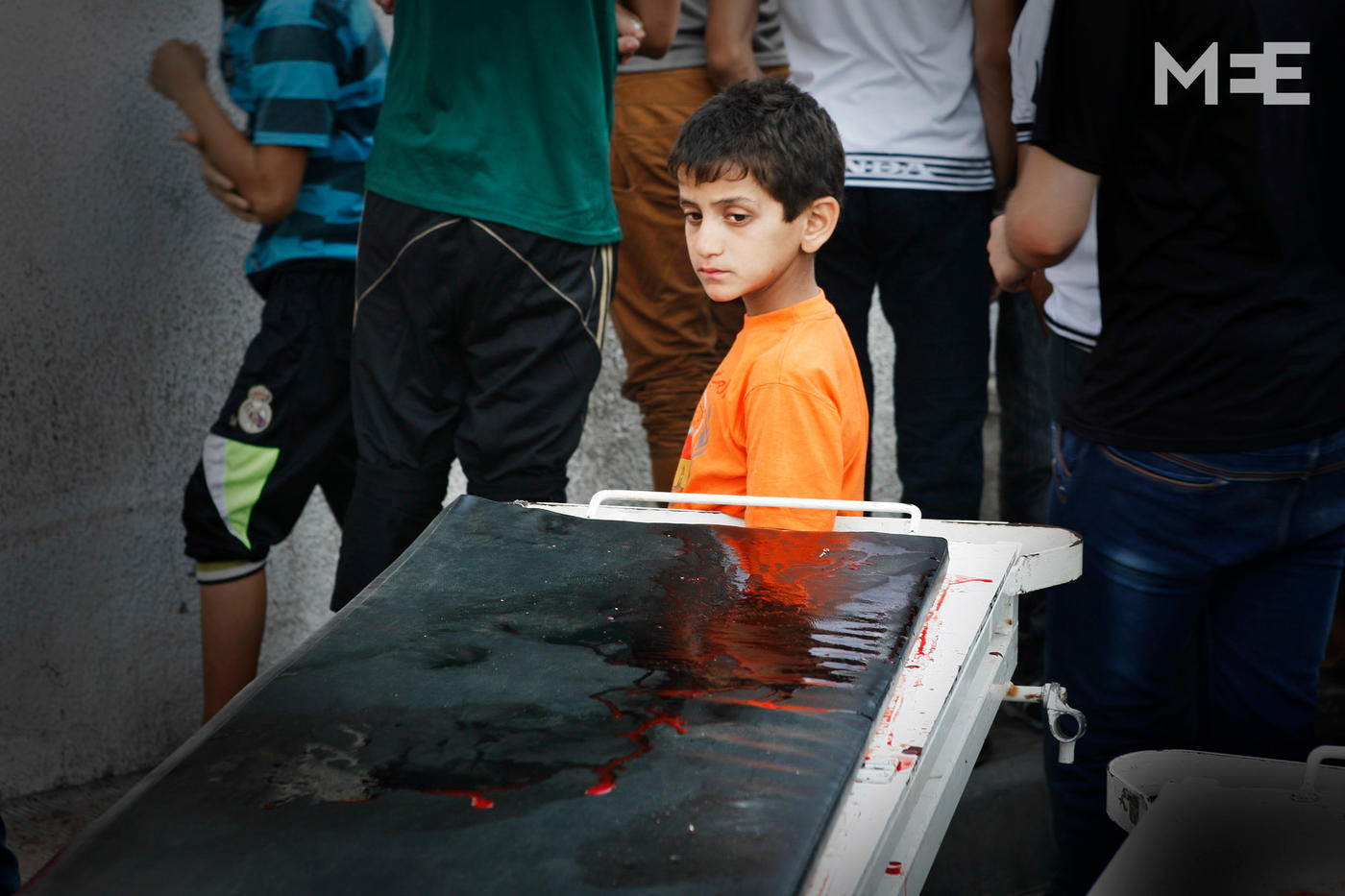 GAZA - Mohammed* has a bruise on his chin. "He took a lighter and burnt himself," his mother told MEE in exasperation as she tilted her son's head up for inspection. "I don't understand how he can hurt himself like this, he never did this sort of thing before." Mohammed is an eight-year-old boy from the Jabalia refugee camp, in the north of the Gaza Strip.

He sits, quiet, on the thin mattresses laid on the floor of the living room in the family home. He is nestled against his father's legs, his deep black eyes trained on the plastic carpet underneath his small feet.

Around him, his parents' words erupt like a flash flood, rushed and unexpected. In 10 seconds they fill the room with painful memories of blood, mutilated bodies and bombings; memories that will likely linger for days.

The room's serene pale-pink walls, decorated with a silver flower motif, violently clash with the crude gesture of a hand slicing an imaginary body in two; the body of Mohammed's uncle, brutally cut in half by an Israeli missile.

Mohammed winces, as if trying to fight a thought insinuating itself in his brain, an area of his body that sometimes eludes his control. At just eight-years old, he is a veteran of three wars and during the last one he witnessed more horror than most could bear in a lifetime. Shortly after, he was diagnosed with post-traumatic stress disorder (PTSD).

Everyone wants the old Mohammed back. "He was sweet and shy," his mother recalls wistfully. Instead, one and half years after that war, the family and Mohammed himself are learning to cope with a very different child; one who needs medication to function, has night terrors, violent outbursts against his siblings and classmates and who recently began self-harming.

A study carried out by the Gaza Community Mental Health Programme (GCMHP) and published in July 2015, estimated that a year after the war the majority of Gazan children - 51 percent - were still suffering from the effects of PTSD.

According to mental health professionals in the strip, although alarming, this is only to be expected. The unstable political context, the ongoing siege, the worsening economic situation and the lack of basic protection, mean that even during times of relative peace, the causes of trauma are never fully removed, making talk of "recovery", or of "post" traumatic stress, futile.

"Through the years, entire families have been subjected to different types of trauma, from torture and arrests, to invasions and bombings," he continued, adding a generational perspective to the problem.

"In the Gaza Strip we are in the unique position of dealing with the effects of trauma while the trauma is ongoing," he explained. "We can never guarantee that the last air strike will definitely be the last one and, as you see, the siege hasn't ended, therefore 'post' doesn't really apply here."

What GCMHP seeks to do with Mohammed and thousands of children like him, is "build resilience", Zeyada explains, both through therapy and through a community-based approach that sees social, cultural and religious institutions involved in supporting and accepting those with mental health issues.

The fact that recovery may never be fully achieved poses some ethical questions. "We must ask ourselves if we aren't just preparing people to withstand the next Israeli operation," posits Zeyada, conceding that the attacks won't stop until a political solution is reached, Israel is held accountable and human rights are extended to all Palestinians.

Gazans talk of the 2014 war as the one in which no-one was safe. Israeli forces wiped out entire families, targeted homes with people still inside, bombed schools and mosques. The feeling was that everyone was a walking target.

At the height of the war, the UNRWA Girls' Elementary School in Jabalia offered shelter to some 3,300 displaced people.  When Israel hit the building on 30 July 2014, the shells hissed unannounced through the early morning silence killing sleeping men, women and children. Twenty died and around a hundred were injured. Amongst the dead was Mohammed's uncle.

He had moved his family to the school from the border city of Beit Hanoun after the Israeli air force dropped leaflets warning residents to evacuate or face likely death. "It was a massacre," Mohammed's father recounted to MEE.

Shortly after, UNRWA commissioner general, Pierre Krahenbuhl, told the press "today the world stands disgraced". By the time Israel's army spokesman, Colonel Peter Lerner, was on TV blaming Hamas for forcing Israel to kill civilians, Mohammed and his father were hurrying to the Jabalia hospital to look for the uncle.

Only two weeks earlier, Mohammed had experienced the shocking confusion of a bombing site. A neighbour's home was hit by a missile while he was alone outside. He fell to the ground and as the crowd rushed to the to look for survivors, he was trampled, sustaining injuries to his arm and head.

In the mayhem of the Jabalia hospital, he held on tightly to his father's hand. Bodies and body parts were strewn across the ground, the morgue was overflowing and there were no more fridges. It was summer, the putrid stench of rotting flesh was nauseous and the blood was everywhere.

Dragged along by his father, Mohammed's small feet stepped on several corpses before they found the missing uncle. Shrapnel had laid waste to his body, which lay decapitated.

Dealing with the aftermath

It was on that day that Mohammed changed. He told his father that he felt as if there was blood all around him, seeping in from everywhere, that he couldn't get the smell of that blood out of his nostrils. He felt a constant need to throw up.

His mother remembers Mohammed's screams at his uncle's funeral. "I don't want to die, I want to stay alive," he shouted, as he clung onto her skirt. They couldn't recognise this child, and they didn't know how to make him feel better.

For Mohammed and his family, the 2014 war ended with an early morning Israeli strike on the home of their next-door neighbour. No one died, they say relieved, but as they lay in their beds, bits of their own home crumbled on top of them, lightly injuring the children. Shortly after, a long-term ceasefire came into effect.

They approached the GCMHP when at an outing organised by a local charity right after the war, Mohammed was overheard saying he wanted to bring a knife to school to kill a teacher.

Since then, he has been attending weekly one-hour sessions at the Gaza centre. In the playroom he talks with his therapist, draws and plays. His toys of choice are still weapons, he says. Coyly, he adds that he likes it at the centre because it's relaxing and he feels he can talk about anything.

His voice is feeble, his manner self-effacing, it is hard to imagine this boy threatening his siblings with a lighter or fighting with his classmates. And yet even with the regular therapy, his parents can't see any obvious improvements.

He still complains of a fierce pain in his legs, which is of psychosomatic origin, and even when there is a small positive step forward, an Israeli air strike, heavy rain or fireworks are enough to set him back to fearful and aggressive behaviour.

His parents can't remember the last time he slept in his bed for a whole night. "He sneaks in with us and we need to leave the light on or he won't fall asleep." Mohammed rocks forward to touch his feet, his voice barely audible. He feels safer sleeping next to his parents in the big bed, he says in barely a whisper.

And of the future..

Despite the uncertainty enveloping daily life in the strip and the lack of a political situation that could enable his recovery, this eight-year-old still has the strength to look ahead and imagine himself as an adult. He wants to be a doctor, he says. This resilience is something he shares with most Gazans.

"Israel attempts to create a state of total helplessness," stated Zeyada. "It aims to create desperate people who blame themselves and who believe that their lives can never improve if they continue to resist the aggressor."

But, he argues, Palestinians are still resisting, struggling for their rights and this in itself is a psychological process that can help give meaning to the experience of loss and trauma.

(*Mohammed's name has been changed to protect his identity.)