How the legendary rescuer of Lesbos was accused of people-smuggling

Salam Aldeen never expected he would be saving lives in the Mediterranean, nor did he expect to be accused of human smuggling 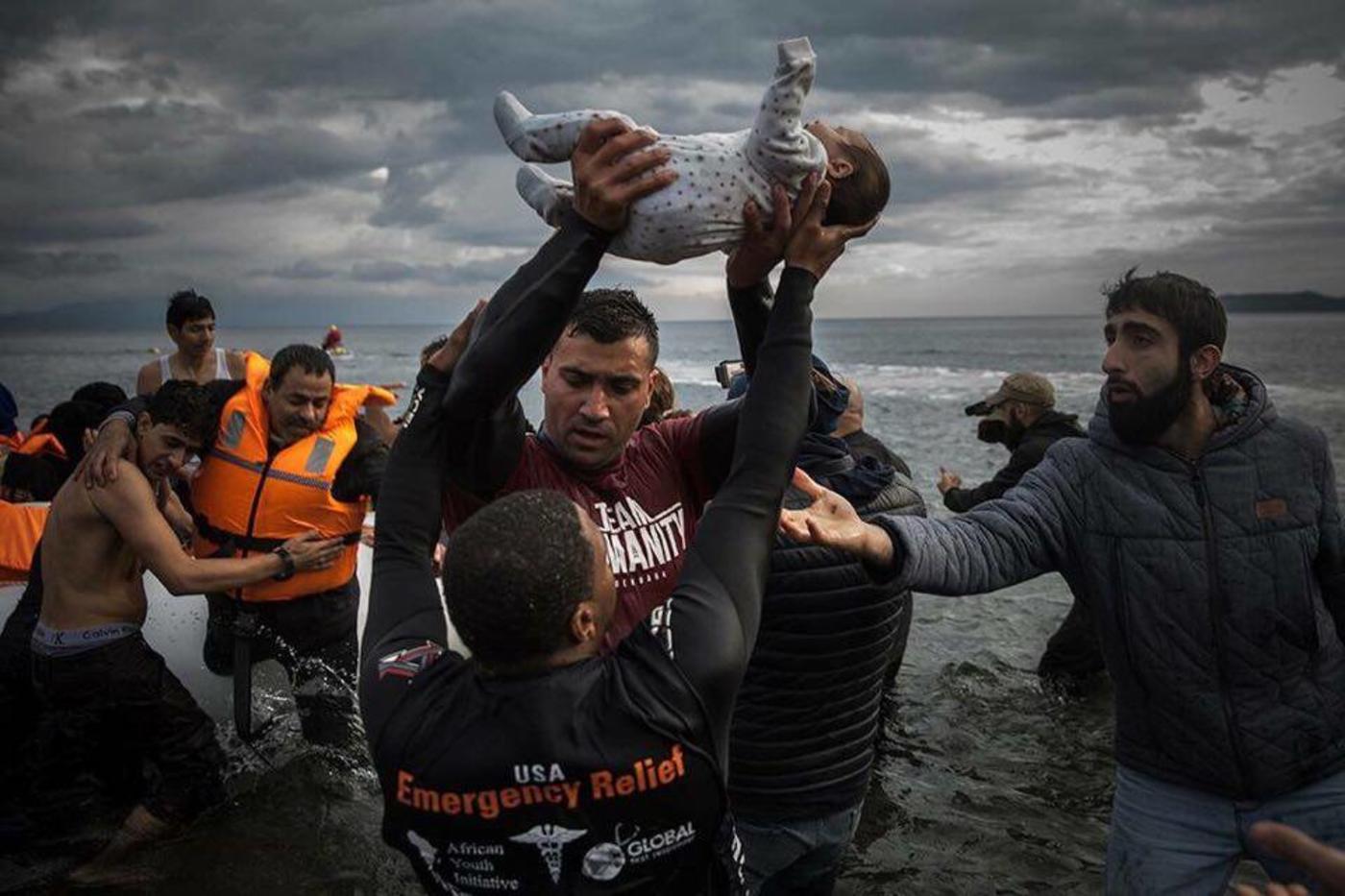 THESSALONIKI, Greece - Salam Aldeen never trained as a lifeguard, nor had he ever swam 500 metres into a stormy sea before, but when he saw an overcrowded dinghy sinking off the coast of the Greek island of Lesbos last winter, he did not think twice before diving into the freezing water.

“First I started swimming like this,” the 34-year-old from Denmark says, making small crawl-stroke motions with his hands. “Then like this, he says,” switching to the breaststroke.

“Then on my back - you know, relaxing,” he laughs.

Once he reached the boat, he found an apocalyptic scene playing out before him of 60 desperate people crouched together, screaming for help as water rushed in over the edges of the boat.

Eager to reach Greece as soon as possible, the passengers had hastily glued the motor to the back of the small dinghy - neglecting to let the glue dry. Though the haphazardly constructed boat lasted most of the 10 kilometre journey across the Aegean Sea, the motor began to dislodge only a few hundred metres off the coast of Lesbos. Water was rushing into the bottom of the boat, as dozens of panicking people screamed, certain they were going to die.

“I saw a woman and her child - a baby - and she was holding him up above the water,” he says, recounting the events of that night. “She was screaming, 'Help us! Help us!'”

'I saw a woman and her child - a baby - and she was holding him up above the water. She was screaming, 'Help us! Help us!''

As the boat sank, Salam took a leap of faith and told the refugees to "get into the water, hold onto the boat, and paddle to shore".

"I told them to paddle with their feet, and I said that I would help push and steer the boat from the back,” he continued. “And we did it! We got the boat to shore.”

From Denmark to Team Humanity

Back in Denmark, Aldeen had been an aspiring businessman. He had big plans with a few friends to start companies, open restaurants - and hopefully make some money. Things changed however, when he helped a friend sort through clothes to be sent to refugees arriving in Greece. He started researching the ongoing crisis and on his 33rd birthday he decided to fly to Lesbos to see if he could help.

Aside from one trip home to recruit more volunteers - which eventually became a small, donation-run NGO named Team Humanity - he never looked back.

It did not take long for Aldeen to become an island legend. As an almost native Arabic speaker - his father is originally Iraqi, subsequently acquiring Danish nationality - he easily made refugees feel comfortable with him, and they trusted him with their lives.

e worked tirelessly, both in the camps and in the sea. Eventually, he got his own boat to facilitate his and the other volunteer lifeguards’ rescue efforts.

He became famous on social media. Refugees already knew who he was when he came to their rescue after watching videos of him on Facebook before they travelled.

When he tries to count the number of people he has pulled from boats, or boats he pulled to shore, he cannot. The number is quite literally countless.

From hero to villain

One night in January, everything changed. In the early hours of the morning, Aldeen phone buzzed with a WhatsApp message posted in the group South Lesbos Volunteers, where most volunteers communicate. Two boats were sinking, "please help!"

In what had become a routine, he jumped out of bed, called the other rescuers, coordinated with the Hellenic coastguard, and rushed to his small boat, depending on only a WhatsApp location pin to locate the boat in distress.

“We were panicking, we couldn’t find the boat,” he recalls. The WhatsApp location pin - which could change at any minute - was their only clue for the approximate location. After a while, a small coastguard ship began to follow them, and told them to cut their engines and to stop searching for the boat.

“I told them there were two boats sinking,” he continues. “They told me to shut up.”

The coastguard boat then instructed Aldeen to follow them to shore, and took them to the port authority. Once at the port, Aldeen and the other four rescuers aboard were arrested on charges of human smuggling.

As the driver and owner of the boat, Aldeen faced harsher punishment than the other rescuers. While four other rescuers were given a bail set at 5000 euros, his was set at 10,000 euros.

Most importantly, he was barred from leaving the country. While the other lifeguards are able to travel, and go home, Aldeen is forbidden from leaving Greece, and has to check into a police station every week.

While Aldeen and the other volunteer lifeguards routinely found themselves in crisis situations where they were forced to think quickly, they were careful to follow the rules of the Greek authorities.

On that night they had alerted the Greek authorities - including informing, and coordinating with the Hellenic Coast Guard about the sinking boat - in order to coordinate the rescue. But they could not answer on its exact location. Volunteer rescue operations, so long as they take place in Greek waters, are legal.

As Aldeen boat rushed towards the vessel in distress, the Hellenic Coast Guard had begun to pursue their boat, and, though they never intended to stray into Turkish waters nor did they, they were arrested for supposedly having the intent to illegally move people across borders; also known as human smuggling.

“If the authorities thought that they really were trying to smuggle anyone, all the volunteers on the south part of this island who were part of the WhatsApp group - where the call that a boat needed to be rescued immediately was posted - would be defendants now,” Electra-Leda Koutra, Aldeen defence attorney told Middle East Eye, arguing that the Hellenic Coast Guard’s reasoning could implicate anyone coordinating rescue operations and humanitarian activities, in addition to the lifeguards.

'My life has changed forever'

Unable to leave Greece and with little work left on the island - since the passage of the EU-Turkey deal in April severely reduced the arrivals of new boats - Aldeen moved to the outskirts of Thessaloniki, in northern Greece.

Now he mainly works in the camps along the Macedonian border where more than 50,000 refugees have been stranded for months, waiting for news of family reunification, asylum, or any means of continuing their journeys.

Aldeen helps the camp residents arrange and translate everything from asylum appointments to hospital visits, and is constantly coordinating aid deliveries, with donations still trickling in to Team Humanity. But the combination of the miserable status quo of the crisis and his own personal experiences is clearly taking a toll.

“Really, I’m tired,” he says from a small couch in his dark, sparsely decorated living room. After witnessing several instances of gang violence in one of the most neglected refugee camps, he rented an 11-bedroom flat, and took in some of the most vulnerable families - mostly elderly, or pregnant women. His landlord cut him a deal and has been understanding and hospitable to the refugees.

While Aldeen has made sure that each refugee family’s room is decorated like a small home, he himself lives spartanly - sleeping in a single bed, surrounded by boxes of food, and supplies to be delivered to the camps the next day. With no family, and only a few friends still in Greece, he is eager to go home, even if only for a visit.

“I need a break. I want to go home and see my family - at least for a little bit,” he continues, taking a moment to ask one of the refugees whether or not there was enough food in the house to feed everyone.

“But I can’t stop now,” he sighs, smiling. “My life has changed forever.”